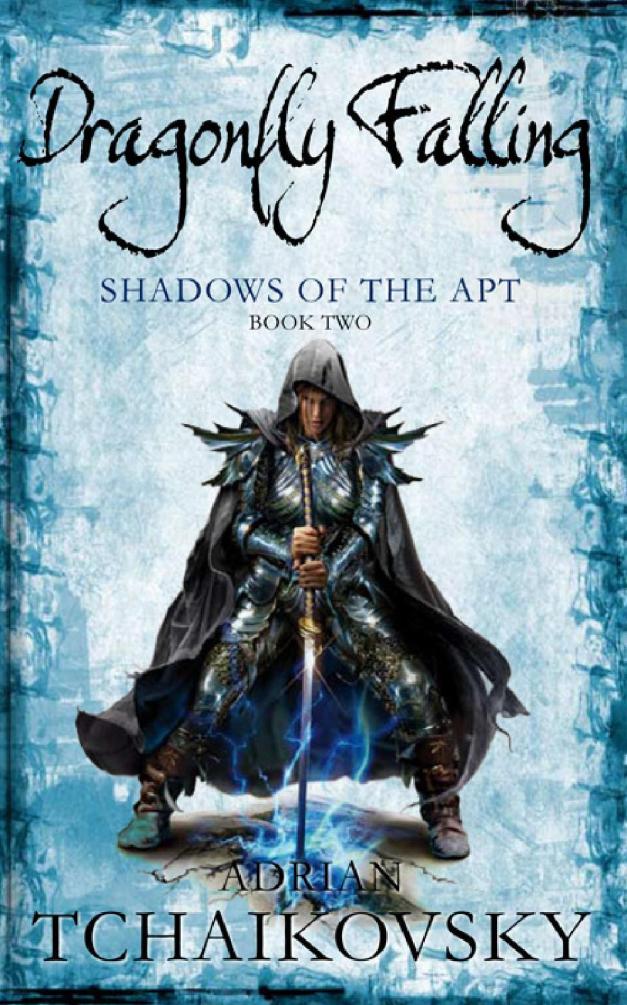 Shadows of the Apt Book 2 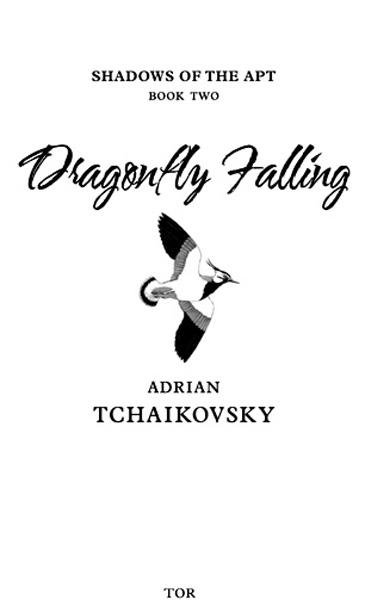 A very big thank you to
everyone who’s encouraged and helped me over the last year, including Simon;
Peter and the folks at Macmillan; Al, Andy, Emmy-Lou and Paul; the Deadliners
writing group; and all the folks at Maelstrom and Curious Pastimes. 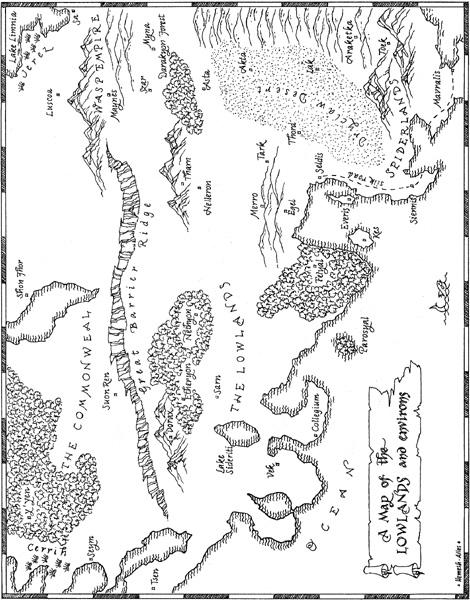 Balkus
Ant-kinden, agent of Scuto, renegade from the city of Sarn

The
Commonweal
Dragonfly-kinden state north of the Lowlands, partly
conquered by the Empire

The
Darakyon
forest, formerly a Mantis stronghold, now haunted and avoided
by all

Assembly
the elected ruling body of Collegium, meeting in the Amphiophos

Great
College
in Collegium, the cultural heart of the Lowlands

For
many years the Wasp Empire has been expanding, warring on its neighbours and
enslaving them. Having concluded its Twelve-Year War against the Dragonfly
Commonweal, the Wasps have now turned their eyes towards the divided Lowlands.

Stenwold
Maker realized the truth of the Empire’s power when it seized the distant city
of Myna. Since then he has been sending out covert agents to track the progress
of an enemy whose threat his fellow citizens will not recognize.

Among
these agents are his niece Cheerwell, his ward Tynisa, the exotic Dragonfly
prince Salma, a humble half-breed artificer Totho . . . and staunchest of his
allies is the terrifying Mantis warrior Tisamon.

But
can their efforts bring the Lowlands to their senses before it is all too late?

The morning was joyless
for him, as mornings always were. He arose from silks and bee-fur and felt on
his skin the insidious cold that these rooms only shook off for a scant month
or two in the heart of summer.

He wondered whether he
could be accommodated somewhere else – as he had wondered countless times
before – and knew that it would not do. It would be, in some unspecified way,
disloyal
. He was a prisoner of his own public image.
Besides, these rooms had some advantages. No windows, for one. The sun came in
through shafts set into the ceiling, three dozen of them and each too small for
even the most limber Fly-kinden assassin to sneak through. He had been told
that the effect of this fragmented light was beautiful, although he saw beauty
in few things, and none at all in architecture.

His people had been
building these ziggurats as symbols of their leaders’ power since for ever, but
the style of building that had reached its apex here in the great palace at
Capitas had overreached itself. The northern hill-tribes, left behind by the
sword of progress, still had their stepped pyramids atop the mounds of their
hill forts. The design had changed little, only the scale, so that he, who
ought to expect all things as he wanted, was entombed in a grotesque, overgrown
edifice which never truly warmed at its core.

He slung on a gown,
trimmed with the fur of three hundred moths. There were guards stationed
outside his door, he knew, and they were for his own protection, but he felt
sometimes that they were really his jailers, and that the servants now entering
were merely here to torment him. He could have them killed at a word, of
course, and he needed to give no reason for it, but he had tried to amuse
himself in such capricious ways before and found no real joy in it. What was
the point in having the wretches killed, when there were always yet more, an
inexhaustible legion of them, world without end? What a depressing prospect:
that a man could wade neck-deep in the blood of his servants, and there would still
be men and women ready to enter his service more numerous than the motes of
dust dancing in the shafts of sunlight from above.

His father had taken no
joy in the rank and power that was his. His father had run through life, never
taking time to stop, to look, to think. He had been born with a sword in his
hand, if you believed the stories, and with destiny like an invisible crown
about his brow. The man in the fur-lined gown knew what that felt like. It felt
like a vice around the forehead forbidding him rest or peace.

His father had died
eight years ago. No assassin’s blade, no poison, no battle wound or lancing
arrow. He had just fallen ill, all of a sudden, and a tenday later he just
stopped, like a clock, and neither doctor nor artificer could wind him up
again. His father had died, and in the tenday before, and the tenday after, all
of his father’s children bar two, all of this man’s siblings bar one, had died
also. They had died by public execution or covert murder, for good reason or
for no reason other than that the succession, his succession, must be
undisputed. He was the eldest son, but he knew that the right of primogeniture
ran thin where lordly ambitions were concerned. He had spared one sister only,
the youngest. She had been eight years old then, and something had failed in
him when they presented him with the death warrant to sign. She was sixteen
now, and she looked at him always with the carefully bland adoration of a
subject, but he feared the thoughts that swam behind that gaze, feared them
enough to wake, sweat-sodden, when even dreaming of them.

And the order lay before
him still, to have her removed, the one other remaining member of his
bloodline. As soon as he had a true-blood son of his own it would be done. He
would take no pleasure in it, no more than he would take in the fathering. He
understood his own father’s life now, whose shadow he raced to outreach. Yet
how envied he was! How his generals and courtiers and advisers cursed their
luck, that he should sit where he did, and not they. Yet they could not know
that, from the seat of a throne, the whole weighty ziggurat of state was turned
on its point, and the entire hegemony’s weight from the broad base of the
numberless slaves, through the subject peoples and all the ranks of the army to
the generals, was balanced solely upon him. He represented their hope and their
inspiration, and their expectations were loaded upon him.

The servants who washed
and dressed him were all of the true race. At the heart of a culture built on
slavery there were few outlander slaves permitted in the palace, for who among
them could be trusted? Besides, even the most menial tasks were counted an
honour when performed for
him
. Of foreign slaves,
there were only a handful of advisers, sages, artificers and others whose
skills recommended them beyond the lowly stain of their blood, and though they
were slaves they lived like princes while they were still of use to him.

His advisers, yes. He
was to speak with his advisers later. Before that there were matters of state
to attend to. Always the chains of office dragged him down.

Robed now as befitted
his station, his brow bound with gold and ebony, His Imperial Majesty Alvdan
the Second, lord of the Wasp Empire, prepared to reascend his throne.

The Emperor kept many
advisers and every tenday he met with them all, a chance for them to speak on
whatever subject they felt would best serve himself and his Empire. It was his
father’s custom too, a part of that clamorous, ever-running life of his that
had taken him early to his grave as the Empire’s greatest slave and not its
master. This generation’s Alvdan would gladly have done without it, but it was
as much a part of the Emperor as were the throne and the crown and he could not
cut it from him.

The individual advisers
were another matter. Each ten-day the faces might be different, some removed by
his own orders, others by his loyal men of the Rekef. Some of his advisers were
Rekef themselves, but he was pleased to note that this was no shield against
either his displeasure or that of his subordinates.

Some of the advisers
were slaves, another long tradition, for the Empire always made the best use of
its resources. Scholarly men from conquered cities were often dragged to
Capitas simply for the contents of their minds. Some prospered, as much as any
slave could in this Empire, and better than many free men did. Others failed
and fell. There were always more.

His council, thus
gathered, would be the usual tedious mix. There would be one or two
Woodlouse-kinden with their long and mournful grey faces, professing wisdom and
counselling caution; there would be several Beetles, merchants or artificers;
perhaps some oddity, like a Spider-kinden from the far south, a blank-eyed Moth
or similar; and the locals, of course: Wasp-kinden from the Rekef, from the
army, diplomats, Consortium factors, members of high-placed families and even
maverick adventurers. And they would all have counsel to offer, and it would
serve them more often than not if he followed it.