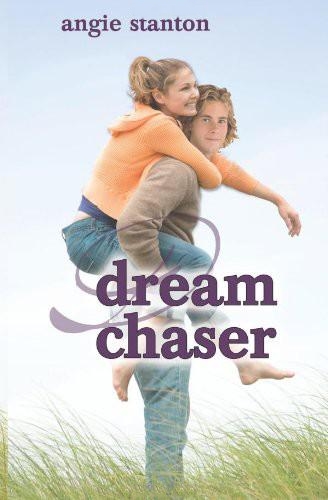 This
ebook
is licensed for your personal enjoyment only.
This
ebook
may not be re-sold or given away to other people.
Thank you for respecting the hard work of this author.

Other books by Angie Stanton

Rock and a Hard Place

Your humor, kindness and generous spirit will stay with me forever
.

“Give me everything you got!” I urged.

“Alright, Fearless Wonder. Whatever you want.” Kyle grinned, eager to launch me skyward before Coach came back.

“Willow, are you sure you want to try this? It's like the most illegal stunt on the planet! You'd never be allowed to do a toss with four twists in competition,” said Jilly, my best friend.

“Positive. Come on guys, let's go.” The rest of the cheerleading squad watched as the guys set their arms in load position. I placed one hand on Rick's shoulder and the other on Kyle's.

“Oh my god, are you sure?” Jilly said, from her spotting position.

“No guts, no glory! Ready when you are,” I said to the guys and stepped on their hands, and balanced in a crouched position.

I loved flying more than pretty much anything. The rush of adrenaline and the fast flips and turns were my addiction. I especially loved the sensation of the free fall and the whoosh as my bases would cradle catch me in their arms.

“One, two,” Kyle called, and they dipped with each count. On three, with their combined power, they launched me skyward, and I pushed off with my legs to get the ultimate height. Like a bullet I shot up, kicked and then twisted my body as fast as possible, once, twice. Gravity took over and I twisted two more rotations as I free fell back toward the cradled arms of my bases.

And then something went wrong.

Turns out it that it’s true
—
when you think you’re about to die, everything moves in slow motion. Like that commercial where a kid spills a glass of grape juice and the housewife moves in slow motion across the room to stop the mess before it splatters on her pristine beige carpet. But the juice splatters on the carpet anyhow, just like I hit the mat.
I heard a
loud pop as my body slammed into the mat. My world went dark.

I lay staring at the bright overhead lights of the emergency room as reality set in. A bulky brace was wrapped around my neck. I couldn’t even tilt my head to look down at my feet. The doctors and nurses at St. Mary’s Hospital must have thought I was in trouble too. They’d stuck wires on me for a heart test the second I arrived, and then, when satisfied my heart wouldn’t quit, whisked me away for x-rays.

I focused on the ceiling tile and tried to remember what happened.

One moment I was flying high above the team, the next my
catchers
made a botched attempt to save my landing. My body slammed at an awkward angle to the safety mat.

I squinted as the lights shone down and made me the star of the wrong show. The piercing pain in my shoulder and the constant blip of machines reminded me I lived. Every few minutes the blood pressure cuff threatened to squeeze off my arm as it tightened to take a reading. Another torture device pinched at my finger.

“How are you doing, Willow? Okay?” A nurse wearing a lavender smock asked as she entered data into a computer attached to the wall. She caught my eye and smiled. “You have some very worried friends who’d like to see you. Would you like me to bring them in?”

“Oh, I guess.” My head felt foggy and my ears seemed to hear echoes as if I’d taken strong meds. “Did you put something in my I.V.?”

“Nope, no meds. Not until the doctor knows what’s going on and gives the okay.”

I tried to look to the side, but pain and the brace stopped me. “Are my mom or dad here yet?” I shivered in the flimsy hospital gown. Normally, I didn’t need my parents around, but this was different. I felt off and couldn’t put my finger on why.

“Cold? Let me get you a warm blanket. Your dad is on his way. I’m not sure about your mom.” She pulled a blanket out of a warming cabinet and spread it over me. “I’ll send your friends in.” She pulled the curtain closed and left.

I shifted under the covers to reach the bed controller. Pain shot through my shoulder and upper back, and sent me flat again.

“Oh my
god, Willow, are
you okay?” Jilly rushed to my side. She peered down, her eyes swollen from a recent cry. Her thick red hair framed her worried face as she took my hand.

“Yeah, I think so,” I said, but I really didn’t know. It was so good to have her by my side, but weird to be in a hospital bed.

“We were so worried.” Rick gripped the bedrail and wrinkled his forehead in concern.

“Don't be. It wasn’t your fault. I pushed you guys to let me try it.” I knew better than to experiment with such hard tricks, but I had been so sure I could nail a quad. I thought I actually had. Until I hit the mat.

“You scared us to death!” Jilly said. “You were just lying on the floor kind of twisted up. Everyone was totally freaking out!” She bit her lip. “They’re all in the waiting room. The nurse said only two at a time.”

The idea of the team waiting to hear how I was doing was kind of embarrassing but not a surprise. What affected one of us affected all of us. That’s what our coach, Ms.
Klahn
, always drilled into us. Our squad had plenty of close calls before, but never one that included an ambulance ride.

My shoulder throbbed more than ever. It better be okay; we had a huge competition coming up and I couldn’t miss it.

At that moment, the curtain pulled back, and my dad appeared with my little sister, Breezy.

“Willow, honey, how
ya
doing?” His worried expression touched my heart.

“Dad.” My voice broke a little. I hadn’t realized how much I needed to see him; a weight lifted from my injured shoulder.

He approached the bed and patted my leg. That small contact brought my anxiety down a couple notches. He fixed me with one of his meditative Buddha gazes. Dad believes he can solve just about anything with a calming look, a deep breath and a cup of tea. This time I welcomed it.

“Her flight arrives at eight, and she’s coming straight here,” he said.

“My, we’ve got a full house in here.” A towering older man in a white coat walked in. “Hello, I’m Doctor Tyler. You must be
Willow
.”

“Yes.” I straightened in the bed. “This is my dad.” I gestured to my ponytailed father.

“And these must be friends.” The doctor nodded toward Jilly and Rick.

“Yes, they were there when I fell. And this is my sister Breezy.” Her round eyes stared mesmerized at the jagging lines on the heart monitor.

The doctor took his stethoscope from around his neck and placed it in his ears. “Mind if I take a little
listen
?”

I nodded and he listened to my heart and lungs through the thin gown.

“Are you able to sit up so I can listen from the back?”

“I think so.” I tried to sit up. A sharp pain shot through my shoulder, and I let out an embarrassing yelp.
A sheen
of perspiration dampened my forehead as I fell back to the bed.

“Well that’s not good. Tell me what happened to bring you in today.”

I wiped my uninjured arm across my face to hide the welling tears. Reality and pain were sinking in. “I’m not exactly sure. We were practicing a stunt.”

“Oh, sorry, cheerleading. We’re getting ready for
Regionals
and were playing around.”

Screwing around was more like it, but I didn’t want to admit that.

“Anyway, we were lined up, and everything seemed normal during the
toss
. It wasn’t until the
catch
that I realized something was off, but by then it was too late.” I shuddered, which sent pain down my arm as I remembered that instant.

Rick spoke up. “One second everything was fine, and the next she was coming at us head first.” He cast me a pained look. “We tried to catch her, but it was too late. She landed kind of shoulder and head first and at an angle. Kyle tried to throw his knee out to slow her fall.”

“So you’re one of those girls they flip in the air?” Doctor Tyler asked, ignoring the horrific accident description. He leaned against the wall.

“How high up do you go?” he asked, as if he were an excited fan and not my doctor.

“It depends, but usually about fifteen feet and on big stunts even more.”

“Yeah,” I said. “At least I used to. Now I’m not so sure.” I squirmed to find a more comfortable position.

“The truth is, you’re lucky you weren’t more seriously hurt.” His easy demeanor shifted and he addressed Jilly and Rick. “You’ll excuse us so I can go over the test results with Willow and her father.”

Jilly gave my hand a quick squeeze. “I’ll be in the waiting room until you can have visitors again.”

“Actually, you need to give Willow time to rest. She’ll be receiving some meds that will make her tired,” the doctor said.

“Hang in there,” Rick said as he followed Jilly out of the room.

Four days later and finally free of the brace that secured my whiplashed
neck,
I walked into the school atrium carrying my lunch tray with my book bag over one shoulder. This spot belongs to us, the Capitol City Flyers.

The atrium is the primo lunch hangout at
Capitol High School
. Even in the middle of February, the atrium stays bright and warm. The glass walls enclose lush gardens complete with trees and park-like walkways. Some elderly Senator had an affinity for the east side of Madison and donated millions to build our state-of-the-art school. The atrium is one of many perks. Our auditorium is another.

While my school brags several winning sports teams and clubs, the Flyers are the school’s crowning glory, the crème de la crème. The past three years we won state, and last year the National championships too. The Flyers received tons of media attention and pulled in huge donations to the school. That’s why we command the coveted atrium.