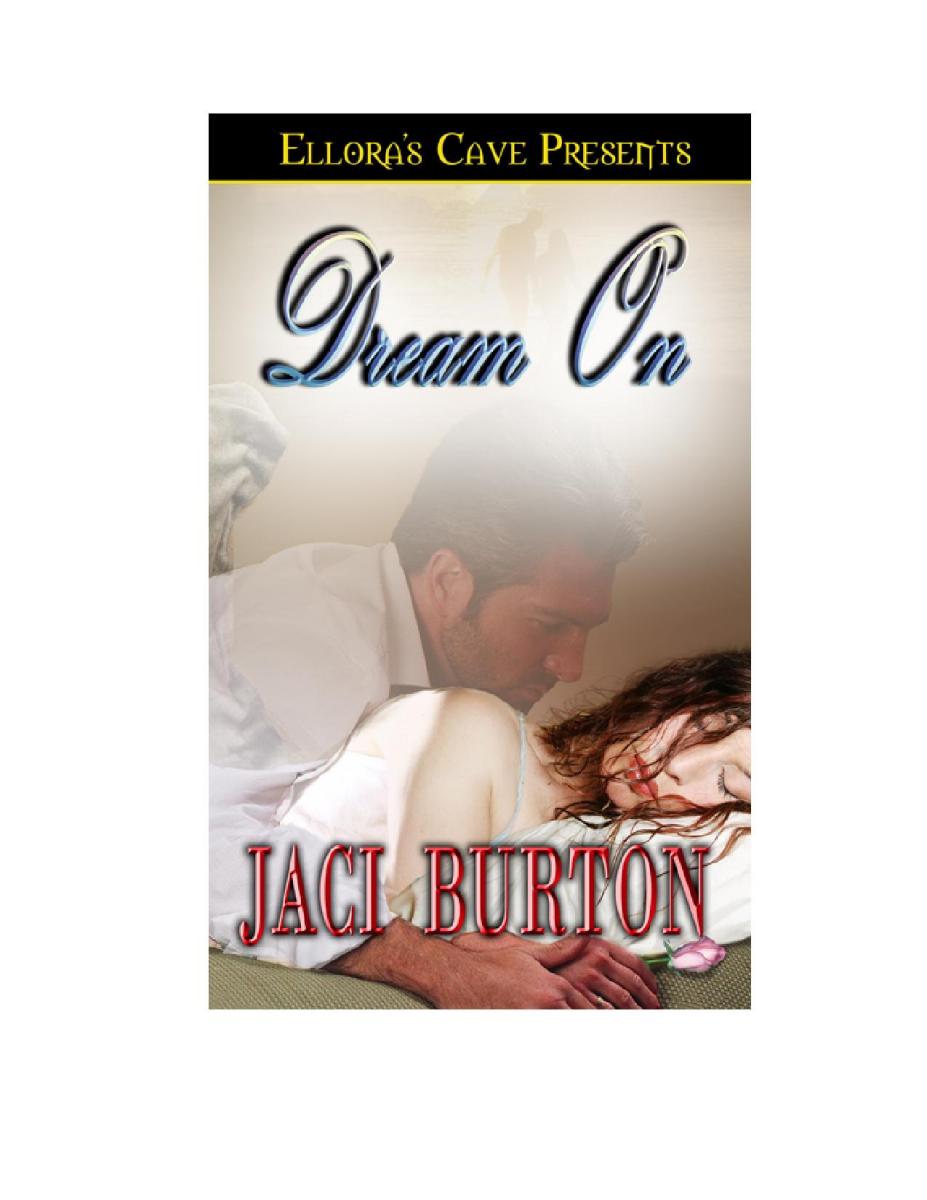 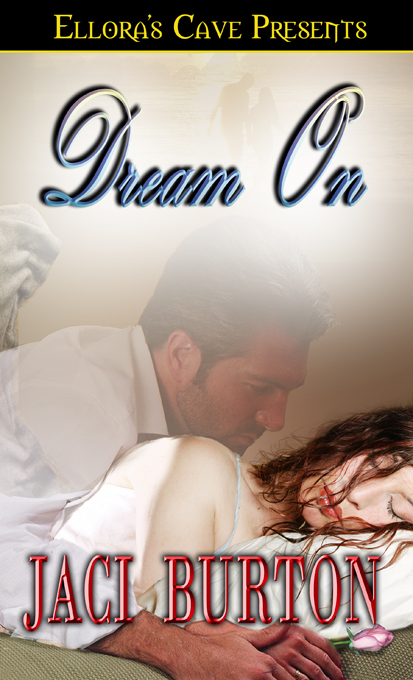 The following material contains graphic sexual content meant for mature readers.
Dream On
has been rated S-ensuous by a minimum of three independent reviewers.

S-
ensuous
love scenes are explicit and leave nothing to the imagination. E-
rotic
love scenes are explicit, leave nothing to the imagination, and are high in volume per the overall word count. In addition, some E-rated titles might contain fantasy material that some readers find objectionable, such as bondage, submission, same sex encounters, forced seductions, and so forth. E-rated titles are the most graphic titles we carry; it is common, for instance, for an author to use words such as

“fucking”, “cock”, “pussy”, and such within their work of literature. X-
treme
titles differ from E-rated titles only in plot premise and storyline execution. Unlike E-rated titles, stories designated with the letter X tend to contain controversial subject matter not for the faint of heart.

To Briana St. James, my wonderful editor. Thank you for helping me realize a lifelong dream.

To Charlie, the man of my dreams. You are my heart and my very soul. Without you, I would be forever lost. With you, I am whole. Thank you for making me believe that anything I dream can come true. I love you.

“We are such stuff

As dreams are made on…”

Kate stood outside on the porch and wrapped the quilt around her shoulders to ward off the chill of impending night. Dust filtered through the setting sun, coloring the lake a rusty orange. It was spring and the days were beginning to grow warmer, but at night when the sun went down so did the temperature. She shivered, grabbed her cup of tea and sat on the old wooden swing. As she rocked back and forth and watched the orange glow of the horizon, the memories slapped at her like flies at a summer picnic. Spring used to be Jack’s favorite time of year. During the rare occasions he had a weekend to spare, they’d travel out here to the country house and sit on the swing, talking about anything and everything. His job, the kids, what they wanted to do when they retired. They’d made so many plans together, counting the years until the kids were grown and off creating their own lives.

The kids were gone now. Problem was, so was Jack. Only his departure had been more abrupt. One day he was there, sharing his life with her, and the next he was gone. Without any warning, he’d disappeared from her life completely. Her mellow mood vanished in an instant, replaced instead by the cool chill that had permeated every day for the last five years. And all because of Jack. The sonofabitch. She’d go to her grave hating him for what he’d done. He’d made promises. Big promises about their future together, sucking her into his dreams so easily, only to shatter her illusions in one day. Now she was forty-five years old and alone, and all those things Jack had promised her for twenty years had meant nothing. They’d never enjoy making love in the middle of the day because the boys were no longer there to interrupt. They’d never sell their house in the city and retire here in their country house. They’d never grow old together. Empty words. Betrayal.

“You lied to me, Jack,” she whispered to the breeze swirling around her. “You promised me forever and you didn’t keep your part of the bargain. How could you do this to me? How could you make promises and not keep them?”

Swiping at the tears rolling down her cheeks, she summoned up the righteous anger that always made her feel better. Screw him! He’d left her after twenty years, destroying her dreams. She’d long ago vowed never to hurt over him again. Better to stay angry. Much more productive that way.

So why did she still dream about him at night? Why did his face, his touch, still haunt her?

Because you can’t let go.

She shook her head, refusing to dwell on him any longer. Jack was part of her past now and the house in the city was up for sale. One part of her memories would soon be gone. At least she still had the country house, even though it was way too quiet these days with the boys gone. Both Ron and J.J. were in college, but they came home as often as they could.

They worried about her, and she knew that. They tried to visit as often as possible and she knew it was because they were concerned about the amount of time she spent alone. But she fought them tooth and nail, insisting they make their own lives. The last thing she needed or wanted was her children acting as babysitters. She was fine alone. She’d even reached the point where she could spend weekends here at the country house like they all used to. Soon she’d live here full-time and could concentrate more on her writing. Being alone would be advantageous then. She could write undisturbed by city noise. Maybe she’d even be able to crank out one extra book a year this way. And occasionally, the boys could visit since the country house was closer to their school. They were supposed to be there this weekend, but she insisted they stay at school for the big game. Besides, the quiet solitude of the country would be good for her muse. Maybe she’d be able to finish that book this weekend. 7

She stood and headed into the house, locking the door and flipping the light switches off. She undressed and stood in front of the bathroom mirror, shaking her head at how much she’d aged in the past five years. Her face drooped like a basset hound’s, her hair hung long and stringy and the once shiny auburn strands looked oily and dirty. She’d gained at least fifteen pounds and felt every single one of them in her belly, thighs and butt.

“What the hell do I have to look good for, anyway?” she mused to her reflection. “I used to take care of myself, worked hard on my body and my appearance. Did it keep Jack in my life?”

The reflection shook its head.

“Exactly my point. No one sees me anyway.” And her sons loved her no matter how she looked, though they did suggest she get out more and away from her computer.

What they really meant was they thought she should find another man. The thought of dating anyone made her shudder in revulsion. Never again would she put her trust in a man, only to have her dreams of paradise ripped away when he didn’t live up to his promises.

She grabbed her pajamas and slipped them on, remembering the days she and Jack would slide under the cool sheets stark naked, using their bodies to warm each other. With a sigh she shut off the light and climbed into bed, staring out the window at the half moon shining overhead.

Her breasts ached and a tightness formed between her legs. Her clit throbbed, her pussy moistening at the memories of hot sex that went on all night long. She reached down, sliding her hand between her legs and resting the heel of her palm against her 8

clit. Pleasure burst inside her, but she quickly drew her hand away, refusing to give into the desire that seemed all too insistent these days. Orgasm would only make her wish for something she couldn’t have.

Sexual reawakening wasn’t what she needed right now. She’d long ago lost the urge to bring herself to orgasm, afraid the memories would wash over her and she’d end up hating Jack, and herself, for what they could have had together. So she fought back the urges, determined that her mind was stronger than her body and she didn’t need sex of any kind to feel fulfilled.

Disgusted by her unruly body, she flipped over onto her back and stared up at the ceiling. “Damn you, Jack, will I ever get over what you did?”

Maybe the boys were right and she should get out and start dating again. If she did, thoughts of Jack would dwindle until there was nothing left but vague memories. But could she really do that? Thoughts of having another man’s hands on her or another man seeing her naked made her physically ill. Jack was the only one who’d ever touched her, the only one she’d ever wanted to touch her. Could she actually take that step and start over again? She let the thought permeate her mind for a few minutes, but came up with no answers to her dilemma other than the same old feeling that she belonged to Jack and nobody else. That she’d never let another man touch her.

But was that fair? Why did she have to be punished because of what Jack did?

“Somebody please tell me what to do.” She laid there quietly for a few moments, but the darkness provided no answer. Not that she expected one. No one had answers or explanations for why Jack had left her. Only the standard diatribes of
these things
happen
and
no one can explain why
, or
give it time and
you’ll get over him
, and of course her favorite one of all…

With a disgusted sigh, she squeezed her eyes shut and refused to think anymore tonight.

Sleep, Kate. Turn your mind off. Maybe one day you’ll actually be able to get through an
entire day and not think about that bastard who left you
. Maybe one night she could sleep without the dreams haunting her. If only…

Kate pulled the covers over her shoulders and turned away from the offending voice. “Go away. I’m sleeping.”

Warm breath caressed her neck and goose bumps broke out on her skin when a hand touched her shoulder.

So used to him invading her dreams every night, she ignored the realistic sound of his voice. Why wouldn’t he just go away? How long would this torment continue? “Get lost, Jack.”

Something wasn’t right. This conversation didn’t
feel
dreamlike. It felt real. But that wasn’t possible. Jack didn’t live here anymore. He wouldn’t be here. No way. She was hallucinating, or so deep into the dream that it seemed like the real thing. Yet she’d dreamed of him every single night since he left and this wasn’t like all those times before. Her nightly sojourns had been more surreal, more distant. Though she saw him, touched him, made love with him over and over again, there was a definite lack of reality to her dreams. It was if she was observing her own body, watching the way he touched her and kissed her.

This was different. The covers moved down and she felt the chill of cold air on her skin. When the brush of warm fingers trailed down her arm, she knew what she felt was no dream.

Her heart lurched and she sat up, blinking back the sleep from her eyes. The room was dark, but she heard the soft inhalation of breath that wasn’t her own. She broke out into a sweat and fought to still the trembling of her body. Someone was in the room with her!

Too afraid to even swallow, she clutched the sheets and prayed to God one of her kids had come home for the weekend to surprise her.