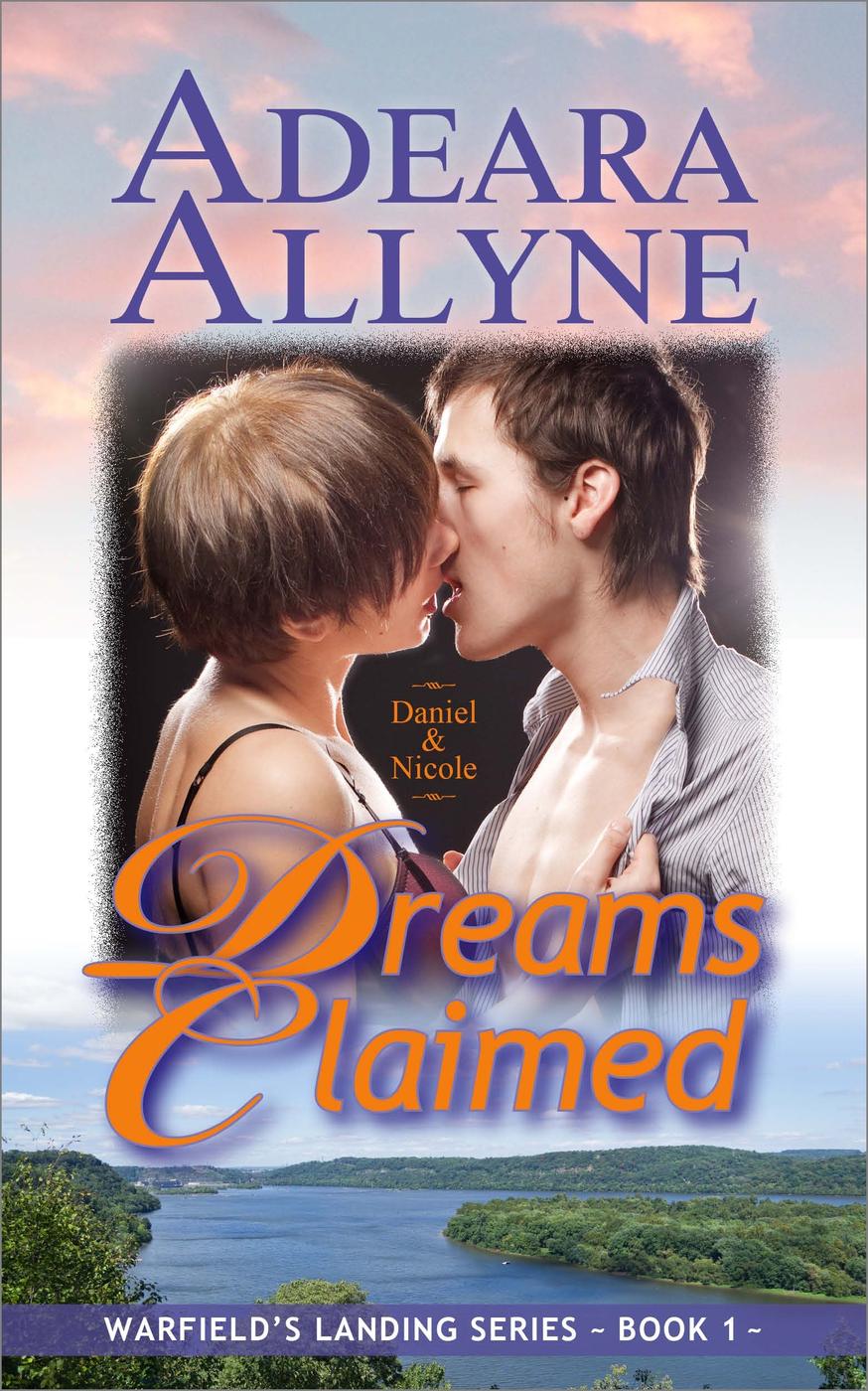 CHAPTER 6 | A few minutes later at the coffee shop

CHAPTER 9 | On the date with Daniel and Bentley

CHAPTER 18 | At the Board Meeting in Washington, DC

CHAPTER 19 | After the Board Meeting

CHAPTER 21 | The next week in Old Town Alexandria, VA

CHAPTER 22 | The next day in Old Town Alexandria, VA

CHAPTER 28 | The next morning in Warfield’s Landing, MD

CHAPTER 30 | The next day in Warfield’s Landing, MD

CHAPTER 31 | The morning after in Warfield’s Landing, MD

CHAPTER 33 | The next day in Warfield’s Landing, MD

Since the summer he was twelve, Daniel Sterling has had a clear image of his ideal woman. Now, at last, he sees her... on the Washington DC Metro — traveling in the opposite direction.

Once he finds her, she is everything he wants and more...

Rising artist Nic Bannerman isn’t looking for love. When she meets Daniel—he has dimples — call her shallow, but she’s willing to take a chance.

All too soon, outside events overtake them... her birth father’s bad choices, the frightening phone calls she’s been getting... and other unexpected complications.

They’re made for each other, but...

READER ADVISORY - This book has a mid-range heat level, along with the occasional S-bomb and F-bomb, and a really sweet Golden Retriever!

CHAPTER 1
22 years ago in New England

E
verything in his life had gone wrong since his mother left them. His father fought her for custody and won. Daniel wondered how any judge could think that his dad should take care of a kid.

“Shit.” The forbidden word had a presence. What was it about those four letters, spoken in that order? “Shit.” Daniel repeated it, and somehow, it relieved the pressure inside him.

Daniel lay on his back in bed, listening to the rain on the roof of his grandmother’s house. A breeze wafted in the window, bringing the earthy smell of wet soil.

The brief New England summer was ending. The nights were cool and his bare legs had goosebumps. His father had sent him here for the holidays. The reprieve was almost over. In three days, he was being shipped off to boarding school to start seventh grade.

He was still, trying to keep his mind empty. He was afraid of the new school, of having to live there all the time... and wondering when he’d see his Mom again.

Once he was sure that his grandmother was asleep, he rolled over on his side and reached between the old mattress and box spring. He’d hidden a small flashlight and THE magazine.

Daniel tugged the sheet and thin cotton blanket over his head to hide the glow and flipped on his stomach, the upper half of his body supported by his arms.

Careful not to damage the fragile pages, he looked at the images in the faint light of the battery powered torch.

The magazine was an issue dated in the 1950s. He suspected it was even older than his grandmother, who was OLD. The pages were yellowed and everything was black and white. No color pictures at all. And the cars... they were soooo weird.

But, what captivated him most were the portraits of a young actress — Audrey Hepburn. She was small and slender. Her dark hair was cut short, her dramatic eyebrows winged. He was fascinated.

He’d already figured out how to conceal the magazine in his suitcase. Probably his grandmother wouldn’t care if he took it, but he wasn’t willing to risk having her say no.

If he had to go to that horrible boarding school, he was taking Audrey with him.

CHAPTER 2
14 months ago in Washington, DC

N
ic looked around the mega expensive, obviously tasteful office and was happy that her best friends—Stevie and Karyn, had insisted she dress for the occasion.

The chic, little black dress was a departure for her. She spent most of her time in paint clothes — large white men’s shirts and black leggings, all sporting colorful paint streaks from wiping her brushes absentmindedly.

Today... no stains in sight.

Glen Conrad had been her birth father’s long time best friend. He was one of those men who had gotten more handsome as he aged, she guessed. He was tall with silver hair, impeccable custom made clothing, and a distinguished mien. He looked comfortable in his elegant office. Now the executor for her father’s estate, he ushered her into his office, a hand solicitously at her back.

“Thank you for coming by.” Glenn pulled a chair out for her, seating her facing his large desk and she looked at him over one shoulder.

“Did I have a choice?” She grinned at him.

He returned the smile. “No. No, you didn’t. These are legal matters related to your father’s estate.”

“I prefer to call him my birth father.” She knew her reply was cool, but she couldn’t help it. “I didn’t know him well... And I prefer to respect Frank Bannerman’s memory. He was my real father. My daddy.”

“Of course.” Glenn was gracious.

He took a seat behind his desk, opened a drawer, and withdrew a crisp white envelope. The elegant paper was thick and the name on the front handwritten. Scrawled artistically, the intense black ink made a strong visual statement.

He pushed the envelope across the empty desk.

She reached out and picked it up. She noticed him staring at her hand. He caught her interest and smiled, in acknowledgment.

Nic slid a finger under the seal. She pulled out the letter and placed the envelope on the table. Opening the letter, she read it once quickly, then a second time more slowly.

Nic felt the color drain from her face. She crumpled the heavy paper and tossed it to his desk, then sprang to her feet.

Unable to stop herself, she paced around the luxurious office. Glenn left the letter where she had thrown it and watched her without comment.

If things had been different... if her mother hadn’t disappeared from New York... if Max had known Evie was pregnant, if Max had been a part of Nicole’s life growing up, would Max have been less concerned about forcing her to do what he wanted now?

Now, Max — her birth father... who she hadn’t known until a few years ago, was giving her an ultimatum from the grave.

“Did you know about this?”

Max had told her a little about his relationship with her mother, long before her birth. Her mother, Evie, had been a young dancer breaking into the scene in New York. Evie and Maxfield Hayes — an up and coming artistic genius, had a secret romance. Max’s college buddy — Glenn Conrad, had been one of the few aware of the romance between them.

Max had told her this, but her mother hadn’t been around to ask for details. Nic understood that Max had likely given her an extremely one sided account of the relationship. Nic also suspected that Max had been obsessed with Evie, making his version even more questionable.

At their sudden and dramatic break-up, he left for Europe and Evie disappeared from New York. Max claimed that he had tried to find her months later, but there had been no trail to follow. The art world still wondered what had happened during that 12 month period, when Maxfield Hayes, normally prolific, had produced nothing.

Nic took a deep breath... she made a final circuit around the room, sat back in the chair on the other side of the broad antique desk and reached out a hand for the letter. With a grimace, she smoothed it on her lap. “I’m sorry, Glenn. I apologize for being a drama queen. This is such a shock.”

She waved the poor battered page. “Can he really do this? He can make his wife’s inheritance and the Maxfield Hayes Foundation funding contingent on me? I have to accept this or everything is given away to...” She checked the letter. “This organization. I’ve never heard of it.”

Glenn cleared his throat. “I believe it’s a hate group.”

She stared at him in disbelief.

“He wanted to be sure that you would accept the terms.” Glenn explained. Nic could see that this was distressing him, as well.

“Is there any way to fight this?”

“You could fight it, but everything would be made public. Courtney would not only lose the money, she would be publicly humiliated.”

Nic’s eyes narrowed in distress and she muttered several pithy sentences under her breath.

Realizing what she’d just said, she colored. This office, with its beautiful handpainted wallpaper was not the place to vent. She’d wait until she got back to see Karyn and Thomas. She started to apologize, but Glenn waved it away.