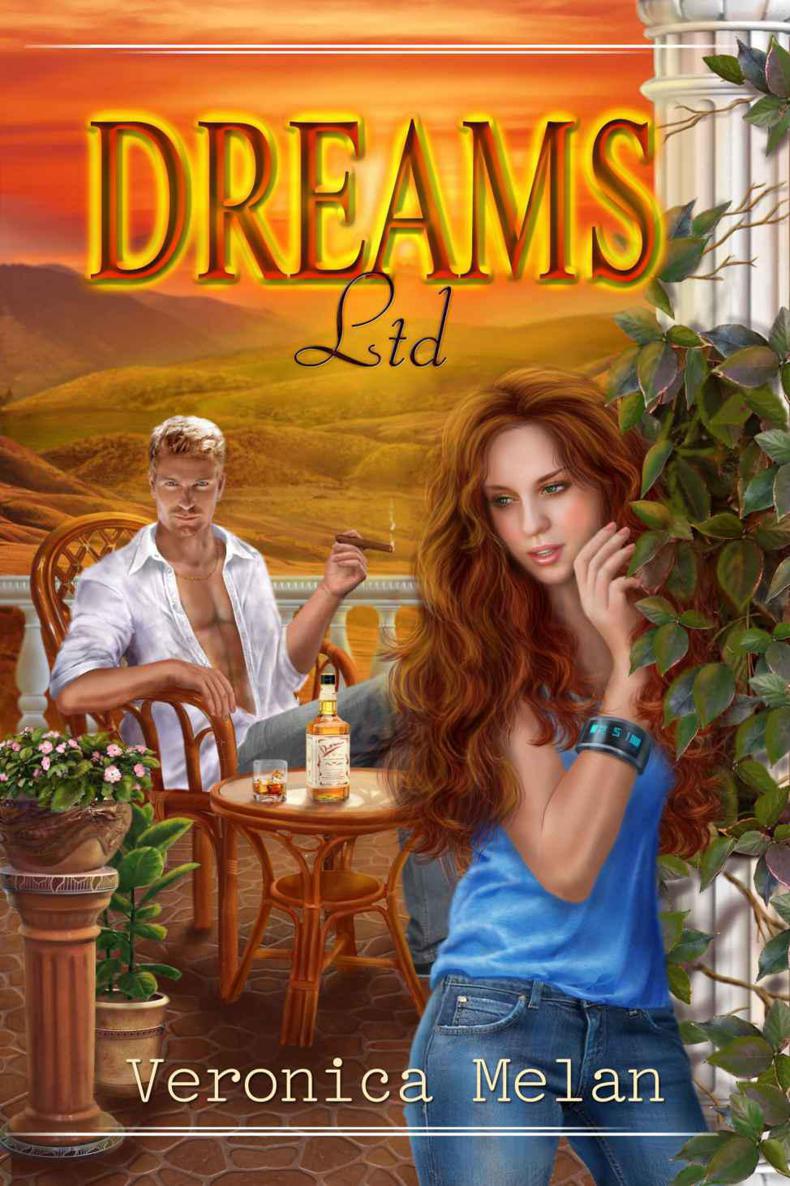 Dreams Ltd
Veronica Melan
From a sequel of novels “The City“.
CONTENT

A group of tall buildings standing on the right bank of the river Klendon had already absorbed most of the sun and now, only a scattering of orangey-red rays were beaming down the cottage roofs that spread out as far as the eye could see - from the bridge and up to the West Barton Avenue.

Cars, like restless insects were still ploughing the streets. Not as much as in the daytime now and traffic quietened down almost immediately after the Bank on the street corner had shut for the day. Most cars were parked by the “Lorian’s” cafe (“Fresh pastry – Desserts – Live music") and near the three-story glass shopping mall "Somerset ". Doors of the mall’s entrance were swinging open every now and then letting out the tardy shoppers with their colourful bags.

I moved away from the window and sat on the sofa. I aimlessly gazed from one object to another. There is a clock on a shelf above the fireplace, its pendulum moving silently from side to side counting seconds as they disappear into nowhere. There is a tall vase decorated with bulging grapes, silver spoon, candle holder, porcelain hare...

What’s the silver spoon doing there?

I tried to remember lazily but my eyes have already stumbled upon a photograph in a frame and the spoon was instantly forgotten. My feeling of restfulness has disappeared without a trace and tenacious and bitter sadness replaced it.

I walked over to the fireplace and picked up the photo. My fingers gently caressed his familiar face frozen on a thin plate of a black and white image. The same face, the same smile, that mischievous expression of his dark eyes. I didn’t even need to count how much time had passed since that day, I just knew - one month and eighteen days. Forty-eight days in total. Or fifty-two if you count form the day when Elmer received the letter. Thoughts instantly flooded my mind as my frozen memory tried to frantically scroll through everything that happened that night in April. I abruptly put the photo back on the shelf and walked away from the fireplace.

It would make no sense to go through this nightmare for the umpteenth time.

It doesn’t help. The ransom was paid. He hasn’t come back. End of!

Perhaps it could all change again?

My inner voice sang timidly and I then realised that in a few seconds the nightmare will start all over again. My head will get torn apart by painful thoughts, tears will roll down my face and desperation will spread a net of iron threads over my mind causing me new pain.

I frantically took a deep breath and held it. I need to calm down, get distracted, take a couple of Tylenol pills and go to bed. Tomorrow is a new day and something might change. I exhaled slowly and stood in the middle of the room for a few seconds trying to listen if insane voices would come back but it seemed they were gone - at least for now. I rubbed my face with the palms of my hands and headed for the bedroom.

I only made a few steps when the phone in the lounge rang.

Silver phone on a shelf made a second piercing noise and screen lit up in blue.

“Hello.” I pushed the answer key and breathed wearily as I wistfully looked at the bedroom door.

“I am calling from the Dreams Ltd Corporation.”

I shivered and tensed up.

A-a-and the time has come ... the words sailed through my head.

“Order number 1839920 was filed on your behalf at the beginning of April. Is that correct?”

For a split second I fought a fugitive desire to lie and said:

“We would like to meet up with you to discuss the details of repaying the debt.”

“OK.When?” I shivered trying to imagine what they would ask for in return.

“Today?” I was indignant but tried to compose myself. “I’m sorry, but isn’t it a bit late now?” The mantel clock showed 10pm. “Maybe I can come and see you in the morning? Say, tomorrow at nine or ten? Let me just write down the address...”

The unflappable voice interrupted me but I noticed a subtle change in her tone of voice and now it felt like I was talking to a robot-woman.

“The car will come for you in fifteen minutes. No ID is necessary, just a retina scan will be enough. Our signed Non-Disclosure Agreement will be breached if you make just one phone call after our conversation or before the car gets there. Hope to see you at the office in an hour. All the best, Miss Moore! ”

I heard the short beeps down the phone. I stood there staring dumbfounded at the phone.

What a polite young woman… What a pleasure to talk to you - Dreams Ltd!

Sarcastic thoughts swirled in my mind like a whole colony of bees but there was nobody to sting except for me. I could only hope that the conversation in the office is going to be with someone else as the mere thought of the robot-woman made me to feel repulsed.

I put the phone down on the shelf and went into the bedroom. There is only enough time only to have a quick shower and get changed. My comfortable bed beckoned more than ever but I went passed it without thinking, it might still be possible to sleep today but later. First I need to find out exactly how they will expect me to repay four hundred and fifty thousand dollars.

Four hundred and fifty thousand - an incredible amount of money!

Image of Alex appeared before my eyes – the face on a black and white photograph.

The car was speeding through the night streets of the city but not a single speck of light would reach me through the tinted windows. No streetlights, no shop windows – only darkness. Car interior was lit by a few dimmed lights built into the doors and the celling.

Of course one shouldn’t expect to be shown the way to the Corporation building. How naïve was I to ask for their address and expect an answer! I could make out a vague silhouette of the driver through the partition that separated me from the front of the car but I could not see a thing of the surroundings. Nobody spoke to me. A short greeting was the end to the conversation that never happened. The only sign of the car moving was my seat that was somewhat shaking steadily. Some moments later I felt my body move forward and then go sideways. Car stopped for a bit but a few seconds it was speeding up again.

Traffic light, I noted automatically, looking at the panel with buttons for changing the temperature in the car and positioning of the seats. Window and door locks were missing.

Not losing composure (escape was never an option) I continued to stare at the black impenetrable glass.

Corporation.... Recent conversation with the lady-robot went through my mind. So it's time to find out what their rules are. I knew from the very beginning who I was dealing with but I had no choice - adverts for Dreams Ltd. were everywhere: billboards, streets were full of beautiful slogans and titles. “Problems? Need help? Talk to us ... Our number is easy to remember.” Elegantly dressed people from TV screens sounded very convincing, telling us how easy and convenient their service is. However I have not heard or seen anybody who had actually benefited from this service. It wasn’t just strange it was scary. Something became more or less clear after I signed the Non-Disclosure Agreement but how can it be that not even a single rumour reached me until then?

Don’t people whisper between each other in bars? Don’t best friends trust each other secrets? To me all this looked strange to say the least, if not suspicious.

But there was no choice.

When Elmer said that Alex was gone and then a few hours later he’d received a letter from his kidnappers – nobody could present me with the money needed. Nobody, except Dreams Ltd. After several futile attempts to get some answers from my friends. Has anyone used it before? What could this Corporation ask for in return? I had no other option but pick up the phone and try to reveal everything myself. I didn’t want to think that my friends would betray me. But I still couldn’t quite believe that no one else had used this service before me.

Well… It makes no difference now.

I recalled the day when I decided to make that call.

When I heard that Corporation lends money without asking to repay them in the same way – I made my final decision. I agreed. Money was transferred to my account very quickly, almost immediately and nobody mentioned the day of the repayment of that debt may come and what exactly I will be asked to do. Hopelessness of the situation did not allow me to debate. Having been a responsible person throughout my life I comprehended that it’s too much of a burden having to agree to a provision of an unknown service in return. But what else could I have done? However, even now – if I was asked to betray or kill someone – I would seriously reconsider or even refuse conditions of the agreement. I was, therefore, hoping that everything will get settled without going to any extremes.

So, yes, I got the money. And I sent them to the kidnappers. But Alex never returned.

Well, that’s not the Corporation’s fault, I guess.

I kept on staring at the dark window gritting my teeth. They don’t care if Alex came back home or not. They lent me the money and now they want to get it back. Or whatever it is they want back instead. It’s their right.

I closed my eyes and sighed.

After a few minutes the car stopped. The driver’s door slammed and then the door beside me opened.

“Mrs Moore? We have arrived.”

“Arrived” I murmured to myself and got out of the car.

“Tea, coffee or maybe just water?” asked a tall and incredibly thin man, getting up from his desk to greet me, “Alcohol?

He nodded. His face looked yellowish and kind of dry, perhaps, the reason for it was the lighting in the room or maybe a sand-coloured jacket that was creasing every time he moved, as though it was worn by a mop or a broom and not a by a man.

“My name is Mr Brahms”, He introduced himself pulling out a pack of cigarettes and lighting one up, “Scott Brahms. And you, if I remember correctly, you are Shereen Moore.”

“That’s correct” I said frostily trying to make myself feel comfortable in the hard chair, “You know that.”

“Hopefully your trip here has not been too much of an inconvenience to you...”

I was starting to get irritated. His false politeness was completely unnecessary. We both knew why I was here but he knew more and that was making me feel rather nervous. My tired body was begging for some rest. The office was furnished quite primitively: one table, a couple of chairs and a wardrobe in the corner - simple and tasteless.