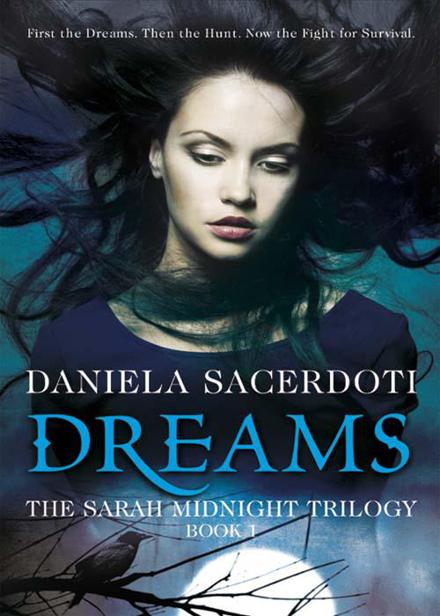 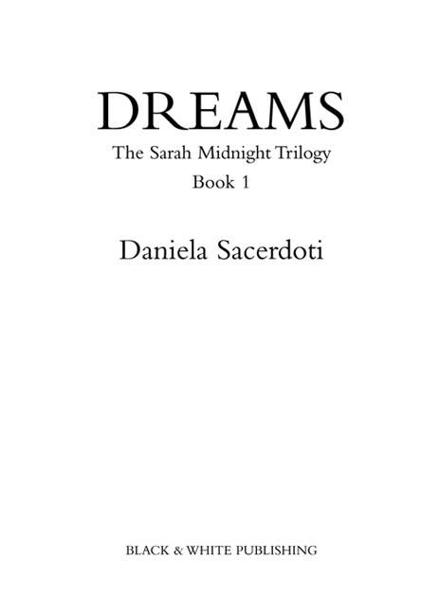 This story is for Irene

More than I can ever say, thank you Ross, Sorley and Luca.

Thank you to my mum, Ivana Fornera, and my brother, Edoardo Sacerdoti, for encouragement and belief.

A heartfelt thank you to my lovely editors, Janne Moller, Rachel Reid and Kristen Susienka, without whom Sarah wouldn’t be who she is. Thank you for our chats over coffee and for the many times you made me laugh. And for pushing me well out of my comfort zone!

Thank you to my agent, Lindsey Fraser, for believing in me (and for giving the best hugs).

Thank you to Linda Strachan for the very first critique of Sarah and for being such a generous mentor to a new writer.

Many thanks to Ailidh Forlan, Beth Pearson, Heather Arbuckle and Jamie Bell, Sarah’s reader panel, for their thoughts and suggestions: you were invaluable!

Finally, thank you to Maire Brennan and Julie Fowlis for Sarah’s writing soundtrack.

7 A Place Between the Water and the Sky

8 Spirits of the Air

9 He Came in a Dream

20 A Dream of Ravens

24 The Life That Could Have Been Mine

31 The Man Who Wasn’t There

36 The Hand Holding Mine

49 Masters of the Sea

50 In Glass and Water

You’d never think it could happen to you.

You’d never think that one day you’d stand in a graveyard, rain tapping on a sea of black umbrellas, watching your parents being lowered into the earth, never to come back.

It’s happening to me.

They said it was an accident. Only I know the truth.

So here I am, standing on the edge of the deep, black holes dug for them, knowing that they have been murdered; knowing that nobody – nobody – is ever going to believe me.

I can never give up the fight, this fight that has been handed down to me, thrust upon my unwilling shoulders. I’d rather be buried with my parents, my brave mother and father, who lived and died by the Midnight motto:
Don’t Let Them Roam
.

My parents were hunters, like their parents and grand-parents before them, and scores of ancestors behind me, hundreds of years back, fulfilling the same call.

I am Sarah Midnight.

Am I to atone

For my father’s mistakes?

Sarah was kneeling on the cold pavement, before a girl of about her age. The girl was writhing and moaning, trying to free herself from Sarah’s grip. Her face glowed feebly in the darkness, white with fear.

And then the girl’s expression changed. Fear turned into fury, and a strange sound came from the back of her throat.

The girl’s eyes started turning black, slowly, slowly, until they were two pools of hatred. Her skin grew a sickly white, her hair stiffened and crumbled, blowing away in the night breeze and leaving a bald, greying skull in its place. Her hands sprouted claws, her clothes ripped to reveal paper-thin skin and long, bony limbs.

The stuff of nightmares. Literally.

Because it had been a dream that told Sarah where to find this girl, and what she had become. Where to find the creature that had possessed the girl’s body and soul, destroying every trace of her, and was set to do the same to as many young women as it could. Sarah had dreamt of the demon in the play park, waiting, biding its time for a victim to come along – until Lily appeared. Sarah knew that the dream was telling her to go, in spite of her fear, and hunt the creature like her parents would have done. Except she’d be on her own.

Lily’s transformation was now complete, and the creature was about to free itself. Sarah had to act fast. She closed her eyes and started calling her power.

My first time,
she thought.
Just like in my dreams.

For a few terrible seconds Sarah feared it wouldn’t happen. She feared that the blackwater, the power she had inherited from her father, would fail her. She feared that her hands would stay cold, and that she would be helpless, turning from hunter to prey in the space of a heartbeat.

Grief and anger invaded her, and with them came the release. The blackwater took her like an unstoppable current, and her hands were flooded with heat. Sarah looked down in horror, expecting to see her arms in flames. The creature shrieked under Sarah’s touch, a blood-chilling screech. Its skin began to weep and dissolve. After a minute or so, all that was left of the demon was a puddle of dark water, so cold that it was painful to touch.

Sarah sat back on her heels and exhaled slowly, as if an enormous weight had been taken off her shoulders. She looked at her hands dreamily, as if she couldn’t quite believe what had just happened, what had come out of her. She’d known about the blackwater for a long time – she’d known that her father had possessed it, and that she was bound to have it too. But to feel it happening …

Exhilarating and terrible, all at the same time.

Sarah shivered in the chill wind. She was drenched in that strange, dark liquid they called the blackwater, but really was something else, something without a name. She wiped her hands on her jeans, slowly, as if in a daze. She was drained, exhausted.

Her parents should have taken her, they should have guided her, but they’d been killed too soon. So she’d had to do it by herself. She had to learn, and learn fast. So many times she had asked her parents to start teaching her…

“Back soon, my love.” Her mother’s hair brushed her cheek softly, as Anne bent over Sarah’s bed to kiss her. The gentle light of Sarah’s lampshade illuminated Anne’s delicate features and made her brown eyes shine. Sarah wanted to throw her arms around her mum and keep her there, keep her home.

“Sarah, darling, we talked about that. It’s too dangerous.”

“I know!” Sarah’s pale face was flushed with the vehemence of her words. “But I want to stay with you. I don’t want to be here on my own …”

“You’re safe. You know that your dad and I saw to that. Nothing can attack you here.”

“It’s not that. I’m not scared for myself …” Sarah hesitated. Words were failing her.
I’m scared you won’t come back
, she wanted to say, but the sentence got stuck in her throat. She couldn’t put her fear into words. “I need to learn. I’m a Midnight too. I’ve never used the blackwater. I don’t know how to …”

“The time will come. I promise. Soon.”

“If my gran was alive, she would have taught me!”

Anne took a deep breath. “Yes. Yes, she would have.”

“We’re protecting you, Sarah. Enough now. You’re delaying us.” James, her father, had walked into Sarah’s room, a hard look in his eyes. His big, tall frame was silhouetted against the door. His tone was clear: there would be no more discussion. When her father spoke, Anne listened. Always. Sometimes Sarah wondered if her mother had ever had a will of her own.

“Mum …” Sarah called. But Anne had followed James, and she hadn’t looked back.

It was another lonely night for Sarah, listening out for her parents’ footsteps, wondering when she would be allowed to embrace her rightful inheritance. Wondering what she would do if they didn’t come back.

“I’m sorry, Lily,” Sarah whispered to the girl lying dead on the ground. At least Lily had been the creature’s last victim.

Sarah stood up. She picked up the scarf that had fallen in the fight and wrapped it around her neck, a slash of white against her black coat, her hair blowing long and soft in the breeze. She turned away and started walking home. For the last time.

Because tomorrow she’d have to pack, leave her house, the memories of her parents and everything she knew, and move in with her aunt and uncle.

Sarah turned the key in the door and let herself in. She took off her coat and scarf and hung them up, carefully, arranging them on the peg as if everything depended on them hanging straight. She took her shoes off too, and walked onto the wooden floor of her immaculate hallway. She bent down to wipe an invisible stain, and then again, just to make sure.

Once in the kitchen, she started wiping all the surfaces with a cloth, painstakingly, taking great care not to miss a bit. She was so tired that her arms were shaking, but she
had
to do it. She had to.

Her stomach started rumbling. She was hungry, but she knew she wouldn’t be able to swallow anything. The knot she’d had in her stomach since her parents’ death hadn’t allowed her to eat properly for days.

Seeds of Deception: A Kate Burkholder Short Story by Linda Castillo
The Sacred Scarab by Gill Harvey
Paskagankee by Alan Leverone
Pretty Little Dreams by Jennifer Miller
Twenty Trillion Leagues Under the Sea by Adam Roberts
How Many Letters Are In Goodbye? by Yvonne Cassidy
Misjudged by Elizabeth, Sarah
Deep Rocked by Clara Bayard
Falling For Sakura (Falling For Sakura Trilogy, #1) by Praks, Alexia
The Lake Shore Limited by Sue Miller
Our partner