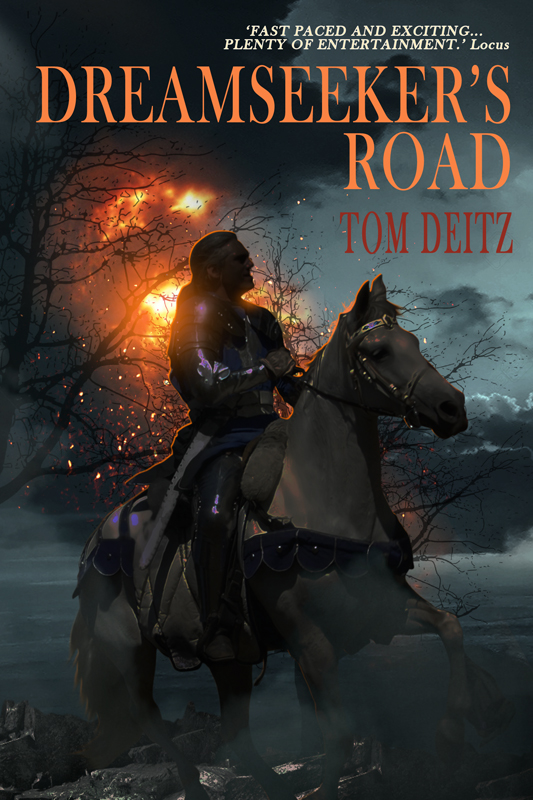 Chapter V: Into the Woods

Chapter VIII: Spirits in the Night

Chapter XII: The Woman in the Woods

Chapter XIII: Over the Hills and Far Away

Chapter XV: Blood on the Tracks

Chapter XXII: Raid on a Rade

Copyright 2016 by Estate of Thomas Deitz

This ebook is licensed for your personal enjoyment only. No part of this book may be reproduced in any form or by any electronic or mechanical means, including information storage and retrieval systems, without written permission from the publisher or author, except in the case of a reviewer, who may quote brief passages embodied in critical articles or in a review. If you would like to share this book with another person, please purchase an additional copy for each person you share it with. If you're reading this book and did not purchase it, or it was not purchased for your use only, then please return to your ebook retailer and purchase your own copy. Thank you for respecting the hard work of this author.

“Don't dig down
too
far,” Gargyn advised his eldest through a puff on his thornwood pipe. “The land runs thin this far outâyou
could
chop right on through!”

“'T'd be more interestin' 'n stayin' 'round
here
!”
the lad shot back sourly, pausing to wipe a lock of moss-colored hair from his forehead before continuing his midday hoeing.

“Here's good 'nough for us,” Gargyn replied, with a scowl that took in most of the melon patch and half the surrounding woods besidesâas well as two more biddable sons beyond range of his tongue: Evvan and Evvellâwheat-thatched the one, cornflower-locked the other; black-kilted and crimson-trewed respectively. “We know who we are; nobody bothers us; don't take much to make stuff grow; an' there's always 'nough to hunt. What else you want?”

“You think fallin' through the floor o' the World's fun?” Gargyn snorted through another puff. “You wanta see the end o' the World, you march half a day past where I'm pointin' an' you'll find it soon enough! Fresh hole burned through there not a year gone by.”

Markon paused again at his hoeing. He had made no discernible progress. “The Littl'un saw a dragon,” he offered slyly, lifting a brow for effect.

Gargyn's slanted eyes narrowed beneath his crimson mop. Chills danced across his bare torso and dived beneath his kilt. He suddenly felt ages old. “Where?”

Markon grinned smugly. “Them woods,” he replied, sweeping a knobby six-fingered hand toward a copse of feathery trees a good minute's trot away. “Said it was red as blood an' crusted with jools an' silver. Had round black feet an' squinty cat eyes.”

Markon leaned on his hoe. “He said it was all crouched down like a wolf does when it's huntin'; said it was ten arm spans long an' twice as tall as he was. Said he was just standin' there chewin' a 'shroom, an' he heard somethin' roar an' saw it flash 'tween two trees, an' then it was gone.”

“Tol' you what?” another voice intrudedâas a welcomed cool dampness pressed between his bony shoulders. He twisted around to accept the mug of cider his mate, Borbin, had brought to ease his tiller's thirst, noting the jug in her other hand and a covey of mugs hung from her scarlet kirtle. Impulsively, he hugged her, tweaked a tawny braid, and would have fondled an ample breast had the boy not been gawking.

“Tol' you what?” Borbin persisted, filling another mug for the glowering Markon.

“Only dragons 'round here's them kind,” Borbin muttered, as she pointed to the High Road that formed the far edge of the field. Gargyn had to squint even more than usual, but made out the traveler: elegant gray stallion with silver stripes, sky-blue barding, and a young man astride: gold-haired, slim, and handsome; his every move graceful, the ice-blue gaze he trained on them keen even here, and full of disdain. He stared a long moment, while Gargyn glared back, then set spurs to sides and was gone in a flurry of shimmering cloak. Gargyn wondered vainly why all the Danaans were so tall and sleek and fair, while all male bodochs were as knottily thin as their women were ample. Not that the Danaans minded, sometimes. Why, he remembered his cousin Mevâ¦

“'Least dragons hoard stuff you c'n steal,” Borbin sighed. “Them Seelie folk won't help nobody, not even when it's
their
land what's rottin' away.”

“Be better off talkin' to Rhiannon.”

“No, but she's got ears that'll listen to us small folk. That's more'n Lugh'll do.”

Gargyn was about to request elaborationâbut at that moment, with a rumbling shriek like a pride of cow-sized lions trying to roar and purr and yowl all at once, a scarlet shape leapt from the fringe of the forest and launched itself across the melon patch, scattering Gargyn's brood in its wake. The Littl'un had been right too: it really was all crouched down like a wolf. Real compact, in fact, with its black legs moving faster than he could see, a flipped-up rump but no true tail, and a hint of shadowy gray beneath, that hurt to look at straight.

And then it was rushing at them, narrow eyes wide and blazing; and Gargyn saw with a start that someone rode in a sort of enclosed carriage midway along its back. And then it sprangâand vanished, leaving a wake of wind hot as forge-fire and smelling of iron.

When he picked himself up from where he'd flung himself in fear of his life, it was to see Borbin's eyes as huge as the bottom of her mug. “Dragonâ¦” he managed between gasps.

Fortunately, Borbin was infinitely practical. “Didn't hurt nobody,” she observed. “An' weren't no dragon.”

“
Fuck
it weren't!” Gargyn spat before he remembered what he'd told the boy.

“Weren't no dragon,” Borbin repeated. “I seen a picture in a book one time, what was stole from the quick-folks.”

“An' what were it then?” Gargyn demanded.

“Well, I'm not sure,
exactly
,”
Borbin admitted. “But I
think
it was what the quick-folks call a shev-ro-lay.”

More precisely, she hid behind a life-size cardboard cutout of the illustrious Virginian some resourceful English major had posted on perpetual lookout just inside the door to the study carrel she'd let herself into half an hour before. That it was not
her
carrel was of no concern, nor that the means by which she had circumvented the lock would have raised eyebrows in security forces more elite than the University of Georgia Police. No, what mattered was remaining undetected five minutes longer.

She'd had a bout of panic just now, when the youthful security guard had paused by the inset window and peered throughâto catch Mr. Poe, but not the slim, dark-haired woman who crouched behind him. A sigh of relief whispered from her lips as his footsteps slapped away, echoing among the looming ranks of loose-shelved periodicals that filled half the Ilah Dunlap Little Library's basement.

The alarm made Tana start in spite of herself. Six months in this country, and she still hadn't acclimated to all those electronic trinkets that festooned every building: warning her away from this, watching while she did that; denying entry to one place, easing access to another.

âBuzzing fifteen minutes ago to remind a huge building's worth of would-be scholars that a mere quarter hour remained until closing time.

And again five minutes later, this time with blinking lights.

And once more just now, with lights
and
guard. Four minutes to go.

The fluorescents outside, that had given her sharp pale features a sallow glow, went dark, plunging her into blue-gray gloom in which the only relief was the ghostly silver square of the carrel window.

TwoâTana eased from Mr. Poe's shadow and turned the doorknobâand was alone with three million books, uncounted periodicals, and more microformsâfilm and fiche bothâthan she wanted to consider.

Silentlyâbarefoot beneath designer jeans and a long-sleeved black silk shirtâshe crept toward the library's core. No one was about. Then again, few would have noted her anyway, master that she was at moving unobtrusively among these foreigners, among these odd strangers who were so scared ofâ¦
everything
that they built glass and metal eyes to ward them while they slept.

Eyes that did not, however, see everywhereâor everything. Or everybody.

Abruptly she was there. Steel-toned elevator doors faced double gray-painted analogues across an unlit lobby. Steps angled up and down beyond the second, while an eye-sized light blinked balefully above their juncture: a fiery counterpoint to the moonbeams that worked their way through infrequent windows to paint sea-toned geometries on the floor.

She paused at the right-hand portal, listening, caught steps, but distant and receding, then sharper clicks as master switches were thrown on level after level. Each quenched an acre of brightness; each dimmed the stairwell more, as guards cleared every floor in sequence from top to bottom.

Deep Waters by Jayne Ann Krentz
Night Light by Terri Blackstock
SEALs of Honor: Dane by Dale Mayer
Destiny by Sharon Green
Circle of Influence (A Zoe Chambers Mystery) by Dashofy, Annette
I Know What You Did Last Summer by Lois Duncan
Second Stone by Kelly Walker
Vanni: A Prequel (Groupie Book 4) by Ginger Voight
The V'Dan by Jean Johnson
The Silver Arrow by Todd, Ian
Our partner