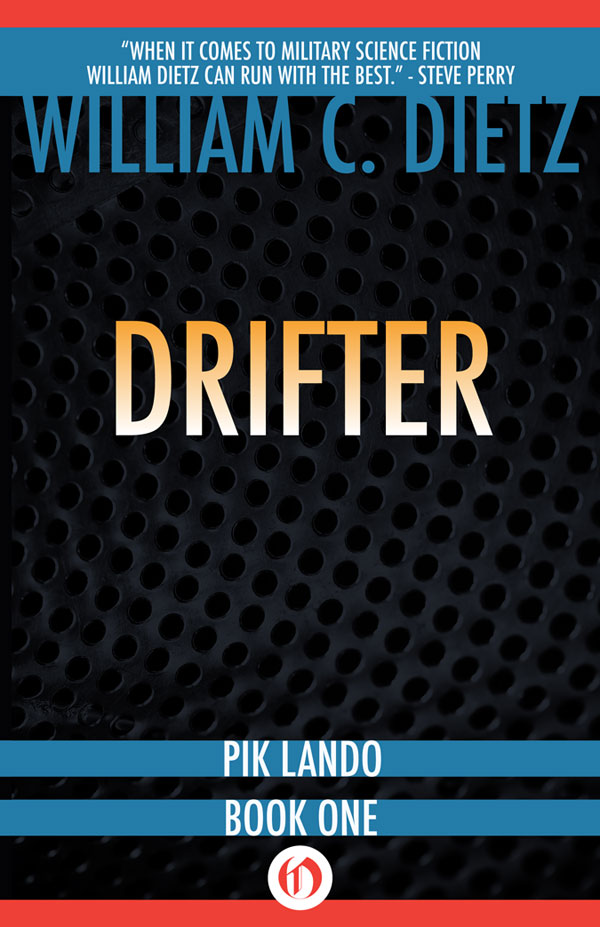 For my dearest Marjorie.

Thanks for the adventure, the companionship, and the laughs.

Remember, we'll know it when we see it.

Pik Lando felt
The Tink's
landing jacks touch duracrete and cut power to the ship's repellors. The freighter groaned loudly and slumped to port. The control compartment tilted with her.

Lando touched a switch and a green indicator light came on. Good. Number 3 lubricant began to drip from a special tank located under the port wing. As each drop hit the repellor-warmed landing pad it hissed for a moment and turned to steam.

Any maintenance tech in the empire would take one look, shake his or her head, and proclaim sadly, "Sorry, Captain, but your port-side landing jack hydraulics are shot. This is gonna cost you but good."

Lando grinned. Of course it wouldn't cost him "but good," since there was nothing wrong with the ship's landing gear, or any other part of the vessel for that matter.

The truth was that in spite of all appearances to the contrary
The Tinker's Damn
was in excellent shape. The ship's frame and skin had been welded together thirty years before Lando was born, but her electronics, life support, and weapons systems were only five years old. And her drives, well, they were practically new, and capable of pushing
The Tink
through space faster than anything short of a speedster.

"Speed," his father liked to say, "is a smuggler's best friend. You can forget all the fancy weapons systems and leather upholstery. It's speed that'll save your ass every time."

Lando knew it was true, as were most of the things his father had told him, which explained why
The Tink
looked like salvage but really wasn't.

With speed born of long practice Lando's fingers danced across the control board, shutting most of the systems down, and placing the rest on standby.

It was night outside. All four of his external vid screens showed Lando different angles of the same thing. The dark, partially lit shapes of other ships, a scattering of greenish float lights, and beyond them the low, blocky shape of HiHo's main terminal building. Most of the control center was sensibly underground, safely removed from the possibility of a drive explosion or similar accident.

Or as his father liked to say, "If bureaucrats value anything, it's what they sit on."

There was a soft chime from the ship's comset. A female voice flooded the cabin. "Ground control to newly arrived vessel FTC six-niner-two. Welcome to HiHo. Please stand by for a customs inspection."

Lando swore softly under his breath. Why so efficient? He'd hoped for some additional time.

Lando touched a key on the deceptively grimy control board. "Ground control, this is FTC six-niner-two. That's a roger… am standing by."

Lando's leathers creaked slightly as he stood and looked around. He compensated for the tilt through force of habit. The control compartment was a total mess. Empty coffee bulbs sat here and there, almost invisible under piles of old cargo manifests, and stray items of clothing. Lando was playing a role, the part of a surly, somewhat eccentric one-man freighter crew, and everything must support that image.

"You can't just
play
at it," his father had told him over the years, "you've got to
be
it."

An empty meal pak crunched under Lando's boot as he turned and made his way out of the cockpit. A light came on as he stepped into the tiny head.

Like everything else aboard
The Tinker's Damn,
the mirror was filthy. Lando's face rippled when he moved. The three-day growth of beard and the bloodshot eyes made him seem older than his twenty-six years. It had been a long run and he was tired.

Lando activated the tap, let some water flow into his cupped hands, and slapped it against his face. It felt good.

Wait a minute. Lando looked at his hands. They were clean. Completely clean. That would never do!

Lando touched a panel and it hissed open. He grabbed a jar labeled SKINSOFT, and opened the lid. Rather than the white cream the jar had originally contained, it was half full of Number 6 grease.

Lando took a dab of the black stuff and rubbed it into both hands. He was careful to get some of the grease under his nails. The result was a pair of grimy-looking paws that could belong to any engineer in the empire.

Now, should he pull one last check on the cargo? Or head for the lock instead?

Lando decided in favor of the lock. The cargo would be as he'd left it, and customs inspectors didn't like to wait, especially for the likes of tramp-freighter captains.

The smuggler walked down the narrow corridor, past the tiny cabins, through the circular lounge, and stopped by the main lock. He was just in time. There was a loud
bong
followed by a hoarse voice. "Inspector Critzer here… open up."

Lando palmed a dirt-blackened control panel and felt something heavy hit the bottom of his stomach. There were all kinds of customs inspectors. Good ones, bad ones, honest ones, and corrupt ones. Now for the fifty-thousand credit question: Was Critzer honest or corrupt? Of the two, corrupt was better. Honest inspectors are notoriously unreliable, while corrupt inspectors do what they're supposed to.

An indicator light went from red to green, indicating that the outer hatch was closed. Lando touched a button, and as the inner hatch started to open, video appeared on the small screen located just under the lock controls. The smuggler didn't like what he saw.

The customs inspector had short salt-and-pepper hair, a small nose, and large sensual lips. The lower one protruded slightly, giving him a pugnacious air.

Lando saw that Critzer was about six feet tall. The custom inspector's once muscular body was now turning to fat. His blue uniform was neat enough, but a huge gut hung out over his police-style gun belt, and bounced slightly as its owner turned towards the inner hatch. Honest or corrupt? There was no way to tell.

The smuggler slid into the surly but slightly oily persona that went with his appearance, and waited for the hatch to cycle open.

Critzer stepped out, gave Lando an insulting once-over, and looked around. "This ship is absolutely filthy. Don't you ever clean the damned thing?"

Critzer activated his portacomp and looked officious. "So, you're master of this wretched scow?"

Lando unzipped a breast pocket, reached inside, and withdrew a small, carefully doctored data cube. Though entirely bogus, the cube was a nice piece of forgery, and had cost Lando more than two thousand credits. Money well spent if it worked, a ticket to the rock pile if it didn't.

One side of the cube had been smeared with filling from the fruit bar in Lando's pocket. The smuggler wiped at it with his sleeve, grinned apologetically, and handed the cube to Critzer.

The customs inspector accepted the cube with obvious distaste, dropped it into the receptacle on his portacomp, and touched a key. Data flooded his screen. He read aloud.

"Ship,
The Tinker's Damn,
registered on New Britain, to one Patrick Dever."

"That's me," Lando said proudly, and threw in a silly grin for good measure.

Critzer looked up from the screen and scowled. "Shut up, Dever. If I want to hear from you, I'll ask. Now, where was I? Oh, yes. Most recent port of call, the Dallas industrial-agroplex on Terra, where you loaded five thousand pounds of animal protein."

Critzer raised an eyebrow. "Animal protein? What the hell for? We've got plenty of meat."

Lando did his best to smile ingratiatingly. "Not just
any
animal protein, sir. These are one hundred percent genuine Terran steaks, the best in the empire. Each one is perfectly marbled, hand-trimmed, and flash-frozen ta preserve that wonderful flavor. All ya gotta do is take one of these babies, defrost it, and pop it on an open grill. Before long, ya start ta hear that fat sizzlin' 'n' poppin'. Then ya flip it a coupla times ta seal those juices in, and bango, ya slice it up. It fair ta melts in your mouth, sir… and I'm thinkin' they'll sell real quick."

Critzer ran his tongue over thick, fleshy lips. Lando's description had set his stomach to growling and he could almost taste the Terran steak. He cleared his throat.

"Maybe, and maybe not. It's true that Terran cattle don't do well on HiHo, but we've got some pretty good variants, and I don't hear anybody complaining. Still, I suppose there might be a market,
if
you're willing to pay the duty."

"I'm glad to hear that," Critzer replied sanctimoniously. "There's far too much smuggling these days. Hang the bastards, that's what I say. That'll slow 'em down."

"Well, enough of this chitchat," Critzer said, motioning towards the bow of the ship. "Let's see what's aboard."

Critzer began his inspection in the control room and worked his way back towards the stern. Whatever else he might be, Critzer was no fool, and the ensuing inspection was one of the most thorough that Lando had ever seen.

The portly inspector looked under, over, beneath, behind, and around everything. At Critzer's insistence, Lando was forced to open crawl spaces, to take up deck panels, to remove equipment facings and prove there were electronics inside.

Scared to begin with, Lando became increasingly frightened as the customs man proceeded to find many of the little hidey-holes he'd used successfully before but were presently empty.

Lando came to dread the moment when Critzer would inspect the hold. Would the inspector see right through the scam, laugh, and arrest him on the spot? What were HiHo's jails like, anyway? Could you buy your way out?

These questions and more filled Lando's mind, and added weight to the rock in his gut until his hands were shaking and his mouth was desert-dry.

Finally, after what seemed like an eternity, the two men passed from the engineering space into the hold itself. It was half empty. Here one could see
The Tink's
ancient ribs, still strong under layers of dirt, curving down to meet a heavily scarred deck.

The freezer module sat at the very center of the otherwise empty hold, illuminated by a single cargo light and strapped to sturdy rings set into the deck. A small break in the container's seal allowed a thin tendril of vapor to drift up and away from the lid.

The module had its own power supply, but was connected to the ship's as well. A thick black cable squirmed across the deck and disappeared into darkness.