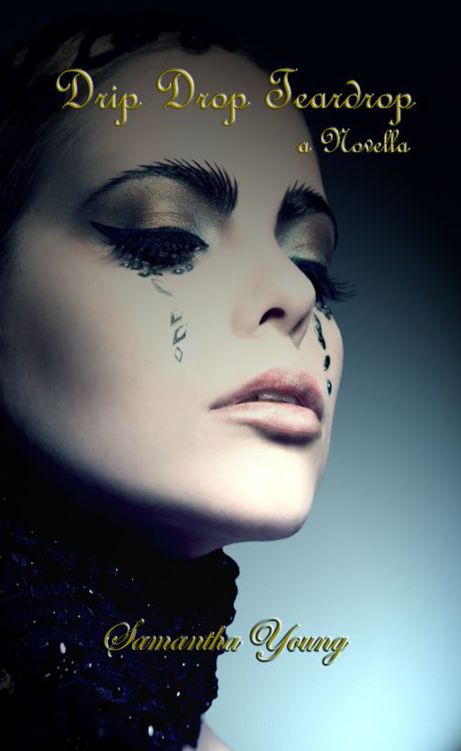 This ebook is licensed for
your personal enjoyment only. This ebook may not be re-sold or
given away to other people. If you would like to share this book
with another person, please purchase an additional copy for each
person you share it with. If you're reading this book and did not
purchase it, or it was not purchased for your use only, then you
should return to Smashwords.com and purchase your own copy. Thank
you for respecting the author's work.

A Note to Readers: Thank
you for purchasing Drip Drop Teardrop, a Novella. It should be
noted that this novel is written in British English. US readers
should expect differences in spelling etc.

Inspired By the
Song ‘‘Overload’

Overload, oh what a match
we are,

as we romance along towards the
fire escape.

Open fire, forever in your
arms,

splendid time we have

doing what I
dread.

Oh my Lord, can I buy some
time?

I am dancing, OK.

Overlord, Lord of the
Underworld,

as we twist and
twirl.

Hot and dry, high in my cloven
heels,

this is how real love
feels,

as we prance and die.

Oh my Lord, such a fancy
fire.

You sure can dance.

You I will never
forget.

I hope you remember me
later.

I'm swimming in a puddle of
sweat,

I'm tenderly served on your
plate,

the band must continue to
play,

so we can dance.

I love to dance.

Baby, dance with me.

Yeah I can dance.

Your love is to dance.

This
sallow-faced creature with the sunken cheeks and hollow eyes
bruised with unnatural tiredness could not be her vivacious Aunt
Caroline. Only a year ago her aunt had run the New York Marathon,
power walked to her job as an editor at the
Greener World Magazine
, and had
proclaimed Sunday, not a day of rest, but ‘Rock Climbing
Sunday’.

But like a blood-sucking
vampire that enjoyed playing with its food, cancer had stalked Aunt
Caroline and now taken her hostage, drawing her life source out of
her day by day.

“
You sure
you’re going to be OK?” Avery asked for the fiftieth time as she
tucked her aunt into bed. She put her meds beside her and made sure
her favourite book was on her bedside cabinet along with her
reading glasses, a glass of water, her cell in case she needed
Avery, and the remote to the ancient mini television that sat in
the corner of the room.

Aunt Caroline smiled
wearily and made a shooing away gesture. “I told you, today is a
good day. Will you please just go? Your friends are waiting for
you.”

Ignoring the knot of
anxiety in her chest, Avery pressed a light kiss to her aunt’s
cheek and made her way quickly out of the apartment before she
changed her mind. She had gone through this every month since her
aunt’s diagnosis. But it stopped her aunt from feeling unnecessary
guilt, and truth be told Avery needed the break
sometimes.

“
There you
are.” Sarah grinned at her, throwing an arm around her as she
stepped out of the apartment building. Jemima winked at her and
stubbed out her cigarette with the toe of her six inch yellow
heels. At five ten with dark chocolate skin, unusual hazel eyes and
a figure to die for, Jemima belonged to the world of modelling in
New York City. She smoked because she swore it kept her skinny, but
knowing how much Avery hated it (and everyone was taking it easy
with Avery these days) she tried not to smoke around
her.

“
How you
doin’, girl?” Jemima asked, rubbing a hand up and down her arm
affectionately.

Despite perks such as
Jemima not smoking in front of her, this is what Avery hated:
everyone treating her differently because her aunt was dying. It
had happened when she lost her parents and it was happening again.
She forced a smile. “I’m all dressed up and ready to
party.”

“
You don’t
say.” Sarah took a step back from her, her little sequined clutch
purse winking in the cast of the street lights. “Josh is going to
blow a gasket when he sees you in this get up.”

Rolling her eyes, Avery
pulled on the hem of her black dress. “Is it too much?”

“
Nuh-uh,”
Jemima assured her, already moving off the sidewalk to flag down a
cab. “Just enough, I’d say. With legs as short as yours you need
all the help you can get.”

“
Excuse me if
some of us aren’t Amazonians.”

Avery frowned as a cab
pulled over and she shuffled into it with her friends. “Where are
the guys?”

Sarah shrugged. “We’re
meeting them at the club instead. So, your aunt’s still OK about
these club nights?”

Avery smiled
humourlessly. “She practically forces me into it.”

Jemima grunted from the
other side of Sarah who was packed in between them. “Don’t need to
sound so thrilled to be with us, girl.”

“
Jammy is
just teasing.” Sarah glared at Jemima, and the girl narrowed her
exotic eyes on her.

“
I told you
to stop calling me Jammy.”

Sarah grinned
unrepentantly and turned back to Avery. “So seriously, she’s
OK?”

No, her aunt wasn’t OK.
She wasn’t going to be OK ever again.

When Avery first found
out about her aunt’s terminal diagnosis she was a freshman at NYU,
studying journalism just like Aunt Caroline had. It had been a
struggle for them to afford it anyway; Avery hadn’t moved out of
their tiny one bedroom apartment in Brooklyn, she was commuting.
And she had a part time job at a coffee chain since they were one
of the few corporate companies that Aunt Caroline didn’t have a
problem with.

But after
they found the cancer it became clear that Avery was going to have
to work full time to take care of them. Aunt Caroline had health
insurance but it only went so far; they’d had to use Avery’s small
trust fund to pay the rest of the medical bills, but Caroline
couldn’t work so there was no money for rent and food. Avery quit
school and got a full time job as an office assistant at the
Greener World Magazine
.
Aunt Caroline had worked for them forever and they were devastated
for them both, so they had offered Avery a job and were really
flexible if she couldn’t come to work when her aunt was having a
particularly bad day.

Of course,
her Aunt Caroline was riddled with guilt, thinking she had somehow
destroyed her big sister’s little girl’s chance for a life. That’s
why she insisted that Avery joined her friends at their favourite
nightclub,
4.0
,
at least once a month. No matter how much she tried to tell her not
to feel guilty, Avery knew her aunt couldn’t help it. And it was so
stupid, considering her Aunt Caroline had given up her free and
easy life to take care of Avery when her parents had died. That had
been nine years ago when Avery was ten years old. Her mom and dad
had taken her on vacation to Europe. They were going to London,
then Paris and then onto Venice and then Berlin. They only made it
to London. They hired a car and her dad had taken a stupid
roundabout the wrong way and they ended up in a head on collision
with a truck. Her parents were killed and she had barely survived.
Aunt Caroline flew over from New York, saw her through her
recovery, and brought her home to her tiny apartment, to the sofa
in the living room that doubled as Avery’s bed. But Avery didn’t
care about losing her pretty purple bedroom with the fairy lights
and gauze bed netting that hung over her four poster making her
feel like a princess. All she cared about was Aunt Caroline, her
hero. Her hero who had understood that all Avery wanted was to be
normal again; who had spent all her extra money on cool clothes so
Avery fit in at school; had stretched Avery’s curfew so she could
hang out with her friends and not be singled out for being a loser.
Somehow only she understood that after months of people ‘pointing’
at the kid who’d lost her parents, all Avery needed was
not
to be noticed. She
liked to blend. In fact, standing out made her physically afraid.
And Caroline, who was the complete opposite, had never judged her
for that.

And now Caroline was
dying, too.

Avery swallowed against
the burning lump in her throat, looking out the cab window and
blinking back tears so Sarah and Jemima wouldn’t see.

She listened distantly as
the girls chatted about work and guys for the forty minute or so
drive to the Meatpacking District. They pulled up to the club and
Avery spotted the guys immediately. They were crowded together, not
too far from the front of the line, Josh towering over nearly
everyone else there. Adam and Aaron stood beside him deep in
animated conversation. As her gaze washed over Josh, who was ogling
the ass of the girl in front of him, she drew in a deep breath.
Josh was cute in that guy next door-brown hair-perfect blue
eyes-dimpled smile-kind of way. Cute but not too cute. He had been
the perfect boyfriend at school - together they weren’t uncool, but
they also weren’t too cool, which satisfied Avery because that way
they didn’t stick out. But when his incessant immaturity and
possessiveness started leading to public drama, Avery had broken up
with him just before graduation. For the first few months of
college he had persisted in trying to get back together with her.
He only backed off now because Jemima had threatened to castrate
him if he bothered Avery when she was going through all this with
her aunt.

She glanced up as Sarah
took her elbow and smiled wanly at Josh as he waved them over.
Jemima was already strutting towards them, ignoring the wolf
whistle from the gorgeous guy two people back from the front. Avery
and Sarah both rolled their eyes and then hurried over to the guys.
The people behind them ‘hey-ed!’ and grumbled and complained at
them for cutting in front until Jemima spun around and iced them
out with one of her famous glares.

“
Avery, you
look amazing.” Josh pulled her into a tight hug, smooshing her face
up against his hard chest. She struggled to pull back and actually
had to push him away a little. He didn’t seem to notice though, his
eyes washing over her, his eyebrows creasing towards each other in
concern. “You OK?” He asked in sotto voce tones. “We’re all worried
about you. We’re not quite sure you’re coping, Ave.”

Avery tried not to
grimace at how patronising he sounded and was thankful when Adam
punched him on the arm. “Dude, shut up.” He turned to Avery, his
chocolate eyes smiling. “Ave, babe, don’t listen to him. We all
think you’re coping great. Its little princess here who worries
like a pimp-less whore.”

“
Why would a
whore worry if she didn’t have a pimp?” Sarah tilted her head to
the side, her nose wrinkled in confusion. “I would have thought a
whore would be thankful not to have a pimp. Aren’t pimps
bad?”

El vampiro by John William Polidori
The Submission of Alistair Ingram by Kelli Maine
The Art of Wedding a Greek Billionaire by Marian Tee
Something Forever by M. Clarke
Rausch & Donlon - Can Be Murder 02 - Love Can Be Murder by Marilyn Rausch, Mary Donlon
Archie's Unbelievably Freaky Week by Andrew Norriss
Libros de Sangre Vol. 2 by Clive Barker
The Fall by Albert Camus
Werewolf in Denver by Vicki Lewis Thompson
Lifestyles of the Witch & Famous by Riser, Mimi
Our partner