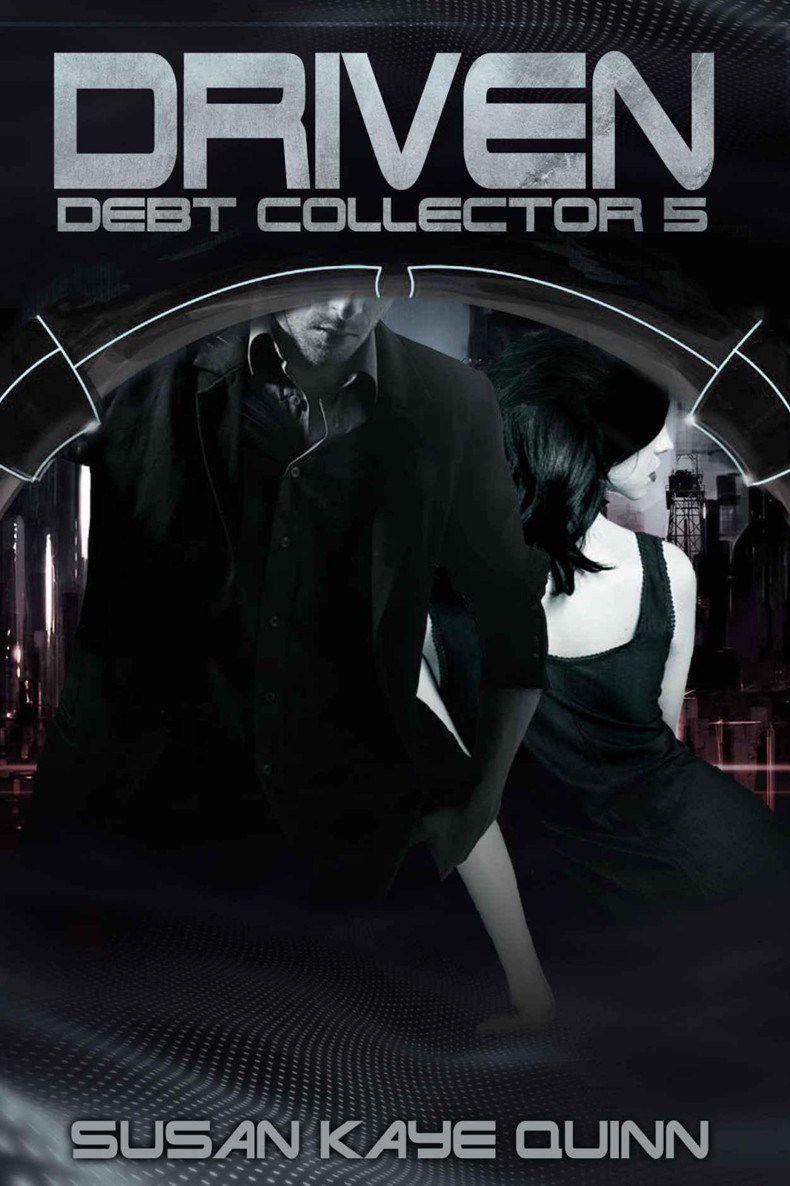 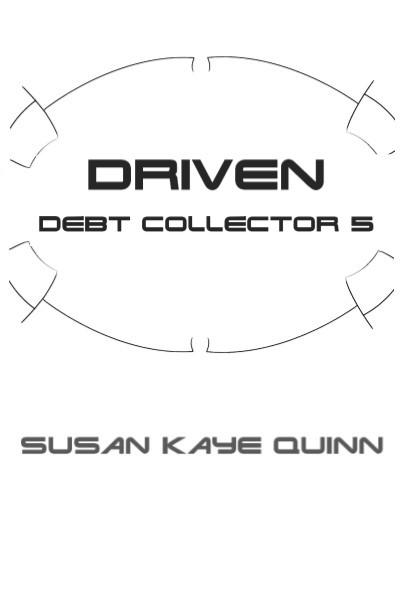 No part of this publication may be reproduced, stored in a retrieval system or transmitted in any form or by any means, electronic or mechanical, including photocopying, recording, or otherwise, without written permission from the publisher. For information visit

Driven
is approximately 14,000 words or 56 pages
, and is the fifth of nine episodes in the first season of The Debt Collector serial. This dark and gritty future-noir is about a world where your life-worth is tabulated on the open market and going into debt risks a lot more than your credit rating.

What’s your life worth on the open market?

A debt collector can tell you precisely.

Lirium pretends he’s a willing debt collector for the mob while deciding whether he can trust Ophelia to help him escape. 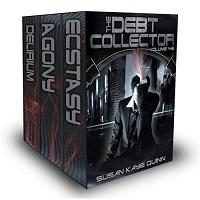 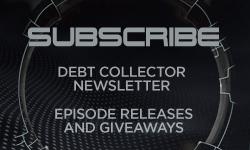 I look in the mirror and check my bruises.

The ones on my face have faded to light-brown imprints of fists. It’s been a week since Kolek’s men used me for a punching bag—my punishment for trying to escape. According to Valac, it could have been worse. I haven’t had a chance to ask Ophelia. Or confront her for betraying me and sabotaging our escape. She hasn’t come to visit, and they haven’t let me out of my room. The only person I’ve seen for a week has been a small-mouthed man who delivers my food, gives me a disdainful look, and leaves without a word. It’s like I’m living in a hotel with unfriendly room service. And locked doors and black, metal bars on the windows.

The bars are to keep me in, not anyone else out.

I twist and look over my shoulder. The bruises on my back have turned yellowish brown. I hope that’s a good sign. They look better than the green, fist-sized blotches that still cover my stomach and part of my chest. I gingerly press two fingers into my belly. The sharp pain that used to be there is starting to fade. I have to push deeper before I find it, and I’m not too eager to do that.

I wash up and pull on an undershirt. The supply of clothes in the dresser drawers is dwindling, and my pinch-mouthed keeper will have to start taking away laundry as well as dishes soon. I slowly ease to the floor and force my body through a set of pushups. Then I lean against the side of the bed, not liking how that simple effort made my insides moan and my chest wheeze. I don’t think I’ve broken anything important; otherwise I wouldn’t be able to do pushups at all.

I breathe through the pain while I flip open my palm screen.

Technically, I could send a message to Candy or the police, but I’m also certain that Kolek is tracking my phone, and I’d be dead before anyone arrived to help. As if anyone would come. A memory of Elena and her apple perfume holding vigil at Tilly’s bedside flashes through my mind, and I press my eyes closed against it. The price of me not returning to Madam A’s isn’t just failing to rescue Ophelia and serving a mob boss who trafficks in life energy. Madam A promised to put Tilly at the bottom of the list for transfers if I didn’t come back. It eats a hole in my stomach that grows larger with each passing day. I hold on to the hope that Madam A’s not the type to carry through on something that might actually hurt the kids. And that Elena won’t find out.

I suck in a breath, open my eyes, and bury that thought under a mountain of determination to get out of Kolek’s mob. I can’t chance making a run for it again—Kolek won’t bother with beating me up a second time. The only way out is to convince him I’m not going to try… then bide my time. He won’t keep me locked up in my room forever. He’ll want to use me again, and when he does, I’d better do a damn good job of convincing him I’m worth keeping alive… at least until I can figure out a way to escape.

I swipe through the pages on my palm screen, keeping my searches innocuous. We’re in LA, so the news is mostly gossip out of Hollywood. Some young actor having a meltdown or going into rehab, throwing away all her potential. I skip over that, but the real news isn’t any better. People dying. Wars brewing. More legislation supposedly tightening the regulations on bean counters, to make sure they account for every last actuarial factor before transferring someone out. All of it is depressing, so I end up watching TV. I’ve seen more shows in the last week on my palm than I have in the last two years. It helps keep me from going out of my mind with boredom, but only barely.

My regular morning check of the mortuary reports doesn’t turn up anyone named Tilly.

It grates against me like an itch I can’t scratch that I don’t know her last name. That I never asked Elena. Not that it matters one way or the other. There’s nothing I can do from inside Kolek’s compound. Still, I search every morning. I’ve tried paging through the regular public records, too, but kids’ files are sealed until they’re eighteen.

Or until they turn up in the morgue.

My door slides open without a tone or any sign of warning. I close my palm screen before I look up, expecting to see pinch-mouth back to gather up my breakfast dishes.

I stare for a beat too long, then push myself to my feet. “Back to finish me off?” The bitterness in my voice fans the hot coals of my anger and flares it to life again.

The door closes behind her. Her little black dress hugs the soft curves of her body. Spots of light ripple across the metallic sheen of the dress’s fabric. Half the thing is black netting that reveals more of her chest than it hides.

I hate that I notice.

“Lirium, baby…” She takes a hesitant step toward me.

“Seriously?” I ask. She freezes mid-step, still half a dozen feet away. “I think you can stop with all the pet names. Save it for the other suckers you lure in to work for Kolek.”

She didn’t bring you here,
a stupid voice inside me says.
That was your idea.
The stupid part also feels a twinge at the look of pain on her face.

She doesn’t say anything for a moment, but she has the decency to drop her gaze and study her pale fingers instead of me. “You’re not going to believe me—”

Her shoulder twitches. She nods. “I don’t blame you for being angry, ba—Lirium.”

I take a small amount of satisfaction from the way her hands twist, one gripping the other, like they’re in some kind of battle to hold back her discomfort.

She finally looks up, eyes dark and round and soft. “But if I hadn’t stopped you, there’s no way you would have made it out of there alive.”

“I guess we’ll never know.” I want her to say she was wrong to betray me, not make excuses for it. I may have been an idiot for trying to rescue her, for caring about her enough to try, but when we had a chance to run she didn’t have to cut me down before I got two steps out the door.

She slides closer, untwists her hands, then stops at my stone cold look. “Lirium—”

“You didn’t have to come with me,” I cut her off, neglecting the fact that I wouldn’t have left her behind. “But you didn’t have to stop me either. You’re worse than Valac. At least I already knew he was a lapdog for Kolek.”

She stares at me with those big, dark eyes. “If I had run with you, they would have shot us both before we left the building. If I had let you run without me, they would have killed you. And you’re only here, stuck in Kolek’s mob, because of me, baby. I
know
that.”

I cringe at the pet name, and I open my mouth to rebuke her again, but she’s still talking.

“I’m not going to let them kill you, not if it’s possible for me to prevent it,” she says. “But running then was a Guppy move, baby. I had to stop you.”

The Syn-En Solution by Linda Andrews
The Thursday Night Men by Benacquista, Tonino
John Maddox Roberts - [SPQR Roman Mysteries 8.6]-Mightier Than The Sword by John Maddox Roberts
The Unexpurgated Diary of a Shanghai Baby by Elsie McCormick
Kenton by Kathi Barton
No Falling Allowed (No Kissing Allowed) by Melissa West
An Antarctic Mystery by Jules Verne
Dire Means by Geoffrey Neil
The Days of the King by Filip Florian
A Silver Lining by Christine Murray
Our partner