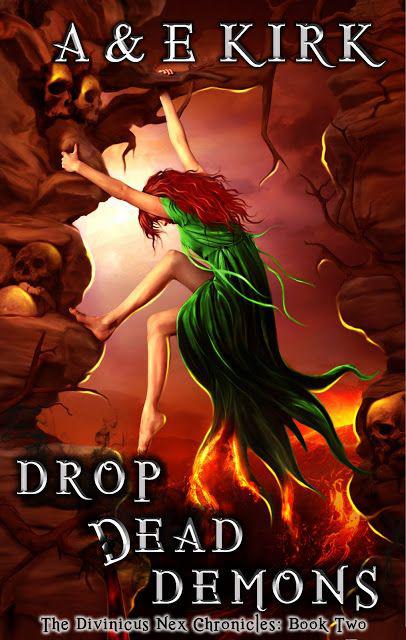 All rights reserved. No part of this book may be reproduced in any form or by an electronic or mechanical means, or the facilitation thereof, including storage and retrieval systems, without permission in writing from the author, except by a reviewer, who may quote brief passages in a review.

This is a work of fiction. Any similarities between the characters, places or events that take place in this book are strictly coincidental.

Visit us online at:
www.aekirk.com 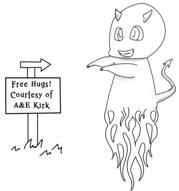 Dedicated to you! Yeah, you. Wipe that bewildered look off your face. It was you, one of our fabulous, loyal, and exceedingly patient fans of DEMONS AT DEADNIGHT, who helped drive us to keep writing DROP DEAD DEMONS. When we felt down, stuck, inept, and lonely, it was your emails and comments on AEKIRK.COM, Goodreads, Facebook, Twitter, and more which kicked us back into high gear. So close your eyes, give yourself a nice pat on the back, and accept our heartfelt air hug!

I’d been hogtied, then shanghaied, and that led to my current state of whole-
lotta
petrified, trapped in a small, dark space, drenched in cold sweat, shivering, waiting for my way-too-short life to flash before my eyes. Trust me, when I’d fantasized about getting “jumped” on tonight’s date, this was
so
not what I had in mind.

If I thought the dark cloth hood over my head had started me in panic mode, the fact that I was now trapped in the trunk of a car boosted the panic by exponential factors. I knew the kidnapping drill, and all the experts agreed that you never get in the car because once you’re in the car you’re dead.

Well, tortured first to the point you wished you were dead. Then dead. For real. That’s me, Aurora Lahey, always the optimist.

I rubbed my cheek against the rough carpet lining the trunk until the hood slipped off. Didn’t help much. Probably because a generous chunk of my long red curls had been shoved into my mouth along with a gritty rag that tasted like rotten fruit wrapped in a yummy layer of sweaty socks.

I tried to Zen it out, forcing deep, shaky breaths through my nose, the humid air thick with musty odors of metal and rubber. Muted light came through the red glow of tail lights, but I couldn’t see much.

Didn’t matter. I knew where I was. Parking lot of
Sapori d'Italia
, the only Italian restaurant in the Southern California mountain town of Gossamer Falls, where I’d been stood-up by my ever-elusive, possibly-pretend boyfriend who was at least supposed to definitely be my bodyguard.

It was a classic, age-old story. Girl with sucky superpower of tracking demons through psychic visions needs protection from aforementioned demons and their ravenous attempts to flay her alive, but she doesn’t want to arouse the suspicion of her thankfully clueless family.

In my case, the answer came in the form of Ayden Ishida, an uber-delicious package of fiercely formidable demon hunter,
smokin’
hot because of both his swoon-worthy good looks
and
the fact that he controlled fire, who offered to pose as my enamored beau, and despite the fact that I knew it was all a ruse, I was falling hard and head-over-heels crazy about him, and frankly — deep breath, Aurora —
I thought he was too, but lately he’d been more absent than attentive, canceling plans and disappearing without explanation, so when he’d insisted on an official date for tonight with just the two of us, I’d let my hopes soar heavenward.

So, naturally, I ended up hogtied in hell.

I realized this wasn’t the optimum time to be contemplating my love life, because, let’s face it, if the
life
part was soon to be snuffed out, the
love
aspect wouldn’t matter much. But seriously, what guy makes a big hullabaloo about us finally having time alone then cancels last minute?

Granted, Ayden sent four other guys from his demon hunting team, known as the Hex Boys, in his stead, but lotta good they’d been, happily chowing down on garlic-infused delights while I was snatched during a trip to the restaurant bathroom.

Sure, I’d landed a few good licks, but ultimately, my attacker had gotten the better of me—gag, hood, arms zip-tied behind my back—and now I was trapped in the trunk of a car.

The only plus to my present perilous situation was that, based on the feel of his body— hadn’t gotten a look at his face—my abductor was human. Not normally one’s definition of good in this kind of impending-doom situation, but for a gal usually in some sort of demon deathological situation, my bright sides tend to be warped at best.

As to the culprit’s identity, I had plenty of options. Someone working for a demon, someone on Madame Cacciatori’s Divinicus Nex extraction team, someone working for the Mandatum traitor trying to assassinate me, or even a good old-fashioned, random serial killer. I was hoping for the latter.

Focus, Aurora
. You were trained for this. Kind of. Okay, not really.

I tucked my knees to my chest, then ignored the scream of my shoulders as I wriggled and twisted my restrained wrists past my butt, legs, and around my feet. Yay, me. Small victory but I’d take it. I ripped out the gag. Huge, deep, beautiful breaths sucked in.

A few of weeks of the Hex Boys’ so-intense-it-should-have-killed-me training didn’t much count when this is where I ended up. Matthias was
so
going to never let me live this down. He’d been constantly on my case about how well I
wasn’t
doing. But I’d take the ragging.

Just had to survive first.

I was still cramped — it was a trunk after all — my long legs having zero chance of stretching out. The plastic ties were boa constrictor tight around my wrists, but I’d deal with that later. Getting out
before
the car started and headed for this psycho’s Chamber of A-Million-and-One Tortures was top of my to-do list. My hands groped. Found a crowbar. And if it was a late model car it should have a—

I slipped shaking fingers into a death grip around the trunk’s release latch and struggled to steady my breathing because my ragged inhalations made it a tad difficult to listen for movement outside. I needed to make sure the attacker wasn’t waiting next to the car ready to snafu my big escape plan.

Still cautious, I dragged my forearm across my sweat-ridden brow, took a deep breath —which almost ended in a cough — and pulled down the latch, easing slowly against the resistance until…

In the silence, even the soft
pop
of the latch releasing sounded like a rocket launch. I cringed and caught the trunk before it sprung fully open, keeping it lifted only a crack. Frigid air scuttled in, turning the already cold sweat on my skin to an ice rink and giving credence to the weatherman’s forecast of a spring snowstorm. My breath fogged into the air as I peeked out, eyes darting across my limited field of vision.

It was quiet and dark in this distant end of the parking lot. Secluded from the road and the restaurant. Only a few quick steps from the edge of the eerie forest with all its creepy shadows and sounds.

In this isolated area, light was spotty at best. Casting deep shadows across the parking lot, a hulking yellow snowplow loomed to my left along with a tow truck a few aisles up. Not to mention the multitude of meaty, man-sized pickup trucks and SUVs that every mountain-loving family — except the Laheys — seemed to own, standing Paul Bunyan tall amongst the baby sedans.

I didn’t like being this far from the restaurant and the Hex Boys, but I was fast, and once I was out of the trunk, I’d book it full-throttle to safety. I just had to make sure the coast was cl—

Someone stood a few yards away.

My throat garbled some terror-ridden noise. I panicked, twitched, and lost my precarious grip on the trunk lid.

It started to rise.

I groped, frantic to stay silent. In my peripheral vision, I couldn’t see details, but the single dark figure had his back to me.

He started to turn around.

Not so lucky. If he saw me now, he’d just slam me back inside. Probably conk me over the head first.

I pressed my lips together to silence the whimpering, caught the edge of metal, and brought the lid back down, low enough so it seemed closed, but not so low that it re-latched. Oh, the subtleties of surviving a kidnapping were intricate indeed.

Then I held my breath. Waited. Ready to kick the trunk open if it sounded like he was coming, which I may not even be able to hear over the erratic pounding of my heart or the whitewater rapids of blood roaring through my ears. Sweat dripped into my eyes. I blinked to cut the sting.

After precious seconds passed without disaster striking, I cracked open the trunk again, raising it only high enough to see the back of his thighs. He wore dark pants, seemed sturdy and powerful —
to my distress — but he hadn’t moved — to my relief — and he was turned away from me — another plus.

I licked my salty lips. Squinted. He was about three or four strides away. I could do this. I was fast enough. I had to be.

I counted to three— Okay, maybe it was eight…or even twelve, but who’s counting? Oh, right, that would be me. Well, at the count of
whatever
number it was when my guts finally overpowered my sheer terror, I sprung the lid and leapt out swinging.

The crowbar made contact with my attacker. There was a satisfying
thud
.

All the more satisfying when I realized who it was.

The evening mist gathered, snaking low to the ground and so thick cold droplets already clung to my hot cheeks and shimmered on the edge of my lashes. I blinked to focus through the blur as he crumpled to the ground, but there was no question.

I knew my kidnapper.

Stocky, just taller than Amazon me, his mahogany waves curling around the collar of his wool jacket, and dressed in all-black like the darkest pit he called home.