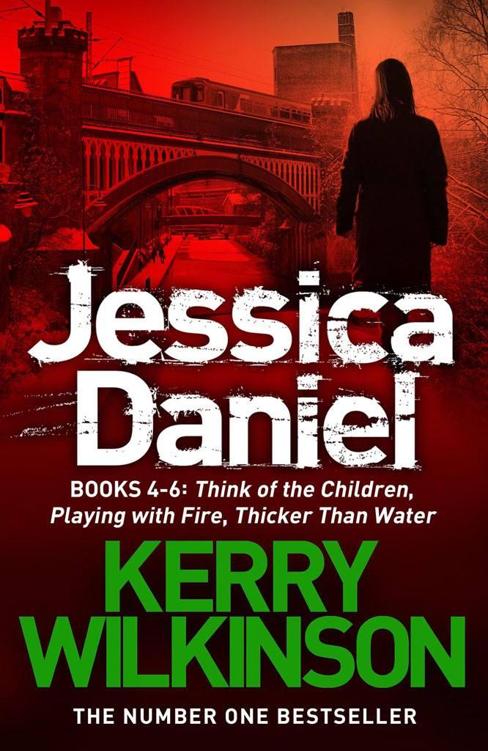 Think of the Children

Think of the Children

The windscreen wipers on Detective Sergeant Jessica Daniel’s battered old car thundered from side to side in an attempt to clear the pouring rain. She leant forward for
what seemed like the hundredth time since starting the journey, wiping a thin layer of condensation away from the inside of the front window.

Jessica steered with one hand while continuing to clear the windows, muttering curses under her breath that related partly to her car, partly to the daily commute, but mainly to the weather
itself. She had lived in Manchester for over a decade and if there was one thing the natives were used to, it was rain. She shivered slightly as cool air poured out of the car’s vents. It was
almost five minutes since she’d set the fans to the hottest temperature possible but they still weren’t producing anything other than a light but decidedly arctic-feeling breeze.

Glancing away from the road, Jessica looked at the man in the passenger seat. ‘If you could stop breathing for a while it would make this a lot easier.’

Detective Constable David Rowlands gave a half-smile. ‘Was that one of the selling points when you bought this thing? “Works perfectly as long as you don’t breathe when
it’s raining”.’

‘You can walk if you’d prefer.’

Out of the corner of her eye, Jessica saw the constable take a half-glance out of the passenger window but it was clear he wasn’t thinking about it seriously as the rain continued
hammering on the roof of the vehicle. ‘You’re all right. I can’t believe you make this journey every day.’

Jessica sighed, continuing to edge her car forward in the slow-moving traffic. She lived in the Didsbury area, south of the main city centre. In a region that offered everything from high-priced
flats at Salford Quays and multi-million-pound footballers’ mansions all the way down to some of the most deprived housing estates in the country, it wasn’t a bad place to call home.
The biggest problem where she lived was the traffic jams on the way to the Longsight police station where she worked. The tailbacks were bad enough at the best of times but with the weather the way
it was, everyone was moving even more slowly than usual. She kept tight to the car in front, ignoring the person in the vehicle she knew was trying to cut into her lane.

‘You didn’t have to stay at mine last night, you know,’ Jessica said.

Jessica paused and smiled, thinking about the night before. ‘Don’t say things like that around the station or you’ll start rumours.’

‘You don’t have to be so disgusted at the idea of being associated with me. Anyway, I’m amazed your girlfriend came for tea; I’ve spent the last four months thinking this
“Chloe” was imaginary. At least I’ve met her now and verified she isn’t clinically mental.’

Rowlands sighed. ‘Is that an official medical term?’

The temperature changed almost instantly from freezing cold to searing hot. Jessica’s car’s fans didn’t differentiate between anything other than the two extremes. The shift
meant the windscreen did at least begin to clear, although the only thing it revealed was rows of traffic seemingly not moving and a set of traffic lights in the distance, the red light beaming
through the misty greyness of the morning.

Jessica shuffled uncomfortably in the driver’s seat, trying to stop her legs from cramping, and sighed again. ‘It wasn’t that long ago I was on a beach for my only holiday in
years reading crappy books, drinking cocktails and enjoying the sun.’

‘How can I forget? They dumped all your paperwork on me. I can’t picture you lying around not doing anything though. In all the time I’ve known you, you never stop.’

Jessica didn’t want to admit it but he was right. She had spent the first morning on the beach with a book trying not to look at an overweight tourist wearing leopard-print Speedos and a
sailor’s hat. After getting bored and hiring a car, she spent much of the rest of her three-week break driving around the Greek island. She had intended for the holiday to be relaxing, a
chance to get some space after a series of murders where the killer had sent her severed fingers from the victims through the post. After almost becoming the final casualty herself, Jessica had
wondered what she wanted from her future. Given her state of mind and accrued unpaid overtime, she was given permission to take a longer holiday than most officers got.

She went away not knowing whether this was the job for her and returned none the wiser. So little had changed.

Jessica ignored Rowlands’s assessment, slowly moving her car forward as the lights ahead turned green and the line of traffic inched along. The car that had been trying to cut into her
lane edged in behind her and Jessica felt a small pang of utterly irrational elation at the minor victory.

Dave started to hum an upbeat tune Jessica didn’t recognise, which only added to her irritation. The lights flicked back to red just before she could drive through and, although she
thought about not stopping, she slowed before putting on the handbrake, coming to rest at the front of the queue.

‘Can you stop doing that?’ she asked irritably.

Rowlands turned to look at her. ‘What?’

‘Sorry, I didn’t even realise I was doing it.’

‘You’ve been doing it a lot recently. This whole domestic bliss, moving in with your girlfriend thing has almost turned you into a normal member of the human race. Albeit one that
hums.’

Rowlands laughed quietly to himself. ‘It’s Christmas in a few weeks. Aren’t I allowed to be cheery?’

Jessica reached towards the fan controls and turned them off. She hoped the mixture of cold then hot air would even itself out and make the final five minutes of their journey bearable. To her
relief, the thudding rain on the metal roof started to ease. She peered up at the still-red traffic lights, then looked to her left where cars continued to speed across the junction.

The screeching noise was the first thing she heard. It sounded as if it had started some distance away, but it was hard to tell because of the rest of the din going on around her. Jessica
quickly looked to her right as a black car squealed across the junction, wheels locked, spinning on the drenched surface. Everything seemed to happen in slow motion, the vehicle twisting a full
circle and smashing into a lamppost in the centre of the junction before being hit by a blue car coming from the opposite direction and completing another half-spin.

Jessica blinked, trying to take in what she had just witnessed. For a fraction of a second, it was as if everything had stopped, even the rain. Without thinking, she switched off her engine and
got out of the car. She didn’t say a word but Rowlands was moving too and together they dashed across to where the mangled car had come to a halt. Jessica headed for the black vehicle,
Rowlands towards the blue one.

Jessica could feel her heart beating quickly as she arrived at the wreck. There was a huge crack in the windscreen, the deflating airbag pressed against it. Car horns blared around her and other
people were approaching the car. Jessica took out her police identification and shouted for them to stay back, at the same time pointing at a man who had his phone out and telling him to dial
999.

Because of the way the car had spun, it hadn’t entangled itself with the lamppost, instead bouncing after being hit by the other car. Jessica moved to the driver’s-side door, trying
to peer through the cracked glass. The mixture of rain and condensation made it hard to see through the other windows and she took a snap decision to open the door. As she did, a splash of dark red
blood from the inside dribbled onto the ground; the cream material lining of the seat was also drenched.

The blood-soaked airbag had begun to sag onto the driver’s lap as Jessica finally allowed herself to look at the victim. She had seen plenty of dead bodies in her time but this one was a
distorted mess. Jessica quickly realised why: the seatbelt clasp hung limply by the door, unfastened. She felt a shiver go through her as it started to rain again, droplets of water streaming down
her face as she tried to put the pieces together. Despite the mess, the driver’s greying hair made him look as if he was in his fifties. She didn’t know for sure but it appeared that
his neck had snapped. It could have been him hitting the windscreen or the force of the airbag colliding after the impact. Not that it mattered considering the way the pulped skin, blood and glass
made his face look like a warped, dropped pizza. Jessica could not look for more than a second or two. Not wearing a seatbelt had cost him his life.

Jessica shut the door, knowing there was nothing she could do and not wanting to contaminate the scene either through her own presence or by letting rain in.

She again warned members of the public to stay back before walking the short distance to the blue car where Rowlands was crouched, talking to a young woman still sitting in the driver’s
seat. As Jessica came closer, it was clear the woman was crying hysterically, a seatbelt stretched across her. She reached the car and put a hand on Dave’s shoulder, shaking her head slightly
to let him know the fate of the other driver before crouching herself.

Rowlands spoke slowly and deliberately. ‘This is Laura. She was on her way to work, weren’t you, Laura?’ The woman nodded, eyes wide with disbelief as tears continued to flow
down her face. Jessica knew her colleague was doing his best to keep the woman calm, using her name frequently to keep her attention until help arrived. Outwardly, aside from long dark hair which
was tousled across her face from the impact, the driver looked fine, but she was obviously suffering from shock.

‘Are you okay, Laura?’ Jessica asked. The woman nodded again but said nothing.

Jessica left Dave talking as cars swerved around the accident, sirens blaring in the distance.