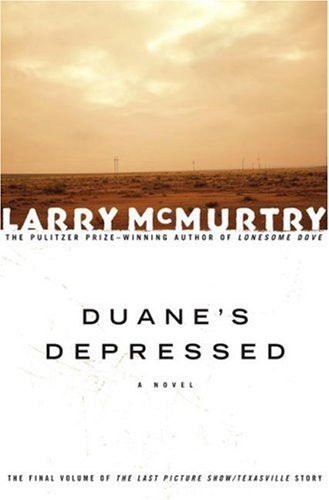 “
Duane’s Depressed
abounds with wonderfully funny characters, all lovingly graced with the lighthearted compassion that is McMurtry’s trademark. . . . Beneath all the humor, however, McMurtry has fashioned a poignant meditation on mortality.”

“Ultimately one of his most moving [books] . . . In the end, it achieves something like wisdom.”

“
Duane’s Depressed
is a rumination on aging, grief, love, the purpose of life, and the redemptive power of art. That might sound like heavy going, but Mr. McMurtry’s touch is always light and humorous, even when dispensing sharp insights into the crisis of middle age.”

“
Duane’s Depressed
has some moments that shed such light on the relationships between men and women that it soothes your soul to read how someone so closely understands the mismatched matches we are. . . . McMurtry talks the talk. His dialogue is Thalia, Texas. And it has meaning and depth and makes his characters people you’re glad to know.”

“The reader is moved by the inconclusive journey of a man who knows that he must change his life but doesn’t know why or how.”

“The kind of book for which the adjective
bittersweet
might have been invented. It’s also the best contemporary novel McMurtry has written in years.”

“
Duane’s Depressed
may be McMurtry’s strongest writing effort since
Terms of Endearment
and among the most thoughtful and evocative novels he has produced since
The Last Picture Show
. . . . Fresh and crisp as a cold north wind, the novel sweeps away standard expectations so many readers have come to have of McMurtry. It offers instead a cogent, thoughtful, sometimes profound examination of the human condition and the human spirit.”

“A celebration of life and the basic instinct to survive. It is a master working at peak form.”

“Duane may be depressed, but readers won’t be. . . . McMurtry . . . is the sort of double-jointed writer who can stretch toward tragedy and comedy.”

“A charming yet bittersweet novel that cuts right to the quick of the human condition . . . [McMurtry has] a writing style that alternately evokes chuckles and probing introspection. . . . It’s with a profound sense of satisfaction that one closes the last page on this trilogy, tinged only by a bit of sadness that the page has indeed been closed.”

“As welcome as a letter from home, a sad and funny one. . . . McMurtry is a dust bowl Salinger, making his characters our friends, their crises our own, in bare and beautiful prose.”

“Alternately funny, bittersweet, and sad, a mix of emotions that McMurtry has all but patented. . . .”

This book is a work of fiction. Names, characters, places, and incidents either are products of the author’s imagination or are used fictitiously. Any resemblance to actual events or locales or persons, living or dead, is entirely coincidental
.

Copyright © 1999 by Larry McMurtry
All rights reserved, including the right to reproduce this book or portions thereof in any form whatsoever. For information address Simon & Schuster Paperbacks Subsidiary Rights Department, 1230 Avenue of the Americas, New York, NY 10020

The Library of Congress has cataloged the hardcover as follows:

BOOK ONE
The Walker and His Family

T
WO YEARS INTO HIS SIXTIES
, Duane Moore—a man who had driven pickups for as long as he had been licensed to drive—parked his pickup in his own carport one day and began to walk wherever he went.

The carport was a spacious affair, built to house six cars in the days when cars still had some size; now that cars had been miniaturized—as had horses—the carport could accommodate ten vehicles and might have accommodated as many as a dozen if the vehicles had been parked with some care; but care, defined as a capacity for attention to such things as order and propriety, was not something that most members of Duane’s large family had proven to be capable of or interested in—not so far, at least. In the Moore carport cars tended to stack up behind one another, so that the person who had parked in front could rarely get his or her car out without a bitter quarrel, sometimes involving fisticuffs, with the person or persons whose car or cars were parked behind theirs.

In fact—and it was a fact that had vexed Duane for years—the spacious carport mainly housed a collection of junk: welding tools, old golf clubs, fishing equipment, baby carriages whose tires had been flat for several years, couches and chairs that had stalled, somehow, on their way to the upholsterer, and towering pyramids of objects acquired by Karla or one of the girls at garage sales, department stores, swap meets, or discount malls—
objects that had evidently fallen in their purchasers’ esteem before they could even get into the house—though the house too contained comparable pyramids of objects that had made it through the doors but not much farther.

Contemplation of his own misused carport was one of the reasons Duane parked his pickup one day and began to walk, but it was not the only reason, or necessarily the most important. He had spent almost fifty years of his life in the cab of a pickup, racing through the vast oil patch that extended over much of West Texas, hurrying from one oil-soaked lease to another; but now he was sixty-two and the oil game had lost its thrill, the chase its flavor. He didn’t want to be in the cab of a pickup anymore, because being in the cab of a pickup suddenly made him wonder what had happened to his life. It occurred to him one day—not in a flash, but through a process of seepage, a kind of gas leak into his consciousness—that most of his memories, from first courtship to the lip of old age, involved the cabs of pickups. His long marriage to Karla, their four children, their nine grandchildren, his booms and his busts, his friendships and his few love affairs had somehow all happened in the few brief periods when he hadn’t been in the cab of a pickup, somewhere in the Texas oil patch.

So, one day in February, with a blue norther cutting through the pastures of dead mesquite like a saw, Duane parked his pickup in the southernmost parking spot in the carport and hid the keys in a chipped coffee cup on the top shelf in the kitchen cabinet. Nobody used that coffee cup anymore—it had sat untouched on the top shelf for years. All Duane hoped was that the keys could be hidden in it for a year or two—that way none of the grandkids could steal his pickup until they grew adept enough to hot-wire it, which ought to be a while.

Then, pleased with his decision and even rather enjoying the crisp cut of the norther, Duane took the first walk of his new life, a short one of some three-quarters of a mile along a dirt road to his office. His departure was observed only by Willy, the grandson Julie had presented them with only a few days prior to her seventeenth birthday; now Willy was nine. The prospect of great-grandchildren was never far from Duane’s thoughts—or
Karla’s either. Willy sat in front of the living room TV, playing a video game called Extreme Rampage—he was merely resting his fingers for a moment when he saw his grandfather walk off down the dusty road. The sight struck Willy as being slightly odd, but he loved Extreme Rampage too much to allow anything to distract him from it for long. He forgot all about his grandfather until his grandmother came into the living room a few minutes later, looking puzzled.

Fuse of Armageddon by Sigmund Brouwer, Hank Hanegraaff
Freedom Club by Saul Garnell
All That's Missing by Sarah Sullivan
Not Guilty by Patricia MacDonald
Faces of the Gone: A Mystery by Brad Parks
Beyond Molasses Creek by Nicole Seitz
Paired Objective: Matched Desire, Book 2 by Clare Murray
Fix-It and Forget-It Christmas Cookbook by Phyllis Pellman Good
A Stolen Crown by Jordan Baker
My Year of Epic Rock by Andrea Pyros
Our partner