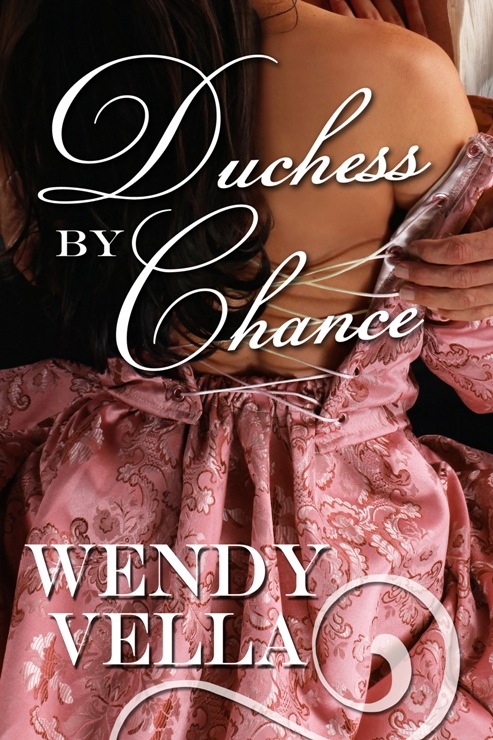 Daniel, Duke of Stratton, learns of his betrothal to Miss Berengaria Evangeline Winchcomb minutes before his father’s death. Having gambled his fortune away, all the late Duke had left to sell was his son. To save his family’s honor Daniel agrees to the marriage, but society’s favorite bachelor is no longer a charming easygoing man - his father’s betrayal has left him angry and with a thirst for revenge.

Eva learns she is to wed the Duke of Stratton on the way to the church. Inside she feels a flicker of hope that at last she is to leave her horrid family - however that flicker is short-lived as she faces the cold unyielding man who is now her husband.

Has she merely replaced one tyrant with another?

Winner of the Readers Choice and Clendon Award finalist

Duchess By Chance
is a work of fiction. Names, places, and incidents either are products of the author’s imagination or are used fictitiously.

Duchess By Chance published by Wendy Vella at Smashwords

When everything goes to hell, the people who stand by you without flinching - they are your family.
Quote by Jim Butcher.

For John, Rob and Kim, love you xx

And to my writing sisters, Cheryl, Shar, Trudi and Kate, who are sharing my journey every step of the way. Couldn’t have done it without your support and knowledge and I can’t wait until it’s your turn.You girls’ rock!!

Spencer Winchcomb watched the Duke of Stratton slowly place his hand on the table before him.

“Dear God!” The peer slumped back into his chair as Spencer laid the last card.

A fierce gust of wind rattled the windows, yet neither player flinched, keeping their eyes trained on the cards. The small parlor reeked of spilt ale and tobacco. The candles had burnt low, their wicks flickering with whorls of smoke as they struggled to stay alight. Chairs were thrown back from the table, indicating recent departures, and glasses and bottles lay discarded on the floor. The game had started two days ago and now only two men remained. One sat with a pile of coins and scraps of paper before him; the other, with nothing.

Their bloodshot eyes held. Exhaustion had been and gone; the duke was now motivated by desperation and Spencer by greed.

“I have a proposition for you, your Grace.” Spencer eased back in his chair and rubbed stiff fingers over his bristly face.

“Anything,” the duke rasped.

Silence filled the small room for several heartbeats and then he spoke.

“I will let you leave here this night with your estates and wealth intact if you betroth your son to my daughter.”

Spencer now leant on the table, his eyes intent as he studied the duke. He knew what he asked was outrageous, yet he also knew that if the duke did not take the offer he was a ruined man. A feral smile flickered across his face; for the first time in many years it would be he who came out the victor.

“I want your signature on a piece of paper stating that your son will wed my daughter upon her eighteenth birthday. Only then will I return your markers.”

Lowering his head, the duke closed his eyes and Spencer knew the rush of excitement that had flowed through the old man’s blood while he gambled had ebbed away, leaving him aware of what this night had cost him. He knew he was beaten and his son would pay for his weakness.

“Do you agree, your Grace?”

The duke said nothing as he rose on unsteady legs and walked from the room. Spencer heard the murmur of voices and minutes later the duke returned, followed by the innkeeper who held paper, quill and ink in his hands.

After taking a deep breath, the duke then began to speak as he wrote. “I, Charles Daniel Loftus Irving, sixth Duke of Stratton, vow to wed my only child, Lord Daniel Charles Loftus Irvine to...?”

“Miss Berengaria Evangeline Augusta Winchcomb,” Winchcomb said as the duke looked at him.

“In the year of her eighteenth birthday. Declared this day January 5
th,
1794.”

Placing one hand on the paper as the duke began to sign, Spencer Winchcomb said, “I want it written that the marriage must be consummated.”

The old man did not raise his head although his fingers tightened around the quill as he added the necessary words.

“I’ll be glad to be of service to you any time, your Grace,” Winchcomb said once the second copy was signed and tucked into his shirt pocket.

The duke did not speak again. Pulling on his coat, he walked from the room.

Had the seventh Duke of Stratton the ability to choose the weather, he could not have matched his mood better than with the relentless fall of rain and grey gloomy skies that met his eye as he stared out the carriage window.

“Will we arrive soon, your Grace?”

Daniel was surprised to hear his wife’s voice, as they had not spoken since the journey began hours ago. Unclenching his fists, he drew in a deep, bracing breath, then looked at the carriage’s only other occupant.

“Under two hours.” His tone was cold and clipped.

She, too, looked out the window, her ugly black bonnet obscuring most of her pale face. Daniel actually had only a vague idea what she looked like as she had kept her head lowered ever since their first meeting at their wedding ceremony four hours ago. Her eyes were possibly blue…or green. He had only spared her a fleeting glance during the service. Her hair was stuffed inside the bonnet so it could be white as snow or flaming red for all he knew. And her dress, although he was not an expert in ladies’ fashion, was a drab brown with no shape, worn underneath a coat that had elbow patches on sleeves that began five inches above her skinny writs. At least he could never forget her name, although God knew he wanted to. Berengaria Evangeline Augusta Winchcomb. It was a cruel twist of fate that he, the Duke of Stratton - one of the most eligible peers of the realm - was now married to a timid mouse who jumped every time he made a sound.

“Is there a problem?” he queried as she sighed, her breath forming a small white circle on the glass pane before her.

Wife, he thought in disgust. Lord, how he hated her bloody heathen family. But most of all, he reserved a special seething rage for his own father and prayed daily the man was now residing in the hottest part of hell with Lucifer himself as a roommate.

“Yes?” Daniel kept his eyes on the window as she stuttered. If she didn’t have the decency to look at him when she spoke, then neither did he.

“Tis nothing, your Grace.”

“It obviously is something, madam.”

He watched her reflection in the glass as her grey, gloved hands curled into tight fists in her lap, but still she kept her eyes averted.

“I have need of a rest break, your Grace.”

Looking at the landscape, Daniel searched for a landmark. “There is a small inn ten minutes from here. We will stop there.”

Daniel fought the cold knot of fury in his chest and the sudden urge to roar something foul at her. He was not his father and never would be; he kept his temper firmly leashed.

Spencer Winchcomb had tied him neatly to his only daughter, binding the contract so tight; Daniel would never have been able to escape even if he’d known of his impending doom before his father’s death. Well, now they had a title in their family but that was all they would get; he refused to have anything further to do with any of them, including his wife.

His friends had laughed when he’d told them he was leaving London during the height of the season to get married. No one had believed him - and indeed why would they have? Daniel had had trouble believing it himself.

“I have arranged for you to marry Miss Winchcomb.”

Daniel could still hear his father’s words echoing in his head. He had loathed his sire since he was old enough to realize the man who conceived him was a monster. The old duke had been a tyrant who had never bothered much with his only child unless it was to mete out punishment. Theirs had not been a relationship based on the bonds of love; they had basically ignored each other until the Duke of Stratton had summoned his son to his bedside to say his final farewell before he departed these fair if slightly chilly lands for the glories of heaven. Or, as Daniel now liked to believe, the eternal fires of hell.

“It was a promise made at her birth, a promise you must now honor.”

And with those fateful words, the duke had finally succumbed to an inflammation of the chest. There was no wife to mourn him or daughters to weep and rather than the relief Daniel had believed he would feel, he had instead been filled with burning rage. Even in death, it seemed, the old bastard would play a hand in his life.

“I shall be but a moment, your Grace.”

Realizing the carriage had stopped, Daniel opened the door and stepped down. He then turned to hold one hand out toward his duchess.

“Hurry!” he snapped when she did not move quickly enough. Grabbing her waist, he lifted her down. “I have no wish for my day to deteriorate any further. Run!” he added loudly as the heavens opened in earnest, although after what they had endured already today, a few seconds in the rain could do them little harm.

The proprietor met them at the door and ushered them inside.

“Tis my belief it’s setting in,” he said, to which Daniel grunted something in reply. After handing his wife over to a woman who came to assist her, he followed the proprietor to a small parlor where he slumped into a chair before the fire.

“Tis mulled to my own special recipe, my lord.”

Daniel nodded to the man as he took the proffered mug. Pushing his nose into the vessel, he inhaled the spicy scent. Taking a large mouthful, he held it briefly in his mouth, enjoying the taste of cloves and cinnamon before he swallowed and the warmth slowly filled his body.

Dear God, I’m married.
His mind kept repeating the words over and over again.

Cuckoo by Wendy Perriam
Out of the Dark by April Emerson
Ashlyn Chronicles 2: 2288 A.D.: A Time Travel Sci-Fi Fantasy by Glenn van Dyke, Renee van Dyke
The Eyeball Collector by F. E. Higgins
The Bride Wore Black by Ally Gray
Madness by Kate Richards
A House by the Side of the Road by Jan Gleiter
The Path by Rebecca Neason
Intimate Seduction by Brenda Jackson
Pimp by Ken Bruen
Our partner