Read Dueling With the Duke (Brotherhood of the Sword) Online

Dueling With the Duke (Brotherhood of the Sword) 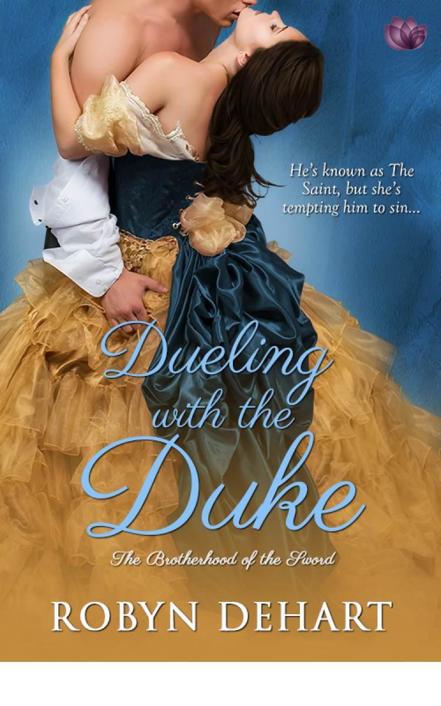 He’s known as The Saint, but she’s tempting him to sin…

England, 1838.
Gabriel Campbell, Duke of Lynford never intended to carry that title, but when his reckless brother gets himself killed in a duel over a woman, Gabe has no choice. Now he’s sworn off love, blaming the woman that broke his brother’s heart and led to his untimely death.

Lilith Crisp, Lady Thornton, knew from a young age that pretty girls grow up and get married off to the highest bidder. Being paraded around London as her husband’s trophy has taught her some unique skills and now she can manipulate any man for his darkest secrets.

Gabriel’s position in the Brotherhood of the Sword leads him directly to Lilith’s door. For Gabe, Lilith is the one woman he’s always wanted, and Lilith is now forced to deal with a man who seems immune to her charms. But a secret about Lilith’s niece brings them together to face a danger that threatens not only their lives, but the fate of England’s Crown. Resisting Lilith is getting more and more difficult and Gabe finally recognizes that he can’t keep blaming her for his brother’s fate. Finding love means forgiving the past and that might be the one thing they simply can’t do…

Copyright © 2016 by Robyn DeHart. All rights reserved, including the right to reproduce, distribute, or transmit in any form or by any means. For information regarding subsidiary rights, please contact the Publisher.

Scandalous is an imprint of Entangled Publishing, LLC.

Not for sale or redistribution. Final content may vary.

To my own budding astronomer, M, you are a shining star and I love you like crazy.

And the hero of my own romance…Paul, you make this crazy world slow down enough that I don’t get too dizzy. You keep me centered and never fail to make me laugh. You’re my heart.

Lilith Jansen stared up at the inky night sky, imagining that the stars were winking just at her. She’d been able to bear only a half of an hour inside the packed ballroom before having to sneak outside for some solace. In truth, she could stay out here all evening, but she knew her father would never allow that. Soon he’d be looking for her, and he’d sternly force her back into the ballroom where he’d try to peddle her off to the highest bidder.

Since coming out last Season, she’d already received a handful of proposals, but her father had deemed not one of them worthy. He was looking for one thing and one thing only—a fat purse. After her mother died, her father had done little but gamble away their funds and then curse her for not bringing in heftier sums from her suitors. She’d tried to tell him, it was
she
who was supposed to bring money to the husband in the form of a dowry, but he’d gotten so angry, he’d nearly struck her. She never brought up the subject again.

Until the suitor with the biggest purse came along, she supposed she would bide her time and wait for the inevitable. For much of her first Season, she’d wasted time fantasizing about a wealthy, handsome, and kind man who would sweep in and fall desperately in love with her. That had yet to happen. And the more she was around other couples in London, the more she realized that it wasn’t only her parents who hadn’t been a love match. That seemed as rare as a falling star.

“My lady, are you hiding from someone?”

Startled, she turned and found a gentleman watching her. Either he’d silently approached, or she’d been so enraptured with the stars, and her own thoughts, that she hadn’t heard him. “Ah, no.” She’d briefly noticed him earlier in the ballroom. He was wickedly handsome with light brown hair that fell in soft waves about his head, and shrewd hazel eyes looked directly at her. A silent but palpable tremor seemed to shimmer between them. “I was…” She forced herself to look upward.

“Are they not magnificent? You can see them so clearly over here where the light is dimmer.” Once her eyes were off the handsome stranger she could once again appreciate the heavens.

“The stars?” he asked. “Yes. Though admittedly there are those who shine brighter.”

She again looked to him, confirming that his words had been a compliment as he gazed directly at her. “I don’t believe we’ve had the pleasure of a formal introduction.”

“True. It is quite scandalous that we’re even speaking.” He winked at her. “I won’t tell anyone if you won’t.”

She grinned. “My lips are sealed.”

“That is a pity, dear lady.” He bowed slightly. “Lord Gabriel Campbell,” he said, retrieving her hand and bending his head over it. His warm breath permeated the thin fabric of her glove as his lips pressed to her wrist.

Lord Campbell. She knew the name, or rather she knew the reputation that went along with the name, and now she understood why he was known as a rake. He’d scarcely spoken to her and she already felt partially seduced. A warm flush covered her chest and neck.

Again she looked to the stars to try to distract herself. “Do you see that cluster of stars there?” She pointed up and to the right.

The fact that he recognized them pleased her. “Yes, the Pleiades are commonly called that. I’m not quite certain why, but they’ve always been a favorite of mine.”

“Fascinating. I don’t believe you introduced yourself, by the by.”

“Lilith Jansen. Quite nice to meet you, my lord.”

She smiled and nodded.

His eyes traveled the length of her, and immediately her body responded—her breath caught, and she found herself biting down on her lip. She’d had suitors, more than she could count, but this man, something about him was definitely different. Granted, he was a notorious rake, which should shoot off warning signals in her head. Instead she found herself wanting to lean closer to decipher precisely what balance the green and brown were in his eyes.

He closed the distance between them as if reading her mind; his gaze never wavered off her. “The stars are lovely, but not as lovely as you, my lady. I suspect that someone will come looking for you soon.”

She eyed the doors that led back into the ballroom. “I suppose you’re right.” Namely, her father. If he made an appearance, he would, no doubt, embarrass her. If he knew she’d been out here discussing the heavens with a gentleman, he’d most certainly threaten to throttle her. He’d never actually done so, but she certainly wouldn’t be surprised if one day he did.

“Tell me, Lady Lilith, are you out here merely to enjoy the evening sky or are you also not a fan of these ordeals?”

She laughed. He’d given her a perfect opportunity to pretend that her interests had been something other than the stars. Ladies weren’t supposed to be given to academic studies, at least according to her father. She should flirt and get as much male attention as possible without being inappropriate. “I shouldn’t be so transparent. These balls are rather tedious.” Not entirely untrue, though she found herself longing to be more honest. “That being said, I rarely get the freedom to enjoy such a beautiful view.”

“Your secret is safe with me. In truth, I too find these parties trying. I’d much prefer to be home reading. Though I admit it would be nice to sit with such a lovely creature while enjoying my philosophy books.”

So he, too, had interests that defied Society standards.

He reached over and toyed with the dance card that hung from her wrist. “Have you been hiding out here long?” he asked. “I should think a woman of your beauty would have a filled card within ten minutes of arriving.”

She gave him a sideways glance. In truth, she could fill her card faster than that, but she’d become accomplished at sidestepping men whom she did not wish to encourage in their pursuit.

“Brother, have you found a dance partner for me?” a man asked as he approached. “I don’t believe I’ve had the pleasure. Introduce us, Gabriel.”

The muscles along Gabriel’s jaw tensed, but he nodded nonetheless. “Lady Lilith Jansen, may I present my brother, the Duke of Lynford, Rafael Campbell?”

The duke winked, then bowed deeply.

Rafael was more conventionally handsome than Gabriel, but she found her eyes drawn to the taller, younger brother. Though he was likely out here attempting to do nothing more than seduce her, she’d felt as if he’d seen her, the real her. A foolish notion, that.

“Well, then, I do believe the next dance is a waltz, and I should like to claim it.” The duke lifted her dance card.

She raised her eyes to Gabriel’s, willing him to interject and claim the dance as his own, but he merely bowed and stepped aside. Disappointment flooded her. It was futile, she knew that. The Duke of Lynford was the one with the purse strings, so he would be the one her father would select for her. It mattered not that the younger Campbell was the first man in London to pique her interest.

Duty demanded that she take the duke’s arm and allow him to lead her back into the ballroom. She stole one last glance back at Gabriel, but found him gone. Disappointment flooded her, but thus was her lot in life. She supposed she should be pleased she’d captured the attention of a duke; it certainly would thrill her father.

Nuklear Age by Clevinger, Brian
Masque of the Red Death by Bethany Griffin
Purgatorium by J.H. Carnathan
The Body Thief by Stephen M. Giles
Did I Mention I Need You? (The DIMILY Trilogy Book 2) by Estelle Maskame
Redeeming the Deception of Grace by Kristin Vayden
More Perfect than the Moon by Patricia MacLachlan
Betrayed by Francine Pascal
The Death of an Irish Tinker by Bartholomew Gill
The Truth of the Body (Templer Series) by Dakarai, Duka
Our partner