Read Dukes to the Left of Me, Princes to the Right Online

Dukes to the Left of Me, Princes to the Right 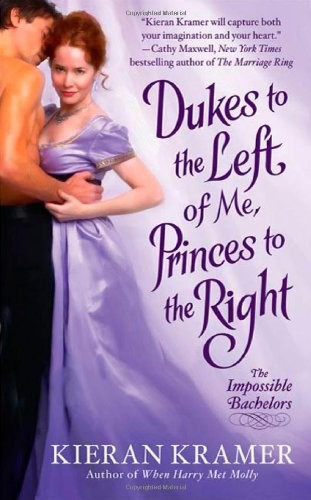 Thanks for all the love.

Once again, I have to thank Jen and Jenny for seeing me through—I couldn’t have done it without either one of you!

And a big thanks to my sister Devon, who’s always there to encourage me and make me laugh.

I’d also like to thank Herbert Ames. He’s a NASCAR man (and secret angel) who was wearing a white suit and a huge grin the day I met him on a plane. I was flying with Devon, and we couldn’t get seats together, which was a bad thing as my sister doesn’t like to fly. Herbert, who’s never met a stranger, said he couldn’t move as he was squashed in, but he promised to take very good care of Devon for me.

A minute later, he called up the aisle in a big, booming Southern drawl, “Kieran Kramer, are you a book writer?”

I was in a middle seat six rows ahead, so I had to stand up, turn around, and answer Herbert in front of a bunch of bored-looking people waiting for the plane to take off.

I dared myself to say, “Yes, Herbert, I am,” even though I hadn’t found a publisher yet.

And I
was
a book writer! I had the thousands of pages to show for it.

Well, Herbert whipped out his cell phone and called his good friend Janet, who was a writer, too, and urged her to read my book.

“Kieran Kramer’s gonna make it, I just know it!” he shouted into the phone. And then he passed it six rows up to me (everyone on the plane looked a lot less bored by this point), and I had a few words with his friend.

Janet was kind enough to read the first chapter of one of my manuscripts. She wrote me a note about it—said it had some good things and also some things that needed work but that, overall, she thought I had a wonderful voice and to hang in there.

Well, I read those encouraging words from Janet Evanovich over and over again as I wrote another story that sold months later, my first book,
When Harry Met Molly
. So thanks very much to you, too, Janet. You and Herbert both helped out a stranger—lucky me!—and for that I will be eternally grateful.

Praise for WHEN HARRY MET MOLLY

In a proper English drawing room on Clifford Street in London’s Mayfair district, Lady Poppy Smith-Barnes, daughter of the widowed Earl of Derby, threw down the newspaper and stood up on shaky legs. Finally, the secret passion she’d been carrying around with her for almost six years would have its day in the sun.

“He’s here,” she announced to Aunt Charlotte. “Sergei’s in England.”

She could hardly believe it. She’d resigned herself to being a Spinster—she was in good company, after all. But now … in a matter of a moment, everything had changed.

Her prince had arrived.

Aunt Charlotte, tiny in her voluminous, outmoded gown, stopped her knitting. “Are you sure?”

Poppy found the paper again and put it under her aunt’s nose. “He and his sister are touring with their uncle’s last portrait and unveiling it for the very first time here in London.”

“Oh, Poppy!” Aunt Charlotte’s eyes were a bright, mischievous blue above her spectacles, and her powdered white wig sat slightly askew on her head. “He’s the only man on earth who could coax you out of the Spinsters Club.”

“Indeed, he is.” She hurried to the front window and looked out, expecting
something
to be different. But the day appeared like any other day. She knew, however, that it wasn’t. It was special.

She spun around to her aunt. “Do you think he’ll remember me? It’s been six long years. I was fifteen. We had only a week. It seems a lifetime ago.”

“How could he forget you?”

She shrugged. “So much has happened to him. He’s been traveling, he was in the military—I kept up with him as best I could through the papers. I’m afraid he’ll see me at a ball and walk right by me.”

Aunt Charlotte laughed. “No one walks right by you, dear. Not with that fiery hair and impudent air.”

“
Aunt
.” Poppy’s cheeks colored. “This is a fine time to remind me I’m not the malleable sort.”

Aunt Charlotte calmly resumed her knitting. “Eversly will survive the turndown, and so will you. It’s not as if you haven’t had a great deal of practice.”

Eversly was due to arrive within the hour, and his would be the twelfth marriage proposal Poppy had rejected in the three years she’d been out. Two of those offers had rather predictably taken place during the fireworks at Vauxhall. Another two had transpired at Rotten Row in Hyde Park at the fashionable hour, both times while she’d sat astride docile mares (Papa wouldn’t let her take out the prime-goers). One proposal had taken place in front of a portrait of a spouting whale at the British Museum at eleven in the morning and two more at the conclusion of routs that had dragged on until dawn. One had transpired in the buffet line at a Venetian breakfast after she’d overfilled her plate with wedges of lemon tart to make up for the dull company, two had occurred in her drawing room over cold cups of tea—tepid because her suitors had prosed on so long about themselves—and one had taken place, inexplicably, at a haberdashery, where she’d gone to buy buttons for Papa’s favorite hunting coat.

Two barons, a baronet, three viscounts, four earls (one of them only nine years old at the time), and one marquess had proposed to her. Two had had large ears. Four had had small eyes. Three had smelled of brandy, and one had lost his breeches in a fountain. One had been missing his front teeth (and it hadn’t been the boy).

Stay calm,
she told herself.
More than ever, you have a reason to say
no
to Eversly.

As the clock ticked closer toward the earl’s arrival, Aunt Charlotte kissed her on the cheek and left the room. Poppy waited another agonizing twenty minutes. Finally, there was a knock at the front door, and she put her newspaper under a pillow. Kettle, Lord Derby’s elderly butler, greeted the visitor in his usual sober way.

And then she stood.

Finally, the earl, a veritable Adonis, entered the room. He had gleaming blue eyes, a golden curl on his forehead, and shoulders so broad she should feel weak in the knees.

But her knees stayed firm.

“You’re alone.” Eversly’s eyes were warm. She could tell he had genuine affection for her, and she did for him, actually. He was sporting, congenial company, but she couldn’t help thinking of him only as a friend. It was always that way with her suitors, as if there were a big
NO
stamped on all their foreheads.

“Yes,” she told Eversly, swallowing hard. “I
am
alone.”

They both knew what
that
meant. Without her father or Aunt Charlotte by her side, she was unchaperoned. Only an engaged or married woman could meet a man alone in a room.

But she wasn’t quite alone, was she? There was her mother—sedate, mature—smiling down at her from her portrait, her wedding rings sparkling on her pale, slender hand. Her hair was the same shining copper color as Poppy’s own wavy locks; her eyes, the identical emerald green.

The earl moved toward Poppy, skirting a small table and rounding a chair. He lifted her hand to his lips and brushed a soft kiss against her knuckles. “We shall do well together,” he said, in a low-timbred voice that should have sent shivers up Poppy’s spine.

She stole a glance at his perfect lips. She’d heard from her aunt’s maid, who’d heard from the maid of a widow who’d had an affair with him, that he was a splendid kisser.

“We should,” she said with a little intake of breath, “were we to marry.”

“What?” The earl’s voice became a mere squeak.

Poppy bit her lip. It was always at this point she reminded herself of the Spinsters Club and the vow she’d made with her two very best friends, Lady Eleanor Gibbs and Lady Beatrice Bentley. None of them would marry except for love.

And then, to inspire herself further, she imagined herself kissing Sergei.

“I can’t marry you,” she said to Lord Eversly, feeling braver now. “I’m so sorry.”

And she did feel sorry. He was such a dear.

He winced. “But your father said—”

She was reluctant to hurt him, but she told her usual story. “I’m to be engaged,” she said. “And it’s a love match. Surely you understand.”

“I demand to know his name,” the earl said rather breathlessly.

Sergei,
she wanted to say. But instead she said, “The Duke of Drummond.” Her tone was firm but gentle. She’d been through this scenario many times before.

Her other suitors believed she’d met the Duke of Drummond on a walking tour she’d taken in the Cotswolds, but he was totally fictitious, actually, a product of Cook’s lurid imagination. Cook enjoyed making up tales as she stirred her pots and chopped her vegetables, but that was part of her charm (if a floury-faced, wild-haired harridan in the kitchen who tippled occasionally could be called charming).

Indeed, just this morning, Cook told Poppy another outlandish tale about the duke. Poppy already knew he was the mightiest, fiercest duke ever to have walked the earth. And she knew as well that his ancestral castle jutted out over a cliff above the swirling waters of the North Sea. According to Cook, he’d murdered his brother so he could become duke, and to forget his guilt, he regularly plunged off this cliff for a swim. Occasionally, he came back up from the depths with a writhing sea creature under his arm, usually one with large, snapping teeth.

Today, Poppy learned the dreaded duke had even fought an octopus the size of a Royal Mail coach—and won.

“Did you say the Duke of Drummond?” the earl demanded.