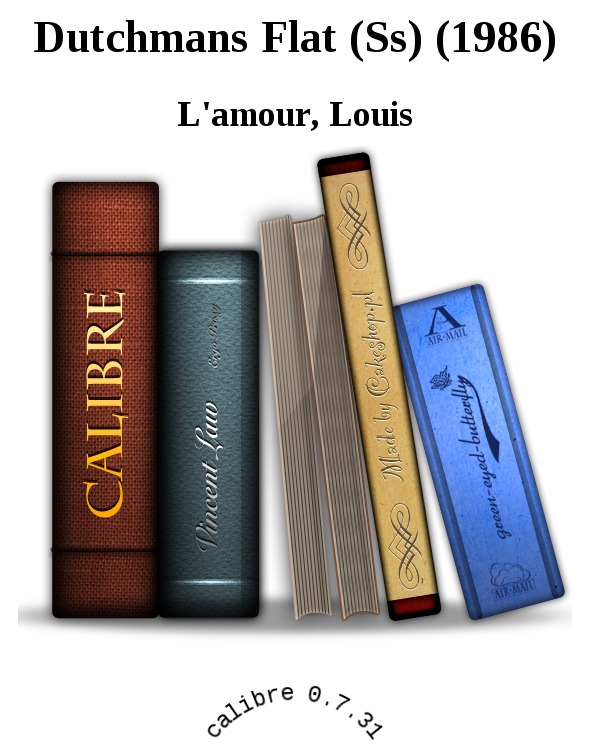 Mistakes Can Kill You
.

McQueen of the Tumbling K
.

The One for the Mohave Kid
.

The Lion Hunter and the Lady
.

The stories of the west are many, and few of them have been told. Many, of course, deal with land and cattle, with the business of simply getting from here to there, with soldiers returning from the Civil War, and of course, with the American Indian.

The wagon trains, the wild boom camps, the rail roads building, the adjustments, both mental and physical, to living in a different world with a different life-style, but, above all, the stories of the west are exciting because they are dealing with a selected people, selected by the circumstances.

Not everybody came west, not everybody wanted to. Those who came were the most adventurous-the hardy souls, both men and women, who were willing to risk everything to find a new life.

None of them were completely innocent as to the life into which they were entering.

As always, man looked westward through rose-colored glasses, seeing only the excitement, the chances for riches, a new life-few realized how hard it was going to be.

The frontier took care of that. Some of the newcomers turned tail and ran for shelter back home, some died of hard ship and disease, by accident and warfare of one kind or another. If you were not strong you either became so or you died, it was as simple as that. Stories of the frontier are exciting because they are about dynamic people, the ones who have been through the mill. The men and women who arrived in the west were survivors, they had to be. And they had to continue to survive.

No part of it was easy, and those who survived did so because they were capable of standing alone. When you get a bunch of individualists brushing against each other, there are always possibilities for trouble, for they were proud people, secure in themselves but apt to resent any infringement of their rights or what they conceived to be so.

Most men were honest. Those who were not were soon identified and the word went along the cattle trails and the stage roads. A man with a reputation for shady deals or dishonesty of one kind or another was soon relegated to doing business with his own kind. It was simply too small a population despite the size of the country. Western men and women had no secrets except those they brought west with them. Once arrived their lives became an open book. Most of the towns were of a few hundred people only, and those which were larger were made up of known people in most instances.

Once arrived in the west a man or woman soon became known by his or her actions.

If a stranger rode into town people were inclined to be reserved until they knew who and what he was. He would find courtesy but not acceptance until he had shown his colors.

Because western men and women were the sort of people they were, stories grew naturally from their actions and reactions. Yet it was the land as well as the people that bred stories, a harsh land but a land of beauty and one that must forever be a consideration in whatever one planned.

In the following pages are a few stories growing out of the westward movement. Distances were great, communications difficult or delayed, and much could happen while a man was off to fight a war or drive a herd of cattle to market.

Guns were used, but not carelessly, and there were men then as now who understand nothing else.

AUTHOR'S NOTE
Dutchman's Flat Everything a man does is indication of his character, whether he cheats at cards or takes an unfair advantage because it is legal.

This was probably more evident in the west, where a man's actions were often starkly revealed. The population was sparse, and there was, literally, no place to hide.

Occasionally I have become so involved with the characters in a story that I hesitate to let them go, and "Dutchman's Flat" was such a story. As a result I took the same basic situation and extended the story, much later, into a novel called The Key-Lock Man.

In another such case the short story "War Party" became Bendigo Shaffer.

Characters can become very real to their author, and often it is difficult to abandon them. One wants to know more about them, about their lives after the story in question, and the only way to know is to let the story tell itself. The story of the people in "Dutchman's Flat" is as revealing of western character as any I have written.

The dust of Dutchman's Flat had settled in a gray film upon their faces, and Neill could see the streaks made by the sweat on their cheeks and brows and knew his own must be the same. No man of them was smiling and they rode with their rifles in their hands, six grim and purposeful men upon the trail of a single rider.

They were men shaped and tempered to the harsh ways of a harsh land, strong in their sense of justice, ruthless in their demand for punishment, relentless in pursuit.

Kimmel spat. "He's welcome to it. That place starved out four men I know of." He stared at the hoof tracks ahead. "He's got a good horse."

"Sure. Not this side of his place, though. There ain't no shortcuts we can take to head him off, and he's pointin' for home straight as a horse can travel."

"Ain't tryin' to cover his trail none."

"No use tryin'." Hardin squinted his eyes against the glare of the sun. "He knows we figure he'll head for his ranch."

"He's no tenderfoot." Kesney expressed the thought that had been dawning upon them all in the last two hours. "He knows how to save a horse, an' he knows a trail."

They rode on in near silence. Hardin scratched his unshaven jaw. The dust lifted from the hoofs of the horses as they weaved their way through the catclaw and mesquite.

It was a parched and sunbaked land, with only dancing heat waves and the blue distance of the mountains to draw them on. The trail they followed led straight as a man could ride across the country. Only at draws or nests of rocks did it swerve, where they noticed the rider always gave his horse the best of it.

No rider of the desert must see a man to know him, for it is enough to follow his trail. In these things are the ways of a man made plain, his kindness or cruelty, his ignorance or cunning, his strength and his weakness. There are indications that can not escape a man who has followed trails, and in the two hours since they had ridden out of Freedom the six had already learned much of the man they followed.

And they would learn more.

The words sounded empty and alone in the vast stillness of the basin.

Hardin turned his head slightly so the words could drift back. It was the manner of a man who rides much in the wind or rain. He shifted the rifle to his left hand and wiped his sweaty right palm on his coarse pants leg.

"Some loose talk. He was in the Bon Ton buyin' grub an' such. Johnny said somethin' at which he took offense an' they had some words. Johnny was wearin' a gun, but this Lock wasn't, so he gets him a gun an' goes over to the Longhorn.

"He pushes open the door an' shoots Johnny twice through the body. In the back."

Hardin spat. "He fired a third shot, but that missed Johnny and busted a bottle of whiskey."

There was a moment's silence while they digested this, and then Neill looked up.

"We lynchin' him for the killin' or bustin' the whiskey?"

It was a good question, but drew no reply. The dignity of the five other riders was not to be touched by humor. They were riders on a mission. Neill let his eyes drift over the dusty copper of the desert. He had no liking for the idea of lynching any man, and he did not know the squatter from the Sorenson place. Living there should be punishment enough for any man. Besides "Who saw the shooting?" he asked.

"Nobody seen it, actually. Only he never gave Johnny a fair shake. Sam was behind the bar, but he was down to the other end and it happened too fast."

"What's his name? Somebody call him Lock?" Neill asked. There was something incongruous in lynching a man whose name you did not know. He shifted in the saddle, squinting his eyes toward the distant lakes dancing in the mirage of heat waves.

The comment drew no response. The dust was thicker now and Neill pulled his bandanna over his nose and mouth. His eyes were drawn back to the distant blue of the lakes.

They were enticingly cool and beautiful, lying across the way ahead and in the basin off to the right. This was the mirage that lured many a man from his trail to pursue the always retreating shoreline of the lake. It looked like water, it really did.

Maybe there was water in the heat waves. Maybe if a man knew how, he could extract it and drink. The thought drew his hand to his canteen, but he took it away without drinking. The slosh water in the canteen was no longer enticing, for it was warm, brackish, and unsatisfying.

"You know him, Kimmel?" Kesney asked. He was a wiry little man, hard as a whipstock, with bits of sharp steel for eyes and brown muscle-corded hands. "I wouldn't know him if I saw him."

"Sure, I know him. Big feller, strong made, rusty-like hair an' maybe forty year old. Looks plumb salty, too, an' from what I hear he's no friendly sort of man. Squattin' on that Sorenson place looks plumb suspicious, for no man can make him a livin' on that dry-as-a-bone place. No fit place for man nor beast. Ever'body figures no honest man would squat on such a place."

It seemed a strange thing, to be searching out a man whom none of them really knew.

Of course, they had all known Johnny Webb. He was a handsome, popular young man, a daredevil and a hellion, but a very attractive one, and a top hand to boot. They had all known him and had all liked him. Then, one of the things that made them so sure that this had been a wrong killing, even aside from the shots in the back, was the fact that Johnny Webb had been the fastest man in the Spring Valley country.

Fast, and a dead shot.

Johnny had worked with all these men, and they were good men-hard men, but good.

Kimmel, Hardin, and Kesney had all made something of their ranches, as had the others, only somewhat less so. They had come west when the going was rough, fought Indians and rustlers, and then battled drought, dust, and hot, hard winds. It took a strong man to survive in this country, and they had survived.
He, Neill, was the youngest of them all and the newest in the country.
He was still looked upon with some reserve.

He had been here only five years.

Neill could see the tracks of the buckskin, and it gave him a strange feeling to realize that the man who rode that horse would soon be dead, hanging from a noose in one of those ropes attached to the saddle horn of Hardin or Kimmel. Neill had never killed a man or seen one killed by another man, and the thought made him uncomfortable.