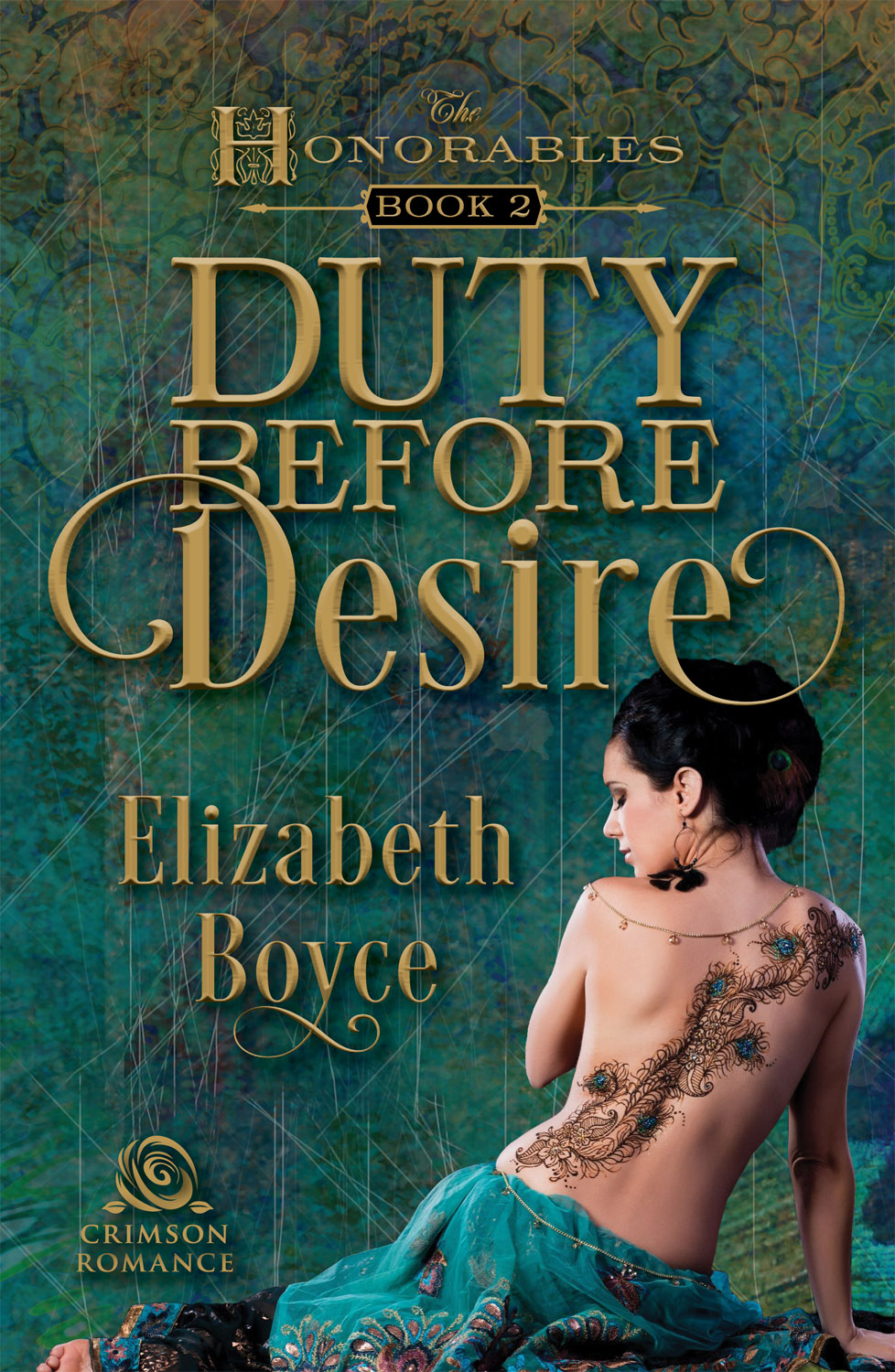 For Tara Gelsomino. Thank you for seeing me through.

Lord Sheridan Zouche was having trouble with his linen. A thin, damp fog wreaked havoc with his cravat, to say nothing of the sorry state of his collar. Grimacing, he plucked at the wilting material.

“Devil take it,” he muttered. “Anyone know if Dewhurst carries a looking glass in his bag?” he called out. “On second thought, no. Perhaps it's better if I don't know how shabby I appear.”

“Where the hell do you think you are?” snapped the giant at his side. Norman Wynford-Scott jostled Sheri's shoulder with an oversized paw. “For once in your life, would you be serious?”

Witnessing the normally unflappable man in a veritable lather did wonders for Sheri's spirits. “Right you are,” he said, leaving his neckcloth to its fate. He spun sharply on boots freshly blackened and polished with champagne to an immaculate shine and addressed the remaining occupants of his coach. “Step lively, lads. This way. Hop to.”

Henry De Vere clambered out, rubbing sleep from his deep-green eyes. “Shouldn't be chipper at this ungodly hour. It's deuced rude.” To their immediate north, the Thames was a hard, steel gray in the pre-dawn gloaming. Henry's jaw cracked on a yawn.

“The secret is not to go to bed. At least,” Sheri said with a smile, “not to sleep.”

Glowering darkly, Henry muttered invective against the menace of confirmed bachelors. Married just two weeks ago, he'd spent most of the ride through Mayfair and Chelsea grousing at Sheridan for robbing him of his domestic comforts.

The last occupant of the coach, Harrison Dyer, descended from the carriage with a long, flat box tucked under one arm and a grim set to his stubbled jaw. “Tyrrel is here ahead of us.” He indicated with his chin the black carriage at the far end of Battersea Fields.

Two men stood near the vehicle while a third, solitary figure, dim in the gray mist, paced a short distance away. A distinctive limp identified the man as Lord Tyrrel. The orange ember of a cigarillo intensified, then faded, as Tyrrel drew on it.

“I'll speak to his men.” Harrison clapped Sheri's back and strode to meet the seconds of the offended party.

It had been deuced bad luck that Tyrrel walked into his wife's bedchamber two nights ago. The man hadn't been expected back from his hunting trip for another week, and he'd not made so much as a peep as he entered the house. It was well known that her ladyship had a string of paramours over the last five years, of whom Sheri was just the most recent.

Having already spent several nights together, Sheri and Sybil had moved beyond the fundamentals of coitus and were becoming a little more creative in their bed play. That particular evening had involved various foodstuffs. Sybil had been lying on her stomach, and Sheri had scooped dollops of blancmange in a line down the column of her spine. Naked and aroused, he'd been poised above her on hands and knees, licking and nibbling his way up her back, at the moment her husband entered the room.

Sybil had gasped and started to move, setting all the bits of dessert to quivering like frightened baby bunnies. Perhaps he lacked some vital instinct for survival, Sheri reflected, or maybe he was just too accustomed to his dissipated pastimes. In any event, when Lord Tyrrel happened upon them, Sheri didn't make a run for his breeches; rather, he'd laid a calming hand on Sybil's haunch and met the furious, shocked glare of his host with a steady, amused gaze. Then he'd offered the man a spoon.

He was more than a bit nonplussed over being the instrument by which Tyrrel chose to restore his manly honor.

A dull rumble announced the approach of another carriage. Within seconds, a hackney coach pulled in behind Sheri's equipage, and Brandon Dewhurst hopped out, surgery bag in hand.

“Sorry I'm late,” he said. He spoke to the driver, then joined Sheri, Norman, and Henry. After another moment, Harrison returned from his
tÃªte-Ã -tÃªte
with Tyrrel's representatives. In the center of their protective ring, Sheri slowly turned to meet the eyes of each man. He couldn't help but feel a lump of gratitude in his chest.

Tasked with naming his seconds for the duel, Sheri had quickly dispatched notes to his tight-knit group of friends, the Honorables. They'd been drinking companions at Oxford, meeting frequently at The Hog's Teeth tavern, facing the crucible of those final steps into adulthood around a rough-hewn table. “The Honorables” derived from the fact that though each man was the scion of an aristocratic family, none of them would inherit a title. They were each The Honorable Mr. So-and-so.

Technically, he,
Lord
Sheridan, second son of the Marquess of Lothgard, was not honorableâliterally and figurativelyâbut courtesy title notwithstanding, he was legally a Mister, just like his friends.

Now, on the dueling ground of Battersea Fields, Sheri had never felt the appropriateness of the name more. Pressing a hand to his chest, Sheri bowed. “Thank you all for coming, gentlemen.”

Henry lifted his hat and swiped a hand through his hair. “Was that a note of sincerity I detected? Don't tell us you're actually worried.”

“He should be,” Norman snapped. “Tyrrel is reputed to be a crack shot.” Standing well over six and a half feet tall, the large man's disapproval seemed to fall quite a distance before it reached Sheri.

With a dismissive flick of his hand, Sheri scoffed. “How good could he be? He returned home early from his trip. I'd wager he challenged me after already having been bested by every beast in Scotland, who laughed him over the border with his tail 'twixt his legs.”

Crossing his arms, Norman muttered, “Unless he came home early because he shot them all and had nothing left to do.”

Squinting at the lightening sky, Harrison said, “Nothing to fear, Norm. Tyrrel intends to shoot wide. It's satisfaction he wants, not blood. Our Lothario will be seducing the ladies tonight.” His brandy eyes flicked to Sheri. “It's time.”

Brandon held up a hand. “Just a moment.” He produced a flask from the inside pocket of his great coat and unscrewed the cap. “A dollop of Dutch courage.”

Sheri took a swig of the gin. Nerves he would never admit to had kept him awake for nearly twenty-four hours, so he appreciated the stringent vapor of juniper that curled up the back of his nose and sharpened his focus.

After passing the drink around, the circle broke up. Harrison met Tyrrel's second at the weapons table to inspect and load the pistols, while Brandon took a position off to the side, surgery bag at the ready. Norman loped to the center of the field and fished out a handkerchief, as Henry and Tyrrel's other man paced off the distance.

With all the fellows busy at their appointed tasks, Sheri was left alone. A pang of loneliness, or maybe nostalgia, ached in his chest. Turning so the others couldn't see him, he fumbled at his waist to detach the fob that secured his omnipresent quizzing glass to his person by means of a silver chain. The silver fob was round, a little larger than a guinea, and puffed like a delicate sea biscuit. Embellished with the Zouche family crest, the fob reflected the weak morning light in undulating gray lines.

Pressing his thumbnail into a recess on the edge, Sheri popped the fob open, revealing a miniature portrait of a young girl, which he cradled in his palm. She smiled at him shyly, her lively brown eyes hinting at impishness. Not for the first time, Sheri felt a rush of gratitude to the portraitist who had managed so perfectly to capture the way Grace's lower lip curled over her teeth when she smiled and the stubborn lick of brown hair that liked to escape her ribbons.

“Miss you, Grace,” he said as he always did, as he always had done.
Miss you, Sheri!
she used to call back when he took his leave of her cottage. She hadn't mastered many words in her twelve years, but those three had always rung out clear and true.

“I won't ask if you've got any sway up there,” he murmured. “I don't suppose I've a single favor to call in, even if you had. But if you could spare a few moments to be with me now, I'd be much obliged. You'd laugh yourself silly at the scrape I've gotten myself into this time, Grace, you really would. So maybe linger a bit for the entertainment, if nothing else.” He smiled sadly, a poor imitation of the expression captured in the tiny portrait. “And if things go badly here, then we'll see each other soon. We'll play snakes and ladders, all right?”

Sheri snapped the fob shut and returned it to its place on his waistcoat, then went to his mark.

Twelve paces away, Tyrrel joined Sheri on the field of honor. The challenger gave Sheri a long, hard stare.

Beneath the other man's scrutiny, a vague feeling of embarrassment stole through Sheridan at being caught up in something as sordid as a duel. In his long, storied career of fornicating, this was the first time he'd been called out. On the surface, it seemed remarkable that after sleeping with dozens of married women he'd not once been called to task for it, but Sheri was meticulous about discretion. He was interested only in seeking pleasure with enthusiastic partners, not in causing trouble for the women he bedded, their lawful husbands, orâmost importantlyâhimself.

Inside his kid gloves, which he'd purchased for the occasion of his first duel, Sheri's palms began to perspire.

The seconds broke away from the weapons table, each making for their respective principal. Harrison held the gunâone of the two he always carried about his own personâacross his flat palms and presented it to Sheri.

Naamah's Curse by Jacqueline Carey
The Private Patient by P. D. James
The NightMan by Mitchell, T.L.
Walk on Water by Laura Peyton Roberts
Bittersweet (Xcite Romance) by Turner, Alyssa
Territorio comanche by Arturo Pérez-Reverte
Beckman: Lord of Sins by Grace Burrowes
The City on the Edge of Forever by Harlan Ellison
Blue Autumn Cruise by Lisa Williams Kline
Without a Past by Debra Salonen
Our partner