Read Dwellers of the Night: The Complete Collection Online

Dwellers of the Night: The Complete Collection 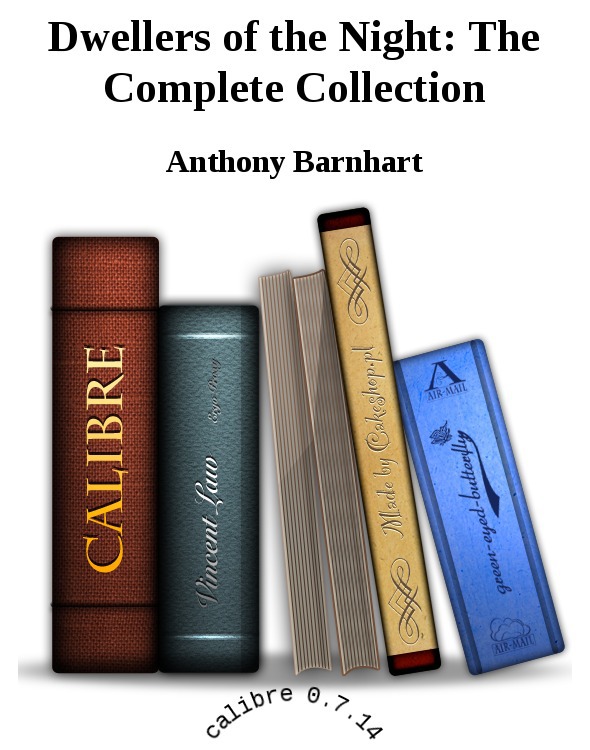 SUMMARY:
A trilogy detailing the arrival of an airborne disease that thrusts the majority of the human race into a comatose state before resurrecting them as vampire-esque monsters. The story follows one man and several companions in their struggle for survival and, above all, hope.

A POST-APOCALYPTIC NOVEL BY

THIS WORK OF FICTION IS DEDICATED TO

MY GOOD AND LOYAL FRIEND,

Prologue: The Eve of the Nightmare

Chapter Four: The Order of the Ravens

Chapter Five: The Laughter of the Pleiades

Chapter Six: The Realm of the Night

Chapter Eight: The Screams of the Damned

Chapter Nine: The Legend of the Vampire

Chapter Eighteen: The Legacy of the Zombie

Chapter Nineteen: As the Rain Falls

Chapter Twenty-One: When The Sun Shall Never Die

Chapter Twenty-Three: They Own the Night

Chapter Thirty: The Children of the Corn

Chapter Thirty-Two: The Girl in the Yellow Dress

Chapter Thirty-Three: The Angel & Her Dress

Chapter Thirty-Six: The Weeping of the Damned

Chapter Forty-One: No Baptism, No Reprise, No Sweet Kiss

Epilogue: The Dawning of a New Age

The Eve of the Nightmare

The day begins like any other for the Siberian town of Oksino. The sun has risen early, and children don themselves in overcoats to protect against the cold as they make their way to be picked up for school by rusted busses long in need of repair. The ride to school goes slow and monotonous, and the children press their noses against the frosted glass windows of the bus to watch the landscape passing by: twisting streams, stretching grasslands, and Asian mountains rising in the distance. The Trans-Siberian railroad can be seen through broken mists as the sun rises higher above the snowcapped Altai Mountains. The busses arrive at the school late, and the children flood into their classrooms. The cafeteria and the boarding house are in different buildings along opposite ends of the village, and the school sports no gymnasium. The walls are colored with chalk and falling apart; many of the desks are broken, and the electricity in the room often shorts-out. They file into their classrooms and sit down, talking hurriedly amongst themselves in the Russian tongue. Many of the children are direct descendents of the Pazyryk, an ancient people who lived in the land thousands of years ago, of whom mummies have been found frozen in permafrost. Many Bronze Age tombs have been dug up, and their findings hint that the Pazyryk culture may have been loosely connected with the ancient Scythian culture to the west. Most of the children’s parents make income working in the oil fields or doing agricultural work; fewer belong to ranching families, being threatened by the Russian government for hunting such species as Argali Mountain Sheep, the steppe eagle, and the Black Stork.

The teacher enters the room and tells the children to sit down. He walks by the windows and pulls up the blinds, early morning light filtering over the children’s faces. He stands before the class and opens an old textbook, long outdated; no money can be found to purchase new textbooks, and basic school supplies—paper and pencils—are hard to come by. The lights flicker, and the teacher grumbles. A moment later there comes a strange screaming noise, coming from above them. He lets the book shut and looks upwards, wondering if the noise comes from the electrical generator. The numbing silence is broken as kids start shouting and leaping from their seats. The teacher hurries over to the window, pushing kids out of the way, peers out: above in the brilliant blue skies, what looks to be a comet streaks overhead, leaving in its wake a plume of black smoke wreathed in fire. A moment later it disappears beyond the mountains. There comes a quick shudder under their feet, then what sounds like the roar of an airplane: and the windows burst outwards, spraying into the children, who scream and dive to the ground. The building shakes and dust falls from the rafters. And then it is over.

The teacher draws a deep breath and pulls glass from his hair. He asks if everyone is okay. A few scratches, nothing bad. His heart sprints. He put on a calm voice and tells the kids to sit down. As they take their seats, the door to the classroom opens and another, older man enters. He speaks privately with the teacher, then leaves the room. The teacher approaches the class, and tells them,

нормальный,” which means, in English: “A Russian satellite has crashed beyond the mountains. Anthony Barnhart

What we felt was nothing more than the shockwave. Everything is okay. I have been told to continue with the lesson as normal.” He continues teaching the children.

A moment later, a slight headache begins to come over him. It only becomes worse as he teaches, and several students complain of having similar headaches. The teacher tells them that it is because of the shockwave and all the excitement, and there is nothing to be concerned about. The headaches, however, become more and more intense. The teacher stops teaching and sits down. Each breath sends a thousand burning splinters into his brain. He holds his head in his hands and feels ready to throw up. He opens his eyes, and the meager light from the windows burns through him. His fingertips and toes begin to tingle. Some of the kids began to act strange: one begins walking around, murmuring nonsense under his breath; another girl sits on her desk and begins singing a Russian lullaby; another kid steps through the broken window and begins running around outside, laughing hysterically; and another kid begins to tear off his clothes, stripping down to nothing, shouting (in Russian): “She won’t have me! She won’t have me!”

The teacher does nothing, for he is losing all sense of self-awareness. He stands and staggers into his office, mumbling hot-headed conspiracy theories. He reenters the classroom. One of the kids is lying on the floor, writhing and convulsing. The kids stand and say hello to their teacher, saluting. Blood trickles from their noses, eyes, and ears. The teacher feels blood coming down from his own nose as he raises the Ak-47 and begins firing. The children are thrown back by the bullets, laughing the entire time, and are thrown amongst the desks and chairs; bullet-holes scatter over the walls and punch holes in the dirty tile floor. Blood runs down from the children’s bodies. The teacher falls to his knees, blood gushing from every opening in his body—his nose, ears, mouth, and eyes—and his shirt becomes soaked with blood as he pitches over and dies, hailing Old Russia as salvation and victory.

“For certain is death for the born

And certain is birth for the dead;

Therefore over the inevitable

Thou shouldst not grieve.”

A calm and steady rain has fallen all day, sweeping in from the north and blanketing the city. It had come on strongly; he had stood outside on his back porch, looking up at the sky, waiting for her to return home. Now the ink-black clouds roll over the city, one after the other, choking the weeping evening sunlight. The clouds cast murky shadows over the skyline and the surrounding hills, and in a flash of lightning and a peal of thunder, the clouds spin and dance, rain coming down so hard that a thick mist comes off the roads and wraps around the steel skyscrapers. The clouds tumble over one another in a rhythmic ballet before finally dissipating, and as they meander above, they continue to weep. The gutters fill with water and the downspouts roar. A stiff breeze comes up and rustles through the leaves of the single oak in the backyard. He stands under the overhang and feels the humidity vanish with the downpour, lighting a cigarette in the cup of his hand, protecting it from the wind. He leans against the aluminum siding and feels the smoke curl in his lungs, then exhales and sends it disappearing into the steady rains. He hears the sound of the engine in the driveway, muted by the thunder. He tosses the cigarette and opens the sliding door, and he finds her setting down her bags on the counter. He smiles and goes forward, embracing her.

“Can I kiss you?” he asks tenderly.

She smiles, kisses his forehead. “That’s all you get,” she teases.

She pats him on the chest, stepping back. “You know I don’t kiss you after you smoke.”

She leans forward, as if she is about to kiss him, then pulls her lips to his ear and whispers, “I can smell it on your clothes.” She steps back. “I’m going to shower. You need to shower, too. We’re going to the theater tonight, or have you forgotten?”

“It’s in an hour, so we have to shower quickly.” She turns and heads down the hallway. He follows after her. “You know, we could both take longer showers… If we showered together.”

She turns and hugs him, squeezing him tight. “You’d like that, wouldn’t you?”

“You need to make up for not kissing me. That was harsh. And cold.”

Thunder sprinkles outside. They can hear the rain drumming on the roof. She smiles, her eyes sparkling. “Okay. But brush your teeth first.”

They load into the purple Escort and pull out of the driveway. Their house rests against a hill in what is known as Lower Price Hill, a segment of Price Hill, a suburb of Cincinnati. The town sits upon the curves and ridges of what had once been known as Mount Harrison. The city of Cincinnati, which could be seen sprawled out like a blanket from Price Hill’s hillside communities, graces the nickname

“City of Seven Hills,” named after Mount Adams, Walnut Hill, Mount Auburn, Vine Street Hill, College Hill, Fairmont Hill, and Price Hill (though more than seven hills pepper the area around the city). Price Hill had at one time been a haven for the rich and famous of Cincinnati, reached only by a streetcar that scaled up the hillside. The haven promised fresh air, suburban living, and tree-shaded sidewalks; Victorian houses and ornate 19th-Century mansions had been built, though now many of these had been torn down or slept in ruin.

“If only we lived here one hundred years ago,” Kira would muse.

He would always make the come-back: “But then we wouldn’t be enjoying each other here, now.”

The town quickly became packed with shops, businesses, theaters, churches, schools, and community centers. The residents of the devilish and feared “Over the Rhine” (the heart of sin in Cincinnati) had been migrating to Price Hill, and prostitutes and drug deals went down all over the place. Murder was not uncommon: last Halloween several youngsters went door-to-door knocking, saying trick-or-treat, then gunning down the residents until they were captured by the police. Kira would complain, “I don’t feel safe living here.”