Read Dyed in the Wool Online

Dyed in the Wool 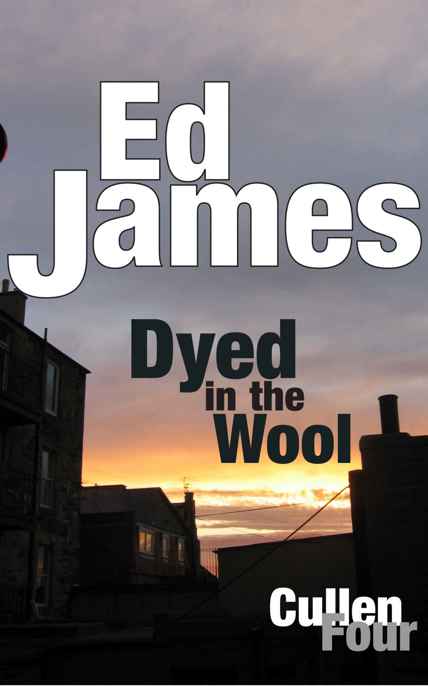 DYED IN THE WOOL

OTHER BOOKS BY ED JAMES

1
GHOST IN THE MACHINE

2
DEVIL IN THE DETAIL

3
FIRE IN THE BLOOD

4
DYED IN THE WOOL

SHOT THROUGH THE HEART, a standalone supernatural thriller

For Andrew and Pat

DYED IN THE WOOL

He stood back and watched his work, glancing over. "The breeze is a lot stronger up here."

The Range Rover started moving, slow and unsteady, then accelerating until it tipped over the edge of the plateau.

He flinched. "He's supposed to be unconscious."

"I know. Don't know what happened there. Not my department."

"It's a crime whether he's dead or alive, awake or asleep."

Resisting the urge to shake his head, he watched the SUV as it raced down the small hill, becoming an orange blur. Halfway down it lost grip, listing to one side before tumbling over and rolling to the bottom, where it bounced across the scrub land beyond. It shuddered to a final halt, crumpled and ruined, sitting on its roof.

The other man rubbed his hands together. "That's the ticket. Our friend will be as battered as the motor."

"Come on." He started back to his Land Rover, ready for their own controlled descent. "I'll have to call the police now."

Detective Constable Scott Cullen parked and got out. He locked the door of his Golf, checking all four buttons were down. He really should get a new car.

He crossed the road before walking up the short garden path. He knocked on the door and stepped back. The house was a post-war semi, the long street populated entirely with them, all with subtle differences - ivy, cladding, paved drives, front gardens, porches, conservatories. The street that could just as easily be advertised as any of three areas, depending on which was more in vogue at the time, Trinity holding the current edge over Granton and Newhaven.

The door opened, the noise of drunken chatter bursting out, accompanied by the tang of cigarette smoke. DS Sharon McNeill scowled as she stepped onto the porch, closing the door behind her.

She raised her eyebrows. "Forty-five minutes is a lot to make up for, Scott. Your dad and my mum are both hammered."

"My counselling ran over and the traffic was a nightmare."

"This is a bloody nightmare."

Cullen rubbed his forehead. "Sorry, this is my fault. This was all my idea. Dinner with both sets of parents. What was I thinking?"

"When you suggested it I thought it was quite romantic. Now… Bloody hell."

He touched her arm. "Well, I'm here now. I'll give you some respite care."

She laughed. "You owe me for this. Big time."

She grabbed him and kissed him. "That's just a taster."

"I can taste red wine. I suppose I'll be driving, then?"

"If you can call what that car does driving." She pulled him inside by the hand and led him down the long corridor, decorated in magnolia and pine.

He hung his suit jacket up on the coat rack halfway down, glancing at a photograph he'd never seen before. Sharon in her twenties, posing moodily for the camera. She looked thinner than was healthy, a lot lighter than her slightly voluptuous frame now. Her hair was in a sort of wedge cut - shaved up one side and flicked over. He pointed at it. "When was that?"

She closed her eyes briefly. "Mum just found that the other week. There are another five new photos of me she's put up. None of Deborah, so it must be for your parents' benefit."

Cullen laughed. "I love the look. Maybe you should go back to it."

"That was after I came back from university in Aberdeen." She prodded him in the chest with her finger. "That's the last I want to hear of it."

"So, aye, Mary found this box of old photos of Sharon when she was cleaning out the spare bedroom the other week." Brendan McNeill started handing around the first in the pile, similar to the one in the corridor. He looked over at his daughter and grinned, a mixture of pride and pleasure in making her feel awkward.

"That haircut didn't exactly suit you, did it, princess?" He playfully grabbed Sharon's cheek.

"There's a couple of good shots in there, though, as well." Mary McNeill was slightly slurring her words. "A lot of memories, good and bad."

"We've got some lovely shots of Scott" Liz Cullen reached down to her handbag.

"We've a lot more photos of his sister." David Cullen's thumb drumming on the dining table was irritating the shit out of Cullen already. "That's what happens, though. You get a new camera for the first born and take as many photos as you have rolls of film. By the time wee Scotty came along, we'd seen it all." He laughed. "Well, almost all. The bath times were different." He made a hook with his finger.

Mary and Brendan fell about.

"Cheers." Cullen fired daggers at his dad with his eyes.

"It was the same with our two." Sharon's mum drained her glass. "Lots of photos of Sharon and hardly any of young Deborah."

"What makes you think that?"

"She's settled down, got married and had wee Rachel. I'd just assumed."

"It's funny how they drift apart, though." Cullen's dad handed the last of the photos on to his mother. "Scott's sister lives in Edinburgh again and how many times has he seen her?"

"We're both really busy." Sharon leaned in towards Cullen. "Working in CID isn't really a nine-to-five job, despite what it says on the tin. We can get called away at all hours, get kept back for any amount of time. It's not easy arranging to meet someone at the weekend."

"Sharon's right." Her dad settled forward on his forearms. "You know I was a sergeant in Lothian & Borders. I worked in CID for about a year in total. It's not easy. It's hard holding a marriage or relationship together with those hours, let alone be social." He reached over and held his wife's hand, making her giggle. "Mary was always very forgiving of the hours I worked. In some ways, I wish I'd had a more fixed working pattern but I can honestly say I made a difference to the wider world."

"Don't see why you can't make an effort to see your sister, that's all." Cullen's dad held his gaze for a moment then broke off.

Cullen took a long drink of his orange juice, wishing it was something stronger.

Sharon's mother got to her feet. "Who's for coffee?"

She took three orders then got up and collected the dinner plates.

Sharon's distinct ringtone blared out from the hall - that Texas song Cullen really hated. She smiled. "I'm leaving it."

Cullen raised his eyebrows. "On your head be it." His mind whirred through the possibilities. He quickly settled on DI Brian Bain, her boss and his until recently. He'd be stuck with the parent-sitting. Shite.

Cullen's phone rang this time. He got to his feet. "Detective Constables don't get the chance to turn down calls."

He went into the hall to take it, not recognising the number. At least it wasn't Bain. His network of contacts in West Lothian and Edinburgh got through phones and SIM cards at a ludicrous rate.

Cullen could only vaguely place it. "Who is this?"

There was a pause. "Scott, it's Alison Carnegie. We had a thing last summer."

Cullen walked further down the hall, feeling guilty at getting that sort of call at Sharon's parents'. "I thought I told you to stop calling me?"

She exhaled. "I know. Look, I've been going to a different counsellor and he says I need closure on my relationship with you."

"Look, there was no relationship."

"I appreciate you've been going through some hard stuff. Believe me, I'm sorry about what happened, but I don't think I've got anything to say that could help."

"Let me be the judge of that. I need closure on what happened. I need you to help me."

"You need to move on with your life. I'm not who you thought I was. What happened between us - what you think happened between us - just didn't happen. It was someone else using my account on Schoolbook. I know I saved you, but that's what I do for a living. I'm nobody's hero, believe me. You have to drop this."

"I probably am." He ended the call, pocketing the phone but staying where he was.

Why hadn’t he spoken about Alison to his counsellor? She was part of the past, something he didn't want to deal with any more.

Cullen felt a buzz in his trousers. He looked at the phone - Bain.

"Here, Sundance, where's your bird?" Bain was outside - wind rapping against the microphone on his mobile.

"How come she's not answering her phone, then?"

"Must be on silent." That was one she owed him.

"Right, well, just as well you're behaving cos I need both of you out here."

"Your old patch. The bings just off the M9 by Kirkliston. Head to Winchburgh. There's a mobile Incident Room set up there. Some uniform plod will get you up here."

"Some boy's driven off the side of the bing. Looks a bit fishy."

"None of that shite, Sundance. The pair of you need to get out here. Turnbull's orders."

Cullen went back through to the dining room. His mother had disappeared - presumably to help with coffee and loading the dishwasher - leaving Sharon to listen to their dads taking a shared delight in the plight of Rangers. "Wondered how long it would be before a Hibs and Aberdeen fan got round to discussing Rangers."

Sharon's dad grinned. "Got what was coming to them, Scott."

Cullen smiled at Sharon. "We've got to get back to work."

"See what I mean?" She sighed as she looked at both fathers. "I'll better get some coffee from Mum."

"So what did he say?" Sharon took a sip of coffee from a travel mug.

Cullen pulled her car - a sporty Focus - onto Ferry Road and shot off to avoid the Merc bearing down on them. "Usual Bain vagueness. Someone's taken a tumble off one of the bings. Get out to Winchburgh."

"How long have you lived in Edinburgh for? Big piles of shale from when they used to get gas out. Huge red mounds you see from the M9."