Read Dying for the Highlife Online

Dying for the Highlife 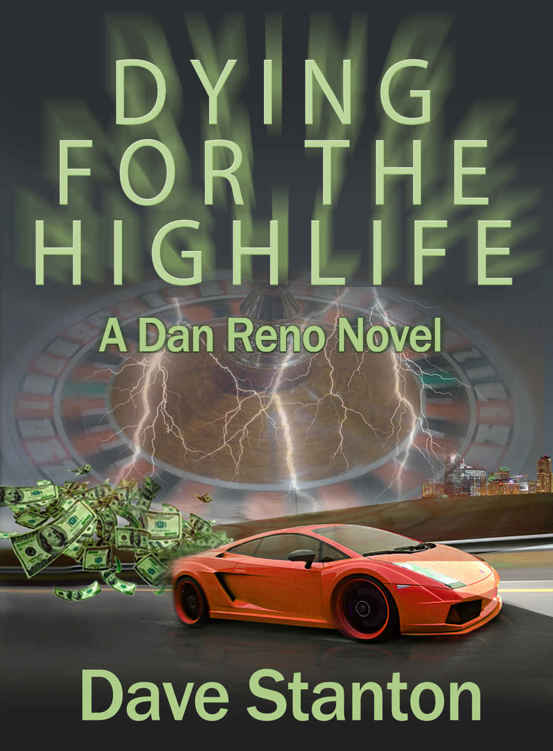 DYING for the
HIGHLIFE
A DAN RENO NOVEL

This book is a work of fiction. Names, characters, places, and incidences are products of the author’s imagination or are used fictitiously. Any resemblance to actual events or locales or persons, living or dead, is entirely coincidental.

For Austin and Haley

S
ay you’re on a wandering drunk binge. The year you spent on the wagon seems a lifetime ago, a life that ended when you came back to the bottle like a soldier coming home after a long war. You don’t remember the day you decided to have a quick taste, just one, and then it would be back to your predictable, sober life. But there’s no such thing as “just one,” you always knew that, and you stayed drunk from that moment, as if it were the most natural process in the world.

Then you run out of money, taking odd jobs to stay afloat, until one morning you wake up in some unknown town out in the godforsaken Southern California desert. You crawl from your bed and step into the parking lot of the fleabag boardinghouse you call home. And for some reason, as you hike down the empty street to your day labor job, you suddenly take a hard left and walk straight out of town, out onto the ancient, sunbaked sand and rock of the earth’s floor. You walk through the sagebrush and thistle, heading east toward the horizon, as if the vastness of the land holds some sort of mystical answer to your life.

Before long you fall to the ground and sleep in a patch of shade. Around noon you wake up, parched, confused, your lips so dry they’ve split, your hair gritty and hanging in your face. Automatically you trudge back toward the distant buildings that shimmer in the heat, sadly but stubbornly beckoning you back to a life you gave up on for no reason you can remember, and traded in for a bottle of whiskey.

But you’re broke again, and you got to eat, so it’s back to another day of bust-ass, miserable hangover work, with only the prospect of begging a front for chow and liquor to look forward to. That night, for the hell of it, you buy a two-dollar state lottery ticket, get drunk on a quart of beer and a half pint of cheap bourbon, and dream of an existence so farfetched that you almost cry when the gray light of dawn creeps through the ratty curtains in your room and wakes you from your drunken fantasy.

You walk down the deserted street with your head hanging from your shoulders like a bag of wet sand, and stop at the twenty-four-hour market to spend your last four bits on a cup of coffee. The clerk runs your Lotto stub through the machine, and you’re halfway out the glass door before his frantic screams jolt you out of your stupor. You stare at him with bloodshot eyes, a Styrofoam coffee cup shaking in your dirt-caked fingers, the steam rising to your trembling mouth. And you listen to him tell you that you’ve just become a rich man.

The conference reception room at Caesars was crowded with men in business suits. They milled about, talking in clusters of four or five, juggling beer bottles and little plates piled with meatballs and stuffed mushrooms. Most of them appeared gregarious and energetic, and they all seemed to be talking over one another, as if they were competing to be heard and recognized.

Out of boredom, I summed up the group from behind the bar. Salesmen, probably. Too well dressed to sell cars. Maybe they were in technology, or real estate, or stocks. Whatever their industry, it was obviously male dominated—there wasn’t a woman in the room. I sighed, and tried to ignore their loud verbal jousting and artificial enthusiasm. Two men leaned on the bar and ordered drinks, their brows wrinkled, discussing some financial matter. I mixed their cocktails stronger than I should have, silently wishing them shot nerves and drinker’s remorse. Then I poured myself a discreet drink, with the expensive scotch. On their tab, of course.

You could feel the atmosphere in the room change when the lady walked in, as if sunlight had cut through a thick fog. The hubbub faded as every head in the room turned in her direction. She had straight, dirty blond hair that fell over her bare shoulders and onto a silky blouse a bit too sheer to contain her breasts in a manner suitable for proper company. Her black skirt was more conservative, but still showed off her slim waist and the sweeping curve of her thighs. But it was her eyes, sparkling like dark diamonds above her high cheekbones, that really caught my attention.

She walked toward the bar, her hips swaying in a tantalizing rhythm. I couldn’t help but stare, and she met my gaze with the beginnings of a smile on her sensual lips, or maybe it was a smirk.

The silence was awkward only for an instant, like a record had skipped, then the buzz of voices resumed. But it was obvious the room had a new focal point. Before she reached the bar, a tall, well-built man in a dark blue suit and maroon tie fell in step with her. His eyes were unnaturally green, his hair blond and perfect, and he moved with the confidence of a lady’s man in his prime. He escorted her to the bar, his hand touching her elbow.

“Hello,” he said, smiling to show off his expensive teeth. “Buy you a drink?”

He snapped his fingers at me without taking his eyes from her.

“Yes, I’d like that,” she said, then plucked his hand from her elbow and flicked it away like a used tissue. “As long as I don’t have to drink it with you.”

“Are you serious?” he said.

“I don’t have time for fun and games. You want some action, go jump your secretary.”

The man walked back toward his associates, who were watching him expectantly. He stuck his hand in his pocket like he was searching for some lost article, and smiled bravely, as if his nuts were in a vice and one false move would tighten the crank.

“Sapphire Martini, dry, three olives,” she said. I mixed her drink and smiled.

“That was well done, ma’am. But this is a private party,” I said.

I smiled wider. “Do you always crash company cocktail parties?”

“No,” she said, sipping her martini. “I don’t make a habit of it. And frankly, I don’t have that kind of time to waste.”

“I know of no better way to waste time than sitting on a barstool,” I said.

“Yeah, I spend hours coming up with stuff like that.”

I winced, as it occurred to me she might be a summons server, or maybe worked for a bill collector.

“I’ll have to remember that,” she said, lowering her eyelashes and sipping from her drink. “So, Cody Gibbons gave me your name and told me where to find you. My stepson is missing, and I need to reach him as soon as possible. He was last seen here in South Lake Tahoe. Cody said you do this kind of work, and that you’re the best.”

“Cody Gibbons is a good buddy of mine, so his opinion’s probably biased,” I admitted.

“I hope I didn’t drive all the way here for nothing.”

“From San Jose?” I said. It was where Cody lived and where I used to, a four-hour drive from Lake Tahoe.

I pulled the stops from the three bar sinks and watched the water begin to drain, then looked at the lady. She was nearly beautiful, but up close the hard edge to her eyes was a distraction. So was the small pendant that dangled in her cleavage and touched her well-rounded breasts, which were held in place by the skimpiest of bras.

“My shift’s over in half an hour. How about we meet in the casino lounge, over near the sports book?”

“See you there,” she said, and she finished her drink and slid off the barstool. I watched her walk away, and I could tell by the way she strutted she knew everyone in the room was watching.

I
announced last call and served another quick round, then closed the bar and headed out to the casino. The walkways were clogged with gamblers and the card tables and rows of slots were packed three deep. Waitresses glided through the crowds, balancing full trays of free casino drinks—rum and Cokes that tasted like watered-down caramel, syrupy gin tonics, and Vodka Collins I swore were spiked with cleaning fluid. People who live in Nevada know casino work is a sure thing, but also a dead-end gig. A large casino can generate staggering revenues and profit, but most casino workers are paid minimum wage, earn meager tips, and have to tolerate drunken, surly tourists losing money they can scarcely afford to part with.

The bartending gig at Caesars was something I took after my aspirations for a successful private detective agency in South Lake Tahoe became a sad delusion. The small mortgage on my wood-sided A-frame home now threatened to outstrip my monthly income, and I would be short on this month’s payment. Unless I improved my financial situation, I’d have to face the grim prospect of selling out and moving back to the rat race, back to San Jose. So when the strange lady showed up, bearing the prospect of paying detective work, I didn’t try too hard to hide my interest. Maybe this was the break I needed, the beginning of good things. I yanked off my clip-on bowtie as I approached the sports bar, and resisted the urge to drop it in a trashcan.

She waited at a table, the highlights in her hair glowing under the dimmed lighting. Three men at the bar had swiveled their seats outward so they could eyeball her more readily. I pulled a rumpled card from my wallet as I approached her. It’d been a while since I’d looked at my own card, and it suddenly seemed very plain and unimpressive. It simply read:
Dan Reno—Private Investigations.
I thought fleetingly if I might somehow improve the card.

“Let’s start with your name, ma’am,” I said, sitting and grabbing a keno pad to take notes. I wanted to get down to business, but when I looked up I was again struck by her, not only on a visual level, but more by a certain aura she projected. Her presence was no doubt sexual, but there was something beyond that, something classy and sultry but also hard edged and manipulative. I didn’t know quite what to make of her. I got the distinct impression she’d be equally at home in a biker bar or at a highbrow party for rich socialites.

Darkness Returns by Rob Cornell
The Fermi Paradox Is Our Business Model by Charlie Jane Anders
Voidhawk - Lost Soul by Halstead, Jason
Always by Stover, Deb
The Hess Cross by James Thayer
Purposes of Love by Mary Renault
The Many Sins of Lord Cameron by Jennifer Ashley
Murder on the Cape Fear by Hunter, Ellen Elizabeth
How to Write by Gertrude Stein
Instinct by J.A. Belfield
Our partner