Read Dying Is My Business Online

Dying Is My Business 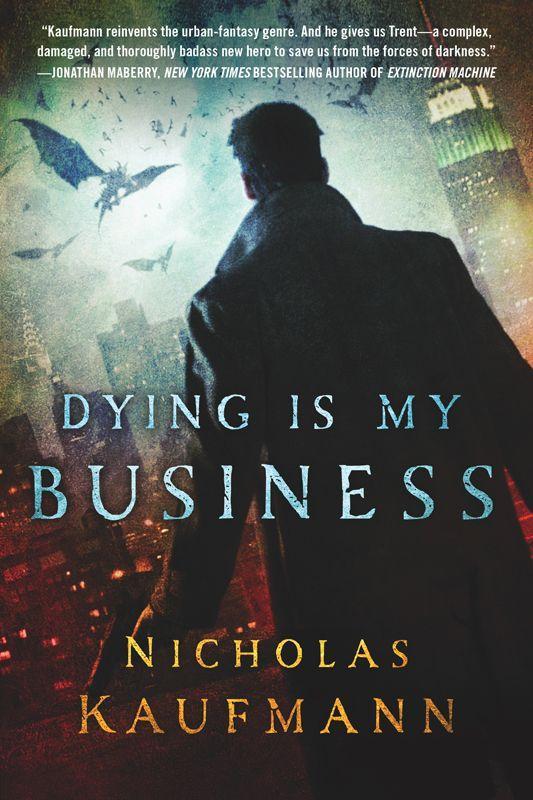 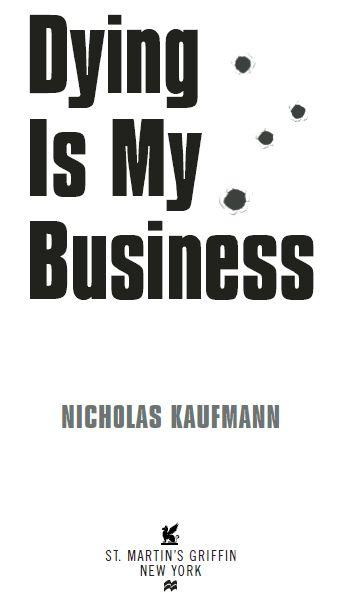 An enormous amount of thanks are due to Daniel Braum, M.M. De Voe, Ben Francisco, Sarah Langan, and David Wellington for their invaluable help. Many thanks as well to Richard Curtis and Michael Homler for making this happen. And, as always, to Mongo Bettina for lighting the way.

Out of the waters it rose at twilight; cold, proud, beautiful; an Eastern city of wonder whose brothers the mountains are. It was not like any city of earth, for above purple mists rose towers, spires and pyramids which one may only dream of in opiate lands beyond the Oxus.…

Ain’t found a way to kill me yet.

It’s not as easy as it looks to come back from the dead.

It’s a shock to the system, even more than dying is. The first new breath burns like fire. The first new heartbeat is like a sharp, urgent pain. Emerging from the darkness like that, the sudden light is blinding, confusing. Coming back from the dead feels less like a miracle than like waking up with the world’s most debilitating hangover.

When I gasped my way back to life that night, it took a moment for my eyes to adjust, and for the fuzzy, greenish smear in front of me to come into focus. When it did, I found myself staring into the grinning face of a dragon. It was fake, obviously. Even in my groggy, fresh from the dead state I was pretty sure there were no such things as dragons. The smiling, cartoonish head was attached to a green plastic body with a cracked wooden saddle on its back. Where its legs should have been was a big, rusted metal spring embedded in the dirt beneath it. A spring rider, I realized, the kind kids rode on in parks. Was that where I was? A park?

I lifted myself up onto my elbows and looked around, trying to remember where I was and why I’d come here. This wasn’t the first time I’d died—in fact, it was the ninth; I was keeping count—but that didn’t mean it had become any easier or less disorienting. It was night. The stars above were hidden by thick, smoggy clouds that turned the moon into a feebly glowing smudge. There were sodium streetlights nearby, close enough to light my surroundings in a sickly yellow pallor. I saw another spring rider behind the first, a unicorn this time, and in the distance a seesaw, a rusted merry-go-round, and a half-broken jungle gym.

A playground. What the hell was I doing in a playground?

Oh, crap. It all came back to me then. Bennett. I’d come here looking for a man named Bennett. I sucked in a deep breath, my lungs still aching. There was a small, ragged bullet hole in my shirt, right over my heart, rimmed with blood and gunpowder. I stuck my finger through it and touched the smooth, unbroken skin beneath. The bullet wound had already healed. There wasn’t even any blood, except for what was on my shirt and what had spattered in the dirt around me. The rest had been reabsorbed back into my body, neat and clean.

I was a freak, but at least I was a meticulous freak.

Groaning, I turned onto my side. Something small rolled off me, landing softly in the grass. I picked it up. It was a bullet.
The
bullet, in fact; the one that had killed me. My body had spat it out as it healed itself. I tossed it away. The bullet landed on a patch of bare dirt, rolled a few inches, and came to a rest against the worn leather shoe of a dead body that sat slumped at the base of the swing set.

I should have been surprised, but I wasn’t. I’d gotten used to seeing corpses when I came back from the dead. Way too used to it.

This one’s head drooped toward its shoulder, its jaw hanging slack. Its skin was as brown and paper-dry as a mummy’s, as if it’d been sitting there undiscovered for centuries, but the black silk shirt hanging off its withered frame and the cheap gold chain around its neck told a different story. He’d once been a beefy psychopath named Maddock, Bennett’s bodyguard. Now he was more like beef jerky, emaciated and dried out, as if he’d been dug out of an ancient pyramid in Egypt. Only he’d just died a few moments ago, and this wasn’t Egypt, this was Queens.

I got to my feet and stood over Maddock’s body. The son of a bitch hadn’t just shot me dead, he’d done it with my own damn gun. I pulled my chrome-plated Bersa semiautomatic handgun from his dead fingers. I glanced around the playground, looking for Bennett. I hoped I hadn’t lost him. For the past couple of months, ever since the little boy in the crack house died, I’d been off my game, like my heart just wasn’t in it anymore. I still did my job. I still broke into warehouses, vaults, and homes, and stole priceless objects for a low-level crime boss in Crown Heights named Underwood to sell on the black market, but I was losing my touch. After botching a recent job by setting off a silent alarm I should have known was there, I suspected Underwood was running out of patience with me. I’d heard enough agonized screams coming from behind his black door to know that an angry Underwood was a dangerous Underwood.

So when he asked me to bring Bennett in, I figured this was my chance to show him I could still pull my weight. My mistake was thinking the job would be an easy one. I thought I had the element of surprise on my side, but when I followed Bennett to the old, deserted playground in Queens, he was less than surprised. It was an ambush. The moment I passed through the gate, Maddock came out of the dark and wrestled the gun out of my hand.
Next time, Underwood should come for me himself, not send some halfwit errand boy,
Bennett had said, and then Maddock shot me with my own gun and I’d died for the ninth time.

The ninth that I knew about, anyway. It’s hard to be sure about these things when your memories don’t go back more than a year.

I hurried through the open playground gate and onto the sidewalk outside. Bennett couldn’t have gotten far yet. I never stayed dead for more than a couple of minutes. The brisk late-September night air nipped at me. This time of year in New York City, the days were still warm but the nights grew cold, as if winter were trying to sneak up while no one was looking. Bracing myself against the chill, I looked up and down the empty street, past the boarded-up windows of the vacant buildings to either side. I spotted Bennett in his blue pinstripe suit ducking around the corner, and sprinted after him. As I rounded the corner, he stopped next to a parked black Porsche and reached into his pocket for the keys.

He saw me. His eyes widened in surprise, and the color drained from his face. He looked like he’d seen a ghost. He pulled out a set of keys with his trembling hand, and fumbled in an attempt to press the unlock button on the key chain. Before he could try again, I tackled him to the sidewalk. The keys bounced out of his hand and slid under a nearby Dumpster.

I put one hand on his chest to hold him down, his heart jackhammering under my palm. I tucked my gun into the back of my pants and patted Bennett down. I found a small, snub-nosed revolver in a shoulder holster and tucked that into my pants, too. Bennett stared at the bullet hole in my shirt.

I retrieved a pair of plastic wrist ties from my pocket. I rolled Bennett onto his stomach and started binding his wrists together behind his back.

He didn’t put up a fight, only craned his neck around to stare at me with a combination of horror and awe. “How are you still alive?”

If he wanted an answer, he was asking the wrong guy. I didn’t know any more than he did. I pulled Bennett onto his feet and dragged him toward where I’d parked.

The night-black Ford Explorer was a gift from some rich businessman Underwood pulled a job for, back before my time. I didn’t know the details. Underwood said it was better that way. But the Explorer was perfect for collection jobs. It was big enough to be imposing, the kind of car you didn’t want to get in the way of, and had enough room in the back to hold whatever Underwood sent me to collect—computer equipment, works of art, briefcases full of money. Collector, I thought. It was a fancy name for a thief.

But this was the first time I’d ever been sent to collect a
person
. What was Underwood planning to do with Bennett once I brought him in? I thought of Underwood’s black door again and shuddered. I put it from my mind. I was hired muscle, paid to
do,
not think.

I took the BQE back to Brooklyn. The traffic wasn’t too bad this late at night. Bennett sat in the backseat with his hands tied behind his back. He stared out the window like he was trying to put two and two together but kept coming up with the wrong number. When I exited the expressway and steered the Explorer onto Flatbush Avenue, he finally found his tongue.

“Maddock,” he said. “I left him behind to dispose of your body. What happened to him?”

I glanced at him in the rearview mirror. “He’s dead.” I didn’t fill him in on the details, but it was the same every time, for all nine of my deaths. The thing inside me, whatever it was that brought me back time and again, did so by siphoning the life out of whoever was unfortunate enough to be closest to me. It was like there was only so much life to go around, and every new life it gave me had to be taken from someone else. I didn’t know why, but for some reason I wasn’t allowed to stay dead. Then again, after surviving nine different deaths, maybe it wasn’t smart to start looking a gift horse in the mouth.

Bennett was quiet a moment. “Maddock had a wife and kids.”

“Maybe he should have gone into a different line of work,” I said.

Bennett kept talking. “The girl’s going to grow up to be a real heartbreaker, but the boy?” He shook his head. “Dumb as a rock, just like his dad. Like his dad
was,
anyway. Before you killed him.”

Elena by Thomas H. Cook
The Unremarkable Heart by Slaughter, Karin
Stalked by Death (Touch of Death) by Hashway, Kelly
Shaking the Sugar Tree by Wilgus, Nick
204 Rosewood Lane by Debbie Macomber
Ellis Peters - George Felse 02 - Death and the Joyful Woman by Ellis Peters
The Mortifications by Derek Palacio
Brothers in Blue: The First Love Match by Concepcion, Jayna
Hit the Beach! by Harriet Castor
Uncovering You 3: Resistance by Scarlett Edwards
Our partner