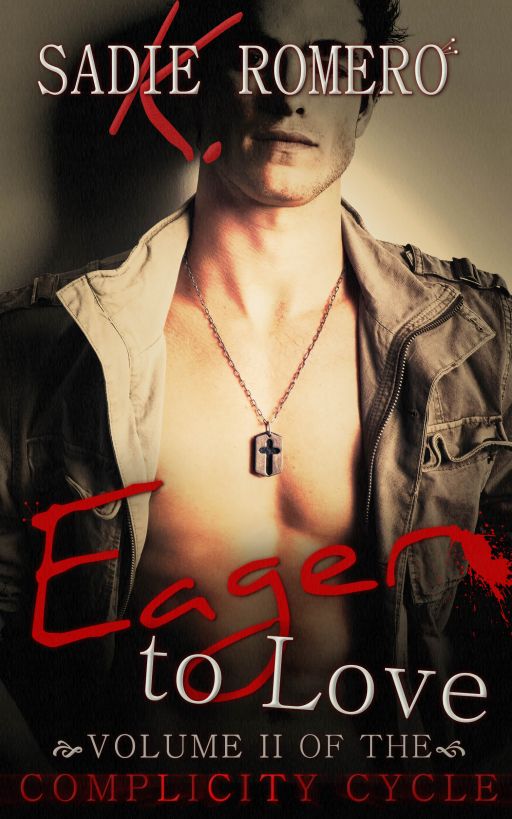 Volume Two of the Complicity Cycle

Published by Sadie Romero at Smashwords

All rights reserved. No part of this document
may be reproduced in any form without express, written consent from
the author.

A product of S.K.R. Publishing

Huey P. Long was a decaying shell of a
building situated right in the middle of Louisiana State
University’s campus like a dead tooth set in a jaw of
milk-fortified pearly whites. They’d built the place—a swimming
pool and rec center—back during the great depression, but they
boarded it up in the nineties and everyone somehow forgot about it.
It was never demolished, never repurposed. Now, weeds burst from
the concrete, blackened mold oozed from red rooftop shingles, and
algae crept up the pale sides of the outdoor swimming pool, which
stayed half-filled with stagnant rainwater. Like the secret Subway
under Foster Hall, most people didn’t even know Huey P. Long
existed.

“LSU,” Jeffery whispered, pulling back the
broken flap of chain-link, “has many secrets.”

“I see that,” I whispered back, crawling
through the fence. “My question is: how is it you seem to know so
many of them?”

Jeffery grinned, his teeth white by my
cellphone’s makeshift flashlight. “I know people.”

Jeff scrambled through the fence much more
gracefully than I had. “You would too,” he said, “if you’d get out
of the apartment once in a while, Introvert Lynn.”

“Yeah, only because exploring an abandoned
building in the middle of the night means we’re almost guaranteed
not to run into people.” He pulled out his own phone light and
shone it at a rusty ladder on the side of the building.

“Baby steps, Jeff,” I said. “Up to the roof?
I thought we were going inside.”

“You’ll see,” he said, taking to the ladder
first.

I followed, not minding the view. Jeffery had
a great ass, even in the dark.

At the top of the ladder, we climbed over an
ornate chest-high-wall and found ourselves on a second-story
open-air track that encircled the derelict pool like a second-story
theater balcony. It was very dark. The slimy water in the pool
below reflected moonlight wherever it wasn’t patched over with
matte films of algae, these darker spots looking like fissures to
some cold, black hell in which not even stars could shine.

Crickets and cicadas frazzled the night air
with their usual buzz, and the ever-present hum of Baton Rouge’s
traffic continued, but Huey P. Long worked a dulling effect on
these familiar noises. It was as if the building existed in a
bubble force-field from one of Jeffery’s science-fiction novels,
and sounds filtering through it became hollow echoes of their
former selves. Addition-like cross symbols dominated the
architecture and tile work, and the motif made the place feel even
more like a graveyard.

“‘What are the roots that clutch?’” Jeffery
whispered with drama, quoting something. “‘What branches grow out
of this stony rubbish? Son of man, you cannot say, or guess, for
you know only a heap of broken images.’”

I shoved him. “Stop it, Shakespeare. It’s
creepy enough.”

We walked the loop of the track by moonlight.
The rubbery polyurethane that had once coated the running surface
now existed in only a few stray stubbles, the rest pulled up and
hauled away to show naked concrete underneath. Our footsteps
sounded loud.

Eventually, Jeffery stopped us in front of a
series of black, rectangular pits over the edge of a low guardrail.
Thick, heavy walls barricaded the pits from each other, and when I
shone my light down into them, I saw strange markings and graffiti
over the walls and the floors.

“Are we going down into them?” I asked. My
stomach felt cold at the thought of it.

“Naturally,” said Jeffery. “That’s where all
the cool stuff is.” For a smile like that, I figured I could take
the risk.

Besides, there wasn’t
really
any
danger, right? We were in the middle of a college campus, for
crying out loud.

We walked down an old brick stairwell and
through doorways with only bare hinges to indicate that doors had
ever been there. Then we crossed into the dark cube of the
racquetball courts.

In the first two rooms, my phone illuminated
graffiti of all the usual sorts—unreadable handles and crudely
drawn boobs—but the markings in the third were a more serious sort.
They seemed more deliberate and careful. Most prominent among these
was an ornate, cross-like symbol spray-painted with stencils on the
floor: 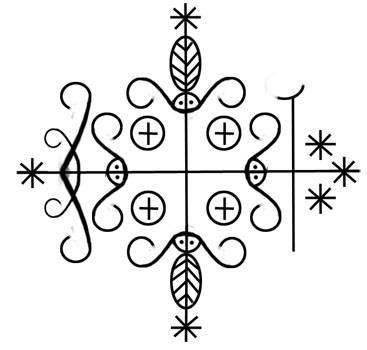 The design lay easily eight feet in diameter,
and it aligned with the four cardinal directions. Scrawled in chalk
above the northern point were the words: “
Damballa of the
Earth
.” East had “
Loko Ati Sou of the Wind
.” West:
“
Agwe of Ocean
.” And to the south: “
Ogou of the Flame and
Forge
.”

Melted candles littered the ground here and
there, as did white feathers and a grainy substance that looked
like cornmeal. Instead of stock graffiti, the walls had even
stranger words and images spray painted on them.

“
Open the gate for me
” above a skull
with flaming eyes.

“
Come and accept these offerings
.”

And large against the back wall: “
LSU is
LSU
.”

“Jesus,” I said. “This got genuinely creepy
all of the sudden.”

I noted that this court still had a door,
although it was swung open. This room had clearly been used for
some kind of ritual, and I wondered if they normally kept the door
closed to keep out the run-of-the-mill vandals. “What is this?” I
asked. “Like satanic stuff?”

“Not even close,” Jeffery said. “Voodoo.
Which is actually closer to Catholicism than Satanism, if memory
serves.”

Jeffery nodded. “Voodoo is, like, a
conflation of Christianity and Haitian paganism.”

I walked around the edge of the cross on the
floor. I didn’t believe in any kind of
magic
nonsense, but
nevertheless, something in my stomach kept me from stepping on the
symbol. I looked at the back wall and read, “
LSU is LSU
,”
again.

“I’ve been researching local voodoo stuff
ever since I found this,” Jeffery said. “Apparently there’s a
pretty active local community. There’s even, like, a voodoo club on
campus, but the university refuses to acknowledge it.”

“So this is probably their handiwork,” I
said.

“I think so,” said Jeffery.

He kissed my neck, and I jumped. He chuckled
against my skin and wrapped his arms around me. “Come on,” he said.
“It’s not real. This is just paint and chalk on concrete.”

“And candles and feathers,” I said. “It’s
spooky.”

He kissed me, and I pushed him back
lightly.

“Why not?” he whispered. His hand found skin
under the back of my shirt, and his fingertips moved up my
spine.

“Jesus Christ, Jeffery. Have you never seen a
horror movie?”

“If we start making out in here, we’re
statistically guaranteed to get axe murdered.”

“I think voodoo priests use ceremonial
machetes for their human sacrifices,” he said, kissing me again.
“Not axes.”

“Oh, well in that case,” I said. “Seriously.
That line is your panty-dropper?”

Something had clattered outside the
racquetball court. The sharp
clack
of rusted metal against
concrete, then a long squeal and the jingle of a dangling
chain.

My heart practically stopped, and every
muscle in my body locked up. Jeffery picked me up completely and
pressed me against the door-side wall just in time for the white
beam of a flashlight to cut through the doorway. It swept across
the floor markings and the “
LSU is LSU
” graffiti at the back
of the court.

Jeffery pressed a finger to my lips, his body
protectively caging me against the cool wall. I could hear my heart
thudding in my ears so loudly that I felt sure whoever was holding
that flashlight could hear it too.

“Well, someone’s been in here recently,” said
a voice, female and authoritative. “The room to the creepy-ass
court is open.”

“Fucking kids,” said another voice, male and
further away.

Footsteps grew louder, and the light grew in
intensity.

Every week in the school newspaper, they ran
stories about crimes students had committed that week. So-and-so
tried to steal $700 worth of merchandise from the Union bookstore
or got drunk in public or cow-tipped a whole row of motorcycles or
whatever. The year before, I saw an article about six students
breaking into Tiger Stadium and getting suspended for a
semester.

It was funny how quickly my concern swapped
from “fearing for my life” to “oh no, my grades,” as soon as it was
established that no machete-wielding cultists were lurking in Huey
P. Long (at that moment, anyway).

Still, I had loans and a career to think
about, so I was probably almost as desperate not to get caught as I
was to not get murdered.

Jeffery glanced at the ledge overhead, the
one we had peered down from when we stood on the second-story
track. He bit his lip.

I knew he had just as much at stake as me—if
not more, him being a double-major honors student on the dean’s
list. God knew how many clubs he could get kicked out of for going
on academic probation.

He eyed the ledge carefully, then he put his
back to the wall, squared his feet, and interlaced his fingers. He
was going to boost me up.

A knot caught in my throat.

“What about you?” I whispered.

“I’ll figure something out,” he said. “Just
go. Get all the way out the way we came.”

I put my foot in his hands and placed my
hands on his shoulders to steady myself. Then he raised me up. I
could just barely touch the ledge.