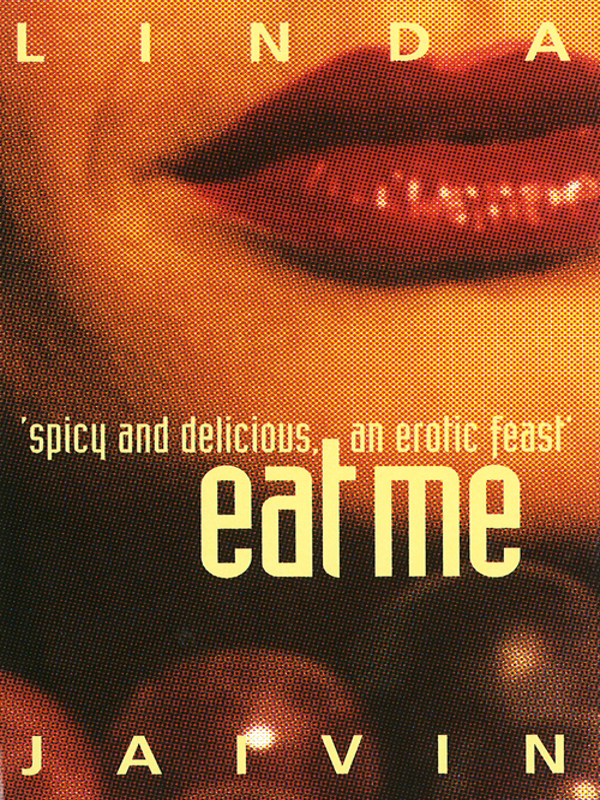 Praise for
Eat Me

âYou'll enjoy this tasty rompâyou'd better, you slaveâ and will thank Jaivin for the exquisite pleasure.'
Paper
magazine, USA

âErotic escapism at its best, with a touch of humour and a touch of class; a blend of fetishism, fun and kiwi fruit!'
New Woman

âThe true strength of this bookâ¦is Jaivin's merciless wit and her ear for dialogueâ¦She's bitchy, wicked and intelligent. She has firm control over her material and a talent for slicing through the pretension with the precision of a sushi knife.' Matthew Condon,
Weekend Australian

âLinda Jaivin is a writer of some discipline but minimal bondage. In other words, she wants it both waysâserious and funny. And who could blame her? She can do it both ways.'
Canberra Times

âJaivin never loses sight of her self-declared goal, which is to wrench the writing of erotica from its male practitioners, dress it up with style and sly humour and restore it to women.' Jonathan Kirsch,
LA Times

â
Eat Me
is the sexiest thing to come out of Australia since Mel Gibsonâ¦This book does for sex whatâ¦
Absolutely Fabulous
did for fashion: it takes a subject we're all passionate about and makes wickedly clever fun of it.'
Glamour
, USA

âSome of the scenes described actually turned me on.'
Times Literary Supplement

Linda Jaivin is a writer and translator.
She lives in Sydney.

Confessions of an S&M Virgin

The Monkey and the Dragon

The author wishes to thank Michael Heyward for being a dream editor and everyone else at Text Publishing for their enthusiasm and encouragement. Portions of this book first appeared in a different form in
Australian Women's Forum
. The author is grateful to the editor of that magazine and also to Michael, Phil and Jonathan of the Gadflys for permission to reproduce their lyrics.

All the characters in this novel are fictional. Any resemblance to real people, living or dead, is unintended.

This project has been assisted by the Commonwealth Government through the Australia Council, its arts funding and advisory body.

THE ROAD TO GUNDAGAI

She
ran her fingers over the fresh figs. Surprising little sacs they were. Funny, dark and wrinkled, yet so exquisite on the tongue. Mother Nature had surely been thinking of Father Nature when she invented figs.

Ava looked up, tossing back her long black hair and glancing around with ice-blue eyes. It seemed she had the whole supermarket to herself. Sarah, the one cashier on late-night duty, had just checked out the only other customer and was absorbed once more in her Mills and Boon. All that could be heard was the hum of the refrigerator cabinets and the uninvasive beat of the muzak. The artificial chill of the heavy-duty airconditioning took the edge off what might otherwise have been an almost unbearably lusty cornucopia of smells, from the sweet ripeness of the bananas to the citron pungency of the lemons and limes. Everything was cold in supermarketsâ the shiny mop-polished floors, the gelid steel of the shelves, the polar fluorescence of the lighting.

Ava picked up a fig from the pile and sniffed it. She stuck out her tongue and licked it. If milk is for pussies, why not figs? Slowly, she hiked her short black skirt up above the lace tops of her stockings. She wore no underwear. She never wore underwear. What was the point? She touched herself, and found that she was warm and wet. With her other hand, she brought the fig down between her legs. She teased the mouth of her cunt with it, gently at first and then with vigour. She could feel the skin of the fig burst. Some of the sticky seed spilt out, adhering to the lips of her cunt and the secret places on the inside of her thighs. She put the fig back in her mouth. Salty sweet. She sucked it dry.

Ava dropped the spent fruit back onto the shelf, and advanced upon the strawberries. Large, red and firm, they knew exactly where they belonged. High inside her. She took a few tight steps, placing one stilettoed foot in front of the other, concentrating on the sensation the strawberries created as they slipped and crushed against each other. She thought she could distinguish each ticklish green stem. Then she stopped, leaned back against the shelves, closed her eyes and pulped.

Adam, the store detective, swallowed hard. He tried to get a better view of Ava from behind the piled bags of crisps where he'd concealed himself. The lump in his throat travelled down his thick neck and into the top of his tightly buttoned shirt. He had been standing there, behind the snack foods, when she strode into the fruit and veg section. He'd seen everything. He knew he ought to have apprehended her when she performed that act with the fig, but he found himself paralysed withâ¦what? A shudder went through him now. He hitched up his khaki trousers and ran an awkward hand over his crewcut. His movements were clumsy. A shiny packet of low-cholesterol, all-natural blue corn chips crunched to the floor with a clamour that made his heart skip a beat.

If Ava noticed, she didn't let on. Her expression hadn't changed. It was rapturous. She hitched her skirt higher, up above her suspender belt. Thrusting two fingers deep into her own, soft fruit, she plumped and prodded, soaking them in juices fresh and tangy. She pulled them out slowly, and placed them in her mouth, sucking on them between pursed lips. A dollop of strawberry-coloured cream adhered to her chin. She fished in her purse for her pocket mirror. Bending down, with her arse pointed in Adam's direction, she held the mirror between her legs and, parting her labia with her fingers, studied herself with intense concentration.

Grapes. This was the thought that struck Ava now.

She selected carefully. Firm fruit in a tight bunch. Large round purple ones. She turned around so that she was facing, once again, in Adam's direction, and leaned back on the shelf. Opening her legs wide, tracing little noughts on her clitoris with one hand, she pushed the grapes up herself with the other, a little at a time, pulling back a bit before each new thrust. The stems scratched and tickled, and she liked that.

Without warning, Ava lifted her head to look straight into the eyes of the man who'd been spying on her all this time. A smile played on her blood-red lips. Of course she knew he was there. Smirking, she extracted a single, dripping grape and offered it to him. Adam stood frozen as a TV dinner. She shrugged. Puckering her lips, she ingested the grape with a great slurping sound and put the rest of the bunch back on the shelf. Never once releasing his gaze from hers, she felt around behind her until she located a ripe kiwifruit. She held it up in front of her face, still looking hard into his eyes, and dug her fingernails into the gooseberry flesh, rupturing the skin. Green liquid ran down her fingers. Her eyes bored into his. She inserted the ragged fruit into the still-hungry maw between her legs, now running with juices of every description.

Adam took a single, tremulous step in her direction. She pretended not to notice. Calmly, she extricated the kiwifruit and proceeded to eat half. Ava held out the other half to the detective and arched an eyebrow. He was striding towards her now. Taking the fruit. Eating with rapture. Dropping to his knees in front of her.

She widened her stance. In one swift movement, she reached out and, grabbing him by the back of his head, brought his mouth up to her cunt. He gasped.

âEat me, you filthy spud,' she repeated, threateningly this time.

Ava fumbled in her bag with her free hand until she found her whip. The compact one she always kept in her purse. She cracked it against the floor next to Adam.

He shook his head, but his thick short hair only excited her as it brushed back and forth against her sensitive and swollen sex. The stubble on his chin grated engagingly on her inner thighs.

âEat me, you coffee stain. You slice of mouldy cheese. You slab of five-day-old horsemeat,' she taunted, teasing the back of his neck with the handle of the whip.

âNot true!' he gasped, clutching onto her legs with both hands. âI'm as unsullied as Sara Lee, as pure as buckwheat pasta. I won'tâ
ouch!â
participate in your disgusting little game.' She tugged his ear, hard. He whimpered and stopped his struggle.

Cold Midnight by Joyce Lamb
The Circle of the Gods by Victor Canning
News of the Spirit by Lee Smith
Blood Type by Garrett, Melissa Luznicky
Voice Over by Celine Curiol
Taken by Midnight by Lara Adrian
(Once) Again by Theresa Paolo
Texas Redeemed by Isla Bennet
Roaring Dawn: Macey Book 3 (The Gardella Vampire Hunters 10) by Colleen Gleason
The Guardian by Beverly Lewis
Our partner