Read Echoes from the Lost Ones Online

Echoes from the Lost Ones 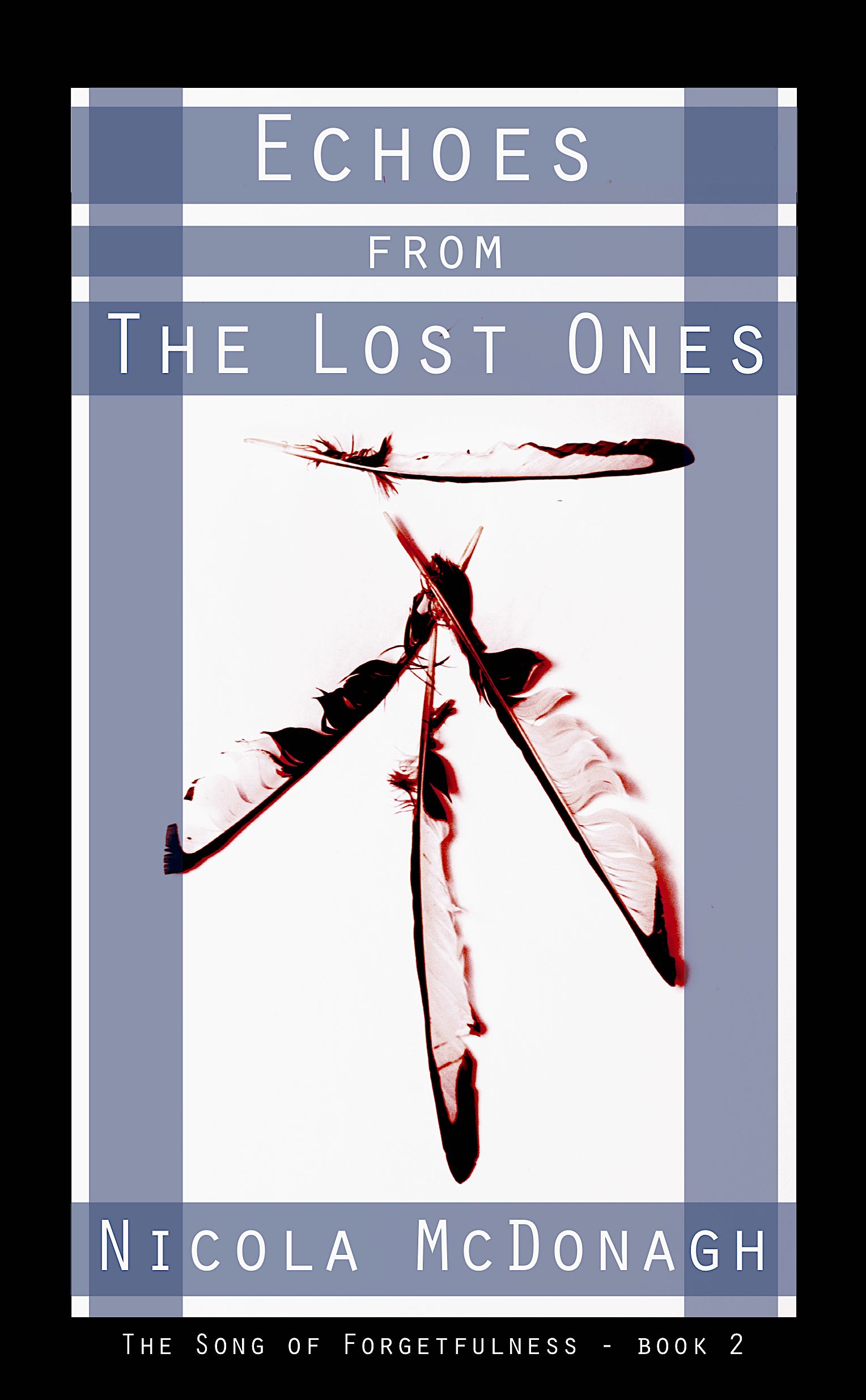 Chapter One Kyboshed in the underbrush

Chapter Four The Day of Getting Even

Chapter Seven Deeper into the Forest

Chapter Eight All Cosy in the Wenchstead

Chapter Nine The Chatter of Chickles

Chapter Twelve A Strange Encounter In The Beyondness

Chapter Seventeen The Monastery in the Clouds

Chapter Eighteen Food Of The Gods

Chapter twenty-two Know Who Your Friends Are

Chapter Twenty-Three A Letting Go of All Things Learned

Chapter Twenty-Four The Book of Revelations

The Song of Forgetfulness

Books in
The Song of Forgetfulness
series 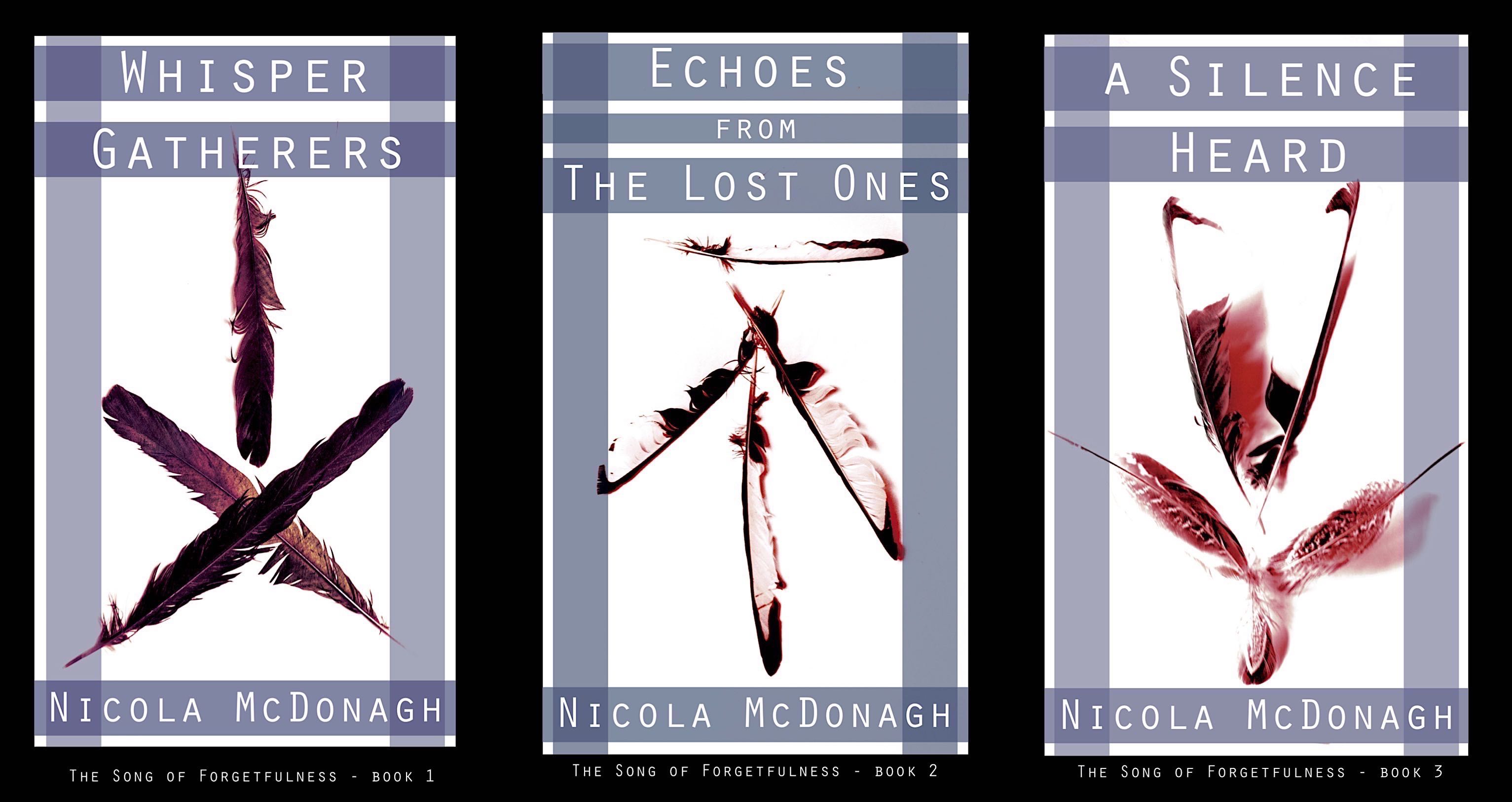 This book is a work of fiction. Names, characters, places and events portrayed are either products of the author's imagination or are used fictitiously. Any character resemblance to actual persons living or dead is entirely co-incidental.

No part of this work may be reproduced or transmitted in any form or by any means, electronic or mechanical without written permission from the author.

To Martin for all his help, encouragement and hard work on the website and cover design.

To Sasha and Sarah for giving me the idea.

Kyboshed in the Underbrush

Something tiptoed down my back. I clenched my teeth so as not to yell “Yak” and continued to crawl. My hands touched squish and prickle, bugs swarmed around my fingers and neck. Huffin’ hell and back, I was being chomped by all things natural and I wasn’t even a gnat’s breath away from the perimeter fence. I knew nowt about the Wilderness, except it was full to brimming with beasties that craved my flesh.

When far enough away so as to be no more than a speck in the distance, I stood and shoulder wriggled until whatever trickled through my flesh hairs fell off. I looked to the sky and with the sun on my right, headed north into the thick herbage.

The shrubbery gave way to towering trees crammed so tight that after a few steps I was surrounded by dark. Slim streaks of light slashed through the branches and I was able to see enough so as not to trip over the massive gnarled roots that spread across the ground like giant oldie fingers. I took in a breath of leaf rot and made my way all hush-hush through the forest, ears wide open for sounds of danger.

A snap to my left caused me to stop ’bruptly. I turned my head in the direction of said noise. All quiet. I was skittish to be sure not knowing if Wolfie or Agro were on my trail. Another crick-crack, but from the right. I waited for a sec, and then darted into the most densely packed part of the wood. The sound did not follow.

My lower bits began to pulse. Santy Breanna told me once that pain was merely a mind jest and if I forced my will to block it out, then it would cease. So I focused on my purpose; to find my bro-bro, and hoped that she was right.

My thoughts turned to the soothers in my backpack, so I peered into the gloom in search of somewhere to rest. An unruly hairshambles of a plant high enough for me to squat behind became my hideout whilst I rummaged through my Synthbag and took out a bar of Sterichoc and a killpainpill.

Crouched and aching in the prickly vegetation, I swallowed down the tab, scoffed the confec and waited for the goodliness to take effect. I shuffled position and wedged myself deeper into the fronds. It was a robust shrub and I quite believed that I was safe, until the ground began to tremble. I looked through the leaves and saw a whole flock of legs of the male kind, coming my way.

A calloused hand grabbed onto my wrist and hauled me into the feeble light. His grip was strong but not as much as the pong that drifted from the cluster of raggedy youths that I was surrounded by. I turned my head upwind and pulled myself free of the dirt-faced juve. He jumped in front of me, eyeballed my choc, then tried to snatch it from my hand.

I punched him in the face and he staggered back.

No one takes my sweetie things, no one. Especially when I’m going through the redinesss. I figured that was what attracted them to me. Santy said that they sniff us out like Wolfies. Can’t help themselves, living apart from women-folk the way they do.

The teen bared his teeth, made a back-throat snarl and lunged. I sidestepped and he stumbled into the trunk of a tree.

Whilst he was occupied with rubbing his injured snout, I sidled away ready to run. But fingers unknown grabbed my hair and pulled. I reached behind and dug my nails into skin. They yelped and let go. I fell to my knees and scrabbled back to the bush to retrieve my Synthbag.

I thrust my fingers into the shrub and felt around until I touched something non-organic, slipped my hand into the strap and dragged it out. But before I could put it back on, the slit-eyed, teeth-bearing teenmales encircled me.

Some hiss-whistled through half opened mouths. Some cracked their knuckles. Some licked their wet lips and all gave off a sickly urge-filled stink. I turned and turned, looking for a gap in the wall of teen, but they packed tighter together.

I noticed them give each other a sly droop-eyed look, nod their heads, then slow step towards me. I thought my chest would explode so fast and hard did my heart thud against my ribcage. The juves crept closer. With nowhere to run, I raised my fists ready to slug it out.

I heard the thump, thump of feet on dry leaves and the not-yet ‘dults stiffened. Two mud-caked hands pushed through the barricade and a thick-waisted male stepped forward. He released a loud, wet snort, and they backed off, breaking the circle.

It was a good job the ‘dult turned up when he did or I’d be but floor pelt for sure. Those teens looked pretty fierce all right, with soil splattered on their cheeks, necks and foreheads; their eyes staring wild and full of threat. Bits of greenery and twigs stuck out from their matted hair and if I didn’t know better, I would think them part tree so much of the forest clung to their bods. Even me, the Roughhouse Champ, would be no match against all of them.

I’m tough but not stupid.

I recognised the one who tried to pinch my choc. He stood opposite me clenching and unclenching his fists. I saw his knuckles turn white each time his fingers bent, and when I caught his eye, he glared back. The others thrust their shoulders forward ready to pounce. I squatted all quick, arms around my head to shield me from a full on attack.

“Pull back ye bulls. Abide by the guidelines,” the ‘dult said and fanned them away with an air swipe. He turned and gestured for me to stand. I did. He walked over, folded his arms and moved his gaze up and down my bod. “Ye, ye are not one of us.”

I slowed my breath so as to appear all-calm like, and answered in a voice without quiver. “Well, nah. Visibly so,” I said, and then brushed some dirt from my pantaloons.

“Not suited for this rugged terrain.”

“That I am discovering with every shoe weary step.”

“And yer eyes are of that peculiar blue that only the softies have.”

“Perhaps not, but ye resemble them in pale of skin and light of hair.”

The not-so-big ‘dult, for he was no more than a finger joint taller than myself, scratched underneath the filthy pouch that hung around his pleated skirt and said,

I had hoped to end this chittle-chat without resort to mention of my moniker.

“Relinquish yer name or I will let the Nearlys have their frolic.”

“Let them try,” I said and put up my fists again.

“Wirt, what is she called?”

A flimsy looking youth with long straggly brown hair approached and looked between him and me. Then he stared into my eyes, blinked twice and backed away.

“Adara,” he said, and hung his head as if in shame.

“So that’s who yer are girlie?”

“That I can see,” he said and stared straight at my bosoomies. “A mistake I’ll not make twice.”

“Aiken, and do not forget it.”

“Not likely just yet, since we are surrounded by your namesake,” I said and pointed at the huge oak trees that loomed above our heads.

“Adara. That means catcher of birds. Ye will be of use. Ye will enter our domain and deliver yer potential.”

That’s why I hate saying my name. Every huffin’ time they come out with the same thing, like I’m this mythical girlygig who goes around grabbing birds out of the sky so they can eat meat. I AM NOT! It’s just a name. A name that well suits me I grant you. Nonetheless, I avoid the broadcasting of it to one and all, save this kind of thing occurs. Tried to give a false one to the Flashlighters once, but they had a Namer there like this Wirt and I had to run quick-quick to avoid being nabbed.

“It’s been more than a while since any of us tasted of the beastie. These teens never, not in all their short lives. Ay, ye will be welcome, most rightly. Adara, Auger. Adara, Bringer. Adara, catcher of…”

“Birds, yes I know and I’d be thankful if you could refrain from repeating both my name and its meaning.”

“Ye should be proud. Ye have a gift.”

“And a curse. Everyone who finds out wants a piece of me.”

“Fret not. We only want yer voice, lassie. Give that to us without fuss and ye will keep the rest intact. So, now ye will come with us and do our bidding.”

I did not respond. Best not to. Best to let them presume I will abide by their request with my silence. Although an interruption such as this could scupper my mission, there was a chance that the Agro or whatever it was that pursued me would lose the scent.

“Show the Bringer to our home, laddies. And do not peek at her best bits or ye’ll be munching on moss for a month.”

Pulling my arm away from a particularly low-browed bull, I bent down and hitched my Synthbag up over my shoulder before it was noticed. Once in its proper place and invisible again, it discreetly melded into my back leaving my hands free, in case I needed to use them.

Santy Breanna was not eager for me to travel on my lonesome, but to whom could I turn? She was broken-boned from the latest skirmish with the Agros when they came to free the Praisebee’s and snatch my bro. Plus, there are no shifty pathfinders in Cityplace.

Nah, I am best alone. I creep and peep more wisely without the hindrance of a low-grade scout, despite this wooded area being an alien topography. Oh, I stared at the downloadliness of the place on Orva’s comp, but that was all 2-D’s. This, this was most severely 3-DD!