Echoes of the Fourth Magic 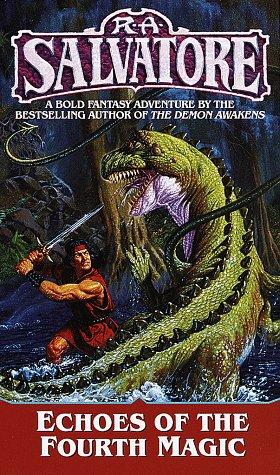 Del Rey is a registered trademark and the Del Rey colophon is a trademark of Random House, Inc.

To the memory of Geno Salvatore, my dad,
and to my wife, Diane.

Their inspiration and unconditional support
made all of this possible.

Visit
www.delreybooks.com
—
the portal to all the
information and resources
available from Del Rey Online.

• Sign up for the Del Rey Internet Newsletter (DRIN), a free monthly publication e-mailed to subscribers, featuring descriptions of new and upcoming books, essays and interviews with authors and editors, announcements and news, special promotional offers, signing/convention calendar for our authors and editors, and much more.

To subscribe to the DRIN: send a blank e-mail to
[email protected]
or you can sign up at
www.delreybooks.com

Questions? E-mail us at
[email protected]

There are so many people I wish to thank, too many to list here, for their help and support over the course of this project. My special thanks to Dave, Jean, Kent and Sheila for lending me the benefit of their experience and expertise in those areas in which I needed help the most.

Chapter 1. The Passage of the
Unicorn
Chapter 2. Riddles Beyond the Blackness
Chapter 3. To the Tick of a Different Clock
Chapter 4. Eulogy
Chapter 5. The Wrath of an Angry God
Chapter 6. Ynis Aielle
Chapter 7. In the Halls of the Colonnae
Chapter 8. The Desolation of Thalasi
Chapter 9. Blackemara
Chapter 10. Belexus
Chapter 11. The Emerald Room
Chapter 12. The Witch of the Wood
Chapter 13. City on the Mountain
Chapter 14. Ardaz
Chapter 15. Luminas ey-n’abraieken
Chapter 16. Patience
Chapter 17. Clas Braiyelle
Chapter 18. Caer Tuatha
Chapter 19. Shadows of the Throne
Chapter 20. Treachery Unmasked
Chapter 21. The Lines Are Drawn
Chapter 22. Under a Starry Sky
Chapter 23. The Wizard Unveiled
Chapter 24. Jericho
Chapter 25. To the Victor
Chapter 26. The Challenge

A Note on Language

J
EFF
D
EL
G
IUDICE AWOKE
in the stillness of night; perhaps it was the absence of sound itself that had stirred him from his peaceful slumber. For this enchanted valley, Illuma Vale, home of the elves of Ynis Aielle, was rarely silent, full of song and the music of nature: the wind blowing down off the Great Crystal Mountains, singing through the trees and tree houses; the dance of a mountain stream, leaping stones and calling its partings as it flowed through the vale.

Del slipped out of his bed and moved to the window. A quiet blanket of snow lay deep all about Illuma Vale, though the winter season neared its end. Even from this vantage point, in the dim light of night, Del could feel the enchantment of the place, the magic of the elves, and though he was troubled, that magic did find a tiny corner of his heart, bringing some measure of comfort and warmth.

He knew that he would not be able to find sleep again this night. Every night he awoke, or couldn’t get to sleep at all, his anxiety building as winter’s grip lessened. Soon the mountain trails would be open again, back to Avalon.

How many months had it been since he had walked the wondrous paths of that blessed forest? Since he had heard the song of the Emerald Witch, the mysteries of the melody
sweeping through him like the veils of a gossamer gown? After the Battle of Mountaingate, the worst day of Jeffrey DelGiudice’s life, he had tried vainly to find his way back into the enchanted forest, even going so far as to travel around the Southern Crystal Mountains to seek a different route.

But Brielle, with her confusing magic, had shut him out.

Del had sought out the rangers, pleading with them to guide him into the wood. But, alas, they had no answers for him.

Summer turned to autumn, autumn to winter. And the snows had forced Del from Mountaingate, back to Illuma Vale, and had then shut the trails behind him.

Still, Del should have enjoyed these times. The scars of the battle were fading and the elves had returned to their dance and merriment. The harsh winter could not daunt their eternal play, and now, with the season turning again and the coronation of the new King of Pallendara fast approaching, their joy seemed tenfold.

But an awkward perception, the feeling that he was trapped in a land where he did not belong, had grown like a cancer within Del. He could not escape the fact that he was from a different world, a long lost world, one of ambition and responsibility, and though he had always rebelled against those aspects of his society, the tendencies of his former life were painted indelibly on his mind. For all that he might agree with them in principle, the trivial frolicking of the elves did not satisfy his needs.

And his restlessness, he feared, might bring his dangerous knowledge crashing down on this innocent world.

His depression had only deepened with the wintry season. A beard now adorned his face; he wouldn’t be bothered with shaving, and he rarely left his room, for interaction with the elves only reminded him that he was not of this place called Aielle, was not, for all his desires, kindred spirit to the new world he and his companions had found on their emergence from the sea.

He dressed and moved to Billy Shank’s room and could not help but smile at the contented snores of his friend. Billy had grown to be at home here. His friendship with the daughter of the lord of the elven people had blossomed into something more, something wonderful.

Del thought of the upcoming coronation in the southland, and of the bond that would strengthen between the races, human and elf, and he smiled again. He and his companions had found this new world in turmoil, and despite all, had indeed done some good. “Bear witness for me,” he whispered into Billy’s ear, and he left the grand house.

Bordering on desperation, he made his careful way up the invisible stair to Brisen-ballas, seeking Ardaz, the one man who might understand his troubles.

But the wizard was nowhere to be found.

So Del wandered under the crisp, star-bright skies of winter’s last night. He could not deny the truth of his fears and his feelings, yet he could not escape who he was, the conditioning implanted upon his heart and soul by the years of growing up in a far different world.

He thought back across those centuries as he drifted aimlessly about the elven valley, considered again the amazing course that had brought him to this special place, a winding path that had traded technology for magic, pragmatism for mysticism, humanism for spirituality.

What a wonderful journey indeed! Del only wished that it had led him to a better place within himself …

The Passage of the
Unicorn

T
HE
U
NICORN
RAN
deep, ran smooth, gliding with the ease of an eagle on wing. But no hunter this; she was a ship of peace, the pride of the National Undersea Exploration Team, NUSET, pelagic counterpart of NASA, and the one, soon after the turn of the second millennium, to garner more of the government funding. The disaster at the space station, with seven astronauts dead, a shuttle and the multi-billion dollar station lost, had curtailed NASA’s budget tremendously and dampened the nation’s taste for space exploration.

But scientists had found it easier to sell the public on exploration of the seas, the last great unexplored expanse on the planet. Particularly after yet another disastrous El Niño year, with the warm Pacific water brewing a long series of disastrous storms sweeping across the continental United States; public opinion rang out favorably for the fledgling NUSET.

And the
Unicorn
was the result. Every member of NUSET looked upon her with satisfaction and deep respect, for this submarine was the epitome of technological achievement. More than that, in accordance with the legend of her mythical namesake, the
Unicorn
had become a symbol of hope for the future of mankind amidst the constant threat of technological annihilation. For NUSET was an organization
openly and honestly dedicated to the peaceful application of science. Any nation, friend or foe, could, for a modest fee, sign on to share in the wealth of information the project meant to collect. Any nation. And that, more than anything else, was the true victory of the
Unicorn
.

More than five miles of water now separated this splendid example of the new generation of submarine from the sunlit surface. All was dark here and quiet, save the gentle hum of the ship’s engines and the
ping-poc
of the hull-insulator hydraulic system beating back the tremendous ocean pressure. Powerful searchlights cut a swath of illumination through the lightless waters as this lone sphere of civilization prowled the Atlantic’s depths.

On the surface she had bobbed nervously about, each swell threatening to spin her over, but in this watery environ, she swam swiftly and effortlessly. Here she was made to be at home, graceful and swift, and yet for all of her detailed and near-perfect designs, here she remained a stranger.

Morning sparkled in bright reflections on the glassy surface, but this depth knew only night. So began the
Unicorn’s
thirty-second day out of Woods Hole, her first without a dawn. Down she had gone. Down from the curious Russian trawler; from the humming propellor of a private plane—suspected of being a spy plane out from Cuba; from the beating of the Navy helicopter’s gigantic blades. Down from the clamor of a mechanical world, deeper than any hint of the sun could reach, deeper even than the fish dared swim.

Nightmare Kingdom: A Romance of the Future by Barbara Bartholomew
Assignment - Budapest by Edward S. Aarons
The Invisibles by Cecilia Galante
The Pretender by Jaclyn Reding
Nothing Left To Want by Kathleen McKenna
False Pretenses by Cara Bristol
Firehurler (Twinborn Trilogy) by Morin, J.S.
The Salzburg Tales by Christina Stead
Victoria Victorious: The Story of Queen Victoria by Jean Plaidy
Sunset at Sheba by John Harris
Our partner