Read Edna in the Desert Online

Edna in the Desert 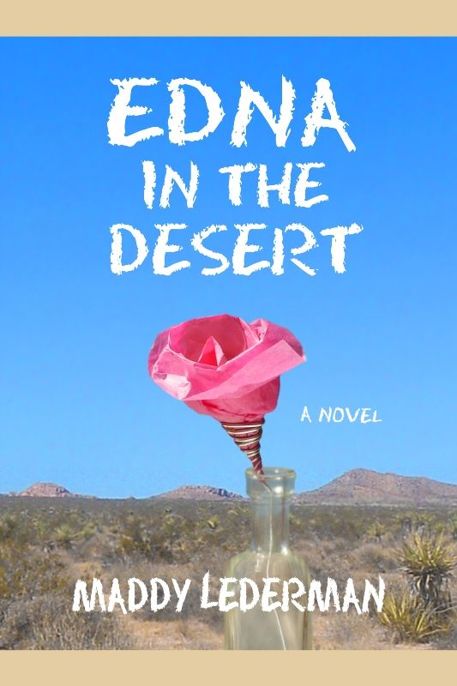 4 DYING IN THE DESERT

8 THE LIFE THAT GRANDMA AND GRANDPA LED

17 THE BREEZY PERSONALITY AND THE DIRT

Edna in the Desert

The author is hereby established as the sole holder of the copyright. Either the publisher (eLectio Publishing) or author may enforce copyrights to the fullest extent.

This eBook is licensed for your personal enjoyment only. This eBook may not be resold, reproduced or transmitted by any means in any form or given away to other people without specific permission from the author and/or publisher. If you would like to share this book with another person, please purchase an additional copy for each person you share it with. If you are reading this book and did not purchase it, or it was not purchased for your use only, please return it to your eBook retailer and purchase your own copy. Thank you for respecting the hard work of this author.

eLectio Publishing wishes to thank the following people who helped make these publications possible through their generous contributions:

Other titles from eLectio Publishing:

Tales of the Taylor: Songs that Changed
the World by Ethan D. Bryan

Learning to Give in a Getting World
by Marcus R. Farnell, Jr. and Jesse S. Greever

At the Back of His Mind
by T. Marcus Christian

The Wall & Beyond
by Joanna Kurowska

The Advent of the Messiah: Finding Peace, Love, Joy, and Hope in a Modern World
by Tony Turner

More from Life: 99 Truths to Understand and Live By
by Christopher C. Dixon

Living to Give in a Getting World
by Marcus R. Farnell, Jr. and Jesse S. Greever

The Sons of Hull: Book One of the Advocate Trilogy
by Lindsey Scholl

Absolute Positivity: An Inspirational Story of Positivity, Prayer, and People
by Karl B. Sanger

Striking Out ALS: A Hero’s Tale
by Ethan D. Bryan

Obsidian: Book Two of the Advocate Trilogy
by Lindsey Scholl

Legends of Luternia: The Prince Decides
by Thomas Sabel

Proof of Divine: One Man’s Journey from Doubt to Faith, Hope, and Love
by Andrew Murtagh

Packer and Jack
by Rachel Hoffman

Hues of Darkness, Hues of Light
by Patrice M. Wilson

Under the Influence
by Phil Hamman

To Eve and Evelyn, and the Mojave

The sun baked Edna’s forehead and brought her slight queasiness to a more threatening nausea. She tossed over. Changing positions sometimes helped, but pistachios and beef jerky on top of ice cream and the long ride did her in. Or was it what she’d just heard? She didn’t remember asking to pull off, only hunching over next to the family’s newest, silver Audi. It rocked softly as Brandon bounced around the back. The motion made her sicker, but Edna tried to stay near the car in its little strip of shade. At eleven in the morning, the sun was already relentless.

“Are you OK, honey?” Edna’s mother called from inside.

“What does it look like? Can Brandon stop that?”

The little boy looked out the window at his sister, crouched on the ground and heaving. Edna’s father stepped out of the car, saw there was nothing he could do, and stepped back in. The desert was a great place to throw up, and Edna did until there was nothing left. Everything that came out dried almost instantly in the sand. It was so much nicer than putting your head near a toilet, but it didn’t seem so nice for the little lizard racing away.

Later, Brandon drooled on his iPad in the back seat. A map rustled up front. The more remote roads were still not on the GPS, and this presented a challenge to Jill, Edna’s mother, who had not consulted a paper map in years, not since the last time they came out to her husband’s parents’ house and got lost. Edward flew out to see them every once in a while, but the tiny airport he landed in was miles in another direction and down completely different dirt roads.

Jill was demoralized by the sight of her thirteen-year-old daughter crumpled in the backseat. Edna was a late bloomer, but she was becoming beautiful. Her wide-set eyes always turned heads, but her personality, left as it was, was going to spoil everything. Jill constantly wondered what she was doing wrong.

“Edna, sit up,” prompted no reaction from Edna. “You know, your rebellious stage is a drag.”

Jill didn’t see when Edna’s eyes widened because they were hidden by her palm.

“Can’t you see how much trouble you got into this year? Edna, I’m speaking to you.”

Edna peeked through her fingers to indicate listening under extreme protest, a gesture Jill ignored.

“Try to sit up. You’ll feel better if you sit properly,” Jill insisted.

“‘Rebellious’ implies that I’m rebelling against something when I’m
clearly
ill. You either have a serious lack of sensitivity, or you’re sadistic, or just stupid.”

Edna was matter-of-fact about it. Jill was speechless. She looked to Edward, who shook his head and offered the usual: “Don’t talk to your mother like that,” but Edna obviously did.

“Is that all you’re going to say?”

Jill knew her husband could assert more authority than that.

“There’s no point in arguing anymore. That’s why we’re doing this.”

Edward was one of the rare men who, as far as Edna could see, was the boss of his marriage. As a successful film director, he had a lot of practice manipulating actors, technicians, and studio executives, and Edna’s mother didn’t stand much of a chance. Jill picked her battles carefully, and this was not going to be one of them. She kept her cool. She had her own life.

Jill was a respected etiquette blogger and highly sought-after public speaker in what Edna considered to be certain uptight circles of privileged ladies whose main concern was how best to please themselves next. Their second concern was purging their collective guilt about the first one by gathering for self-improvement courses, which was where Jill’s lifestyle brand, Shimmer, came in. Shimmer dictated the best way to do anything that wasn’t a job and purveyed the products needed to do it. Edward wasn’t excited about the subject matter, but he was impressed with the amount of money it raked in and all the perks that went along with it.

Because of Shimmer
,
Jill remained an elegant version of herself at all times. This took work. Her perfect example deterred any of Edna’s possible, similar ambition, as opposed to cultivating it, which was the desired effect. Even without any enhancements, Edna thought her mother was gorgeous and intimidating. Lately she’d gotten into the habit of provoking Jill to step outside her notion of appropriate behavior, and if Edna was successful, Jill might raise her voice or let out a scream from inside her shoe closet. Edna wasn’t aware that she tortured her mother on purpose; the less perfect Jill became, the closer Edna felt to her. This could be called “negative attention getting,” but naming it didn’t do any good.

Jill and Edward would tell each other that Edna was “intelligent” and “gifted,” but, positive people though they were, these words were hollow. Edna had gone off the charts. Instead of flowering, she’d become combative, impossible to reason with, and there was an embarrassing incident at school involving a pair of dirty gym socks and a teacher’s aide. The aide was fired, of course, but when Edward secretly sympathized with the guy, he knew it was time to do
something
about what he laughed off as Edna’s severe case of “wiseass-itis.”

So, about an hour away from Grandma and Grandpa’s, Edna’s parents explained: they’d given it a lot of thought and that something would be for Edna to spend the summer in the desert with her grandparents, starting now. Edward told her that her grandmother was a tough woman, and he meant that as a compliment.

Edna’s grandparents lived in a small cabin on a large acreage near the town of Desert Palms, California, but Edna wouldn’t call it a “town.” She’d call it “coordinates on a map.” Edna knew that this was at least partially because of the sock incident and that, in fact, her father blamed her for it. It was so unfair. If someone doesn’t know the difference between “strained” and “sprained,” they should not have authority in a school. Besides, the act was clearly premeditated; no one could fish socks out of their gym bag that quickly. Edna would have the memory of that lunatic charging at her and the smell and taste of his filthy socks burned into her brain for life, but that didn’t seem to matter to anyone.

Edna whimpered things like “the whole summer?” and “it’s not my fault!” and that she “would be really good,” but she was still too sarcastic, and it didn’t matter what she said anymore anyway. Her parents had undertaken a military-like approach to this maneuver, and they were not turning back.

“I want you to be an exceptional woman, Edna, and I want you to be yourself,” Jill explained, “but you’re always out to prove something. You’ll find that not everyone appreciates your constant one-upmanship, certainly not Grandma.”

“What’s the problem, exactly? ‘One-upmanship’ or that your words are poorly chosen and you don’t know what rebellious means, and I simply take the trouble to point it out?”

“She needs to know how she’s perceived.”

Jill couldn’t deny that she’d called Edna the same thing, but not directly to her. She didn’t immediately agree to leave Edna in the desert when Edward presented the idea. He refused to put Edna on medication, and there was increasing pressure from the therapist to send her to a psychiatrist. It was time to do something radical, he explained. After Edna handed a bottle of mouthwash to the genius she’d worked so hard to get for piano lessons, Jill agreed. The award-winning pianist was insulted and embarrassed, and he never came back.

“Edna, you have no respect for others. It can’t go on, and it’s not going to be tolerated,” Jill said.

“If it can’t go on, it won’t need to be tolerated. You’re getting illogical—”

“And you’re getting a lot of time to think.”

Her father’s tone was sharp enough to end the exchange.

Edna pictured herself trapped in her grandparents’ dreary world. She was no longer sure if she was breathing. Hopefully she would pass out quickly and die. Until then she couldn’t reveal any further weakness. Perhaps if she seemed happy about this idea it wouldn’t seem like enough of a punishment, and her parents might change their minds. She could only hope that there was no way they were serious and that this was merely a sadistic joke, but the main challenge at the moment was to keep from crying.