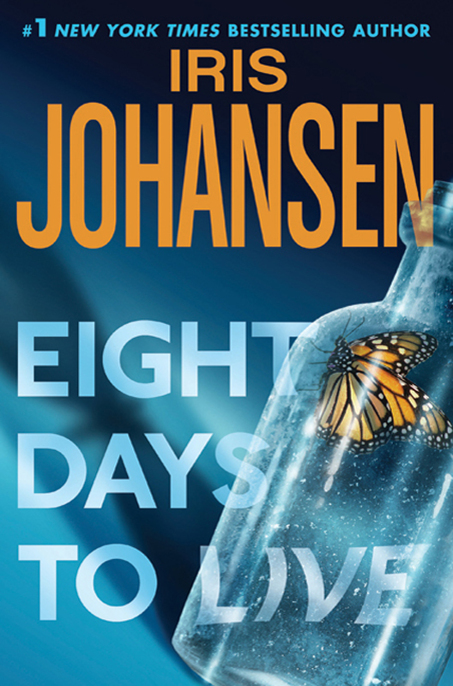 SHE WAS LAUGHING
, Jack Millet thought, enraged. Even as Jane MacGuire had left the sidewalk café, a lingering smile had remained on her lips.

He had to smother the anger, remind himself that she would not be laughing for very long.

He had watched her sitting there in the café, staring out at the Seine, and the seething anger had been building steadily within him. She had no right to look that serene and content.

He started after her, careful not to get close enough for her to know she was being followed. He knew where she was going. The Denarve Art Gallery was only two blocks away and tonight they were exhibiting Jane MacGuire’s paintings and would probably be heaping praise on her.

Blind. They couldn’t see the ugliness of the atrocity she had committed.

She moved lithely, gracefully, her red-brown hair shining as the sunlight burnished it. Everything about her shouted that she was young and vibrantly alive.

And that enraged him, too.

Eight days. But he wanted it to happen now. It was a deep hunger that wouldn’t go away.

But if he could hurt her, it would help him to wait for that final glory. If he could rip and tear at her and destroy everything she valued and loved, he might be able to keep himself under control.

Take her, torture her, and make her scream with agony.

But he had to do it himself. He could order help in the taking, perhaps Folard, but after that, he couldn’t trust his brothers to be able to stop themselves from killing her before her time. Their souls weren’t as strong as his had become through all the years of service to the Offering.

She was quickening her steps as she approached the gallery. The sun was going down, and the rays of the setting sun were causing her hair to blaze with fiery highlights.

Yes, fire is an exquisite weapon. Knives. Scalpels. Whips. There are so many ways to hurt you, Jane MacGuire.

I know them all.

Jane stopped, stiffening, as her hand reached out to open the carved oak door of the Denarve Gallery.

For an instant she couldn’t breathe, and she instinctively glanced back over her shoulder at the street behind her.

Nothing. A peaceful Parisian street on a beautiful spring day. No threat.

Imagination. A trick of the mind. Maybe a little nervous reaction because of the show tonight?

But she didn’t usually have nerves.

She glanced over her shoulder again.

She pulled open the carved oak door and went into the gallery.

“There you are.” Celine Denarve turned to Jane and frowned with mock indignation. “I thought I was going to have to send the bloodhounds after you. Marie and I have been slaving with the preparations to make this exhibit the finest I’ve ever given for any artist, and you go strolling off as if it has no importance. It’s an insult.”

Jane grinned. “You know that you would have whisked me out of here if I’d offered to stay and help.” Celine was reacting with her usual sense of Gallic drama, and it always amused Jane. High drama was so far removed from her own practical character. She had flashes of intensity and recklessness, and that might be why she and Celine had so quickly become friends, but it was Celine’s basic shrewdness and kindness that had cemented that friendship. “How many times have you told me that an artist should paint and stay out of the business of selling her work?”

“Many times.” Celine turned to her assistant, Marie Ressault, who had come out of the office carrying an ice bucket. “Put it at the bar, Marie. If I give everyone enough champagne, they will forget that Jane’s not really the Rembrandt I’ve been hyping for the past month.”

“I believe those art critics may already be a little skeptical,” Jane said dryly. “Though if anyone could convince them, you could.”

“You’re right. I’m splendid.” She smiled brilliantly at Jane. In her late thirties, Celine was sleek and dark-haired and as attractive as she was shrewd. She might know every trick in the book about pushing a young-and-coming artist up the next rung of the ladder, but she did it with honesty and a bubbly exuberance. “That’s what it takes to make a starving artist an icon.”

“I hate to tell you, but I’m not a starving artist. I did have a few successful shows before you appeared in my life.”

“Yes, but those other gallery owners didn’t make you focus on the important things. They should have made you do publicity to make you a household name.”

Celine made a face. “That’s why you make my life so difficult. I have to work twice as hard just to make you show up for an interview. I’ve begun to tell everyone that they have to forgive you because, after all, you’re just an artist with a shy and sensitive soul.”

“It works,” Celine said cheerfully. “They don’t know you.”

“That’s obvious.” Sensitive soul? she thought with amusement. She couldn’t think of any term that would be less applicable. She hoped she was kind and caring and could see beneath the surface, but she was neither fragile nor temperamental. She was only a street kid who had been lucky enough to have been born with a certain talent and the drive to make that talent come alive.

She smiled as she thought about what Joe Quinn would have said about her sensitive soul. She had been a tough ten-year-old when she had come to live with Joe and Eve Duncan, and they had accepted her and made sure that she knew how to handle herself in
any situation. He was a detective with the Atlanta Police Department, and his teaching had been both thorough and intense. Karate, Choi Kwang Do, and, when she grew older, training in weaponry. Those lessons had forged a bond that had helped draw them closer, and it was her very good fortune that she hadn’t been a prissy kid who would have forced Joe to treat her delicately. No, he would have laughed himself silly at anyone thinking she was overly sensitive.

“You’re smiling.” Celine was studying her face. “What are you thinking?”

“That you must be very persuasive to make them believe that bullshit.”

“Yes, I am extraordinary.” She took a step back and tilted her head as she gazed at the paintings beyond the velvet ropes. “The lighting is perfect. That’s essential, you know.”

“That’s what I thought.” She glanced away from the paintings to Jane. “But perhaps they’re not completely humble. I didn’t totally lie when I told those critics you were the next Rembrandt.”

“No, you’re exceptional. You’re young, only a few years out of college. In another five years, you’ll rock the art world. If you’ll let me help you.” She shrugged and changed the subject. “Lighting may help your paintings, but no amount of lighting is going to help you if you’re dressed in those jeans and shirt. Not here in Paris. Hurry. Go upstairs and change. The first guests should be here in forty-five minutes.”

“I’ll be ready.” Jane headed for the elevator. Celine maintained an apartment above her gallery, and she had insisted that Jane stay with her before the exhibit. “I promise.”

“You cut it very close,” Celine called after her. “Where did you go?”

“Just for a walk, then to the café to have a glass of wine. I thought I’d relax before the hullabaloo tonight.”

“It will be a very elegant hullabaloo. Did it work? Did it relax you?”

“Yes.” She had a sudden memory of that moment just before she had entered the gallery and that feeling of malevolence so intense that it had shaken her. Imagination. It had to be imagination. “For the most part.” She got into the elevator and firmly dismissed that chilling moment from her mind. “Yes, I guess it worked.”

“
A WONDERFUL SHOW
.” Celine Denarve locked the door of the gallery after her assistant, Marie, had left. “A
magnificent
exhibit. We’ve sold everything but the three paintings you’ve put a hold on.” She smiled over her shoulder at Jane. “How can I convince you to let me sell those, too? How am I to become a rich woman if you persist in being selfish with the best of the lot?”

“They’re not the best of the lot. I just have a personal attachment to them,” Jane said. “The technique is much cleaner in some of the others.” Lord, she was tired. She hated these art shows. The critics who dissected her work, the reporters probing how she felt when she was painting a certain canvas, the people who bought art because it went with their furniture. But she supposed she should be grateful that she’d met with such success so early in her career.

She
was
grateful. And she couldn’t have asked for a gallery owner more enthusiastic and devoted than Celine. This was her
second show at Celine’s gallery and their warm relationship made all the bullshit bearable.

“You look exhausted. You need a glass of champagne.” Celine moved toward the small bar against the wall. “Though you shouldn’t need any stimulation at all. You should be walking on air. Like I am.”

“And so you should. Tonight is as much your triumph as it is mine.”

“That is true. I did well.” She turned and smiled at Jane. “And you did well, too. You did not look bored. You were actually charming to that art critic from the
London Times
. I think I’m getting through to you.”