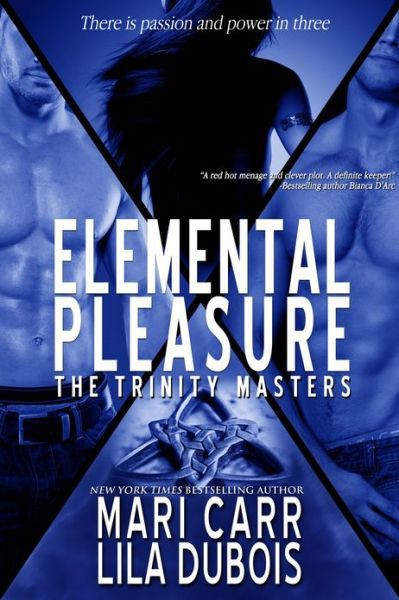 The Trinity Masters, Book One

By Lila Dubois and Mari Carr

This book is a work of fiction. The names, characters, places, and incid
ents are products of the writer
s
’
imagination or have been used fictitiously and are not to be construed as real. Any resemblance to persons, living or dead, actual events, locale or organizations is entirely coincidental.

This ebook is licensed for your personal enjoyment only. It may not be re-sold or given away to other people. If you would like to share this book with another person, please purchase an additional copy for each recipient. If you’re reading this book and did not purchase it, or it was not purchased for your use only, then please purchase your own copy. Thank you for respectin
g the hard work of these
author
s
.

There i
s power and passion in three.

When Carly Kenan joined the secretive Trinity M
asters in college, she knew
one day she’d have to pay the piper. That day has come. Returning to Boston, Carly meets former Marine Lance Glassco, a mathematician for DARPA, and Preston Kim, a celebrated chemist. Though on the surface they have nothing in common, it's clear the Grand Master thinks that together the three of them can do something amazing. And that's why he's declared that Carly, Lance
,
and Pr
eston must unite. In a
ménage
.

Tempers flare as they struggle to understand each other, but their physical attraction is explosive, and the sex leaves all of them begging for more. Pushed beyond her limits, Carly runs from Lance and Preston. What she doesn't understand is that she now belongs to them, body and soul...and they belong to her, too. When Lance uncovers a dangerous crime in Preston's firm, Carly is caught in the crossfire and the struggling lovers are forced to move beyond desire…to trust.

For Lila’s Farm Boy, for handling the technical part of this process, and for his tireless help with research. Not that kind of research! The math and
chemistry research needed to creat
e a DARPA mathematician and nanotechnologist.

Honestly, some people have dirty minds.

The Grand Master sat a
t
his desk a
nd studied the files
. Three people. Three lives. Their destinies lay in his hands.

Leaning back in his leather chair, he let his gaze travel over the portraits on the walls—paintings of the men who’d served in this position before him. Men who had been called to lead one of the most powerful organizations in the world. They had taken their position seriously, understood the gravity of their choices. His decisions, like theirs, could influence the future and bring fate to its knees.

The Trinity Masters were a secret society, as old as the U.S. sect of the Masons, but unlike them, the Trinity Masters were still a secret. It had been started by some of America’s founding fathers as they sought to replicate the networks and relationships that drove European society in America, a country that was wild and new. Hundreds of years later, the Trinity Masters counted some of the most powerful people in politics, science, the arts and even religion among its members. It was credited, though only in secret, for developing the relationships that had driven much of America’s success.

Being a member meant access to people, money and power.

In exchange, you gave them your future. And that future was the Grand Master's to decide.

He looked at the pictures again. A pretty, dark-haired woman. Brilliant, creative. An attractiv
e, serious-looking scientist. Dr
iven, powerful. And the final
one
, a soldier. Strong and courageous.

Yes, he decided. All the pieces we
re there. He sealed the letters and
prepared them for the messenger. It was time. Together, they would make a powerful bond.

She’d made a deal with the Devil, and now the Devil had called to collect.

Carly
Kenan pulled her scarf up around her neck. At home in California
, it was a sunny
sev
enty degrees, but in
Boston
, early March
still
meant winter. T
he wind whipped down Boylston Street as she stood outside the imposing Boston Public Library.

Carly
rubbed her cheek against the baby soft cashmere of her scarf. It cost more than her parents had made in a month when she was growing up. Those days were long gone, thanks to a deal she’d made nearly ten years ago. With her dark hair pulled up in an elegant chignon, a black wool coat, cream scarf and knee-high black boots
,
she looked exactly like what she was: a beautiful, successful woman.

Had it been worth it? Her success had surpassed even her wildest dreams, but
it
had come at a price. Now it was time to pay up. She wouldn’t know if
it
had been worth it until she walked
inside.

The city moved around her, everyone with somewhere to go, something to do. Another minu
te ticked by, but Carly
couldn’t bring herself to mount the steps and face the consequences of her achievements. Someone bumped her, forcing her forward a step, and she hitched her designer bag higher. The man who bumped her, chatting away on his phone, turned to glare. When he caught sight of her
,
he stopped mid-word, managed
a smile, then slunk away.

She mounted the steps. It was something she’d done a hundred times before while a student at Harvard. A computer science major, the public library had always been a chance for her to get away from her electronics, and to honor the l
ineage of
the
scholars and inventors who
had been trailblazers to the world she knew.

And in her junior year
,
the librar
y had started to play a new, secret
role in her life.

The grand hallway
with its arched
, illustrated roof
was bustling with peopl
e, though the noise was muted. It was t
he hush of a library. The heels of her boots clicked against the stone floor as she made her way to the elevato
r. She rode it to the top level
where there were fewer people. By the time she reached the rare book room
,
she was alone in the quiet hallway that smelled of books and secrets. There was a keypad on the
door. She paused, realizing the Grand Master’s
instructions hadn’t included a code. Surely it wasn’t the same one the society h
ad used when she was in college.

Pulling off her leather glove, she folded and tucked it into her pocket. As she reached out, she noticed her fingers were trembling. She curled her hand into a fist, willed herself to
be calm, then pressed the numbers
.

There was a click as t
he door unlocked. Carly
turned the handle and let herself in, careful to close the door behind her. The code was the same. She
wondered what else would be
unchanged
.

The rare book room was small, with each rack dedicated to a subject. There were a few tables, each with a box of cotton gloves placed precisely in the center, so the rare books could be handled without picking up corrosive oils. Behind a section containing maps and diaries said to belong to members of the semi-secret Masonic Temple was a section of wall with a triangle inscribed into the plaster. She touched her scarf, which hid the chain she wore with the same symbol hanging from it. Below the triangle were three words. “
Mitimur in Vetitum
.”

“We strive for the forbidden,” she whispered, tracing the words.

Her stomach c
lenched
. She was terrified of what she’d find beyond that door, of what she’d discover in the temple of the Trinity Masters.

With their help
,
Carly
’s company was now one of the fastest growing in the industry, and at only thirty-two
,
she was well on the way to becoming very, very wealthy.

Taking a deep breath, she placed both hands on the triangle relief and push
ed. A section of wall popped in
and then slid to the side, disappearing into a pocket. She passed through and waited in the darkne
ss on the other side as it
shut, sealing her inside.

Once the door was fully closed
,
the lights clicked on.

The small foyer was exactly as she remembered. The room was small en
ough to be mistaken for
a closet
if anyone who was not a mem
ber found their way in
. The walls were paneled wood, the floor
covered with
the same carpet as the outer room. An empty book c
art took up a third of the
space. Turning to her right
,
she examine
d the panels. N
umbers
were
etched into the wood, seemingly at random.

The
Grand Master’s instructions
said she was to open box thirty-one. Pressing her finger against the number
,
she felt a click. When she pulled her hand back
,
a small tray popped out of the
wall. Reaching in, she retrieved
a key and a
piece of paper.

Wait until you hear the bell.

T
he note was written by hand.
Carly
shivered a little. The Grand Master was
the head of the Trinity Masters
and a man of unspeakable power and influence. No one knew who he was, though there were plenty of rumors. At the Trinity Masters annual gatherings,
meeting
s
hidden insid
e library benefit galas, Carly
had done her share of gossiping about who he might be.

Now she wasn’t curious, she was afraid.

Note and key in hand
,
she mov
ed the cart out of the way and—with another push—opened
the door hidden in the back wall. It revealed a narrow elevator. When she pressed the but
ton, the door opened and Carly
stepped in. She took a moment to gather he
rself as the small
elevator took her down to the
sub-basement. When it
stopped and the door slid to the side, she bit the inside of her cheek to center herself.

A long marble hallway stretched out in front of her. Columns supported the double-high arched ceiling, which was a smaller replica of the grand hallway above. Her footsteps rang as she made her way along the hall, the sound bouncing off the walls to echo down to the grand double doors at the far end. There were no books here to muffle the sound. At the midway point
,
there were openings in the walls, one to the right, an
other to the left. She’d been down
the left hallway before. There were changing rooms there, elegant as the locker rooms in a fancy spa. For ceremonies
,
all members wore robes to protect their identities, and those with the most need for secrecy had private dressing rooms.

The Twin by Bakker, Gerbrand
A Street Cat Named Bob by James Bowen
Operation Yes by Sara Lewis Holmes
A Diet to Die For by Joan Hess
Mackenzie Blue by Tina Wells
Freeing Grace by Charity Norman
Burned (Vanessa Pierson series Book 2) by Plame, Valerie, Lovett, Sarah
Point of No Return by Susan May Warren
The Yellow Eyes of Crocodiles by Katherine Pancol
Nomads of Gor by John Norman
Our partner