Read Elevation of the Marked (The Marked Series Book 2) Online

Elevation of the Marked (The Marked Series Book 2) 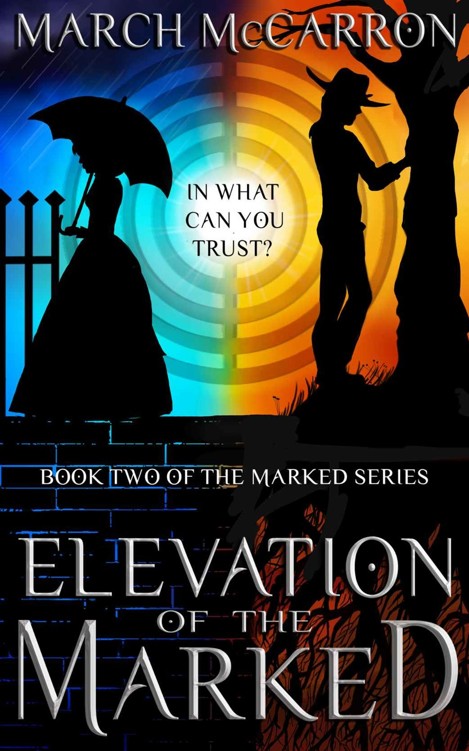 ELEVATION OF THE MARKED

who has supported my dream in every way.

Elevation of the Marked
is the second installment in a series, and is not a stand alone novel. This story begins where the first left off, with little reintroduction to to the world, characters, and events of
Division of the Marked
. For those readers who need a refresher on the first book, I have included a
summary
and a
glossary of terms
at the back.

This story is darker than the first, and may not be suitable for younger readers.

A white-gloved hand placed a tumbler upon the table, setting ice cubes jangling against crystal.

Arlow eyed the amber liquid and deemed its color acceptable. He placed his fingertips about the rim, his wrist slack. “My thanks.”

Something about his countenance made the waiter pause. “If the beverage is unsatisfactory…”

Again, the waiter—a diminutive man with an unfortunate haircut—rocked on his well-polished shoes. “I could certainly ask the barman to make one with less ice, if you’d prefer.”

The tinkle of conversation in the Palace Restaurant chimed in harmony with the clinks of glasses, the scrapes of silverware against plates. The place was unusually full, given it was that odd time of day between lunch and dinner.

Across the room, the head of palace security, Harrion Alboss, caught his eye. Arlow offered a slight smile and raised his glass in a silent, cross-room toast.

He then turned attention back to his overanxious attendant. “My good man,” Arlow said, rather magnanimously, in his opinion.
“You may inform your barman that he has struck upon spirituous perfection. Less ice and the drink would be insipid, more should render it overcrowded.” To prove he spoke truth, he raised his glass, took a careful sip, and smacked his tongue to the roof of his mouth.

In fact, it
was
first-rate—a good, full body with a fine finish. “It will do.”

Vendra pursed her lips. “Are you ever
not
ridiculous?”

“I should hope not,” Arlow said, flashing his most charming smile. “Seriousness suits me ill.”

Vendra scowled. “Which is why I have so little confidence in your word.”

Arlow leaned deeper into his chair and crossed his feet at the ankle. He glanced around the restaurant again. At a nearby table, the newly married Mrs. Jenner—an attractive little minx, he had to acknowledge—sent him covert smiles. He winked at the girl, as yawning in her direction wouldn’t be the thing.

For a minute, he wondered which of them were the falser—the women of court or himself. They, with their simpers and coquetry, hair extensions and masks of talcum powder, seemed about as genuine as the ‘authentic Chaskuan silk’ sold in the back alleys of Accord. But he and his increasingly insincere attentions could hardly be labeled honest, either. Like actors on a stage, they delivered their lines and wore their costumes; all polish and no purpose.

He continued to scan the room, finding it mostly occupied by ladies, several of whom he had been taking measures to avoid. His time amongst his sisters of the Cosanta, women of substance and passion, must have ruined him for such creatures as these.

Vendra cleared her throat, and Arlow’s gaze snapped to her.
Not
all
are better company
, he amended as he took in her irritated expression. “Regardless of your confidence,” Arlow answered at last, “I mean what I say. Everything is prepared. It must be done between four and four-thirty in the evening, but may be triggered on the day of Quade’s choosing. All I need do is give the signal.”

Arlow shook his head with a mocking
tsk-tsk
. “Some faith, dear sister.”

Vendra crossed her arms before her robes and leveled him a scornful look, though she refrained from responding. Being a fellow Cosanta, she could scarcely object to his calling her ‘sister.’ Arlow’s eye alighted upon her exposed wrist, where the tip of a scar peeked from beneath the fabric. He had noticed other such scars on her arms and back in the past. He couldn’t imagine what job Quade had assigned her, his druggess and right-hand-woman, that should have resulted in such injuries.

“Four o’clock,” she said, her black brows descending. “You mean to do it during the royal audience?”

“Quade desired it should be public.”

“And what if I said that today is the day?” she asked, a challenge in her voice.

He toasted her, a vision of insouciance. “Then today should be the day.”

A flurry of whispering pulled Arlow’s attention to the doorway. He cursed under his breath when he identified the new arrival, feeling his affected nonchalance buckle in an instant. To show his respect, he stood with the others, his chair legs scraping the hardwood floors.

Princess Chae-Na Bellra smiled prettily and motioned that the assembly should sit. She wore a silver dress that perfectly complemented her medium complexion, her black hair heaped in a pyramid of curls atop her head.

“Please, I have no wish to interrupt your meals. Do sit.”

When no one moved to comply, all fearful of being the first to sit in her presence, she stepped forward and placed her hands on the back of Harrion Alboss’s chair, gesturing for him to be seated. “Truly, enjoy your food.”

Arlow studied her unassuming demeanor not for the first time, his mouth downturned. He could never quite decide if the princess indeed lacked pretense, or if she were merely the most accomplished actress of the lot.

Harrion obliged and others soon followed suit, returning to their meals. That task complete, Chae-Na scanned the gathering and, much to Arlow’s disconcertment, her eyes locked upon his and brightened.

She wended her way towards him, leaving her entourage to ensconce themselves at the finest table.

“Arlow!” she said, beaming. “It’s been an age! I have hardly seen you since you saved me that awful night. I hope you have recovered.”

He bent over her hand and darted a quick kiss across her knuckles. The touch of his lips sent gooseflesh up her arms. Her dark eyes held open admiration.

Normally, he would have paid her a compliment, suggest that she outshone every other woman present—which she did—but not even he could manage such falseness when guilt weighed heavily upon him.

She seemed momentarily disappointed by his shortness, but assumed a polite expression. She curtsied to Vendra and said, “I have surely interrupted. I shall leave you to your meals, then.” She glided back to her friends, who were laughing behind hands and gawking.

He plunked into his chair and proceeded to throw back the remainder of his whisky.

“Today
is
the day,” Vendra said.

Arlow was so surprised, he sputtered. His lungs ceased to operate, refused to draw breath. “Today?” he wheezed.

Vendra smirked. “Yes. Quade telegraphed yesterday.” She reached into her pocket and produced a small slip of paper. Arlow seized it, his hand feeling oddly heavy. He read the short message and glanced at the clock on the wall. “We have only thirty minutes.”

She quirked a brow at him. “Does it take you longer than half an hour to walk to the throne room?”

Arlow hid his shaking hands in his lap. “No, of course not. As I said, everything is in place. It can be done.”

“Very good.” She stood, tossing her linen napkin on her unused plate. “Then you’d better pay for your drink.”

Arlow assented numbly. He carefully averted his eyes from a particular corner of the room, where the ringing of feminine laughter pulled at his senses. He left an uncharacteristically generous tip, straightened his robes with a forceful jerk, and strode from the restaurant in Vendra’s wake.

The palace grounds, an expanse of manicured lawns broken by walkways and gardens, sloped gently towards the front gates.

Vendra set a dauntless pace up the avenue—the common name for the roofed, pillared walkway that connected the palace commerce sector with the throne room. Arlow’s self-assurance withered steadily as they marched. He shot sidelong glances at his companion. Her face was set in determined lines. She showed no outward sign of doubt or hesitance; in fact, in all of their dealings together, he had never witnessed in her a single flicker of compassion.

Arlow was no fool. He saw the effect Quade had on people, he felt it himself and fought the sway of that honeyed voice. Vendra was Quade’s, body and spirit. She was his oldest supporter, his lover, his right arm. When Arlow looked into her eyes, he detected something unnaturally flat, a certain deadness within.

These thoughts not bolstering his weakening resolve, he turned his face towards the grounds, admired the orderly beauty. His eyes were trained upon an empty hill near the lake when, quite suddenly, the hill was no longer empty. Two figures appeared in an instant.

Vendra, whose gaze had followed his own, snorted. “They’d have been wiser to keep their distance.”

“Perhaps we should not move forward today.”

Arlow watched his two friends embrace, and a soft ache took up in his chest. Then, as suddenly as they had appeared, Yarrow was gone. Ko-Jin alone took off down the hill, his braid whipping in the wind, his gait slouched.

Vendra laughed, a chilling sound. “He’ll be suffering from the stoppage in his dosage. He’ll not pose much of a threat just now. We proceed as planned.”

The Demetrios Bridal Bargain by Kim Lawrence
Heights of Desire by Mara White
Inevitable Detour by S.R. Grey
Tempted by His Target by Jill Sorenson
Cry Father by Benjamin Whitmer
The Fiddler's Secret by Lois Walfrid Johnson
Stagger Bay by Hansen, Pearce
The Lone Ranger and Tonto Fistfight in Heaven by Sherman Alexie
Ghosts of the Falls (Entangled Ever After) by Gilman, Sarah
A Sudden Sun by Trudy Morgan-Cole
Our partner