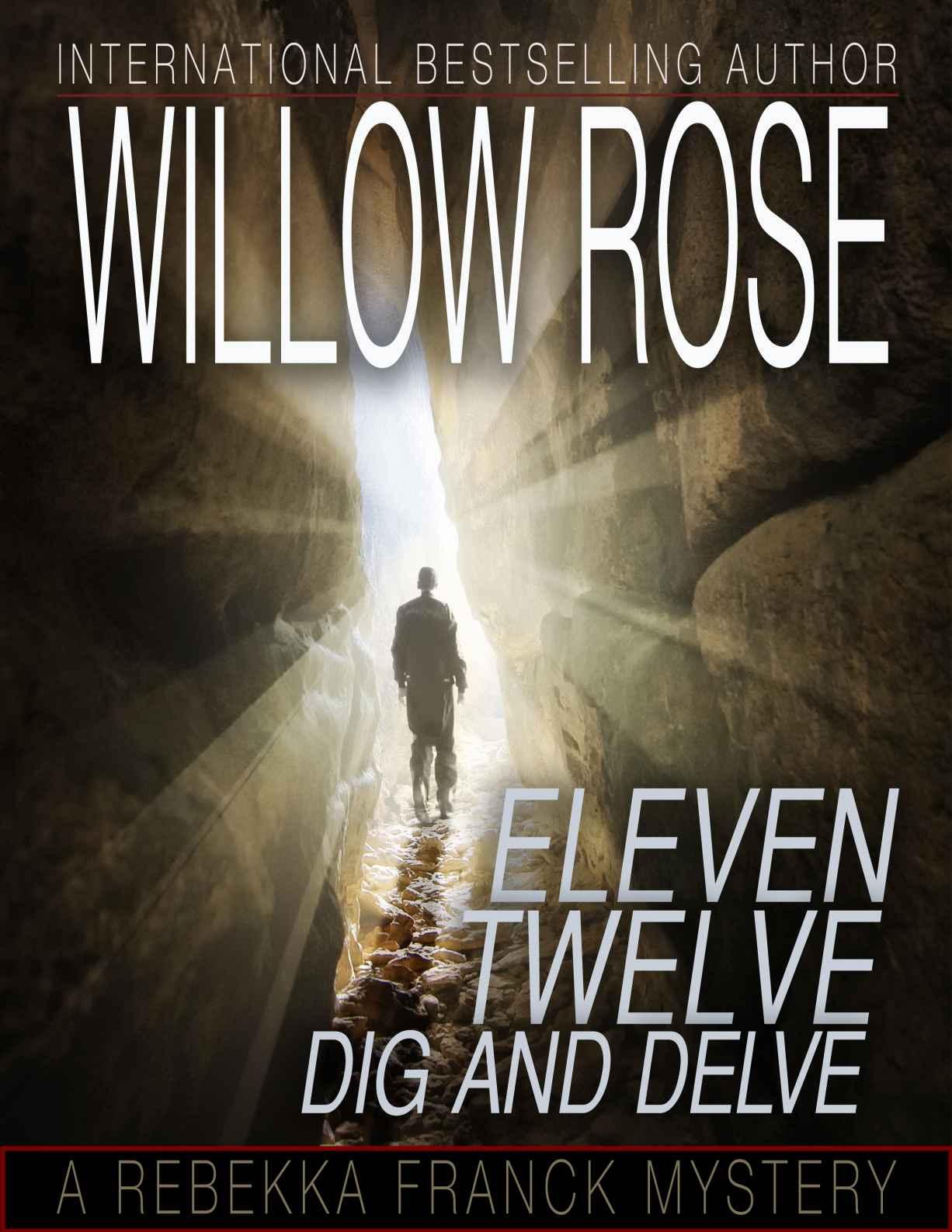 No part of this book may be reproduced, scanned, or distributed in any printed or electronic form without permission from the author.

This is a work of fiction. Any resemblance of characters to actual persons, living or dead is purely coincidental. The Author holds exclusive rights to this work. Unauthorized duplication is prohibited.

Special thanks to my editor Janell Parque

A sinkhole, also known as a sink, sink-hole, shakehole, swallet, swallow hole, or doline (…) a depression or hole in the ground caused by some form of collapse of the surface layer.

From Wikipedia, the free encyclopedia

I
T WAS ONE
of those things no one could have expected, and from where he was standing Claus Frandsen couldn’t have seen it coming, even if he knew in advance. It wasn’t something anyone felt or even suspected could happen in the neighborhood, especially since it was such a
nice
neighborhood. It was one of those that had a great school within walking distance, one where the owner’s association made sure people’s hedges met the right requirements and never became too high or too low, one of those that every year arranged a Christmas banquet at the community center, where most of them would attend and bring a dish. The kind of neighborhood where your children could play in the cul-de-sac without you having to keep a constant eye on them. It was a neighborhood where young people would settle, have their children, and then grow old there. They rarely left. It wasn’t a particularly expensive neighborhood, just a really good one with good and decent people.

Claus Frandsen from number ten was walking out his front door to get the newspaper. His dog Fifi, a small and, according to the neighbors often too loudly (but they would never tell him) barking poodle, tagged along with him. It had finally stopped raining after days of heavy rainfall. He was wearing his bathrobe over his PJ’s that his wife had ironed so neatly the day before, but were now all wrinkled up after a long night of sleep.

Claus Frandsen was whistling. He wasn’t usually a particularly happy or positive man, but this day was different. This morning, he had finally managed to persuade his wife, Ana, to let him have that motorcycle he had always dreamed about. Now that he was retired, he thought it was about time he realized his dreams.

“But I want to travel,” his wife had said, once he had aired the idea for the first time.

“Then let’s travel on my bike,” Claus had argued.

“I’m not going anywhere on a thing like that,” she said.

And that had been the end of that discussion so far. Until this morning, when she had finally caved in. She had rolled over to his side of the bed and looked into his eyes with a look Claus knew only meant that she wanted something from him.

“If I let you have a bike, will you buy me a house in Greece where we can go for three months every summer? Just like the Jespersens have?”

It was an expensive deal, but well worth it, Claus had thought. Now as he was whistling and walking to pick up the paper, he felt very satisfied with the deal. It was only too bad that he wouldn’t be able to bring his bike with him to Greece every summer. It was, after all, in the summertime that it was best to ride a bike. The rest of the year it was cold, well it was cold for the most part in Denmark, but if you were lucky you could get a month or maybe three good weeks in July or August.

We should go in the winter instead
, he thought to himself as he opened the mailbox and pulled out his newspaper. The headlines talked about the growing tension between Russia and Ukraine, about the possibility of a war in Europe again.

Claus Frandsen scoffed.
Had history taught them nothing?
All this aggression led to nowhere. Everybody always ended up as losers in war. Claus should know. After spending years trying to help clean up the mess they made in the former Yugoslavia in the early nineties, as the Commander in Chief for the Danish Battalion, he’d seen his share of atrocities and heard a lot of stories that didn’t need to be told again.

When will they ever learn?

Fifi barked and he petted her on the top of her curly head. It was Ana’s dog, but he had kind of grown to like her over time.

“Yes, Fifi, I know you’re anxious to get your breakfast and, frankly, so am I,” he said.

The two of them started walking back towards the house as Claus spotted his neighbor from number twelve, Mrs. Sigumfeldt. She was walking to her car, followed by her three little munchkins, ages six, eleven, and twelve.

“Good morning,” he chirped and waved. “It’s going to be a beautiful one.”

Mrs. Sigumfeldt shooed her children into the station wagon one after the other, then waved back.

“We’ll have to see about that, Mr. Frandsen. Looks like it won’t stay dry all day. Got them big dark clouds coming at us again. Enjoy your day.”

Fifi barked like she wanted in on the conversation, but Mrs. Sigumfeldt had already closed the door and started the engine.

Claus Frandsen called her towards the door and opened it for the small dog. “Come on, Fifi. Let’s go get breakfast.”

The two of them had about fifty seconds more to live.

M
RS.
S
IGUMFELDT WAS
late, as usual. In the back seat of her minivan, the kids were arguing—also as usual. As a matter of fact, everything seemed to be just as usual, and it might as well have been, if it hadn’t been for the disaster luring underneath the road on which she was driving.

She couldn’t hear it because of the kids quarreling inside the car, but underneath the wheels of her Kia minivan, the ground was crackling, some would later in interviews on live TV refer to it as the ground sighing; others would say they had noticed a wailing rumble in the distance, like the ground was weeping. If that was true or just something they made up because they wanted to be on TV, no one would ever know.

“Could you please just settle your differences?” Mrs. Sigumfeldt said, diplomatically and emotionlessly to her children in the back. She didn’t even bother to get really upset with them anymore. The arguing went on, day after day, hour after hour, and she had learned to block it out, to simply stop caring in order to survive.

They didn’t hear her and kept arguing. It was the oldest, Jacob, and her middle child (always the troublemaker), Christian, who were discussing something, and had been all morning. Mrs. Sigumfeldt had no idea what the discussion was all about, but she seldom did. She rarely cared enough. It might have been a Minecraft discussion, it might not. At that point, she didn’t care anymore. She was late for her work as a lawyer at Morch & Partners, a highly esteemed law firm where they expected her to arrive early and leave late, if she wanted to keep her position, for which there were
hundreds of applicants out there just as experienced as her that would kill for her job if she didn’t want it
. (Her boss, the company’s senior partner Mr. Morch never hesitated to tell her when he wasn’t satisfied with her work-ambition, as he liked to put it.)

Mrs. Sigumfeldt looked at her cellphone and checked her emails while driving down the street of Blegevej in the nice neighborhood in Stoholm outside of Viborg. She grumbled when she noticed an email she was supposed to have answered on Friday, before the weekend. Now, Mr. Morch was going to have a fit.

Oh, how she loathed Mondays.

“Mom! Watch out!” Jacob screamed from the back seat.

Mrs. Sigumfeldt looked up just in time to spot the car approaching from the side, just in time to avoid it crashing into her. She lost control of the car and hit the brakes, causing the tires to squeal. The car skidded sideways and ended in the hedge of Mr. and Mrs. Bjerrehus in number six, who had invited the Sigumfeldts for dinner once, but never again after their boys broke their very expensive Ming-vase bought for twelve thousand kroner on auction in Viborg.

Mrs. Sigumfeldt screamed as the car slid sideways into the bush and the airbags were deployed.

The door to the car was opened and a woman looked inside. “I’m so so sorry. I didn’t see you.”

Mrs. Sigumfeldt pushed herself free from the airbag and stumbled outside. “Are you alright?” the woman asked again.

Mrs. Sigumfeldt grumbled, annoyed, and blinked her eyes to better focus. “Oh, it’s you,” she said.

The woman that had hit them in her Toyota Corolla was Mrs. Jansen from number five across the street. It was well known in the neighborhood that her husband, Mr. Jansen, who was a truck driver, was beating her. To cope with the abuse, Mrs. Jansen, a nurse at the hospital in Viborg, numbed herself with strong sedatives that she stole from the hospital and flushed them down with cheap gin.

Usually, Mrs. Sigumfeldt, like everyone else in the neighborhood, had the highest amount of sympathy for the poor Mrs. Jansen, well, except when she was crying and screaming like a crazy person in the street at night and ringing their doorbells, drunk and high on pills. But her goodwill towards her and empathy for her situation disappeared right at that moment.

“My children!” Mrs. Sigumfeldt said, and pushed Mrs. Jansen aside. She pulled the back door open and looked inside the car.

Six eyes looked back at her, and she breathed with relief. “Is everyone alright?” she asked.

All of them nodded. Their eyes were wide and anxious. There was no blood, no bruises. They were all in their seats still.
Shaken, but not stirred
, Mrs. Sigumfeldt thought to herself. She didn’t know why. This was hardly the time for witty comments.

Mrs. Sigumfeldt looked at her youngest boy, Frederic. “Did anyone get hurt?” she asked.

They all shook their heads. “We’re alright, Mom,” her oldest, Jacob, said. “Just shocked, that’s all.”

He swallowed hard, and then reached out his arms towards her. She took off his seatbelt and held him in her arms. “I was scared, Mommy.”

I
N NUMBER SEVEN,
David Busck was sitting on the bed. It was his brother’s house. His feet were on the wooden floor, his elbows leaning on his knees, his face hidden between his hands.

It was morning once again, and David hated those more than anything. A new day was beginning, the sun rising on the horizon. David couldn’t see it, since he hadn’t bothered to pull away the curtains. In the kitchen, he could hear his brother and his wife talking. Their four-month old baby was crying. Once again, they were probably discussing whether David would get out of bed today or not.

He couldn’t blame them.

He had lost track of the days, but it was more than two weeks he had spent in this room that was one day supposed to be the nursery. They had taken David in when he needed it the most, and for that, he was eternally grateful.

David sighed and looked at the gun on the table by the bed. They didn’t know he had it. No one knew. He had bought it once he returned to Denmark…from some guy on the streets of Copenhagen. He didn’t care that it was illegal. That was before his brother asked him to come to Jutland and live at his house until things got better. Till everything settled down a little.