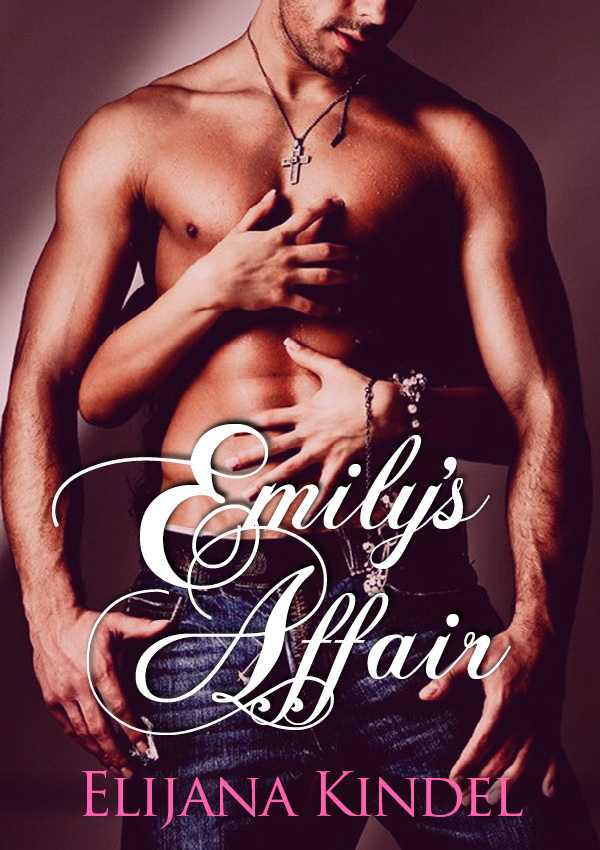 This is a work of fiction. Names, characters, organizations, and events portrayed in this novel are products of the author's imagination and/or are used fictitiously. Any resemblance to any actual living or dead person is purely coincidental. No part of this book may be reproduced, scanned, or distributed in electronic or printed form without permission.

Lee Stafford was in heat and there wasn't a damn thing she could do about it.

By herself, that was. Lord knew she'd tried enough times that she was in imminent danger of never being able to walk right again. Let alone enter a church with her dignity intact.

Hell, as it was, Lee was exerting every ounce of willpower she possessed to put one 3-inch heel in front of the other and sashay her ass across the room to reach her mailbox. It wouldn't have been so bad if every step hadn't caused her thighs to slide together in that special way that jumpstarted the sexual revolution that'd begun the day she set eyes on the tall, lean Adonis inhabiting the condo across from hers.

The man was lethal.

And he knew it.

He didn't need to flaunt it. It was written in every move he made. It was both awe inspiring and frustrating as hell to know that, in all of her twenty-eight years, Lee had never come across a man who made faded jeans and a body hugging black t-shirt look sexier than homemade sin.

It had to be a crime to look that good in casual wear and ooze complete and total alpha-male-ness the way this man did.

He was definitely an alpha. A natural one at that.

Which, Lee groaned to herself, explained all too well why she was feeling the call of the wild.

As she continued across the polished mailroom floor to her box, Lee let loose her sexually repressed libido and let her imagination replay the fantasies that had her contemplating more than a hint of exhibitionism. She glided past the marble table situated between two overstuffed chairs in the middle of the room. Oh, the things she'd thought long and hard about doing to and with him on that table. On the floor. Against the wall of mailboxes.

Lee drew in a deep breath and relished the slide of fabric against her breasts. The things she needed and wanted to do with that man against the wall of mailboxes… like being pinned against the rows of mailboxes with him right behind her. Oh, God. She loved that fantasy. She'd imagined it enough times this month alone that she could see, hear, feel, and taste every toe curling second in excruciating detail.

He would ease up behind her and make his presence known with the sweet caress of his hot breath on the nape of her neck. Her eyes would drift shut and her body would sway back towards him. His breath would catch and she'd feel him drawing in her scent as if to memorize it and imprint it into his soul. The heat radiating from his front to her back…
ohmiword
, yes, she felt the heat of him pinning her to the wall of mailboxes. His hand and those long, tapered fingers with calluses in just the right places would brush against her and tease their way down the slide of her shoulder across her spine to the flare of her hip.

Oh God, she needed him to touch her.
Badly
. To knead her skin and continue his slow exploration of her backside. She wanted him to cup her rear with his other hand and slowly work his way up the slope of her back to the curve of her neck. Where he'd thread his fingers through her shoulder length blonde hair and nudge it out of his way. With one hand nestled on her hip and the other teasing the nape of her neck, his fingers would bring her to a slow, simmering boil.

His lips would brush the shell of her ear as he leaned in to whisper his intentions of taking her right there against the wall. He'd order her to touch herself and pleasure herself for him. He would watch and whisper suggestions that drove them both of out their minds. And when she was a flicker of a touch away from tumbling over the edge, he'd yank up the hem of her short skirt and, holding her by one shoulder, would shove her panties aside and drive into her with one… long… thick… powerful…
thrust
.

Lee shivered and groaned to herself. It had to be a sin to have an imagination like hers where with every step she could feel the hard, slick slide of his thrusts… timed to perfection with the single intent of showing her who was in control of this rodeo.

Oh, how she longed to top that man from the bottom. In front. Behind. Under. Over. Any and every way she could.

And she could do it, too. If she wanted to, because if there was one thing any business
man
in the greater Washington DC area who'd done business with Lee-The-Barracuda-Stafford knew was that she was a master at making a man do whatever she wanted.

And she wanted this man.

Right here, in the mailroom of her condominium complex.

Oh yeah, it was good to be her. Because she knew exactly how she'd do it. Lee would let him take the lead and savor each and every hard stroke. She'd let the tension build until she sensed he would be as lost in the act as he wanted her to be. Then Lee would slowly—ever so slowly—turn her head and peek at him from the corner of her eye and then—

He was there. In the flesh. In the mailroom. Behind her.

Jake Grayden managed—barely—to refrain from doing a small, but obligatory celebration dance. After two months of near misses, passing glimpses, and measly 'hello, beautiful's, the first phase of his campaign was a go.
All the sleepless nights he'd spent constructing his plan were about to pay off.
His strategy to engage in his first serious foray into the realms of sober dating was on track and—he glanced at his watch—right on schedule.

He and the newest tenant in the small condominium complex were about to
accidentally
meet at the mailboxes.

Jake slowed his approach to the mailroom and initiated a leisurely perusal of his target.

She wasn't tall, but that was fine. He wasn't particular about height. Although those three-inch heels she wore did wonderful—no, incredible—things to her legs. And those legs, he groaned to himself. They were tone and firm, moving like a well-oiled machine under stockings that begged to be peeled off her.

Jake hoped she wore a garter belt. She looked the type to wear a garter. She had to be. So that's where he would start. He'd slip his hand under her short, ass hugging skirt and tease the bare insides of her creamy thighs. His fingers would skirt the fringe of her panties, which he assumed to be cotton. Her back would arch and she would moan his name, then she'd dig her long, red polished nails into his shoulders. He would—while she panted for him, of course—unhook the garter and pretend to ponder the question of the century.

Leave the stockings on or peel them off her quivering body?

Jake walked around the polished table in the fancy, hotel lobby-ish, mail area and decided that the table would be as good a place as any to set her on and begin his exploration.

After peeling the stockings, he would—while kissing her senseless and wrapping her legs around his waist—carry her over to the table and let her rest that perfectly molded derriere. Next, he would need to hold her breasts in his hands. He needed that badly. She wasn't what he would consider well endowed, but she was definitely not flat as a board. Jake flexed his hand and imagined she would fit perfectly in his palm.

Yes, she would fit him perfectly.

Slowly, he would unbutton the silk blouse tucked into her skirt which was—at this particular moment in his overheated imagination—bunched around her slender waist. He'd caress her ample bosom through the sheer fabric of her bra and watch her go insane with passion in his arms. Her eyes would darken. Her breathing would increase. Her hips would grind against his erection that was, at this very moment, straining at his button fly to get a glimpse of its tormentor.

Down boy
, he ordered silently.

A button threatened to give way. Lucky for Jake, there was more than one button holding ol' Johnny back.

To divert his musings, he glanced at her left hand. Jake smiled to himself, no ring. Each time he saw this mysterious new tenant, he checked her ring finger. After two-long-cold-shower-filled-months, he'd learned two things. She rarely wore jewelry and the effectiveness of cold showers was a myth.

Ol' Johnny demanded the return of the mental seduction and Jake gave in with good grace.

After removing her shirt during the exploration on the table, Jake would take a second or two to study the curve and slope of her throat. Anything that would allow him to taste the satiny skin of her neck. Man o' man, the lady had a great neck and the way she arched it when she flipped her long, blonde hair over her shoulder… s
weet Heaven
, have mercy on his poor, unworthy soul. The simple act stirred more hormones in his body than staring at a
Playboy
centerfold had when he was sixteen.

Jake was not ashamed of his reaction to this one woman. Not now. Not after two months of observing, planning, and wanting. At first, he'd been puzzled and slightly concerned. There was something about her that called to him on a primal level that he'd never imagined. She possessed an air of innocence and vulnerability that had him craving to play protective warrior to her image of sexy, confident princess. The bizarre part was that the protective instinct she invoked did not set off warning bells in his head.

In fact, he liked it.

He liked it so much that he was
almost
too damned aroused to care if the lady wanted a one night stand that would take a lifetime to recover from. It would, of course, be too bad for her if that was all she wanted. Because Jake was prepared. He had a contingency plan and he wasn't afraid to use it. After all, he'd gone without intimate female companionship for as long as he'd gone without drinking and, if he could handle almost five years of that, then he could handle playing the slow seduction game a little longer.

Engaging the Boss (Heirs of Damon) by Adams, Noelle
Butterfly Dreams by A. Meredith Walters
Oppression by Therrien, Jessica
Michaela's Choice by Lisa Harris
Whisper In The Dark (The McKinnon Legends-- The American Men Book One) by James, Ranay
Jack and Jill Went Up to Kill by Michael P. Spradlin
Her Perfect Getaway by Emma Jay
[Oxrun Station] The Bloodwind by Charles L. Grant
Search for Safety: Killing the Dead Book Two by Richard Murray
Shoot the Moon by Billie Letts
Our partner