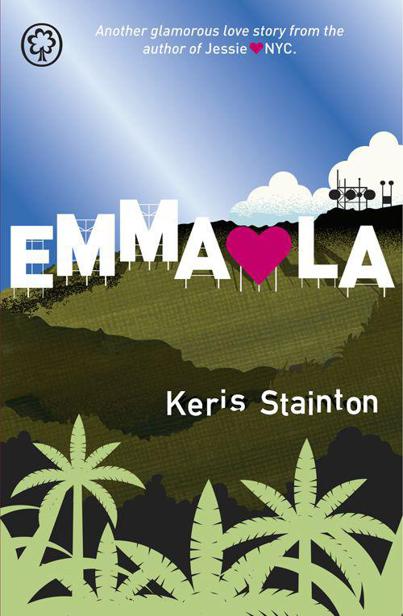 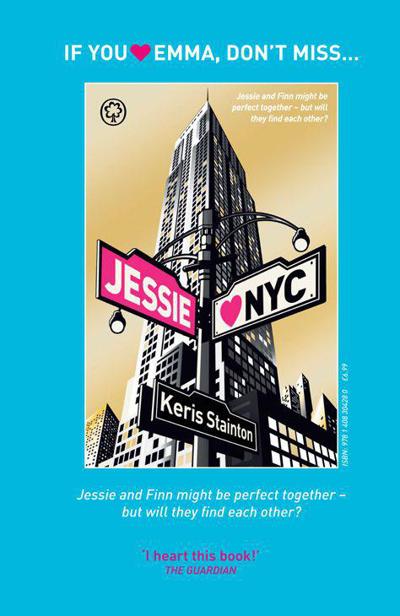 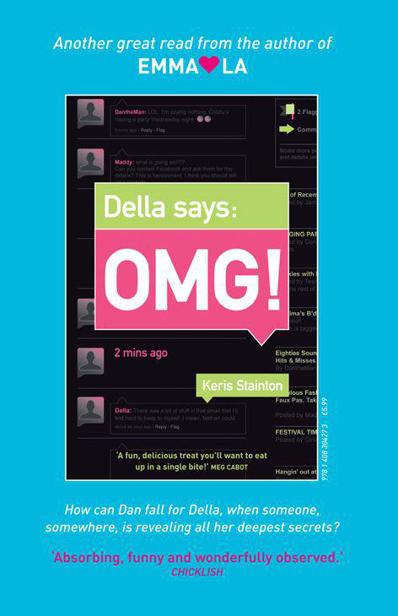 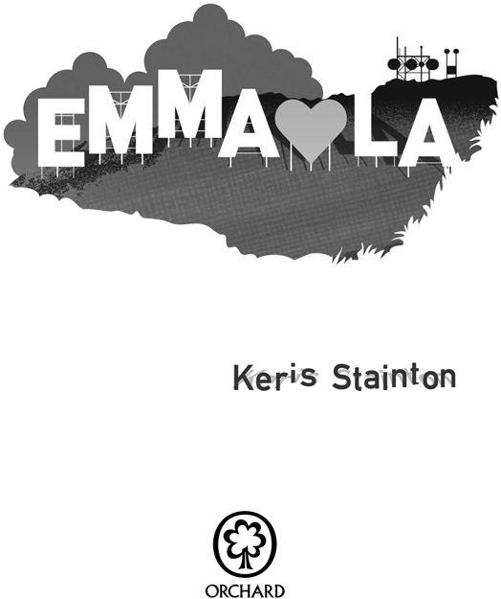 First published in Great Britain in 2012

The right of Keris Stainton to be identified as the author of this work has been asserted by her in accordance with the Copyright, Designs and Patents Act, 1988.

Orchard Books is a division of Hachette Children’s Books,

‘Most girls of your age would jump at the chance to move to California,’ my mum says. She had been standing in front of the fireplace to make the big announcement, but, thanks to my reaction to it, she’s now sitting on the sagging sofa next to me.

I stare at her. ‘You are joking, right?’

I glance at my sister, who’s sunk deep in a beanbag in the corner of the room. She’s fiddling with her phone, a half-smile on her face.

She glances up at me from under her floppy fringe. ‘I think it’ll be cool to live in Hollywood.’

‘Near enough,’ Bex says, grinning. She’s a drama dork, my sister. I bet she thinks she’ll be talent-spotted at the airport and have her own Disney XD show by the end of the year.

Mum rubs her eyes and then says, ‘Oh, damn!’ when she realises she’s wearing make-up for once and she’s just smeared mascara over her face.

‘I know,’ she says, licking her finger and wiping under her eye. ‘I know it’s going to be hard for you to leave Bramhall and all your friends, but if you don’t come with me, you’ll have to live with your dad, so—’

‘I’m not doing that,’ I interrupt. And then I roll my eyes. ‘I’m not saying I’m not coming. I know I have to come. I’m just not happy about it.’

‘And you’ve made that perfectly clear,’ Mum says.

‘What does Dad think about it anyway?’ I ask. ‘Did he suggest we go live with him instead?’

Bex’s head snaps up from her phone – she’s obviously been texting all her friends:
OMG
!
MOVIN
2
LA
!

‘He’s all for it,’ Mum says, and rubs her eyes again. ‘I mean, obviously he’s not thrilled that you’re going to be so far away, but he sees what a great opportunity it is and he thinks a new start will be good for all of us.’

‘He’ll be able to come and visit, won’t he?’ Bex says. Her cheeks have gone red, probably because she was so busy texting in her excitement, she forgot all about Dad.

‘And he’ll be able to get on with his new life without having to worry about us,’ I say. ‘Does he still have to pay maintenance if we move thousands of miles away?’

‘That’s between me and your father,’ Mum says, rubbing the back of her neck and rolling her shoulders back.

She looks so tired that I feel bad for acting like such a brat.

Her face lights up and she looks years younger. ‘It’s an incredibly opportunity. I wouldn’t even consider doing this if it wasn’t – you know that. I’m going to be working on the properties and evolution of young high-mass stars and—’

‘Where will we live?’ I interrupt. I know from past experience if Mum starts talking about her research we’ll be here all day. ‘Somewhere better than this?’

I close my eyes and try to picture myself in LA. Lying on the beach. Rollerblading in Malibu. Shopping on Rodeo Drive. For some reason my subconscious has given me enormous fake boobs.

I open my eyes and look around this room, with its peeling wallpaper, threadbare carpet and view of the redbrick wall of the factory opposite.

‘If we really, really hate it…’ I start.

‘We can come home, of course,’ Mum says.

Mum drops her arm around my shoulders and gives me a quick squeeze. ‘Thank you.’

The house phone rings and she rushes to the kitchen to answer it. I scuff a torn bit of carpet with my shoe and think about telling my friends that I’m moving to LA. I’m not sure they’ll really care. My friends are great, but my best friend Jessie moved to New York last year and I certainly haven’t replaced her. It’ll be funny, us both being over there. But I think LA is actually further from New York than we are now. Still, we’ll be in the same continent, at least.

‘Do you really think Dad wants to get rid of us?’ Bex asks.

She’s still got the two little red smudges on her cheeks that she always gets when she’s angry or upset.

‘Not really,’ I say. ‘Or not permanently, anyway.’

‘Why don’t you want to go, Em?’ she says, as her phone beeps and she glances at the screen. ‘It sounds so cool.’

‘I’m sure it’ll be great,’ I say, getting my own phone out of my pocket. ‘I’ve just had enough of change this year.’

‘I know what you mean, but that’s all been bad change. This will be good change.’ She grins at me and goes back to texting.

I head up to my room, tripping over the loose bit of stair carpet as I do almost every single time I pass it. I hear Mum on the phone saying, ‘That sounds incredible. And how much is it?’ and wonder who she’s talking to.

In our old house, my room was my sanctuary. If ever I was upset or worried or angry, I felt better in my room. Mum and Dad let me choose pretty much everything for it and it was so me. It had a bay window with a window seat, built-in bookshelves and a fireplace that I’d filled with candles. I put framed pictures on the walls rather than posters and I had this huge starburst mirror that Dad found at a car-boot sale and knew I’d love. Back when he cared about what made me happy.

My room here is bigger than my old room, but that’s about the only thing in its favour. It’s just plain and square and boring. And painted magnolia. The mirror and the pictures are packed up now, we’re not allowed to hang anything on the walls in this house because it’s rented and, according to the landlord, the brick is too soft. But there’s no point in thinking about it. Things change. I have to get used to that idea. Jessie’s parents split up a couple of years ago and her mum and dad both found themselves boyfriends, so I should know better than to expect everything to stay the same.

I lie down on the bed and text Jessie. It actually worked out really well for her, eventually. Her mum had moved to New York and now they’re all living there – her mum and her boyfriend, her dad and his boyfriend, and Jessie and her boyfriend, Finn. Not all together, obviously. But they’re all really happy. Much happier than when her parents were still married, Jessie says.

I tell Jessie to Skype me when she gets a chance and then I stare up at the enormous water stain on my bedroom ceiling. It looks a bit like America, if I squint.

I’m sitting up in bed with my knackered netbook on my knee. It usually crashes every few minutes, but for some reason it works fine with Skype.

Jessie laughs. ‘And how do you feel about it? Not keen?’

‘Not really, no. It’s just too much change, you know?’

‘I do, yeah. But, you know, you hate where you live and it could be a really good change. And if it doesn’t work out you can always come home…’

‘Yeah, I’ve been watching Ryan Gosling paparazzi videos on YouTube to try to convince myself.’

‘And if that doesn’t convince you, I don’t know what will,’ Jessie says, before adding, ‘“Hey, Girl…”’

I laugh. It’s from this Ryan Gosling Tumblr she sent me that we’re both obsessed with.

The Return of the Black Company by Cook, Glen
KnightForce Deuces by Sydney Addae
Our Now and Forever (Ardent Springs #2) by Terri Osburn
The Beast in the Red Forest by Sam Eastland
Tangled in Chains by SavaStorm Savage
A Dangerous Harbor by R.P. Dahlke
Animal Attraction by Tracy St. John
Troublemaker by Joseph Hansen
Bad Girl by Night by Lacey Alexander
Come into my Parlour by Dennis Wheatley
Our partner