Read Emperor of the Air Online

Emperor of the Air 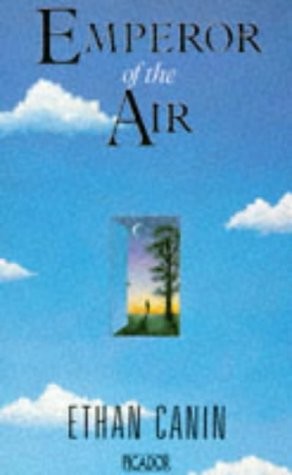 Emperor of the Air

The Year of Getting to Know Us

Where We Are Now

We Are Nighttime Travelers

The Carnival Dog, The Buyer of Diamonds

Some of the stories in this collection have appeared elsewhere, in slightly different form: “Emperor of the Air” in
The Atlantic
and
The Best American Short Stories
1985; “The Year of Getting to Know Us” and “Where We Are Now” in
The Atlantic;
“Lies” in
San Francisco Stories
and the
Boston Globe Magazine;
“We Are Nighttime Travelers” in
Esquire;
“Pitch Memory” in
Ploughshares;
“The Carnival Dog, the Buyer of Diamonds” (under the title “Abe, Between Rounds”) in
Redbook;
“Star Food” in
Chicago
and
The Best American Short Stories 1986.

The author is grateful for permission to quote lines from the following poems: “Everything That Acts Is Actual,” by Denise Levertov, in
Collected Earlier Poems, 1940–1960
. Copyright © 1957 by Denise Levertov Goodman. Reprinted by permission of New Directions Publishing Corporation. “These,” by William Carlos Williams, in
Collected Poems, Volume
I: 1909–1939. Copyright © 1938 by New Directions Publishing Corporation. “The Love Song of J. Alfred Prufrock,” by T. S. Eliot, in
Collected Poems
1909–1962, copyright © 1936 by Harcourt Brace Jovanovich, Inc.; copyright © 1963, 1964 by T. S. Eliot. Reprinted by permission of the publisher.

For my parents, and my brother, Aram, and for Barbara

The author is grateful to the Ingram Merrill Foundation, to James Michener and the Copernicus Society of America, and to the Henfield Foundation for support during the writing of this book.

EMPEROR OF THE AIR

L
ET ME TELL YOU
who I am. I’m sixty-nine years old, live in the same house I was raised in, and have been the high school biology and astronomy teacher in this town so long that I have taught the grandson of one of my former students. I wear my father’s wristwatch, which tells me it is past four-thirty in the morning, and though I have thought otherwise, I now think that hope is the essence of all good men.

My wife, Vera, and I have no children. This has enabled us to do a great many things in our lives: we have stood on the Great Wall of China, toured the Pyramid of Cheops, sunned in Lapland at midnight. Vera, who is near my age, is off on the Appalachian Trail. She has been gone two weeks and expects to be gone one more, on a trip on which a group of men and women, some of them half her age, are walking all the way through three states. Age, it seems, has left my wife alone. She ice-skates and hikes and will swim nude in a mountain lake. She does these things without me, however, for now my life has slowed. Last fall, as I pushed a lawnmower around our yard, I felt a squeezing in my chest and a burst of pain in my shoulder, and I spent a week in a semiprivate hospital room. A heart attack. Myocardial infarction, minor. I will no longer run for a train, and in my shirt pocket I keep a small vial of nitroglycerine pills. In slow supermarket lines or traffic snarls I tell myself that impatience is not worth dying over, and last week, as I stood at the window and watched my neighbor, Mr. Pike, cross the yard toward our front door carrying a chain saw, I told myself that he was nothing but a doomed and hopeless man.

I had found the insects in my elm a couple of days before, the slim red line running from the ground up the long trunk and vanishing into the lower boughs. I brought out a magnifying glass to examine them—their shiny arthroderms, torsos elongated like drops of red liquid; their tiny legs, jointed and wiry, climbing the fissured bark. The morning I found them, Mr. Pike came over from next door and stood on our porch. “There’s vermin in your elm,” he said.

“It’s a shame, but I’ll be frank: there’s other trees on this block. I’ve got my own three elms to think of.”

Mr. Pike is a builder, a thick and unpleasant man with whom I have rarely spoken. Though I had seen him at high school athletic events, the judgmental tilt to his jaw always suggested to me that he was merely watching for the players mistakes. He is short, with thick arms and a thick neck and a son, Kurt, in whose bellicose shouts I can already begin to hear the thickness of his father. Mr. Pike owns or partly owns a construction company that erected a line of low prefabricated houses on the outskirts of town, on a plot I remember from my youth as having been razed by fire. Once, a plumber who was working on our basement pipes told me that Mr. Pike was a poor craftsman, a man who valued money over quality. The plumber, a man my age who kept his tools in a wooden chest, shook his head when he told me that Mr. Pike used plastic pipes in the houses he had built. “They’ll last ten years,” the plumber told me. “Then the seams will go and the walls and ceilings will start to fill with water.” I myself had had little to do with Mr. Pike until he told me he wanted my elm cut down to protect the three saplings in his yard. Our houses are separated by a tall stand of rhododendron and ivy, so we don’t see each other’s private lives as most neighbors do. When we talked on the street, we spoke only about a football score or the incessant rain, and I had not been on his property since shortly after he moved in, when I had gone over to introduce myself and he had shown me the spot where, underneath his rolling back lawn, he planned to build a bomb shelter.

Last week he stood on my porch with the chain saw in his hands. “I’ve got young elms,” he said. “I can’t let them be infested.”

“My tree is over two hundred years old.”

“It’s a shame,” he said, showing me the saw, “but I’ll be frank. I just wanted you to know I could have it cut down as soon as you give the word.”

All week I had a hard time sleeping. I read Dickens in bed, heated cups of milk, but nothing worked. The elm was dying. Vera was gone, and I lay in bed thinking of the insects, of their miniature jaws carrying away heartwood. It was late summer, the nights were still warm, and sometimes I went outside in my nightclothes and looked up at the sky. I teach astronomy, as I have said, and though sometimes I try to see the stars as milky dots or pearls, they are forever arranged in my eye according to the astronomic charts. I stood by the elm and looked up at Ursa Minor and Lyra, at Cygnus and Corona Borealis. I went back inside, read, peeled an orange. I sat at the window and thought about the insects, and every morning at five a boy who had once taken my astronomy class rode by on his bicycle, whistling the national anthem, and threw the newspaper onto our porch.

Sometimes I heard them, chewing the heart of my splendid elm.

The day after I first found the insects I called a man at the tree nursery. He described them for me, the bodies like red droplets, the wiry legs; he told me their genus and species.

“Will they kill the tree?”

“Probably not,” he said. He told me that once they were visible outside the bark they had already invaded the tree too thoroughly for pesticide. “To kill them,” he said, “we would end up killing the tree.”

“Does that mean the tree is dead?”

“No,” he said. “It depends on the colony of insects. Sometimes they invade a tree but don’t kill it, don’t even weaken it. They eat the wood, but sometimes they eat it so slowly that the tree can replace it.”

When Mr. Pike came over the next day, I told him this. “You’re asking me to kill a two-hundred-and-fifty-year-old tree that otherwise wouldn’t die for a long time.”

“The tree’s over eighty feet tall,” he said.

“It stands fifty-two feet from my house.”

“I don’t want to be unpleasant,” he said, “but a storm could blow twenty-eight feet of that tree through the wall of my house.”

“How long have you lived in that house?”

He looked at me, picked at his tooth. “You know.”

“Four years,” I said. “I was living here when a czar ruled Russia. An elm grows one quarter inch in width each year, when it’s still growing. That tree is four feet thick, and it has yet to chip the paint on either your house or mine.”

We looked at each other for a moment. Then he averted his eyes, and with his right hand adjusted something on his watch. I looked at his wrist. The watch had a shiny metal band, with the hours, minutes, seconds, blinking in the display.

The next day he was back on my porch.

“We can plant another one,” he said.

“Do you have any idea how long it would take to grow a tree like that one?”

“You can buy trees half-grown. They bring them in on a truck and replant them.”

“Even a half-grown tree would take a century to reach the size of the elm. A century.”

He looked at me. Then he shrugged, turned around, and went back down the steps. I sat down in the open doorway. A century. What would be left of the earth in a century? I didn’t think I was a sentimental man, and I don’t weep at plays or movies, but certain moments have always been peculiarly moving for me, and the mention of a century was one. There have been others. Standing out of the way on a fall evening, as couples and families converge on the concert hall from the radiating footpaths, has always filled me with a longing, though I don’t know for what. I have taught the life of the simple hydra that is drawn, for no reasons it could ever understand, toward the bright surface of the water, and the spectacle of a thousand human beings organizing themselves into a single room to hear the quartets of Beethoven is as moving to me as birth or death. I feel the same way during the passage in an automobile across a cantilever span above the Mississippi, mother of rivers. These moments overwhelm me,’ and sitting on the porch that day as Mr. Pike retreated up the footpath, paused at the elm, and then went back into his house, I felt my life open up and present itself to me.

When he had gone back into his house I went out to the elm and studied the insects, which emerged from a spot in the grass and disappeared above my sight, in the lowest branches. Their line was dense and unbroken. I went inside and found yesterday’s newspaper, which I rolled up and brought back out. With it I slapped up and down the trunk until the line was in chaos. I slapped until the newspaper was wet and tearing; with my fingernails I squashed stragglers between the narrow crags of bark. I stamped the sod where they emerged, dug my shoe tip into their underground tunnels. When my breathing became painful, I stopped and sat on the ground. I closed my eyes until the pulse in my neck was calm, and I sat there, mildly triumphant, master at last. After a while I looked up again at the tree and found the line perfectly restored.