Read Empire of the East Online

Empire of the East 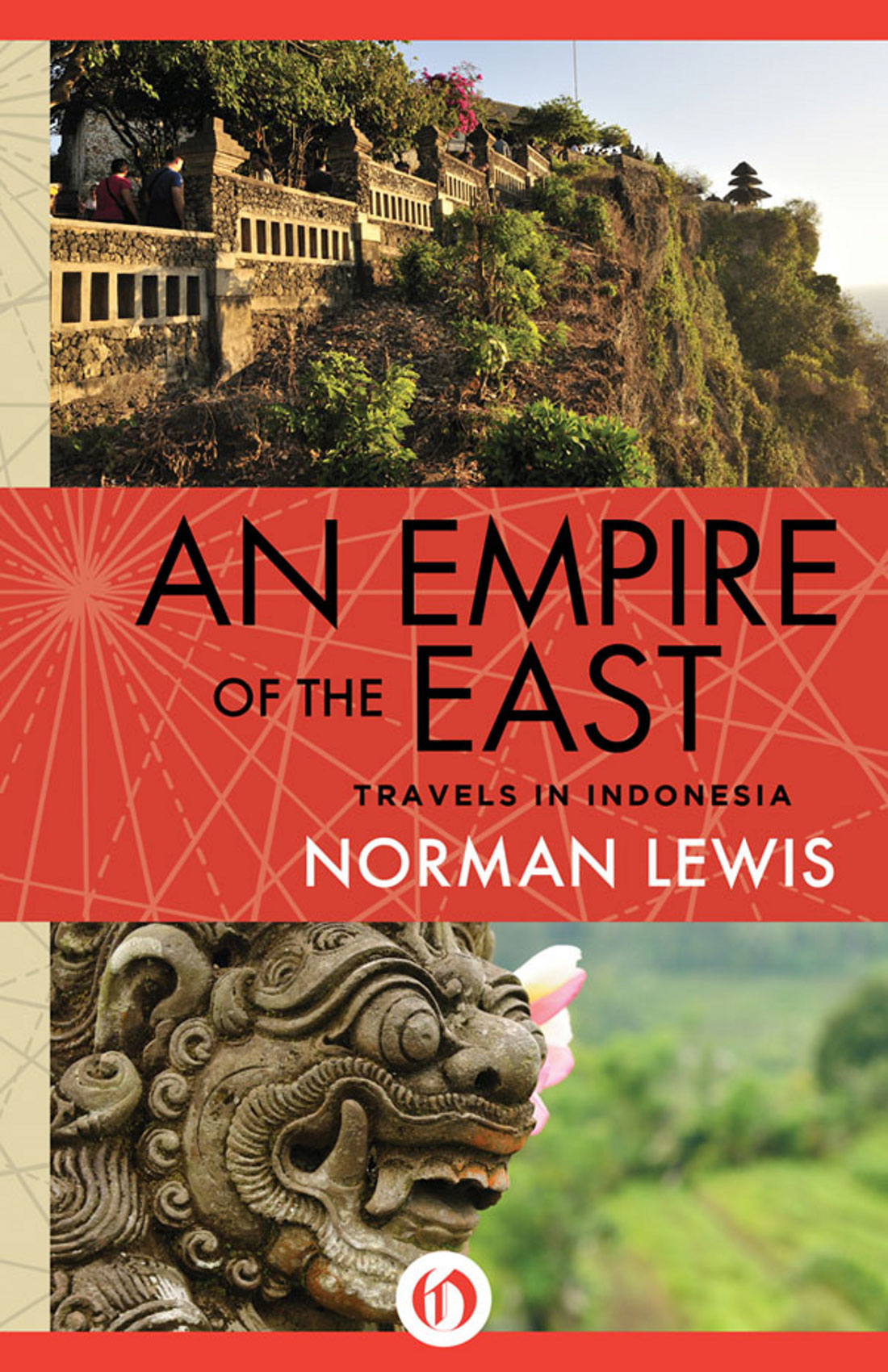 An Empire of the East
Travels in Indonesia
Norman Lewis

To Claudia and Gawaine, and also to Louis, reluctantly left behind on grounds of extreme youth

A Biography of Norman Lewis

I
NDONESIA IS SPREAD IN
a vast archipelago across three thousand miles of the southern seas. Its population, creeping towards two hundred million, is uniquely diverse in its composition of three hundred ethnic groups speaking some two hundred and fifty languages; each inhabited island possessing a different history and culture from the next. Eisenhower first conferred imperial status upon this island agglomeration when speaking of what he called ‘the rich empire of Indonesia’. He demanded that nothing should be allowed to interfere with its unification process, for ‘a strong Indonesia would provide the essential barrier to the spread of communism in the East’. Whether they liked it or not, the components of what had been until 1949 the Dutch East Indies were to be surrendered to Javanese rule. West Papua, promised self-determination, became Irian Jaya under the Indonesian flag. As late as 1975 the United States and Australia joined forces in the manoeuvres following which East Timor, a Portuguese colony, was invaded and occupied.

Both these takeovers have encountered local resistance protracted over many years, while an unending struggle conducted by the central power against the separatists in Aceh (Sumatra) has added to the hundreds of thousands of lives lost in insurgencies. While the absorption of West Papua into the empire was accepted by the world as a
fait accompli,
the United Nations has protested on numerous occasions against the illegal occupation of East Timor. In February 1983 a UN Commission on Human Rights expressed ‘deep concern over continuing human rights violations in the territory of East Timor’ and in the same month Amnesty International found that extra-judicial executions and disappearances have become a central part of the Indonesian government’s repertoire. The capture of the rebel leader Xanana Gusmao led in 1993 to his trial and sentence to life imprisonment. With that the Indonesian government declared that the eighteen-year resistance was at an end. Yet almost simultaneously British Aerospace announced a deal signed secretly for the supply of twenty-four Hawk combat jets to Indonesia — aircraft described in promotional literature as well suited to ground attack. The
Independent’s
headline on 11 June 1993 concluded that these ‘may be used on Timor rebels’.

Little of these unhappy events is likely to impinge in any way upon the experiences of the average Western visitor to the country. Indonesia aims to present itself above all as a democracy of the kind we understand, and at five-yearly intervals the nation goes into a paroxysm of excitement over elections which infallibly return Golkar, the President’s party, to power. Innovations in the electoral process have included Golkar’s advance notice of the overall majority it expects to get, which is always correct, and its choice of the leaders of the parties — destined to a crushing defeat — which will oppose it. Sometimes enthusiasm for President Suharto’s cause is carried to extreme lengths. Thus, in the 1987 election, called by the President the country’s ‘festival of democracy’, the island of Kalimantan is reported as having scored a possible world record turnout of 508% of the registered voters. ‘Once again,’ Suharto is said to have commented, ‘the nation has applauded the success of our policies.’

Despite the cultural attractions of Java and its bustling modern cities at the heart of the empire, many Western travellers will wander away in search of the graciousness of the East Indies of old. This in its gentle decline is most likely to be found in the outer islands where sheer distance has preserved it from our times. There are few places anywhere with reserves of human warmth and generosity to equal those of these island people of slender means and little ambition, although too often labelled by the government
suka terasing
(isolated and backward).

In all probability Indonesia can still offer the greatest variety of primitive scenes and entertainments of any country on earth. Upon these the State casts a cold entrepreneurial eye. The real test of acceptability is whether or not these lighthearted affairs can be detached from the life of the people and converted to marketable folklore for the benefit of the nascent tourist business. Tourism is seen as a major industry of the future but there is a lack of realism about the forms it is likely to assume. A few hundred square miles of the incomparable rainforest of Sumatra used to house more rare animals than all the zoos put together, and was surely the most precious of national assets. But the trees among which the animals hide are going even faster than those of Brazil, and soon there will be no trees and no animals.

‘So what comes next?’ I asked a man who had just turned a half-million acres of a forest in Aceh into cement sacks.

‘Personally I’ve nothing to worry about,’ he said. ‘The big money’s in tourism these days. From now on it’s golf courses. This is going to be the paradise of Japanese golfers.’

But can there really be enough golfers in Japan — or even the whole world — to fill this terrible gap?

I
N EARLY 1991 I E
mbarked on a series of journeys in Indonesia. The choice offered by an archipelago of thirteen thousand-odd islands is overwhelming, and a traveller setting out in youth, with the intention of leaving none unvisited, would find himself trapped in the bailiwick of old age before completing such an odyssey. Change in Indonesia is rapid and sometimes depressing. Today’s luxuriant forest is tomorrow’s bare hillside, and today’s mountain tomorrow’s copper mine. I was at pains to avoid areas that had succumbed to tourist influences, for mass tourism is the great destroyer of customs and cultures, and the purveyor of uniformity. There are astonishing resemblances between Spain’s Costa del Sol and Thailand’s Phuket.

For me the places holding the greatest interest were those that had withstood the standardizing processes of the Indonesian government, thus retaining an individualism that it was hard to believe could survive. Among those were Aceh in North Sumatra with a culture and history entirely separate from the Javanese one the government seeks to impose. East Timor was a former Portuguese colony which, having resisted an Indonesian takeover, had become the scene of this century’s most ferocious small war. In Irian Jaya Stone-Age Papuans continued to resist absorption into the national amalgam. Fresh news awaited the visitor to all of these destinations, but apart from their special interest, urgency was the spur.

That Aceh should have been chosen for the first of these peregrinations was largely fortuitous. My son Gawaine and his friend Robin — both refugees from the stresses of life in the City — were taking a six-month therapeutic break in South-east Asia, and now they suggested we join forces. At this time almost all the islands of Indonesia were plunged into the season of rains. Only North Sumatra, projecting well across the Equator, offered a climatic exception. Travel elsewhere in the archipelago could be difficult indeed, but Aceh was dry — offering the benefits of uncomplicated journeyings if, and when, compelled to leave the beaten track. Enthusiasm for the project was general. We would refresh ourselves with new simplicities, relax among village people, drink boiled water, eat rice flavoured with chillies, and travel among basketed chickens and parcelled-up piglets by village bus. And so we flew to Medan, capital of North Sumatra, where the practicalities were to be tackled.

A minimum of prosaic information would be required: we needed to supply ourselves with local maps, find out where buses went, decide on routes, enquire as to the availability of accommodation at the end of the journey, collect whatever schedules and timetables might exist. With this object in view, our first visit was to the office of NATRABU, the government tourist board, where we were questioned by a series of smart girls, recalling the air-hostesses whose melting sympathy and charm so frequently advertised a short while back on British television quite certainly contributed to the success of the national airline.

We explained that we hoped to travel by bus from Medan to Banda Aceh on the island’s northernmost tip, returning after various side-trips by the west coast. This part of the journey we expected to be by far the most interesting, for the road — much of it in poor condition — passed through what sounded like the least-visited part of the island, where the coastal villagers lost their animals to tigers coming down by night from the mountains. In the rainy season stretches of this route were impassable for weeks on end, and an oldish guide-book spoke of cars and buses having to be rafted across three of the rivers. Some difficulties had arisen here, we read, through problems of transmigration and the understandable resentment of Sumatrans to see newcomers, whom they considered as foreigners, settled on their land. Finally there were the reports of an insurrection in Aceh province by separatists, although little news of this was permitted to appear in the Indonesian press.

The three beautiful secretaries at NATRABU considered our project, expressing at first limited enthusiasm and encouragement and then the invasion by doubt, with the wonderfully subtle expressions and delicate finger gestures suggesting the genesis of a Balinese dance. Part of Indonesian protocol on such occasions prohibits the bringing of bad tidings — in this case conveyed in the use of the word impossible, either in Indonesian or English translation. ‘Sometimes difficulties are arising,’ said the spokeswoman, holding the telephone through which unsatisfactory news had been received as though she had just gathered a lotus. ‘Maybe there are buses to Langsa,’ she said. Langsa was seventy miles away up the easy east coast road.

‘We are waiting for answers to our questions. Soon we shall know. You see, perhaps today is bus, but tomorrow no. Maybe you are in Langsa and they say you this bus must go back. What will you do?’ In spite or because of the possible predicament, all three girls burst into laughter, trilling their merriment in a most musical fashion.

The office was the personification of the Orient of our day, glutted with electronic equipment among shining spaces. All the apparatus in sight seemed to have been designed to disguise its actual function. A TV set succeeded in looking like a jousting helmet, and a shutter like the door of Ali Baba’s cavern dropped over the computer in its wall niche when not in use. Of the past nothing remained but a small girl who kneeled to polish foot by foot the already gleaming floor.

The spokeswoman detached herself from her friends and glided back to where she had placed us under an air-conditioning vent which blew a breeze over us with the sound of distant prayer. ‘We could hire a car for you,’ she said.

‘What will you do, then? Walk?’ She went through a mime of an exhausted pedestrian dragging himself down the road under the sun. All the girls laughed happily again, and we did our best to show amusement too. Groaning, I dragged my hand across a sweat-soaked brow, and the effort to enter into the spirit of the joke delighted them. Amazingly, the highly developed Indonesian sense of humour is of the slapstick kind, running to false noses and Chaplinesque moustaches. ‘They like to look on the funny side of things,’ said a booklet on how to make friends and influence people in Indonesia. The author instanced the case of a friend who had scored a social success at a party by taking out his false teeth and holding them in his hands to snap convivially at fellow guests.