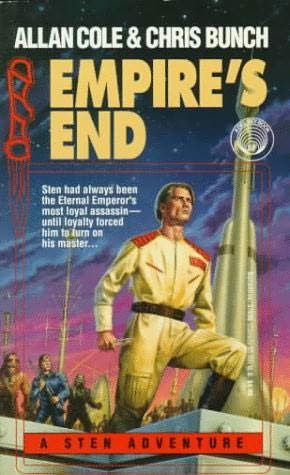 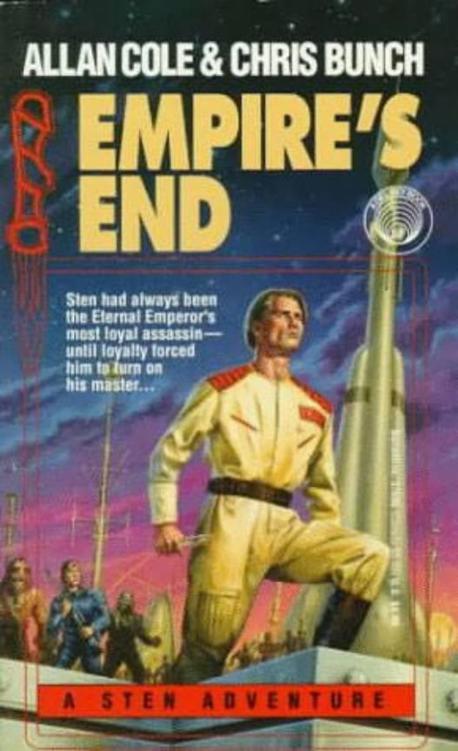 THE RUINS OF the Imperial assault fleet fled through the “dark” between star clusters. There was one tacship carrier, two heavy cruisers, one light, their destroyer flotilla screens, and, in the center of the formation, auxiliaries and the troop transports carrying the battle-shattered remnants of the First Imperial Guards Division.

Flanking and closing the formation was the huge battleship
Victory
.

On its bridge, Sten stared at a strategic battlescreen, not seeing either the glow “ahead” that represented the Empire… nor the symbols to the “rear” that were the anarchy-ripped Altaic Cluster.

Sten: Ambassador Plenipotentiary. Personal Emissary of the Eternal Emperor. Admiral. Medals and decorations beyond count, from the Galactic Cross down, including Grand Companion of the Emperor’s Household. Hero.

Among the symbols representing what was “behind” the
Victory
was one marking where the Imperial Battleship
Caligula
, its Admiral Mason, and over three thousand loyal Imperial sailors had been. They’d been slaughtered by Sten for following a direct order to planetbust the Altaic’s capital world, an order issued in person by the Eternal Emperor.

“GA.” Part of Sten’s mind, the part always removed from the hue and cry, found it funny both of them still used slang from their now-long-gone days in Mantis Section, the Emperor’s su-persecret covert-operations unit. Go ahead.

‘Thank you, Mister Kilgour. I’ll get my thumb out.“

Sten turned away from the screen. Around him, waiting, was the
Victory’s
bridgewatch. The top elements of his long-serving personal staff, who were in fact more Sten’s own private intelligence agency than striped-suiters.

Twenty-three Gurkhas—Nepalese mercenaries famous for serving only in the Emperor’s private bodyguard—but these had volunteered for special duties: guarding the life of their ex-CO, Sten.

Otho. Six other Bhor. Squat, shaggy monsters with long beards, yellow fangs, and ground-brushing knuckles. They seemed happiest either tearing an enemy in half the long way or else doing the same to his bank balance in a shrewd multiworld trade. They were also fond of eddaic-type poetry. There were another hundred of them elsewhere on the
Victory
.

And, most important, left to last, their commander:

Enough bean counting, he thought. Kilgour had been right: a wolf could never chance lying in a sunny clearing listening to the bees buzz—not unless he’d suddenly decided on a new career as a fireside rug.

“Sir?” The young woman was waiting. The lieutenant’s name, Sten recollected, was Renzi.

Sten remembered. “Both of you,” he said, raising his voice. “And anyone else interested—listen up.

‘Things have changed. I just declared war on the Emperor. Which makes me a traitor. Nobody’s required to obey my orders. No one who remains loyal to his oath will be harmed. We’ll—“

His words were interrupted by the ululation of the GQ siren as the weapons officer obeyed Sten’s first command.

That was one answer.

Freston made another: “Pardon, sir? There was some static there and I lost you. Your orders?”

Sten held up a palm for Freston to stand by.

“Weapons, I want all Kali and Goblin stations at full launch-readiness. Some of our Imperial friends might decide to bag a renegade. Plus there were four destroyers escorting the
Caligula
. If any ship begins an attack, put a Goblin in the vicinity and blow it off as a warning.”

“And if they keep coming?”

Sten hesitated. “If they do—contact me. No Kali launches will be made without my orders, and any launch will be controlled by either myself or Mister Kilgour.”

“Commander Freston. Patch me a secure link to General Sarsfield on whichever transport he’s riding.” Sarsfield was the Guards’ CO, and the next-ranking officer to Sten. Freston touched keys.

“One other thing,” Sten said. “You’ve been through C&S school?”

“You have any really terrible sins in your past? That’d keep you from being the very model of a shipcaptain? Ram the admiral’s barge? Shine the ship’s cannons with carbolic acid? Bootleg the beer? Badmouth the beef? Boast about buggery?”

“Fine. They tell me pirates get promoted a lot before they get hanged. The
Victory’s
your ship, Mister.”

“Don’t thank me. That just means you’ll probably be next after Kilgour for the high jump. Mister Kilgour?”

“All offwatch personnel to the main hangar.”

“Very well. In view of events, you are now the ranking officer of the fleet. Until you receive differing orders from the Empire, I would suggest you continue the present course toward the nearest Imperial worlds.

“I will advise you that, regretfully, any attempt to interfere with the
Victory
or its movements will be opposed with maximum force. However, none of your ships are in danger if they obey these instructions.”

The old soldier grimaced. He took a deep breath, and started to say something. Then he changed his mind.

“Your message is understood.”

The screen blanked. Sten wondered what Sarsfield had been about to say—that none of the Imperial ships had one-quarter the firepower of the
Victory
nor were they skippered by deathseekers? Or—and Sten cursed at himself for still having a bit of romance in him—Good luck? It didn’t matter.

‘Turn out your people. I want them as flanking security.“

“Commander—pardon, Captain Freston, have the captain’s personal boat ready for launch. We’ll steal you another one somewhere.” Interesting, Sten thought, how quickly one could lose that stifling straitjacket discipline the navy held so dear.

“Mister Kilgour? Shall we go draw the line with our saber and see if anybody’s in an Alamo kind of mood?”

Suddenly Sten remembered security. He had no idea what Alex was hesitating about—but Sten had recollected two trump cards of his own. If they still held value. He unsealed the front of his combat suit and lifted out the thin pouch that was hung on a tie around his neck. He removed two squares of plas.

“You people stand by,” he ordered.

Sten hurried across the bridge to the central computer station. He told the two operators to clear out of the cubicle, pulled a security screen around the station, and slid a keyboard out.

The station was one of the three on the
Victory
that could access ALL/UN—the central Imperial computer net that reached every Imperial command on every world and ship of the Empire.

Should
, Sten thought, rather than
could

Most likely the
Victory
had been cut out of any access to anything, just as the Eternal Emperor had cut Sten’s usual direct line into his quarters.

Weeks passed. Months. Decades. Sten knew his body could have been carbon-dated before the screen suddenly cleared and ALL/UN blinked at him, then vanished.

The next thing he would see would be the simulation of a stiffly extended human middle finger and STATION REJECTED.

Sten input the program on the first plas chip. Again, a wait, then, BORRUMBADA. Damn, he thought. They accepted it. Once again: ATELIER. The second chip was fed in. And again Imperial All Units accepted the program. Now we pray a lot, and hope both those little bastards work their magic.

The chips were a gift from Ian Mahoney, Sten’s former commander in Mantis, Fleet Admiral, and, for aeons, the closest thing the Eternal Emperor had for a friend. But Mahoney was dead now—accused of treason by the Emperor and executed.

It’s a great pity, Ian, Sten thought, you couldn’t come up with one of these for yourself—and deploy it before the Eternal Clot killed you. He caught himself. No time for that, either.

“Yessir, Mister Kilgour, sir. Out of the way, sir, right away, sir. Can I have someone send in tea, sir?”

Sten started for one of the slideways connecting the bridge to the battleship’s central transit tube and thence to the hangar near the stern. Without orders, the Gurkhas, willyguns at the port, were trotting behind him.

Cind and her Bhor were waiting at a junction. She motioned them, and the Gurkhas, to move on ahead.

For a moment, she and Sten were alone at the bend of a corridor.

“Thanks,” she said, and kissed him.

“But I never thought that you wouldn’t, I mean—”

“You’re right. I stay volunteered. Plus I never took any oath to any Emperor. Besides, I know how to pick a winner.”

Sten looked closely at her. She did not appear to be either making a joke or trying to build his morale.

“My ancestors were Jannissars,” she went on. “They served tyrants who hid behind the lie that they were the voice of a god they’d made up.

“I swore if I could become a soldier, I wouldn’t be like them. Matter of fact, the kind of soldiering I dreamed about was helping get rid of all those bastards like the Prophets. Or like Iskra. Or the Emperor.”

“Well,” Sten said, “you told me that before. And now I guess you’ll get your chance. Or at least a good shot at going down in noble flames.”

Sten stood on the winglet of a tacship, looking down at the nearly two thousand beings—those sailors of the
Victory
not absolutely required at weapons stations or to keep the ship alive, plus the remainder of his embassy staff—spread out around him.

He didn’t think he was doing a very good job of preaching tyrannicide. He tried not to look up at the hangar’s overhead catwalks where Bhor and Gurkha marksmen waited, in case someone planned any nonverbal objections.

“All right,” he finished. “That’s the situation. I shoved the Emperor’s face in it. There’s no way he can let me vanish and pretend nothing happened. Which I’m not going to do anyway.

“I won’t say what comes next. Because I don’t think any of you should volunteer to remain with me. If there’s anybody down there who’s good at running progs or who stayed awake in battle analysis, it’s easy to come up with a prediction.

“I’ve got the
Victory
, and maybe some beings somewhere who believe the same as I do. Which is, that it’s time to fight back. This, I plan to do.

“I’ve been serving the Emperor for most of my life. But things have gone nuts. Like the Altaics, for instance. All right, those poor beings were blood-crazed. And have been so for generations.