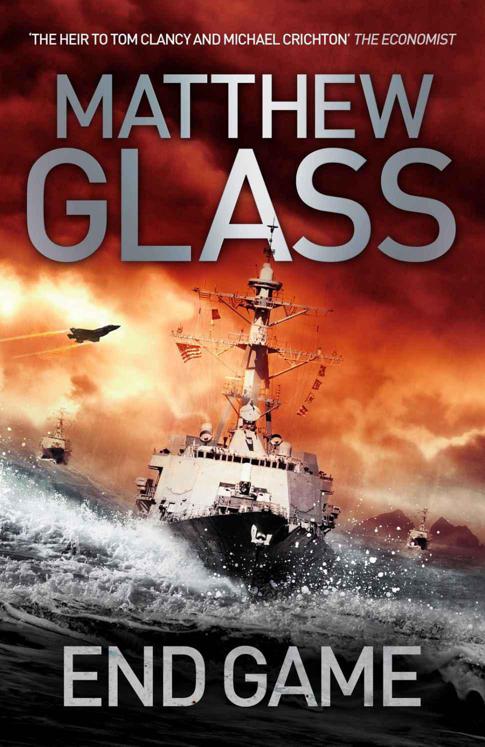 218 people are massacred when the Lord’s Resistance Army attack an undefended hospital. Amongst the dead are 32 American medical volunteers.

The US announces its plan to eradicate the Lord’s Resistance Army once and for all. But it will mean military intervention in China’s African sphere of influence. The message from the Chinese is keep out.

Stock prices tumble as a wave of uncertainty sweeps US markets. Memories of the collapse a decade ago are still fresh, and Washington is prepared to do what it takes to prop up America’s banks. But the government’s concern is that this time the turmoil is orchestrated. That someone is deliberately undermining the US markets.

Three unrelated incidents, or the opening moves in a much larger confrontation between two superpowers?

With hawks and hardliners on both sides keen to provoke conflict, the crisis escalates inexorably. US ambassador Marion Ellman must defuse the situation before it is to late. She knows that the first shot fired will have catastrophic consequences, but with American and Chinese carrier groups massing off the Horn of Africa, her time is running out…

Will the world’s two superpowers pull back from the brink, or is this the end game?

Matthew Glass
remains anonymous – though many people who have read his books have speculated that he might be an insider who cannot reveal his true name. The critically acclaimed
Ultimatum
, his first novel, was published by Atlantic Books in 2009. He lives somewhere in the UK.
End Game
is his second novel.

First published in the UK in 2011 by Corvus,
an imprint of Atlantic Books Ltd.

The moral right of Matthew Glass to be identified as the author of this work has been asserted in accordance with the Copyright, Designs and Patents Act of 1988.

This is a work of fiction. All characters, organizations, and events portrayed in this novel are either products of the author’s imagination or are used fictitiously.

PEOPLE BEGAN ARRIVING
at daybreak. They came along the dirt roads and tracks leading into the town, some on foot, some in brightly painted trucks that bounced in and out of potholes, bringing the products of the local countryside, maize, chillies, sweet potato, okra, tomatoes, onions, gourds. They spread their wares on rugs in the marketplace. Business began, as it did every Thursday. A group of policemen stood by, lazily leaning on their rifles and exchanging remarks with the traders. The colonial-era shopfronts around the market were faded and peeling, bearing handwritten signs. The Bamugisa Barber Shop. Honest Brothers General Store. The shopkeepers waited in the doorways and bantered with the country people, enticing them inside.

By four o’clock it was over. The market emptied. The people who had come into the town made their way back into the countryside. The shopkeepers watched them go.

Night fell. The bare red dirt of the streets turned inky black. Lights glowed for a while in the shops and then went out.

And then they came. Out of the scrub north of the town. Twenty-five, maybe thirty. They wore green fatigues. Some were tall, lean, in their late teens or twenties. Others were children. They carried machetes and rough wooden clubs. The older ones had Kalashnikovs.

In the Masindi Hotel, a colonial building dating from the 1920s, a few westerners were drinking in the bar. The town had nothing much of interest for tourists. Travellers who stopped in Masindi were usually on their way to the Murchison Falls, sixty miles to the northwest, or on their way back. A couple of the drinkers were aid workers from the town’s hospital, where an American medical charity, Health for All, supplemented the government service.

But the hotel wasn’t the objective of the group that had come in from the bush, and they slipped silently past it, hugging the shadows and ignoring the lights and the sound of voices from the bar. One of them knew the town and was leading the others. They used the darkest streets, avoiding the police station. They streamed through the empty market and past the shops, now shuttered, that surrounded it. Finally they stopped.

Further along the street a naked bulb hung at the entrance to the hospital compound. Inside the fence, a row of long, barracks-like wards stood in the darkness. Beyond the wards were the living quarters of the foreign staff.

The leaders of the group exchanged words. One of them went up the street and looked and came back. There was no sign of a guard at the gate. More words were exchanged. Then the adults amongst them grabbed hold of the children, in case they should try to back off, and they moved up the street and went in.

The killing began with machetes and clubs. The screams of the patients woke the four guards who were asleep in their shack in the compound. They had pistols. Gunfire broke out. Twenty minutes later a group of police arrived in an open-top vehicle and were mown down by two of the attackers who had been left at the gate, while behind them the frenzy of killing in the compound continued. Soldiers from the regional army barracks joined the assault. They stormed the entrance, losing a number of their men in the street. Inside, they had to fight for the hospital ward by ward. Then they had to fight for the grounds. It wasn’t until dawn that they took back control.

The light of morning revealed the death toll. Two hundred and eighteen bodies were found in the hospital, the living quarters and the grounds. Most had been clubbed or hacked to death. At least as many again were injured. Six attackers were taken alive with wounds of varying severity.

Word of the massacre was already being fed to the world over mobile phone. News outlets around the globe carried interviews with confused tourists who had awoken to the sound of gunfire from across the town. The district’s civil governor made a statement that admitted an incident had taken place but gave no details. In the army infirmary, the captured attackers were being interrogated. Lying on bloodstained stretchers, they claimed to be fighters of the Lord’s Resistance Army, making no attempt to hide their identities. The district military commander was skeptical. LRA activity had been subdued over recent months, and the group had never struck so far from the heartland of its insurgency in the far north of the country. Masindi was over a hundred miles from the jungle borderlands of Uganda, Congo and Sudan where the LRA had waged a thirty-year war of terror. It had always been safe from such attacks.

Yet the injured prisoners persisted in their story, even when their interrogators used blows to try to beat an alternative version out of them. They seemed to want to be sure the authorities knew. And the killing method and the presence of children amongst the attackers were consistent with the practices of the LRA. It seemed that the LRA had chosen to strike the town as a way of sending a message to the government that it was still in business, more dangerous than ever.

Over the next day, the bodies were identified. Of the dead, one hundred and seventeen were patients, fifty-nine were hospital staff, twenty-four were police and soldiers, and eighteen were the corpses of attackers.

Amongst the fifty-nine dead staff, thirty-two were citizens of the United States.

HE OPENED THE
file. It wasn’t the first time he had looked at it. He glanced down the lines of the first page, a summary of the known sequence of events. The following two pages were intelligence background on the LRA and the regional political situation. The next page was an outline of possible options for response from his national security advisor. After that were pictures and short biographies of each of the dead Americans, four to a page. There were eight pages of them. Another three had died of their wounds since the file had been prepared, and a number of others were in critical condition.

The Harder He Falls: 2 (So Inked) by Bristol, Sidney
Bestial by Carl, William D.
Servant of a Dark God by John Brown
Untamable by Berengaria Brown
The Luminaries by Eleanor Catton
Night Moves by Thea Devine
Aretes de Esparta by Lluís Prats
Following Flora by Natasha Farrant
The Hipster From Outer Space (The Hipster Trilogy Book 1) by Luke Kondor
The Mark (Interracial Paranormal Romance) (Toil and Trouble) by Cole, Charisma
Our partner