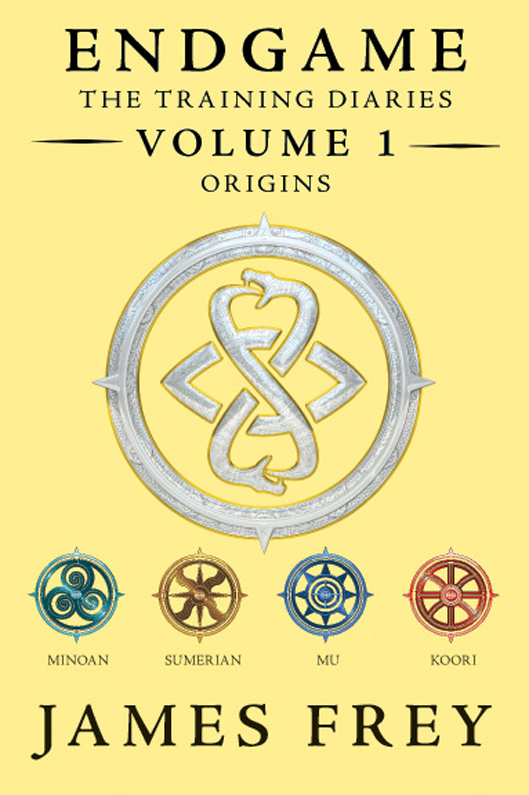 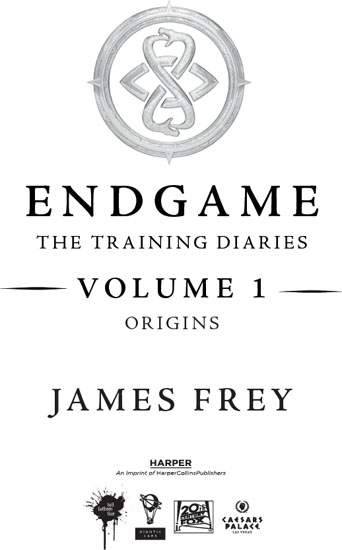 Excerpt from
Endgame: The Calling

Books in the Endgame Series

Twelve thousand years ago, they came. They descended from the sky amid smoke and fire, and created humanity and gave us rules to live by. They needed gold and they built our earliest civilizations to mine it for them. When they had what they needed, they left. But before they left, they told us that someday they would come back, and that when they did, a game would be played. A game that would determine our future.

For 10,000 years the lines have existed in secret. The 12 original lines of humanity. Each has to have a Player prepared at all times. A Player becomes eligible at 13 and ages out at 19. Each bloodline has its own measure of who is worthy to be chosen. Who is worthy of saving their people. They have trained generation after generation after generation in weapons, languages, history, tactics, disguise, assassination. Together the Players are everything: strong, kind, ruthless, loyal, smart, stupid, ugly, lustful, mean, fickle, beautiful, calculating, lazy, exuberant, weak. They are good and evil. Like you. Like all.

When the game starts, the Players will have to find three keys. The keys are somewhere on Earth. The only rule is that there are no rules. Whoever finds the keys first wins the game.

These are the stories of the Players before they were chosen—of how they shed their normal lives and transformed into the Players they were meant to be.

These are the Training Diaries.

When Marcus was a little kid, they called him the Monkey.

This was meant to be a compliment. Which is exactly how Marcus took it.

At seven years old, he monkeyed his way 30 meters up a climbing wall without fear, the only kid to ring the bell at the top. Ever since then he’s made sure he always goes higher than the other kids, always gets to the top faster. Always waits at the summit with a cocky grin and a “What took you so long?”

He can climb anything. Trees, mountains, active volcanoes, a 90-degree granite incline or the sheer wall of a Tokyo skyscraper. The Asterousia Mountains of Crete were his childhood playground. He’s scrambled up all Seven Summits—the highest mountain on each continent—including Antarctica’s Mount Vinson, which meant a hike across the South Pole. He’s illegally scaled Dubai’s 800-meter-high Burj Khalifa without rope or harness, then BASE jumped from its silver tip. He’s the youngest person ever to summit Everest (not that the world is allowed to know it).

If only someone would get around to building a tall enough ladder, he’s pretty sure he could climb to the moon.

Climbing is an integral part of his training. Every Minoan child hoping to be named his or her generation’s Player learns to scale a peak. They’ve all logged hours defying gravity; they’ve all broken through the clouds. But Marcus knows that for the others, climbing is just one more skill to master, one more challenge to stare down. No different
from sharpshooting or deep-sea diving or explosives disposal. For Marcus, it’s more.

For Marcus, climbing is everything.

It’s a fusion of mind and matter, the perfect way to channel all that frenetic energy that has him bouncing off the walls most of the time. It takes absolute focus, brute force, and a fearless confidence that comes naturally to Marcus, who feels most alive at 1,000 meters, looking down.

He loves it for all those reasons, sure—but mostly he loves it because he’s the best.

And because being the best, by definition, means being better than Alexander.

It was clear from day one that Alexander Nicolaides was the kid to beat. It took only one day more to figure out he was also the kid to hate.

Marcus’s parents called it camp, when they dropped him off that first day. But he was a smart kid, smart enough to wonder: What kind of parents dump their seven-year-old on Crete and head back to Istanbul without him? What kind of camp lets them do it?

What kind of camp teaches that seven-year-old how to shoot?

And how to arm live explosives?

And how to read Chinese?

It was the kind of camp where little kids were
encouraged
to play with matches.

It was most definitely Marcus’s kind of place—and that was even before he found out the part about the alien invasion and how, if he played his cards right, he’d get to save the world.

Or it would have been, were it not for the impossible-to-ignore existence of Alexander Nicolaides. He was everything Marcus wasn’t. Marcus could never sit still, always acted without thinking; Alexander was calm and deliberate and even broke the camp’s meditation record,
sitting silent and motionless and staring into a stupid candle for 28 hours straight. Marcus mastered languages and higher math with brute mental force, thudding his head against the logic problems until they broke; Alexander was fluent in Assyrian, Sumerian, ancient Greek, and, just for fun, medieval Icelandic, and he was capable of visualizing at least six dimensions. Marcus was better at climbing and shooting; Alexander had the edge in navigation and survival skills. They even
looked
like polar opposites: Alexander was a compact ball of tightly coiled energy, his wavy, white-blond hair nearly as pale as his skin, his eyes as blue as the Aegean Sea. Marcus was long-limbed and rangy, with close-cropped black hair. If they’d been ancient gods, Alexander would have had charge over the sky and the sea, all those peaceful stretches of cerulean and aquamarine. Marcus, with his dark green eyes and golden sheen, would have lorded it over the forests and the earth, all leaves and loam and living things. But the gods were long dead—or at least departed for the stars—and instead Marcus and Alexander jockeyed for rule over the same small domain. Marcus was the camp joker and prided himself on making even his sternest teachers laugh; Alexander was terse, serious, rarely speaking unless he had something important to say.

Which was for the best, because his voice was so nails-on-chalkboard annoying that it made Marcus want to punch him in the mouth.

It didn’t help that Alexander was a good candidate for Player and an even better suck-up. The other kids definitely preferred Marcus, but Marcus knew that Alexander had a slight edge with the counselors, and it was their opinion that counted. Every seven years, the counselors invited a new crop of kids to the camp, the best and brightest of the Minoan line. The counselors trained them, judged them, pushed them to their limits, pitted them against one another and themselves, and eventually named a single one as the best. The Player. Everyone else got sent back home to their mind-numbingly normal lives.

Maybe that kind of boring life was okay for other kids.

Other kids dreamed of being astronauts, race-car drivers, rock stars—not Marcus. Since the day he found out about Endgame, Marcus had only one dream: to win it.

Nothing was going to get in his way.

Tucked away in a secluded valley on the western edge of Crete, the Minoan camp was well hidden from prying eyes. The Greek isles were crowded with architectural ruins, most of them littered with regulations, tourists, and discarded cigarette butts. Few knew of the ruins nestled at the heart of the Lefka Ori range, where 50 carefully chosen Minoan children lived among the remnants of a vanished civilization. Tilting pillars, crumbling walls, the fading remains of a holy fresco—everywhere Marcus looked, there was evidence of a nobler time gone by. This was no museum: it was a living bond between present and past. The kids were encouraged to press their palms to crumbling stone, to trace carvings of heroes and bulls, to dig for artifacts buried thousands of years before. This was the sacred ground of their ancestors, and as candidates to be the Minoans’ champion, they were entitled to claim it for their own.

The camp imposed a rigorous training schedule on the children, but none of them complained. They’d been chosen because they were the kind of kids who thought training was fun. They were kids who wanted to win. None more than Marcus. And other than the thorn in his side named Alexander Nicolaides, Marcus had never been so happy in his life.

He endured Alexander for two years, biding his time, waiting for the other boy to reveal his weakness or, better yet, to flame out. He waited for the opportunity to triumph over Alexander so definitively, so absolutely, that everyone would know, once and for all, that Marcus was the best. Marcus liked to imagine how that day would go, how the other kids would carry him around on their shoulders, cheering his name, while Alexander slunk away in humiliated defeat.

He was nine years old when the moment finally arrived.

A tournament, elimination style, with the champion claiming a large gold trophy, a month’s worth of extra dessert, and bonus bragging rights. The Theseus Cup was held every two years as a showcase for campers—and a chance for them to prove their worth. There were rumors that the first to win the Theseus Cup was a shoo-in to be chosen as the Player. No one knew whether or not this was the case—but Marcus didn’t intend to risk it. He intended to win.

He swept his opening matches effortlessly, knocking one kid after another senseless, even the ones who were older and bigger. Bronze daggers, double axes, Turkish sabers—whatever the weapon, Marcus wielded it like a champion. Alexander, who’d started off in another bracket, cut a similar swath across the competition. This was as it should be, Marcus thought. It would be no fun to knock him out in an early round. The decisive blow needed to come when it counted, in the championship, with everyone watching.

The two nine-year-old finalists stepped into the ring for a final bout. Personal, hand-to-hand combat. No weapons, no intermediaries. Just the two of them. Finally.

They faced each other and bowed, as they’d been taught.

Bowing before you fought, offering up that token of respect, that was a rule.

After that, there were no rules.

Marcus opened with a karate kick. Alexander blocked it with ease, and they pitted their black belts against each other for a few seconds before Alexander took him in a judo hold and flipped him to the ground. Marcus allowed it—only so he could sweep his leg across Alexander’s knees and drop him close enough for a choke hold. Alexander wriggled out and smashed a fist toward Marcus’s face. Marcus rolled away just in time, and the punch came down hard against the mat.

The camp was on its feet, cheering, screaming Marcus’s and Alexander’s names—Marcus tried not to distract himself by trying to figure out whose cheering section was bigger. The fighters moved
fluidly through techniques, meeting sanshou with savate, blocking a tae kwon do attack with an onslaught of aikido, their polished choreography disintegrating into the furious desperation of a street brawl. But even spitting and clawing like a pair of animals, they were perfectly matched.