Read enemies of the state Online

enemies of the state 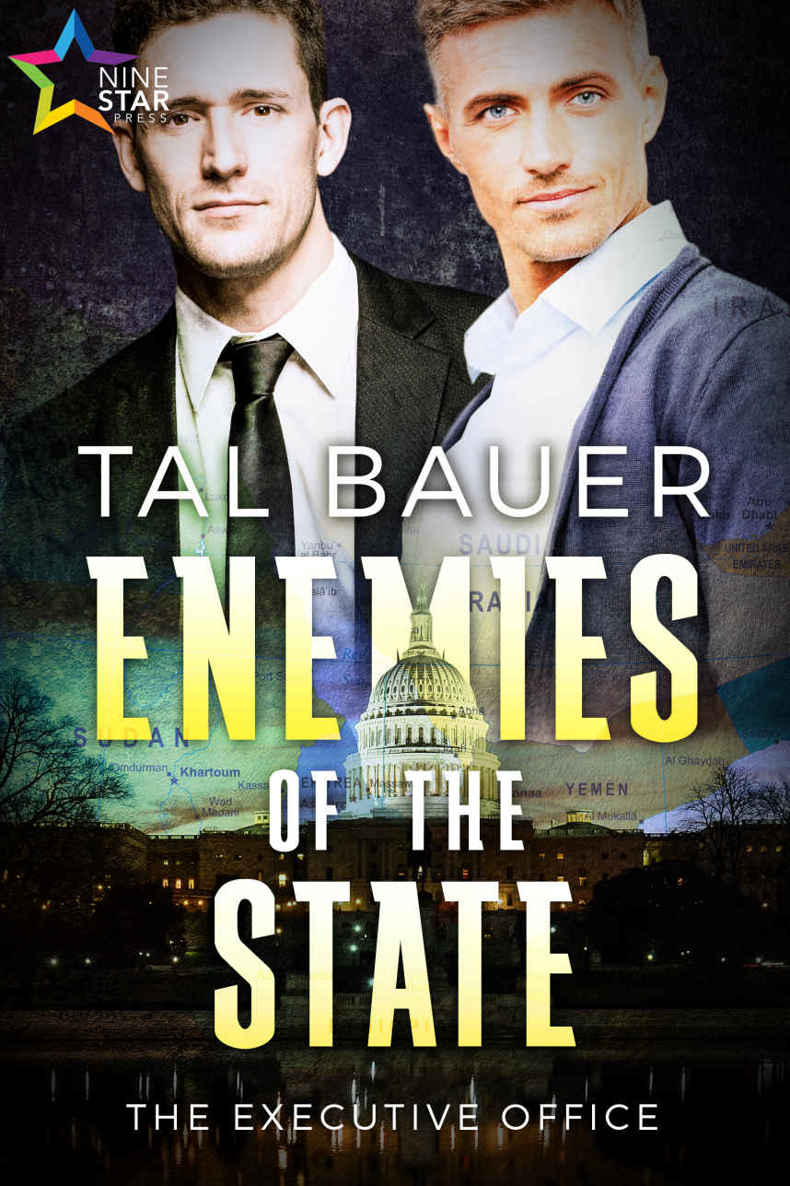 ENEMIES OF THE STATE

Enemies of the State

All rights reserved. No part of this publication may be reproduced in any material form, whether by printing, photocopying, scanning or otherwise without the written permission of the publisher, NineStar Press, Ltd.

Warning:
This book contains sexually explicit content which is only suitable for mature readers.

ENEMIES OF THE STATE

To all the survivors and victims of terror attacks, everywhere in the world.

Early morning in Washington, DC, was the time for ghosts, especially in winter.

Fog shrouded the city, encasing the capital in a fragile stillness. Darkness clung like damp silk. Bare branches littered with icicles jutted across roadways, skeletal and scratching against the night. Few cars moved through the city, drivers staying away from the slick streets.

One lone SUV crunched across the snow, briefly skidded out, and came to a stop outside the National Mall.

General Porter Madigan, Vice Chairman of the Joint Chiefs of Staff, waited behind the Lincoln Memorial. Across the Potomac, Arlington National Cemetery seemed to gleam, white headstones catching and holding tight to the fractional light filtering through the fog-drenched city. It was faint, but the glow was just enough to touch the general’s soul. So many fallen. So many who had sacrificed to bring the world along to this place. He could feel the ghosts of the dead hovering in the mist, pressing in on him.

He wouldn’t end up frozen in the ground, forgotten by everyone, save for one day of the year. He wouldn’t go out like that.

The sound of snow beneath boots, coming up on the right from the Korean War Memorial, had him walking to the memorial's main plaza. He could still feel the presence, the heavy, weighty presence, of Arlington lingering on his spine.

“General.” His visitor nodded, striding across the memorial's plaza until he was standing behind one of the massive colonnades, hidden from view. Hands shoved in his pockets, his visitor tucked his face into the upturned collar of his parka.

A hard glare. “You know I spent too much time in the sandbox. Anything below eighty and I freeze.”

Madigan shifted back to his stern professionalism. “Did you make contact with Al-Karim?”

“Yeah.” His visitor nodded into his parka. “This morning, Karim’s local time.” The middle of the night in DC.

“And is he back on track with the plan?” Madigan’s voice ground over his syllables, almost growling.

“Does he need to be reminded again of his place in the universe?
My
universe?”

A shake of his visitor’s head, though it could have been a shiver. “I don’t believe so, sir. Our last drone strike took out one of the refineries he and his forces controlled. He wasn’t pleased.”

“I’m not pleased when he thinks he’s got free reign to do as he pleases in
my
Middle East. I didn’t raise this goat-fucker up out of Abu Gharib to be his own man. I pulled him out of that shit so he could be
my
man.” Al-Karim left Abu Gharib one sunny day in Baghdad, thrown from the back of a pickup truck into the desert. A year later, he emerged in Libya, recruiting fighters for his jihadist rebellion against Libya’s government. When Libya fell, Al-Karim reemerged in Syria, recruiting Syrian rebel factions into his jihadist movement. The years rolled on, and Al-Karim moved up in the ranks, commanding one wing of the surging Islamic Caliphate. Al-Karim had personally led the Islamic Caliphate’s attack on Tikrit, capturing the former home of Saddam Hussein. He’d dispatched Islamic Caliphate soldiers on other global operations, all under the general’s explicit orders. Occasionally, though, Al-Karim had to be reminded who kept him alive. “His orders come from
me
.”

“Good.” Madigan studied his visitor. “We’re ready to begin the final phase. Are you good to go?”

“Yes, sir.” No hesitation. No wavering. If there was anyone who could have wavered, or could have been the weak link, Madigan had always suspected it would be him. The kid nurtured a level of hero worship toward Madigan over the years, but he’d worried that could cool, or transfer to someone else. Apparently, his worry hadn’t been necessary. He should have had more faith in the kid. He’d personally recruited him, after all, plucking him out of his assignment in Iraq and dropping him into his command. Twenty years, and even though the kid now wore civilian clothes and didn’t officially work for the Army anymore, he still reported straight to General Madigan.

“Excellent. Deliver the orders for our shipment through Turkey. Target the delivery for T-minus six months.”

“Yes, sir.” The kid was shivering again, wrapped in his parka. It almost made him want to ruffle his hair. Though, it wasn’t quite fair to call him a kid, not when he was pushing his forties. He was still a kid to the general’s mid-sixties, though. He always would be that baby-faced soldier lost and scared in the backwater of Baghdad, filled with unrecognized potential.

“Get out of here.” Madigan waved him away. “Go home. Get some rest. You’re going to need it.” He tried to grin, but humor had long since fled his life, and instead, he barely managed a sly curve of his mouth, toothy and lined with lips chapped from the cold. “The biggest job of your career starts in three weeks.”

President-elect Jack Spiers flew to Austin, Texas, Christmas morning in order to spend the holiday in his home state before traveling back to Washington, DC, for the New Year and his new job. Sticking with tradition, President-elect Spiers plans to spend the holiday in his Austin loft, where he has said he enjoys hearing the vibrancy of life surrounding him in Texas’s capital. After the holiday, President-elect Spiers returns to Washington, where he will gather his team and continue preparing to take charge of the Oval Office and the presidency of the United States.

Austin, Texas, wasn’t as frigid as Washington, DC, at Christmastime, but it still had a bite to the night air. Cold wind snaked around Ethan Reichenbach as he stood on President-elect Jack Spiers’s balcony overlooking Austin’s downtown at the intersection of 6th and Congress. Sixth Street, Austin: a vibrant, garish strip of bars, music lounges, pool halls, and tattoo parlors that thrummed, pulsing with the laughs and shouts of college students hitting the town, locals getting down with the grooves, and hustlers hawking their wares. Christmas Day, and the parties still raged.

And the girls still wear the skimpiest things.
Ethan shook his head, eyeing the long lines of smooth leg stretching down from miniskirts and sequined cocktail dresses. He’d never understand women. Instead, his eyes drifted to a group of men, college age by the looks of their clothes and lack of fashion sense. Faded jeans, T-shirts and flannel overcoats, and loose beanies crammed on their heads. Some smoked, others stood with their hands in their pockets, bouncing from foot to foot to try to stay warm. Smiling, Ethan’s memories came out for a stroll. He’d been young like that once. What was it, twenty years ago? He’d turned twenty-one and had been taken out to downtown Fayetteville, North Carolina, to get ripped, and—for the first time—did not have to hide in the trunk when he and the rest of the guys drove back onto base. Fort Bragg’s Military Police loved to bust underage drinkers, and he’d spent countless weekends crammed in the trunk, hugging the spare tire and Corporal Lawson’s trunk crap as he was ferried in and out of the base.

Ancient history. Ethan sucked in a deep breath, letting the cold fill his lungs. Texas’s capitol dome caught his eye, glowing in the capitol’s perpetual illumination. The Texas flag proudly flapped in the night sky, beneath the American flag.

Here we go again
. Another president, another four—or eight, if Spiers could crack the steely wariness of the American electorate—years.

After twelve years, he was a veteran of the Secret Service. Ten years into his Army career, he’d needed a change. It was too stifling, having to hide himself all the time, or remember to change pronouns, or make up excuses for why he didn’t want the guys to hang out with him when he needed to go out and pull, just get lucky and find some guy to screw all night long. The federal government was so much more lenient than the military, and he’d applied to every agency he could, all of the alphabet soup agencies and administrations there were, and a few he hadn’t known existed. The United States Secret Service called him back first.

Twelve years and three presidents later, Ethan was the new senior agent in charge of President-elect Spiers’s protection detail. HQ put him with Spiers’s campaign when it became more and more obvious that the Senator from Texas was set to win the general election. Another one-term president, the third in a row, was bumped from office in another display of the American public’s disgust of Washington, DC. Unease hung in the air in the nation’s capital, as if everyone in office had a timer on their back, ready to pop, or a hook just out of sight, waiting to pull them off stage.

Presidents came and went. For Ethan, Spiers was just another protectee. Just another job. Spiers was a promotion, a new face and new routines, but nothing more. The Secret Service didn’t get involved with their assignments. They never got attached, or friendly, or missed a president when he was voted out of office. They were invisible, silent sentinels standing their watch.

Behind Ethan, the glass door to the balcony slid open. President-elect Jack Spiers poked his head out.

Frowning, Ethan turned around. Why was the president-elect zipped up in his jacket, and why were his shoes on? He was supposed to be reading briefs in front of the fireplace, where Ethan had left him, feet up and a glass of whiskey in a tumbler at his hand. “Sir?”

“Hey, I’m going to pop on down to 6th Street and mingle a bit.” The president-elect nodded, as if that was that, and made to close the door.

Ethan grabbed the frame, stopping him. “Sir, no, you’re not.”

The president-elect pulled a face. “Look, this is my home state. This is my
home
, in fact. I’ve gone down to 6th Street every holiday. It’s a tradition. I mingle with the people, we share stories, I listen to their concerns, and we all have a great time. I can’t stop now.”

“Sir, it’s not possible for you to go down into the crowds. No one has been vetted. The crowd hasn’t been monitored. We haven’t secured any of the locations on the street. It isn’t a safe location for you, Mr. President-elect.”