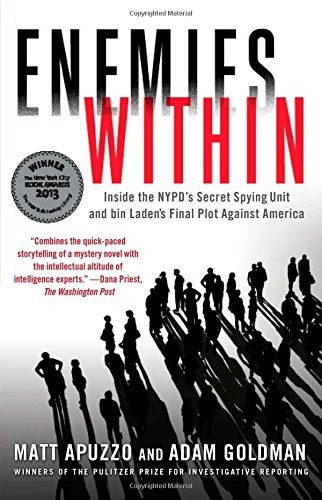 Thank you for downloading this Touchstone eBook. 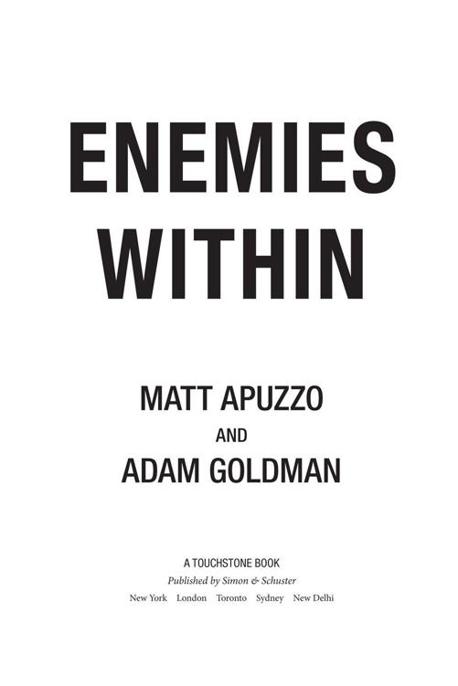 ONE
The Marriage Is Ready

TWO
A Spy in New York

TEN
In the Wind

About Matt Apuzzo and Adam Goldman

To our wives. Without you, nothing is possible.

Beware of the words
internal security
, for they are the eternal cry of the oppressor.

The bomber handled the chemicals carefully, just as they’d taught him. No need to rush anything and blow off his hand, or worse. A few years earlier, a curious college student in Texas had tried the same thing in his kitchen. A 911 dispatcher listened to him die howling, begging for help as flames engulfed his body.

Mix hydrogen peroxide and acetone, and nothing happens. The chemicals swirl around next to each other. In the presence of acid, though, they form the basis for a powerful explosion. The bomber’s acid of choice was muriatic acid, which he bought at a Lowe’s. Muriatic acid is used to treat swimming pools and clean concrete. But when it’s poured slowly into a mixture of hydrogen peroxide and acetone, clumps of white crystals appear. It looks like sugar, but it is as explosive as it is unstable.

The bomber used the Homestead Studio Suites kitchenette as his lab. He’d tried working in his aunt’s garage, but when she saw all the chemicals, she and her husband got suspicious and made him pour them down the drain. Nobody would bother him here. Unable to pay their rent, many residents had recently been kicked out of their apartments. Cats slept in windows. Children played in the parking lot alongside cars packed with furniture and clothes.

Forty dollars cash for a night in room 207. The bedspread was rough, and only the whir of the refrigerator drowned out the pulse of the highway. But he was not there to rest. He chose the motel because of its kitchen. It was a simple setup: builder-grade cabinets, a dingy white laminate countertop, and, most importantly, a stainless-steel, two-burner electric stove.

He had everything he needed. For weeks he’d been visiting beauty supply stores, filling his carts with hydrogen peroxide and nail polish remover. At the Beauty Supply Warehouse, among the rows of wigs, braids, and extensions, the manager knew him as Jerry. He said his girlfriend owned hair salons. There was no reason to doubt him.

On pharmacy shelves, in the little brown plastic bottles, hydrogen peroxide is a disinfectant, a sting-free way to clean scrapes. Beauty salons use a more concentrated version to bleach hair or activate hair dyes. At even higher concentrations, it burns the skin. It is not flammable on its own, but when it reacts with other chemicals, it quickly releases oxygen, creating an environment ripe for explosions. At its highest concentrations, hydrogen peroxide can be rocket fuel. Even with a cheap stove, it’s easy to simmer water out of hydrogen peroxide, leaving behind something more potent. It takes time, and he had plenty of that.

He added the muriatic acid and watched as the chemicals crystallized. The crystals are known as triacetone triperoxide, or TATP. A spark, electrical current, even a bit of friction can set off an explosion. If there’s too much acid, or the balance of acetone and hydrogen peroxide isn’t quite right, the reaction will speed out of control and trigger a chemical blast.

This was the moment when things often went wrong in basement laboratories, but he had done this before. A year earlier, he made his first batch under the watchful eye of his mentor. Then, a week ago, he made a practice sample in this same hotel. He took the finished product to an out-of-the-way spot, ignited it with a strand of Christmas tree lights and a battery, and watched it explode.

The white crystal compound had been popular among Palestinian terrorists. It was cheap and powerful, but its instability earned it the nickname “Mother of Satan.” Once, an amateur bomb maker in the Mojave Desert had walked under a stretch of power lines. The electrical charge in the air was enough to detonate his TATP blasting caps and send paramedics rushing to his aid. Now most professional terrorists preferred to use it in only the smallest of quantities as the detonator for a bigger bomb. Even the average suicide bomber didn’t want to carry around large amounts.

The volatile reaction was precisely the reason that all but the tiniest containers of liquids were banned on airplanes. A terrorist who boarded with a large shampoo bottle full of the right chemicals could conceivably create TATP in midair. It was unlikely, but the US government concluded that it was too risky to chance. One tablespoon of crystals was enough to blow through a cinder block. One cup could rip open the hull of an airplane.

The young bomber wanted to cook up two pounds.

When he was done mixing, he rinsed the crystals with baking soda and water to make his creation more stable. He placed the finished product in a wide-rimmed glass jar about the size of a coffee tin and inspected his work. There would be enough for three detonators. Three detonators inside three backpacks filled with a flammable mixture and ball bearings—the same type of weapon that left 52 dead in London in 2005.

There was more work to be done. He had to finish the main charge, a mixture of flour and cooking oil. Concealed in a backpack and ignited by the TATP, these household ingredients would create a massive dust explosion and fireball. That could come later. The hardest part was complete.

He was ready for New York.

THE MARRIAGE IS READY

The address of the Federal Bureau of Investigation’s Joint Terrorism Task Force in New York, the hub for all law enforcement intelligence in America’s most populous city, is not advertised. The office is in a block-long brick–and–terra-cotta building at the western edge of Manhattan’s gentrified Chelsea neighborhood. A half century ago, it was part of a Nabisco factory complex producing Oreo cookies and saltine crackers. Today the giant rows of industrial ovens on the tenth floor have been replaced by a sterile government office suite, unadvertised and unremarkable.

From that floor, Assistant Special Agent in Charge Don Borelli had one of the most spectacular views in the city. Sitting at his desk, he could see the Hudson River, Lower Manhattan, and the construction cranes clustered around ground zero, where terrorists destroyed the World Trade Center on September 11, 2001. On a clear day, he could see the Statue of Liberty in the distance.

At forty-eight, Borelli retained the laid-back cool of his Southern California childhood. He had a strong jaw and a full head of dark hair.
His office was decorated with mementos of a nearly twenty-four-year FBI career. Plaques noted his tenure as one of the FBI’s top agents in Jordan. Souvenir rugs commemorated his time in Pakistan. There he interrogated and won a confession from a scientist working to obtain anthrax for the terrorist group al-Qaeda. And he had fingerprinted and photographed senior al-Qaeda member Ramzi bin al-Shibh, a would-be hijacker who was whisked off to a CIA secret prison. On his desk, Borelli kept a prescription bottle labeled “Prozac.” He’d gotten the container from a pharmacist friend and filled it with M&M’s, a bit of dark humor aimed at newcomers who dropped in and saw the boss hard at work, apparently crunching away on antidepressants.

It was an unremarkable late-summer Wednesday, a bit cloudy with a gentle breeze. Borelli occupied the morning by looking at intelligence reports indicating that a terrorist named Saleh Ali Saleh Nabhan might soon emerge from hiding in Africa. The FBI had been looking for Nabhan since 1998, when Borelli was sent to Kenya as part of the team that responded to al-Qaeda’s twin bomb attacks on the US embassies in Nairobi, Kenya, and Dar es Salaam in Tanzania. The attacks left hundreds of local civilians dead, along with the targeted Americans. More than a decade later, he didn’t see anything in the new reports to suggest that a break in the case was imminent. Rumors circulated all the time. Everyone would get spun up, but leads like this one almost always turned out to be nothing.

The phone on his desk rang.

It was Bill Sweeney, calling from the Counterterrorism Division at FBI headquarters in Washington.

“You up to speed on High Rise?” Sweeney asked.

Borelli had the highest level of security clearance and was privy to intelligence from across the globe that had anything to do with New York. As a supervisor of the country’s largest counterterrorism task force, the one designated to protect America’s number one target, Borelli was expected to know about problems before headquarters
called. But there were thousands of open cases, and he’d never heard of this one.

Sweeney paused. They were talking on the general line, not the secure, encrypted phone.

“You better get up to speed,” Sweeney advised. “It’s coming at you, ninety miles per hour.”

Even as one of the office’s most senior people, Borelli could not access top-secret intelligence at his desk. Though everyone in the FBI office suite had passed background checks and polygraphs, federal regulations require that the nation’s most highly classified information be stored in special rooms accessible only to those with the right clearances and a need to know.

The rooms are called Sensitive Compartmented Information Facilities, or SCIFs. They can’t be found on any public blueprint or building schematic. But there are thousands around the country, in federal buildings, on military bases, and in the offices of private security contractors. The White House Situation Room is one, as is the Joint Chiefs of Staff conference room known as “the tank.”