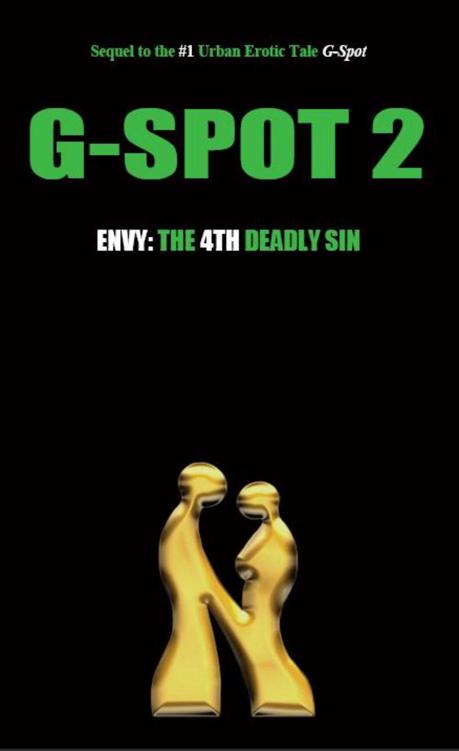 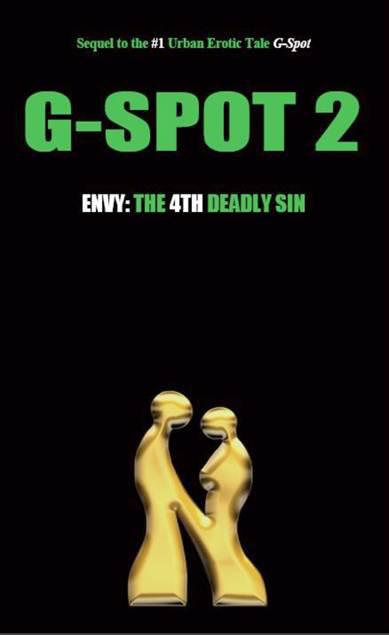 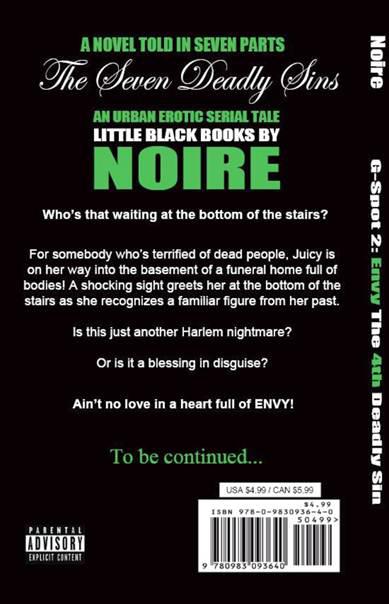 G-Spot 2: The Seven Deadly Sins, ENVY: The 4TH Deadly Sin
is a work of fiction. Names, characters, places, and incidents are the product of the author’s imagination or are used fictitiously. Any resemblance to actual events, locales, or persons, living or dead, is entirely coincidental.

Juicy is facing a whole new set of problems!

The grimy road of life takes more crazy twists and turns when Juicy-Mo hits the bricks and lands right back in the heart of Harlem!

The chaos and danger she thought she’d escaped comes rushing back to haunt her as a blast from her past shows up in the basement of a funeral home!

What’s next for the sexy Harlem stunna who just can’t seem to catch a break? Will she end up stretched out cool in a box, or will she escape the clutches of her destiny and live to fight another day?

Find Out More In

From the Streets to the Sheets

(with Mary B. Morrison)

Lifestyles of the Rich and Shameless:

Puttin’ Shame in the Game

The Misadventures of Mink LaRue

I can’t believe it!
ENVY the 4
th
Deadly Sin
is already here, and that means we are halfway through the saga of Juicy-Mo Stanfield and our harrowing journey through her crazy, dangerous, and exciting life!

Pride. Betrayal. Greed. ENVY. Lust. Trickery. Revenge.
I can’t tell you how many emails and messages I’ve received regarding

G-Spot 2: The Seven Deadly Sins
over the past few months. It has been really great to hear your thoughts, and to crack up about your predictions oft what’s waiting around the next corner for Juicy-Mo Stanfield, Harlem’s #1 Stunna.

There are still a few readers who are slowly catching on to the fact that the seven parts of G-Spot 2 are not individual books, and therefore, there will not be a beginning, a middle, and a resolution at the end of every Deadly Sin.

The best way to look at G-Spot 2 is as a literary saga. Seven magnificent parts of one original novel where there are endless plot twists and turns, old characters getting murked and new characters showing up, and never a dull moment in between.

It takes a lot of skill to keep you committed to a saga of this magnitude for seven months, and I promise there will not be a resolution or an ending to the drama until the last page of REVENGE, and that’s the way the majority of my friends and readers want it!

This here ain't no romance,

Juicy's back in Harlem

And she’s bout to catch some hell

She’s creepin’ in the basement

And that shit is smellin’ foul

Drugs are flowing in the streets

And thugs are on the prowl

They’re racin’ for that paper,

’Cause
ENVY
is a
SIN!

But it couldn’t be G!

G’s black ass was dead. I had watched Jimmy blast his whole chest open right in front of my eyes!

No, it wasn’t the notorious Granite McKay sitting in that plush armchair in the basement of that funeral home, but it
was
a stone-cold killer who was dressed like G from head to toe and twirling an onyx ring on his finger.

“
Fletcher!
” I screamed real loud when I recognized who it was. A huge wave of relief washed over me at the sight of Jimmy’s old friend from back in the day. “Boy! What the hell are you doing down here?”

“It’s Flex, remember?” he said smoothly. He stood up and opened his arms real wide, and I was so happy that G hadn’t crawled outta his wet grave to get me that I fell right into them.

“It’s good to see you, Juicy-Mo,” he held me close to his chest for a few seconds and then beamed at me with that same dumb, bucktoothed smile of adoration he used to give me back when he was ten.

“Boy, you almost made me pee on myself! I can’t believe it’s you!” I stepped back and took a good look at him while holding on tight to both of his hands.

“But what the hell are you
doing
down here?”

The last time I’d seen Fletcher Boykin I was chained to a pole in the Dungeon at the G-Spot. G had been feeling generous that day, so mad niggahs was coming through to fuck me for free, but I was bleeding and filthy, and so run-through that Flex didn’t even want him none.

I glanced around in disbelief. It looked like something out of a damn horror movie down there. The walls were made of rough cinderblocks, and exposed pipes and electrical wiring crisscrossed each other and ran over our heads.

“Boy, what in the world are you doing chilling in a damn funeral home?” I was
too
creeped out. Rita must have been outta her mind for sending me to hide out in a joint full of dead bodies.

'Twas the Night Before Mischief by Nina Rowan
Love Is a Mix Tape: Life and Loss, One Song at a Time by Rob Sheffield
Dragon Awakened by Jaime Rush
Blood Oranges (9781101594858) by Tierney, Kathleen; Kiernan, Caitlin R.
In The Royal Manner by Paul Burrell
The Price of Success by Maya Blake
TORN by HILL, CASEY
Heartsong by Knight, Allison
Murder Most Posh: A Mrs. Xavier Stayton Mystery by Robert Colton
My Life in Heavy Metal by Steve Almond
Our partner