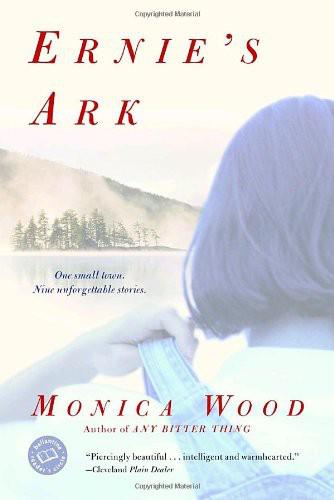 All rights reserved. No part of this book may be reproduced in any form without written permission from the publisher.

This is a work of fiction. Names, places, characters, and incidents are products of the author’s imagination or are used fictionally. Any resemblance to actual people, places, or events is entirely coincidental.

for Cathe, who remembers everything

and in loving memory of our parents

The Temperature of Desire

Solidarity Is Not a Floor

Ernie was an angry man. He felt his anger as something apart from him, like an urn of water balanced on his head, a precarious weight that affected his gait, the set of his shoulders, his willingness to move through a crowd. He was angry at the melon-faced CEO from New York City who had forced a strike in a paper mill all the way up in Maine—a decision made, Ernie was sure, in that fancy restaurant atop the World Trade Center where Ernie had taken his wife, Marie, for their forty-fifth wedding anniversary last winter, another season, another life. Every Thursday as he stood in line at Manpower Services to wait for his unemployment check he thought of that jelly-assed CEO—Henry John McCoy, with his parted blond hair—yucking it up at a table laid out in bleached linen and phony silver, figuring out all the ways he could cut a man off at the knees three weeks before retirement.

Oh, yes, he was angry. At the deadbeats and no-accounts who stood in line with him: the Davis boy, who couldn’t look a man in the eye; the Shelton girl, with hair dyed so bright you could light a match on her ponytail. There were others in line—millwrights and tinsmiths and machine tenders whose years and labor had added up to a puff of air—but he couldn’t bear to look
at them, so he reserved his livid stare for the people in line who least resembled himself.

He was angry at the kids from Broad Street who cut through his yard on their dirt bikes day after day, leaving moats of mud through the flowery back lawn Marie had sprinkled a season ago with Meadow-in-a-Can. He was angry with the police department, who didn’t give a hoot about Marie’s wrecked grass. He’d even tried city hall, where an overpaid blowhard, whose uncle had worked beside Ernie nineteen years ago on the Number Five, had all but laughed in his face.

When he arrived at the hospital after collecting his weekly check, Marie was being bathed by a teenaged orderly. He had seen his wife in all manner of undress over the years, yet it filled him with shame to observe the yellow hospital sponge applied to her diminishing body by a uniformed kid who was younger than their only grandchild. He went to the lobby to wait, picking up a newspaper from among the litter of magazines.

It was some sort of city weekly, filled with mean political cartoons and smug picture captions fashioned to embarrass the President, but it had a separate section on the arts, Marie’s favorite subject. She had dozens of coffee-table books stowed in her sewing room, and their house was filled with framed prints of strange objects—melted watches and spent shoelaces and sad, deserted diners—that he never liked but had nonetheless come to think of as old friends. He had never known her to miss a Community Concert or an exhibit at the library where she had worked three days a week since she was eighteen; every Sunday of their married life, Ernie had brought in the paper, laid it on the kitchen table, and fished out the arts section to put next to Marie’s coffee cup.

The weekly was printed on dirty newsprint—paper from out of state, he surmised. He scanned the cheap, see-through pages, fixing on an announcement for an installation competition, whatever that was. The winning entry would be displayed to the public at the college. Pictured was last year’s winner, a tangle of pipes and sheet metal that looked as if somebody had hauled a miniature version of the Number Five machine out of the mill, twisted it into a thousand ugly pieces, then left it to weather through five hundred hailstorms. Not that it would matter now if somebody did.
The Burden of Life,
this installation was called, by an artist who most likely hadn’t yet moved out of his parents’ house. He thought Marie would like it, though—she had always been a woman who understood people’s intentions—so he removed the picture with his jackknife and tucked it into his shirt pocket. Then he faltered his way back up the hall and into her room, where she was sitting up, weak and clean.

“What’s the latest?” she asked him.

He sat down on her bleach-smelling bed. She herself smelled of lilac. “McCoy’s threatening to fold up shop.”

She put her fragile, ghostly hand on his. “It’s been eight months, Ernie. How long can a strike last?” She was thinking, of course, of his pension held hostage, the bills she was racking up.

“We’ll be all right,” he said. The word
we
always calmed him. He showed her the clipping. “Can you feature this?”

“He should’ve called it
The Burden of My Big Head
.”

She laughed, and he was glad, and his day took the tiniest turn. “Philistine,” she said. “You always were such a philistine,
Ernie.” She often referred to him in the past tense, as if he were the one departing.

That night, after the long drive home, he hung the clipping on the refrigerator before taking Pumpkin Pie, Marie’s doddering Yorkshire terrier, for its evening walk. He often waited until nightfall for this walk, so mortified was he to drag this silly-name pushbroom of an animal at the end of a thin red leash. The dog walked with prissy little steps on pinkish feet that resembled ballerina slippers. He had observed so many men just like himself over the years, men in retirement walking wee, quivery dogs over the streets of their neighborhood, a wrinkled plastic bag in their free hand; they might as well have been holding a sign above their heads: Widower.

The night was eerie and silent.
FOR SALE
signs had popped up even in this neighborhood of old people. This small, good place, once drenched with ordinary hopes and decent money, was beginning to furl like an autumn leaf. At the foot of the downhill slope of Randall Street, Ernie could see the belching smokestacks of Atlantic Pulp & Paper, the dove-gray plume curling up from the valley, an upward, omnipresent cloud rising like a smoke signal, an offering to God. Cancer Valley, a news reporter once called the city of Abbott Falls, but they needed the steam, the smoke, the rising cloud, the heaps and heaps of wood stacked in the railyard, even the smell—the smell of money, Ernie called it—they needed it. He thought of the son of a bitch working his very spot, this very night, wiping the greasy heat from his forehead; he wondered which of life’s cruelties had converged upon this man to impel him to cross a picket line, step over a man with a dying wife, and steal his job. Did he, too, have a dying wife? Eight
months ago, watching the first of them marching in there under police guard, he could not have mustered a human feeling for the stranger hooking up chlorine cars or running pipe in the bleachery. Ernie’s own circumstances, his own livelihood, seemed to melt further into dream every day. Every few weeks there was word of negotiation—another fancy-restaurant meeting between McCoy’s boys and the national union—but Ernie held little hope of recovering the bulk of his pension. That, too, felt like knowledge found in a dream.

As he turned up his front walk, he caught the kids from Broad Street crashing again through his property, this time roaring away so fast he could hear a faint shudder from the backyard trees. “Sonsabitches!” he hollered, shaking his fist like the mean old man in the movies. He stampeded into the backyard, where Marie’s two apple trees, brittle and untrained, sprouted from the earth in such rootlike twists that they seemed to have been planted upside down. He scanned the weedy lawn, dotted with exhausted clumps of Marie’s wildflowers and the first of the fallen leaves, and saw blowdown everywhere, spindly parts of branches scattered like bodies on a battlefield. Planted when their son was born, the trees had never yielded a single decent apple, and now they were being systematically mutilated by a pack of ill-bred boys. He picked up a branch and a few sticks, and by the time he reached his kitchen he was weeping, pounding his fist on the table, cursing a God who would let a woman like Marie, a big-boned girl who was sweetness itself, wither beneath the death-white sheets of Western Maine General, thirty-eight miles from home.

He sat in the kitchen deep into evening. The dog curled up on Marie’s chair and snored. Ernie remembered Marie’s laughter
from the afternoon and tried to harness it, hear it anew, make it last. The sticks lay sprawled and messy on the table in front of him, their leaves stalled halfway between greenery and dust. All of a sudden—and, oh, it was sweet!—Ernie had an artistic inspiration. He stood up with the shock of it, for he was not an artistic man. The sticks, put together at just the right angle, resembled the hull of a boat. He turned them one way, then another, admiring his idea, wishing Marie were here to witness it.

Snapping on the floodlights, he jaunted into the backyard to collect the remaining sticks, hauling them into the house a bouquet at a time. He took the clipping down from the fridge and studied the photograph, trying to get a sense of scale and size. Gathering the sticks, he descended the stairs to the cellar, where he spent most of the night twining sticks and branches with electrical wire. The dog sat at attention, its wet eyes fixed on Ernie’s work. By morning the installation was finished. It was the most beautiful thing Ernie had ever seen.

The college was only four blocks from the hospital, but Ernie had trouble navigating the maze of one-way roads on campus, and found the art department only by following the directions of a frightening girl whose tender lips had been pierced with small gold rings. By the time he entered the lavender art office, he was sweating, hugging his beautiful boat to his chest.

“Excuse me?” said a young man at the desk. This one had a hoop through each eyebrow.

“My installation,” Ernie said, placing it on the desk. “For the competition.” He presented the newspaper clipping like an admission ticket.

“Am I early?” Ernie asked, feeling foolish. The deadline was six weeks away; he hadn’t the foggiest idea how these things were supposed to go.

“Are you in Elderhostel?” the boy asked. “They’re upstairs, fifth floor.”

“I want to enter the contest,” Ernie said. And by God, he did; he had never won so much as a cake raffle in his life, and didn’t like one bit the pileup of things he appeared to be losing.

Un-Connected by Rea, Noah
The Bomber Dog by Megan Rix
The Stealers' War by Stephen Hunt
Clearwater Romance by Marissa Dobson
Almost Everything by Tate Hallaway
Against a Brightening Sky by Jaime Lee Moyer
The Pastor's Wife Wears Biker Boots by Karla Akins
The Nurse's Love (BWWM Romance) by Tyra Brown, BWWM Crew
Shadow Games: The Fourth Chronicles of the Black Company: First Book of the South by Cook, Glen
Just After Sunset by King, Stephen
Our partner