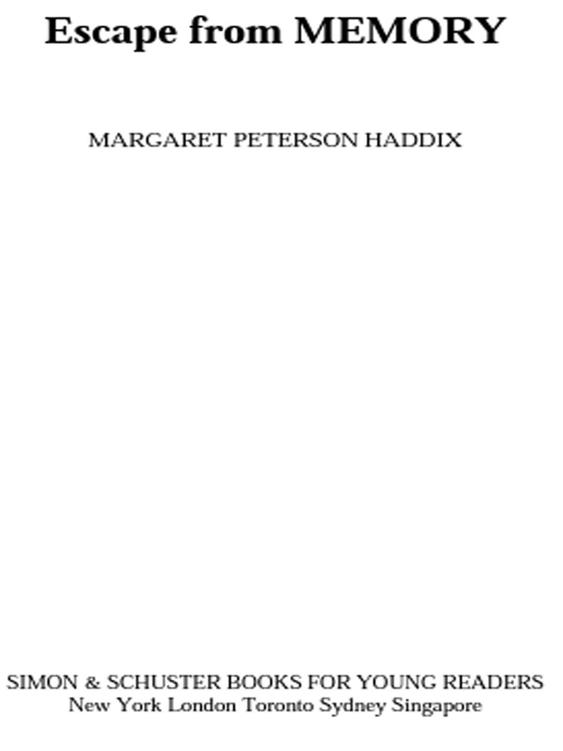 The text for this book is set in Golden Cockerel ITC.

Summary: Allowing herself to be hypnotized, fifteen-year-old Kira reveals memories of another time and place that may eventually cost her and her mother their lives.

For my mother and daughter, Marilee and Meredith

With thanks to my uncle, retired Air Force Command pilot Jim Greshel, and my cousin, LAPD officer Karima Tahir, for their assistance in researching this book. They always gave me wise, sensible answers, and I appreciated that even when Kira’s story took other twists.

The darkness was coming. I wrapped my arms tighter around Mama’s neck and burrowed into her coat.

Even though I was very little, I could hear the fear in her voice. Something very bad was nearby. That was why she was carrying me through the streets at twilight, a time I normally would have been home in the nursery, curled up on her lap listening to bedtime stories. But I felt safe, because Mama was holding me close. Mama would take care of me.

Were there guns that weren’t toys?

I put my hands over my ears so I couldn’t hear.

Mama and I veered through dark alleys and past strange houses. Once, Mama stumbled on a cobblestone, but she threw her arm out and braced herself against a wall so she wouldn’t drop me. I cried out with the jolt, and she shushed me:
“Shh. Sazahlya, sazahlya, sazahlya.”

I buried my face in her neck and was lulled by the restored rhythm of her walking and her reassurances. Sleepily, I decided not to beg for extra bedtime stories when we got home. I tried to tell Mama that, but I couldn’t. Maybe I wasn’t old enough to talk.

We turned in front of one of the dark houses. Mama climbed several steep stairs and pulled open a heavy door. Then we were in a small room without any furniture or pictures or even windows. Mama sat on the floor and hugged me, weeping. She rocked me back and forth.

I blinked a few times, so my eyes could readjust to the dim light in the Robertsons’ family room.

“So what great buried memory did I come up with?” I asked. “The trauma of second-grade math? I told you it wasn’t worth hypnotizing me. My life has been too—” I stopped without saying “dull,” because I suddenly realized that all three of my closest friends were staring at me. Their faces, starting with Lynne’s thin, dramatic one and ending with Courtney’s heavyset, normally placid one, all held identical expressions: eyes wide, eyebrows raised, mouths agape.

Some thread of memory tickled my brain, then it was gone. Everything around me was too ordinary and familiar: our sleeping bags spread out on the Berber carpet, the brightly colored bags of Fritos and M&M’s we’d been eating before we decided to experiment with hypnosis. It was Friday night, and we were having a sleepover at Lynne’s house. That’s what we did every
Friday night. It didn’t fit with the wisp of fear I still felt, without knowing why.

“You never told us,” Lynne said slowly, “that you and your mother came here to escape
danger
.”

She sounded pleased and intrigued, as if I had presented her with a fascinating physics question. Lynne was the only person in Willistown history who’d ever taken physics as a freshman—or, as Andrea liked to remind her, who’d ever wanted to.

“Or that you had a
nursery
when you were a baby,” Courtney said. She emphasized the word “nursery” as though it were something only movie stars and royalty had for their children. Certainly no one in Willistown did.

“Or that you called your mother ‘Mama,’” Andrea added.

“Don’t all little kids call their mothers ‘Mama’? Before they can say ‘Mommy’?” I said defensively, though I didn’t really know. I was an only child. My friends were the ones with younger brothers and sisters and cousins and—in Andrea’s case—even nieces and nephews. They all had family coming out their ears.

All I had was Mom.

“But you said it with an accent,” Lynne said. “And those other words—
Sazahlya? Molya ste eha dostahna?
” She pronounced the words carefully, but her flat Ohio vowels sounded all wrong. “What do they mean?”

“
Sazahlya’s
like ‘Hush, hush, it’s all right, everything’s okay.’ People say it to babies,” I answered without thinking.

My friends gave me their bug-eyed, drop-jawed stares again.

“Not around here, they don’t,” Lynne said cautiously. “What language is that?”

“Then how do you know what it means?”

“I don’t know,” I said again. I squirmed a little. The Robertsons’ family room, where I’d probably spent half my life, suddenly seemed strange and uncomfortable.

“Then what’s that other phrase mean?
Molya ste eha dostahna?
” Lynne asked. She narrowed her eyes, the way she did when a teacher actually managed to find a homework question that was hard enough for her. Courtney and Andrea watched in silence, willing, as usual, to let Lynne speak for them.

Usually I would have been letting her speak for me, too. But now I was trying to shut out the sound of her voice, to hear
Molya ste eha dostahna
the way someone—Mom?—had said it in my memory. I shivered, remembering the cold wind on my face. Remembering hiding my face in my mother’s coat.

But that was all I could remember.

I was trying too hard.

“Why does it matter?” I asked. “I probably just read it somewhere. Or heard it on TV. Maybe what you say under hypnosis is like dreaming. Just nonsense.”

“But you made it sound so real,” Andrea said. It had been her idea to try hypnosis, just because she hadn’t liked the video we’d all picked out. I didn’t know why I had to be the featured entertainment instead.

I got another flash of memory—the feel of my chubby toddler arms around my mother’s neck.

Mom and I did not hug each other.

I sighed. “Tell me everything I said,” I asked reluctantly. I resisted the urge to pull my legs toward my body and clutch them with my arms, to huddle like a terrified child.

Why was I scared if it was all just a crazy story I’d made up?

Defiantly, I stretched my legs out and leaned back on my arms—the typical teenager sprawl. A triumph of body language. My fear ebbed. I refused to treat this seriously.

Lynne was already telling my story, word for word, she claimed. Then, of course, she had to analyze it.

“Well, it’s pretty clear to me,” she said. “You’re obviously a refugee from some war-torn country. Your mother must have smuggled you across some border…. You moved here when you were two, right?”

“Yeah, from California,” I said, rolling my eyes. “No wars there.”

“That’s what your mother
says,
” Lynne countered. “Hey, maybe you’re illegal immigrants.” Her face brightened, as if she liked that possibility. “Your mother’s one clever woman. Who’d look for illegal immigrants in Willistown, Ohio?”

“Every single employer in town,” Andrea said, sounding pleased at outsmarting Lynne for once. “You have to show proof of citizenship when you get a job.” She was the only one of us so far who had attempted that feat. She was going to be lifeguarding at the town swimming pool as soon as it opened in the summer.

My mother had worked at the town library for the past thirteen years. Maybe thirteen years ago people didn’t have to prove their citizenship.

I didn’t share this obvious gap in logic with my friends.

Lynne had already moved on to the next puzzle.

“But where are you
really
from?” She squinted at me, as if trying to read some hidden map on my face. “Let’s see, thirteen years ago there were battles in Eastern Europe and the old Soviet Union. The Irish-English squabbles were relatively
calm”—trust Lynne to carry around a social studies time line in her head—“and there’s almost always some conflict in the Middle East and Central America and parts of Africa.”

“Do I
look
like I’m from the Middle East? Or Central America? Or Africa?” I asked.

“There are all sorts of people living in all of those places,” Lynne retorted. “In fact, that might have been why you had to leave, because the indigenous people threw out the imperialist invaders.”

Great. Now I was an imperialist invader.

“You do look kind of different,” Courtney offered. “No offense.”

I’d been afraid someone would say that. I blushed, knowing that, even with the extra color, my skin was still paler than my friends’. My hair was dark and cut the same way as theirs—longish and pulled back in ponytails or tucked behind my ears most of the time. But in the right light my hair had an almost bluish cast to it. And my eyes were just as dark and ever-so-slightly slanted. Not enough to look Asian. Just enough to look … different.

“That doesn’t prove anything,” I protested. “Look at, uh, Natasha Jones. Natasha’s a Russian name too. Do you think she’s an illegal immigrant? A refugee?”

Natasha Jones was a year ahead of us at school and served as the county Beef Queen. She had blond hair and blue eyes, and Lynne had joked once that she looked corn-fed, just like the cattle she promoted. Natasha was Willistown, through and through.

Andrea reached for a handful of Fritos, as casually as if we were discussing some ridiculous soap opera, not my life.

“You guys are being way too hard on Kira,” she said. “You don’t have to make her into a foreigner or something.” I almost forgave her for the Fritos. Then she went on. “I know what must have happened. Kira’s dad must have been an alcoholic or a drug addict or something, and he was always beating up Kira’s mom, so she ran out on him. Disappeared without a trace. Then she hid in Willistown, because he would never look
here
. I saw a TV movie about that once. This woman changed her whole identity and her kid’s—your name probably isn’t even Kira at all.”

Andrea was looking straight at me. I stared straight back. I hoped she thought I was struck speechless by the craziness of her explanation. I hoped she and Lynne and Courtney couldn’t tell that if I so much as breathed, I was going to cry.

Now she was looking at me too, appealingly.

“Of course that’s what Kira’s mom would say, to cover up,” Andrea said.

Spellbound by Blake Charlton
Falling Down by David Cole
Reckless in Moonlight by Cara Bristol
Stewards of the Flame by Engdahl, Sylvia
Circles in the Sand by D. Sallen
The Only Girl in the Game by John D. MacDonald
Adrift by Elizabeth A Reeves
You are not a Gadget: A Manifesto by Jaron Lanier
Superlovin' by Vivi Andrews
The Last Laugh by Franklin W. Dixon
Our partner