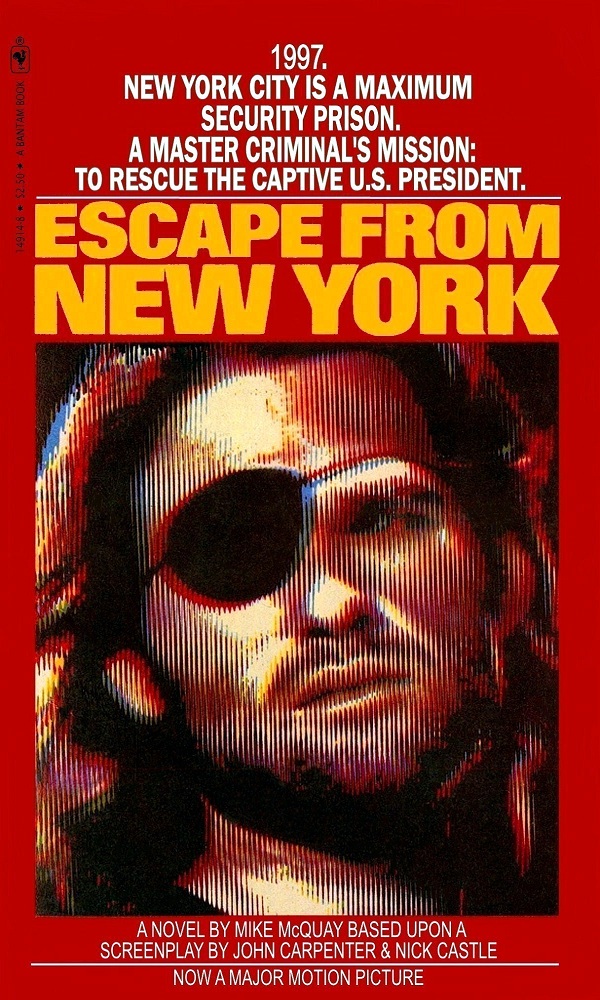 “It’s the
President
we’re talking about,” spat the Secretary. “Trapped in that hell-pit called New York. If we don’t get him out, it could mean all-out war.”

“What do you mean?” asked Hauk.

“There’s a briefcase cuffed to his wrist that holds a cassette. The cassette talks about a powerful new bomb, a fusion bomb that . . .”

“Never mind,” Hauk snapped. “How long have we got?”

“We could never get in there with troops,” said Hauk, pacing. “But
one
person could get in unnoticed.”

“We’ve got a prisoner here name of Plissken. Snake Plissken.”

Bantam Books are published by Bantam Books, Inc. Its trademark, consisting of the words “Bantam Books” and the portrayal of a bantam, is Registered In U.S. Patent and Trademark Office and in other countries. Marca Reglstrada. Bantam Books, Inc., 666 Fifth Avenue, New York, New York 10103.

I: BANK OF THE UNITED STATES COLORADO FEDERAL RESERVE

II: IN THE TUBES

XII: A NIGHT AT THE OPERA

XVI: GYPSIES ON THE STREETS

For Karen,
who looks out for me.

He was a cat. He was an iron bar fistload in a hard right hand. He was rough like a chisel and relentless as a jackhammer. He was Snake Plissken and he was running for all he was worth.

The hallway stretched out long and dark before him; neon script crawled the walls in patterns as complex as spider webs. Dizzying patterns. Insane patterns. Symptoms of the nerve gas madness that dipped out of the sky to touch everyone’s life from time to time.

His feet slapped the fake marble floors, echoed hollowly back down the hallway behind him, and he pulled the blue satchel that he carried a little closer to his chest. Just a few minutes more. He was almost safe.

His bad eye throbbed under its black shiny patch; shooting tentacles of pain back through his head, inflaming his brain straight down through his spinal column. But that was okay; the pain was always there, reminding him, pulling his still-youthful face into a tight-lipped grimace that made most people leave him alone. And Snake Plissken liked that just fine.

The hallway branched off like a “T.” Plissken hit the blank wall, arms up, and bounded off down the right fork. Then he heard sounds up ahead, and immediately slowed his pace, looking for cover.

He stopped, head darting, good eye straining against the blackness of the corridor. The sounds were getting closer. He caught sight of an open doorway ten paces ahead and approached it as quietly as he could.

He gave it a couple of seconds by the open space, listening. Hearing nothing human, he ducked inside. It was a computer room, webbed crazily with neon. Chirping, chattering machines piled the place full like a maze. They clicked and whirred and worked their little hearts out

The room was a mausoleum, without life. It ran itself and left the flesh-and-blood folks out in the cold. The bank didn’t mind the gas, or the war, or even Snake Plissken for that matter. The bank just went on, while everything else fell to pieces around it. It didn’t care. It didn’t give a holy goddamn in hell.

The noise in the corridor was very close. Plissken ducked down behind a market quotations teletype and held his breath. His brown maintenance uniform with COLORADO SOLAR stitched across the breast pocket was bunching tight around his neck. He tore open the top few snaps.

The sound was right by him. It seemed to be creaking, moving past his position. He stayed as flat as he could against the machine, only daring a look after the sound had gone past.

It was a trolley, a miniature, stainless steel trolley with speakers mounted on the side.

It began to talk: “Attention. Banking hours are over. Lock-up begins in thirty seconds. All personnel must leave the blue coded areas immediately. Thank you.”

Plissken stood up, hugging his satchel to his chest once again, and watched the little machine chug off down the aisle and out a far door. The thing had a female voice, pleasant. Sexy. He waved to it as it went. He didn’t worry about the message. It wasn’t meant for him.

His hair was beginning to spill out from under the maintenance cap that completed his disguise. He stuck it back under, and moved quickly through the room, following in the wake of the trolley.

Once he was through the computer room, he found himself back in the hall. It was time to get going. He began looking for a man trap, his passkey to the outside.

He ran along the halls until he found one. Cold steel, it sat unornamented at the end of one hall. Dropping his satchel, Plissken leaned down and glared his good eye into the ID slot. Reaching into the pocket of his uniform, he pulled out a small screwdriver with the elongated tip that Bill Taylor called the Slotprick.

Looking once down the hall, he slipped the driver into the slot and the door sprang open. Stepping inside, he found himself in a small cubicle. The door slammed closed behind him. It had no slot on his side.

He turned to the other wall and found the other door. The pressure was building within him as he fumbled with the driver. But he didn’t mind the pressure. It made him feel real. Uncle had taught him about pressure at Leningrad, and now he had freon in his veins. Freon and anti-freeze. He was kept alive by a gut furnace of hatred that burned deep and steady inside, that was always pushing that pressure dial into the red, threatening to consume him at any second.

The driver found the terminal, and the door clicked open. Plissken stood there just long enough to make sure the hallway was clear, then he took off running. He didn’t notice the tiny wall camera that followed his movements like a mongoose with a cobra.

He ran hard, lungs controlled, not yet winded. Light hazed at the end of the corridor. It was the fuzzy light of the main chamber that would usher him to the vators, then to the roof and freedom. He pumped a little harder.