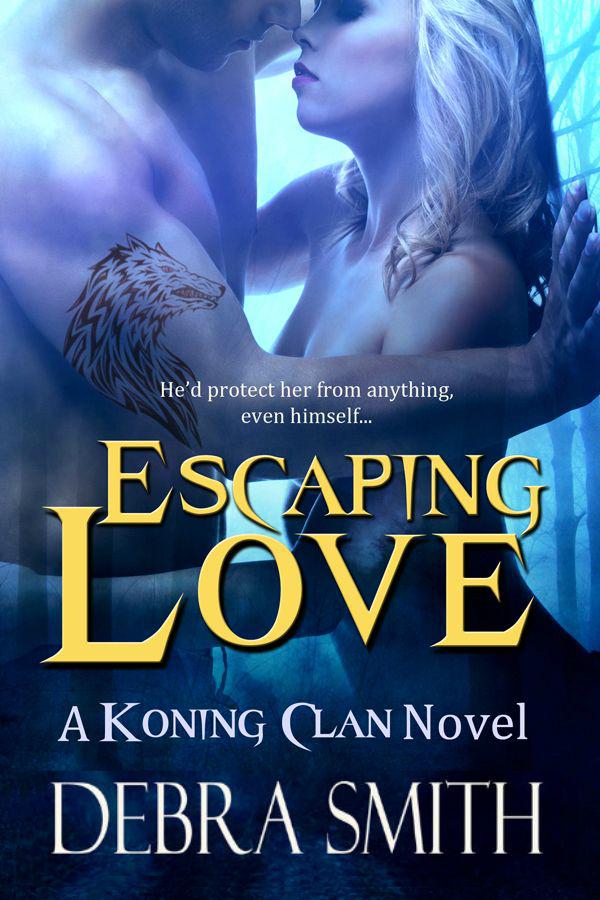 Escaping Love is a work of fiction and the characters, events, and dialogue found within the story are of the author’s imagination and are not to be construed as real. Any resemblance to actual events or persons, either living or dead, is completely coincidental.

No part of this book may be reproduced or shared in any form or by any means, electronic or mechanical, including but not limited to digital copying, file sharing, audio recording, email and printing without permission in writing from the author. Unless used in a review. Your support of the author’s rights is appreciated.

I would like to give a special thanks to
Maryse’s Book Blog for inspiring me to read PNR which lead me to my writing and to the Goodreads group
PNR NaUBA.

Also a
huge thanks to all the other Bloggers and reviewers that take the time to support me by writing a review and reading my work.

Thank you to my family for supporting my efforts by giving it to me straight whether I wanted to hear it or not.
;-) Love you more than words can say.

Sincere and special thanks to Gary Taylor for helping me past my writers block and providing the inspiration I needed.

Most important I would like to thank my readers for their continuing support and sticking with me through my writing journey.

Runn
ing. Running used to be freedom, now it was her only chance of survival. The feeling of leaves and grass against the pads of her feet, the moist smell of earth, the way the trees would open their branches like a mother opening her arms to a long-awaited child— gone. Now shadows that used to hold wonder only held fear. The night used to be something that called to her, but now only served one purpose—a chance of escape from her life.

One she never wanted.

She lifted her muzzle to scent the air. Upwind, she held the advantage. Taking a moment to suck in much needed air, she stopped and rested. The pounding of her heart was the only familiar sound in the foreign woods. To think she made it all the way to Colorado from South America.
Her
, the most delicate of her family.

She snorted
. Delicate, her ass. She had to be smarter, faster, and more lethal than all the males of her Clan. What was the saying? Practice made perfect. Wrong. Practice at perfection made her the perfect predator.
Say that five times fast.

She lived for the hunt. But because of some stupid prophecy, she was to be a treasure
to her people. Never allowed to see the outside world.

The rays of the full moon danced across her white fur
, giving off a luminescent glow. So what if she was rare. So what if she was the only white panther to be born in the last four-hundred years. She was still a person with her own thoughts, desires, and dreams. That’s why she was heading to the middle of nowhere. If she could plead her case to Jenifer Koning, then maybe her father would have to listen to reason.

She growled at the reminder of why she had to travel such an impossible distance. Her father planned on selling her to some man with a big pocketbook. He told her it was for the good of her Clan. It was her duty to follow tradition. H
er soul was being torn in two. Her loyalty to her people demanded she turn around, beg forgiveness, and fill the role her Clan required of her. She could be the quiet and proper lady stuck in a mating void of love but her home would be better for it.

Home.
Her heart squeezed at the thought. If her animal half could cry, tears would be streaming down her cheeks. A simple four letter word held so much weight. Her grandmother had always told her that her Clan was her home and she should always do what she could to make the lives of her people better.

It was more than just her responsibility it was her purpose. But as the
Presentation to the Clans
drew closer she fled. Something inside her refused to accept her fate. Maybe fear, maybe the hope that she could still help her people without be stuck in a loveless mating. Was it selfish? Probably. It didn’t matter because she’d chosen her path and now she had to follow it no matter the twists and turns it presented. Life could be cruel. Her little sister had died at a young age, leaving her broken, because it was her fault. She couldn’t save Katrina and now she was the only remaining heir to her father’s title. Everything rested on her shoulders. If she could only plead her case to the one woman who might understand.

Tales of the queen reached far and wide. Jenifer defied the archaic rules of their world when she entered the Slag, the tournament of kings. Kings not
queens
being the important word. Jenifer was the only woman in their history to attempt to change her fate. Until now. Alexandria would be the next. She had to be.

Th
at’s why she ran from her Clan, more importantly her father. Part of her never thought she would make it all the way to North America from her home deep in the Brazilian jungle. Weeks of travel had taken a toll on her body, and exhaustion threatened her every step.
Soon
, she told herself. Internal strength she liked to think came from her grandmother was the only thing keeping her from collapsing.

There
. Light shined through the trees. Relief gave her the extra strength she needed.
Gryph’s
flashed in blue neon lights over the imposing red doors with a bouncer perched to the side.
Crap.
His height and massive arms crossed over his chest seemed less than inviting. How to play this? Her human appearance was meek to say the least. Maybe she could seem unimposing and just walk right in. Yeah right, a girl could dream.

I
n the center of her inner light, Alex pictured her human form. The change wasn’t painful, at least not after the very first shift. Magic allowed them to keep their clothes intac.t staying with their human form. The only drawback was that unlike the animals in nature, their color matched in both their human and animal forms.

Branches scratched her exposed skin while she parted the bushes. Sashaying toward the bouncer, she tried not to hold her breath. His scent hit her nose.
A bear.
Great
. This close to winter he could be especially grumpy.

His nostrils flared
, and brief look of confusion crossed his face before he schooled his features.

Great
, this could be harder than she thought. “I’m looking for Jenifer Koning. I request an audience.”

Claws pricked at the tips of her fingers, bringing a burning pleasure. Calming her temper, she did her best not to expose her best-kept secret.

His response, “Clint, we have a live one,
again
.”

Again?
What was that supposed to mean? Her ears tingled as she struggled to hear the voice on the end of the line. From the bear’s wince it wasn’t looking good. For him or for her.

Gritting her teeth before she gave him a reason to hibernate, she pulled open one of the big red doors.

Alex took her time entering the bar. She needed to seem
as if she had every right to be there. She couldn’t risk them kicking her out before she could plead her case to their queen. An old Vince Gil song flowed from the jukebox.  Red, faded booths and barstools filled the space. The scent of fried food assaulted her nose. Doing her best not show her repulsion, she let her gaze drift to the bar and the male striding toward her.

Good lord
, he was fine. Faded blue jeans clung to his muscular legs as the stomping of his cowboy boots echoed through the air. A green and blue plaid shirt with the top buttons unfastened revealing the tan skin of his chest, and rolled sleeves resting just below his elbows showed off his muscled forearms. The one on his right was tattooed, but she didn’t risk getting lost in its puzzle. Dusty blond locks hung in his eyes, and a five o’clock shadow covered his jaw. Firm lips pressed into a flat line temporarily distracted her from his intense blue eyes. She’d never seen such eyes. Feeling like a woman in a cliché black and white film, her world froze in time. She felt completely mesmerized by the fire in his gaze. Her skin burned, heating from the inside out, but she couldn’t stop shivering. Her mind raced to understand why her lungs refused to function and her body froze. For a moment she could swear he could see into her soul and every inner secret she dared not tell anyone else.

His mouth moved and she blinked. “I’m sorry, what did you say?”

An irritated rumble sounded in his chest. “I said, who are you?”

“Alex.”
After listening to his sweet drawl, she felt a small sensation of being welcome. And then it was gone.

His eyes
narrowed in what had to be irritation. “What’s your full name and Clan?”

The cowboy was smarter than he looked. Hot and intelligent,
be still her quaking knees. Wait, her knees were trembling. Placing her hand on the bar, she braced her body. The room started to spin. She shook her head, trying to gain focus. Alarm spread through her at the thought of showing weakness in front of him. This male was definitely a predator, and the last thing she wanted to do was fall at his feet.

Exhaustion slammed into her like a test car into a cinderblock wall. Her knees buckled, sending her forward into his awaiting arms. His concerned face was the last thing she saw.

Clint was having one hell of a day. Gryph called to inform him of his extended honeymoon. Fuck. Scrubbing a hand down his face, he wished his friend the best. Bitter jealousy coated his tongue and he hated himself for it. Gryph deserved to be happy after everything that happened to him.

Clint
couldn’t imagine losing most of his family at the age of twelve. Discovering the mangled bodies of his parents and little sister had almost crippled his friend. If Clint hadn’t been there, Gryph would have joined them. Gryph’s brother, a lone wolf, never showed up to claim the title of Clan leader leaving everything on Gryph’s pubescent shoulders.

They made quite the
pair. Both alone even thought they had each other. Unlike Gryph, Clint didn’t know who his family was. He was raised by an old bobcat by the name of Clara in Wyoming. She stumbled upon Clint while checking her fences. Growing up with a group of unwanted orphans didn’t change the fact that he had no past and therefore no future.