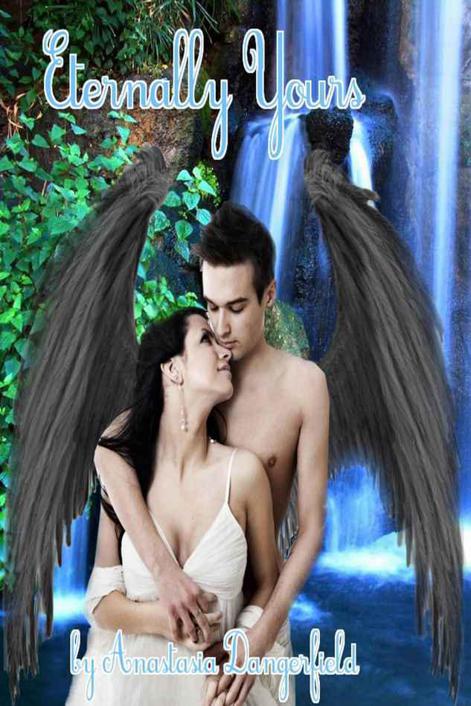 A Novel by Anastasia Dangerfield

This book is a work of fiction. Name's, characters, businesses, organizations, places, events, and incidents either are the product of the author's imagination or are used fictitiously. Any resemblance to actual persons, living or dead, events or locales is entirely coincidental.

All rights reserved. No part of this book may be used or reproduced, scanned, or distributed in any manner whatsoever without the author's consent, except in the case of brief quotations embodied in critical articles and reviews.

I want to thank you for reading m
y
first young adult novel and I hope you enjoy it! I have so many crazy ideas and love s
tories in my head and my only outlet is
to share them with the world. I hope you enjoy them as much as I do.

A special thanks to my husband (my
handsome
husband, wink, wink) for pushing me to finish this and always
believing
in me. If it weren’t for you, this would have never gotten finished. I love you.

Chapter 8-Secrets of the Past

Chapter 14-All Dressed Up

Chapter 18-Wait For Me

Chapter 19-We Had A Deal

“For it was not into my ear you whispered, but into my heart. It was not my lips you kissed, but my soul."

My traitorous heart explodes with the force of an atomic bomb inside my chest, or at least that’s the only way I can describe it. I force myself to take slow, deep breaths, hoping I don’t pass out. It’s funny how things are linked together: your eyes, your mind, your heart. For example: you watching two guys fight, your mind registering those two guys as your best friends, the guilt that it’s your fault that they are fighting, the fear that one might die, and the loss thereof. It’s an onslaught of emotions that I’m apparently not strong enough to overcome. I realize now that I should never have snuck out to meet Shadow today, because Gabriel has been so suspicious lately. I should have trusted my instincts, but I was too anxious to get out of here. To fly over the walls with Shadow and never look back, to be with the one I love. The one I'm
forbidden
to love.

My mom always told me that there was a cause and effect. She said to make wise decisions or deal with bad consequences. Only two months of being away from her and I've already forgotten her smartest advice. Now, it's all come down to this: me standing on the edge of the city, watching my fiancé and the love of my life fight. Wanting to leave, but needing to stay. I'm caught between duty and devotion,
how cliché.

The sky is growing darker with rain clouds and the wind is becoming more forceful, stirring up the dirt from the ground so that I have to shield my eyes.

“You don't know your place, you freak! You don't cross me; I'm the
Overlord
's
son
!” Gabriel’s voice echoes off the wall that traps us in here and he lands a nasty looking right hook to Shadow's nose. I hear a loud bone-crunching sound. Shadow is so focused on the fight that he barely grunts. He ducks to avoid Gabriel's next blow and jabs
him
in the stomach instead, causing Gabriel to sail backwards through the air a few feet and land on his back.

“And
you
don't know who you're messing with! I don't care who you are; you and your father mean nothing to me.
Do you hear me?
You're the only thing that stands between me and everything I want.”

Shadow straddles Gabriel, throwing alternating punches to his ribs. I have to do something before he kills him. I run towards them as fast as I can I throw my hand up screaming, “Stop! Stop!”  Neither of them listens to me. Suddenly, with a determined look, Gabriel reaches up and grabs Shadow's throat, the muscles and veins in his arm bulge as he squeezes. Luckily, Shadow grabs his wrist and jabs his locked arm before Gabriel can strangle him. Another bone-crunching sound renders the air and Gabriel's agonizing wail rattles my soul.

I fight the panic that's surging through my body, but it's no use. I can't take it anymore. I don’t want either one of them to get hurt. I shove Shadow off Gabriel as I finally descend upon them and Shadow frowns at me when he lands, looking hurt and confused, and a bit crazy with the blood pouring down his broken nose and a few other places.

Gabriel gives me a small smile before turning his attention back to Shadow. “Is everything you want
my
mate?” he growls in a deep voice through gritted teeth.

“She is not
yours
. You think everything belongs to you! That it's all yours for the taking, you spoiled bastard! Did you know that she loves
me
? That we've been meeting to be together since before your stupid vows?” Shadow stands up spitting dirt out of his mouth and wiping his bloody nose with his forearm. It must hurt because he grimaces. He looks at me with an apologetic expression and I just stand here frozen and shocked. I don’t know what to say.

Gabriel pauses at the admission. His shocked expression doesn't hide the horror I see so plainly in his searching eyes. He seems to realize some things finally adding up but that make no since but it’s so totally absurd.

I sigh and let my shoulder slump a little. I didn't want Gabriel to find out this way; I didn't want to hurt him. Guilt burns through me like acid.

His stare bores into me, begging me to deny it. He's always wanted me to love him, and I have always wanted to, so badly. We're the perfect couple after all.  We’re supposed to be the leaders. I should choose Gabriel, I'm
supposed
to choose him, but for some reason it was never my decision. It was always out of my hands. Love chose and conquered me in the name of Shadow. If I can’t be with him then I don’t want to be at all. Like light and dark, there can’t be one without the other.

“Well that isn’t what she told me last night,” Gabriel yells at Shadow and then spits defiantly. “Because what she said last night sounded a lot like “I love you, Gabe” and it sounded like that right before we bonded.” He fixes that smoldering gaze back on me again. I can tell he doesn’t want to believe it and feels proud of himself for turning the argument around a little and making Shadow feel like crap.

Shadow stands up, leaving Gabe still lying in the dirt. I glance at Shadow and can tell that hurt his feelings and at the same time made him madder than hell.

But poor Gabriel just lies in the dirt. He has always treated me so perfect and he doesn’t deserve this. He deserves the truth. And maybe at the same time I can free him of some guilt, after all, I’ve only got myself to blame. The silence has grown uncomfortable and I can’t take that beseeching gaze one second longer. I nod my head in confirmation.
Yes, I am a terrible person. Hate me if you want to. I am scum
. Lying there on his back, head in the dirt, his pained expression is too much for me to bare. He sighs and closes his eyes as raindrops lightly start to fall. He clutches his broken arm as if to comfort himself.

The rain increases and a sob escapes my tightly sealed lips. My composure fails and I let loose tears as if a dam has burst. I can’t tell the difference in the rain and the tears running down my face, and it's an adequate description of the pain that I feel. That there is no rain, it's just all my tears and soon I will drown in them.

Gabriel's booming yell startles me as he jumps up and shoves Shadow in one powerful motion. Shadow, caught off guard as well, flies backwards through the air while Gabriel gets to his feet and releases his wings. Shadow hits the wall so forcefully that the concrete crumbles around him. Gabriel and his majestic white wings run towards him delivering a battle cry that will probably echo through my mind for the rest of my days, just as it echoes off these walls.

Shadow is an excellent fighter; I've seen him train in hand to hand with the weapons that I made him. One of the main characteristics of all
Demon
s is that they're naturally born fighters. However, I know Gabriel has trained with the Guard since he was a toddler and I’m worried. But before I can panic even more, Shadow is on his feet in the blink of an eye, black wings spread and fangs bared.

“You will pay for this, you
abomination
. I will enjoy nothing more than cutting your ugly head from your disgusting body!” Gabriel's voice sounds chilling and utterly evil. For some reason, I don't think I'll ever see the sweet, caring boy he was again.

And it's all because of me
, I berate myself.

They rise into the air together, a blur of white and black feathers and sun-kissed skin slicked with water sloshing off of it. Rain droplets fly everywhere as their wings beat the air to stay up. I wonder if I should hate myself for thinking how beautiful it looks, and wonder if they could ever be friends in the future. They would get along so well if I was never in the picture. But then again, they would never even speak to each other if I wasn’t in the picture. A gleam of silver interrupts my twisted musings and I wonder what it’s from. The realization hits me like a ton of bricks and my eyes widen in horror. Gabriel has a knife in his hands and Shadow has no idea.

“Stop!” I yell. “Gabriel
, no!
”  My throat is scratchy and a little hoarse and I am not even sure if he hears me.

Gabriel's still so in tune to me. He still loves me, and I've hurt him so much. I can see it in his eyes as he glances at me, to decide if killing Shadow is worth it. It is cause and effect. I think he knows he will lose me forever if he kills Shadow. Still, he pauses to weigh the consequences.

“Halt!” a deep voice commands, and the earth rumbles with the movement of feet as the Guard arrives just in time. “Cease immediately and separate!”

I drown in relief as they both land beside each other a few feet away from me. A beautiful shower of black and white feathers dances toward the ground all around us and my eyes follow the black ones to the dirt and watch the rain pound it into the ground without remorse. It’s pretty though.

They’re both breathing hard, chests rising and falling with force. Gabriel clutches the knife so hard his knuckles are white and Shadow’s black
spiky
hair is plastered to his face. A mixture of dirt, rain and blood runs from down his face and she tosses his head to the side to flip it off.
He’s so beautiful
.

I look toward the approaching Guard and see Wraith and Kaia in the front next to the conniving
Overlord
. Kaia looks at me questioningly; she never knew of my love for Shadow. She wouldn't have approved, even though she's my best friend.