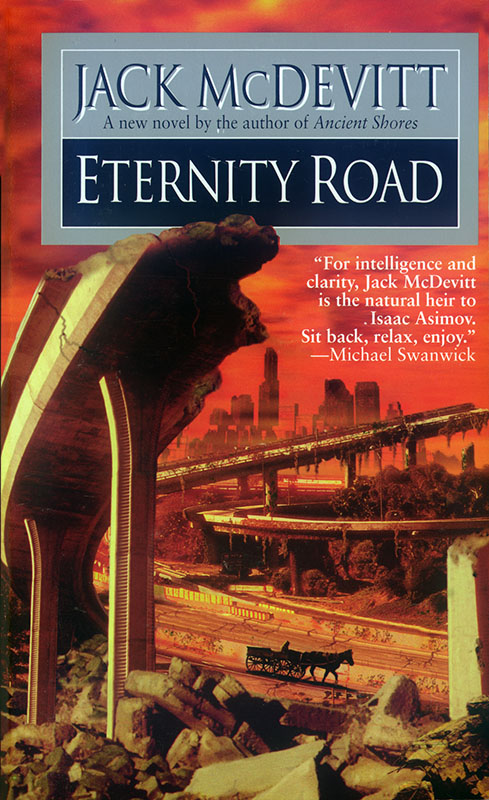 For Merry, Scott, and Chris,
my inestimable ambassadors
to the 21st century

I asked him how far we were from Hartford.

He said he had never heard of the place.

The
boy was waiting in the garden when Silas got…

It is a fond
and universally held notion that only…

The Illyrians
knew the world was round, though some among…

Silas should
have been delighted with the find. He kept…

In an age that
depended on sails and oars for…

The citizens of
the League were not, by and large,…

The young Avila
had loved riding along the banks of…

If you must go,
take no strangers. Take nobody you…

River Road ran
along the Mississippi to Argon, the northern-most…

Unexpectedly, a
holiday atmosphere developed. Inns were strategically placed
along…

The ridge was
matted with leaves and dead grass, and…

They needed
the better part of a day to put…

Rubble filled
the forest for miles. They passed a row…

Jon Shannon
had come to recognize a kindred spirit in…

“It was
something about the disk,” Flojian said. “He got…

They stood on
a platform in the midst of absolute…

“I
don’t think we can just walk away from it,”…

Avila was
lucky: The door shielded her from the worst…

The loss of
Jon Shannon hit Chaka even harder than…

The world kept
trying to turn on its side and…

Five days
after Ann Arbor, they arrived at another city,…

Flojian wanted
to kill them all.

After the
encounter in the grotto, Chaka became more prone…

South of the
falls, the Nyagra divided into two channels,…

They exhausted
a second wedge fighting off another bear. The…

Knobby’s
real name was Mandel Aikner. While Chaka was too…

Knobby was
right. Of the half-dozen captains they were able…

Claver
provided quarters for the Illyrians. In the morning they…

They dragged
the envelope and the gondola into a shed,…

They tried to
close the door, but water poured through…

Abraham Polk described the Plague as caused by an airborne…

Other Books by Jack McDevitt

They came during the October of the World
,

To ensure that men would not forget
.

—The Travels of Abraham Polk

The boy was waiting in the garden when Silas got home
. “He’s back,” he whispered, and held out an envelope.

The boy was one of two who had been employed to take care of Karik’s villa during his absence. Silas was surprised: He had expected Karik Endine to return with horns playing and drums beating. Or not at all.

The envelope was sealed with wax.

Silas tried to remember the boy’s name. Kam. Kim. Something like that. He shrugged, opened the envelope, and removed a single sheet of folded paper.

I NEED TO SEE YOU. TELL NO ONE. PLEASE COME AT ONCE.

The expedition had been gone almost nine months. He stared at the note, produced a coin and held it out. “Tell him I’m on my way.”

The sun was moving toward the horizon, and the last few nights had been cold. He hurried inside, washed up, put on a fresh shirt, and took a light jacket from the closet. Then he burst from the house, moving as quickly as dignity and his fifty years would permit. He walked swiftly to the Imperium, took Oxfoot from the stables, and rode out through the city gates along River Road. The sky was clear and red, fading toward dusk. A pair of herons floated lazily over the water. The Mississippi boiled past the collapsed Roadmaker bridge, swirled between mounds of shapeless concrete, flowed smoothly over submerged plazas, broke against piles of bricks. No one really knew how old the bridge was. Its supports made wakes, and its towers were gray and forlorn in the twilight.

A cobblestone trail led off to the right, passed through a stand of elm trees, and emerged on a bluff. A long gray wall, part of a structure buried within the hill, lined the north side of the road. Silas examined the gray stones as he passed, wondering what the world had been like when that mortar had been new. The wall ended abruptly; he rounded the hill and came in view of Karik’s villa. It was a familiar sight, and the recollections of earlier days spent here with wine, conversation, and friends induced a sense of wistfulness. The boy who had brought the message was drawing water from the well. He waved. “He’s waiting for you, sir. Just go in.”

The villa faced the river. It was an elaborate structure, two stories high, built in the Masandik tradition with split wings on the lower level, balustrades and balconies on the upper, and a lot of glass. Silas gave the horse to the boy, knocked at the front door, and entered.

It hadn’t changed. Autumn-colored tapestries covered the walls, and shafts of muted light illuminated the sitting room. The furniture was new, but of the same style he remembered: ornately carved wood padded with leather. The kind you might have seen in the ruling homes during the imperial years.

Karik was seated before a reading table, poring over a book. Silas barely recognized him. His hair and beard had turned almost white. His skin was loose and sallow, and his eyes had retreated into dark hollows. Their old intensity had dwindled into a dim red glow. But he smiled, looked up from the pages of handwritten text, and advanced through a cross-pattern of pink sunlight with his arms extended. “Silas,” he said. “It’s good to see you.” He clasped Silas and held him for a long moment. Out of character, that was. Karik Endine was a man of cool temperament. “You didn’t expect me back, did you?”

Silas had had his doubts as the months wore on. “I wasn’t sure,” he said.

The boy came in with water and began filling the containers in the kitchen.

Karik motioned Silas into a chair, and they made small talk until they were alone. Then Silas leaned toward his old friend and lowered his voice. “What happened?” he asked. “Did you find it?”

The windows were open. A cool breeze rippled through the room. Curtains moved.

“You mean your information was wrong and you don’t know where it is.”

“I mean I don’t think it exists.” Karik extracted a bottle of dark wine and a pair of goblets from a cabinet. He filled the goblets and handed one to Silas.

Karik shook his head. “No. To you, Silas. And to home. To Illyria.”

While they drank off the first round, the boy brought Silas a damp cloth. He wiped the dust of the road from his face and draped the cloth around his neck. “Feels good.”

Karik’s gaze was distracted and remote. “I missed you, Silas,” he said.

“What happened out there?” asked Silas. “Did everyone get back okay?”

The Mississippi was visible through the windows. Karik got up, looked out at it, and finished his wine. “Everybody,” he said. “I came home alone.” His voice shook.

Silas lowered his glass, never taking his eyes off his old friend. “What happened?”

Karik’s breathing was loud. “Two drowned in a river. Others dead from exposure. Disease. Bad luck.” His eyes slid shut. “All to no purpose. You were right.”

A flatboat came into view. It navigated carefully into a wing channel on the west side of the ruined bridge. Its deck was piled high with wooden containers.

Silas swallowed his own disappointment. It was true he had maintained stoutly that Haven was mythical, that the expedition was an exercise in fantasy; but part of him had hoped to be proved wrong. Indeed, he had lain at night dreaming how it would be if Abraham Polk’s treasures actually existed. What it would mean to find a history of the Roadmakers, to learn something about the race that had built the great cities and highways, what they had dreamed of. And perhaps even to recover an account of the Plague days.

Eleven dead. Silas had known most of them: the guide, Landon Shay; Kir, Tori, and Mira from the Imperium; Arin Milana, the artist; Shola Kobai, the daredevil ex-princess from Masandik. There was Random Iverton, a former military officer turned adventurer; and the scholar Axel from the academy at Farroad; and Cris Lukasi, the survival expert. And two whom Silas had not known, save to shake their hands as they set out on rain-damped River Road and headed into the wilderness.

Only the leader survived. He looked at Karik and knew his old friend was reading his thoughts.

“It happened,” he said. “I was just luckier than the rest.” Pain came into his eyes. “Silas, what do I tell their families?”

“Tell them the truth. What else is there?”

He faced the window, watching the barge. “I did everything I could. Things just broke down.”

“Do you have a list of next of kin?” asked Silas.

“I was hoping you’d help me put one together.”

“All right. We can do that. Tonight, you should invite them here. Before they find out you’re home and start wondering where their relatives are.”

“Some of them are from other cities.”

“Do what you can. Take care of the others later. Send messengers.”

“Get to as many people as you can. Bring them here this evening. Talk to them together. Tell them what happened.”

“What’s to understand? The people who went with you knew there was a risk. When did you get home?”

Silas looked at him a long time. “Okay.” He refilled the cups and tried to sound casual. “Who else knows you’re back?”

“All right. Let’s get it over with. Listen: The people who went with you were volunteers. They understood there was danger, and their families knew that. All you have to do is explain what happened. Give your regrets. It’s okay. They’ll see you’re hurting, too.”

Karik folded his arms and seemed to sag. “Silas,” he said, “I wish I’d died out there.”

They fell into another long silence. Silas picked up a tablet and began writing down names. Fathers. Sisters. Axel’s daughter, who was a relative of Silas’s, having married his cousin.

“I know.” Silas poured more wine. “But you will. And I’ll stand up there with you.”