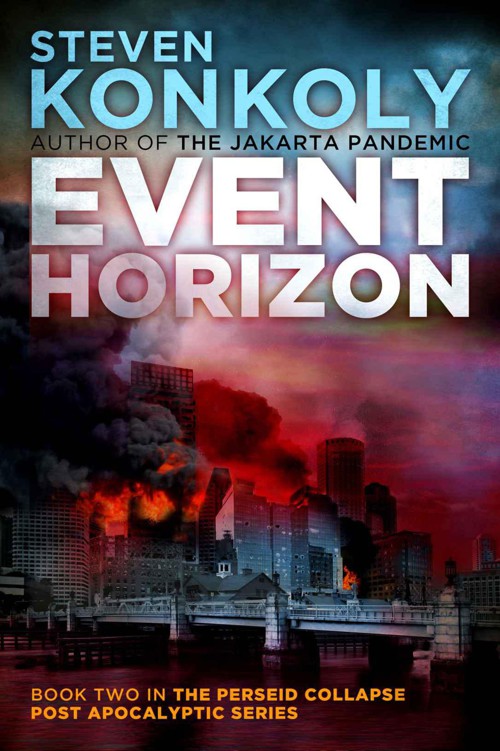 A Novel by Steven Konkoly

© 2014 Steven Konkoly. All rights reserved. Except as permitted under the U.S. Copyright Act of 1976, no part of this publication may be reproduced, distributed or transmitted in any form or by any means, or stored in a database or retrieval system, without the prior written permission of the author.

About
The Perseid Collapse
Series and
Event Horizon

To my wife, Kosia. I carry a notepad with me to capture her thoughts and recommendations—which can arrive, unannounced, at any time of the day. Sometimes I suspect she spends more time thinking about these novels than I do.

To the beta reader crew for another A-plus round of comments, observations and edits. Trent, Nancy, Jon, Bruce and the newest member of the team, Greg. Greg has been a long time reader and generous contributor to my veteran’s donation campaigns. Welcome aboard!

To the production crew. Felicia A. Sullivan—editor extraordinaire. Thank you for the early delivery! Jeroen ten Berge—for producing another killer cover design and devouring the story as quickly as I could write it. Stef Mcdaid—for creating the final showcase product. He takes whatever I spit into the file and “nukes” it into shape. To Pauline Nolet for the exhaustively detailed proofing job. Once Pauline is done, I don’t need to look at it again…and I don’t.

Once again, a special thanks goes out to Randy Powers of
Practical Tactical
. He beta read
The
Perseid Collapse
and
Event Horizon
with a prepper’s eye and provided me with a copy of
Practical Tactical’s Handbook
. Not only did his advice and guidebook help shape the final disposition of the Fletcher’s wide array of survival gear and strategy, it currently serves as the “go to” guide for the Konkoly household. Look for a collaboration between us in the near future. Something along the lines of
The Fletcher’s Guide to Surviving the Apocalypse.

Finally, to the readers, friends and fellow writers who continue to support my transition to full-time writing. None of this would be possible without you. THANK YOU!

Steven Konkoly graduated from the United States Naval Academy and served as a naval officer for eight years in various roles within the Navy and Marine Corps. He lives near the coast in southern Maine, where he writes full time.

Please visit Steven’s blog for updates and information regarding all his works:

About
The Perseid Collapse
Series and
Event Horizon

The Perseid Collapse Series
takes place six years after the H16N1 virus ravaged the world in my first novel,
The Jakarta Pandemic
. Book One,
The Perseid Collapse
, unveils the "event" that catapults the United States into chaos and chronicles the first 48 hours "post-event," as the characters navigate an unfamiliar, hostile landscape to reach their destinations.
Event Horizon
picks up where book one ends, spanning the second 48-hour period. That’s all I’ll say.
Point of Crisis
(Summer of 2014) will open the timeline and scope of the series, addressing some of the bigger picture questions posed by the previous books. As always, the Fletcher’s will be in the middle of the action.

Time in
Event Horizon
is measured in plus (+) or minus (-) Hours:Minutes from the EVENT. Happy Reading!

In relativity theory, an
event horizon
is a boundary in space/time, beyond which events cannot affect an outside observer.

In layman's terms, it is defined as
"the point of no return."

Ryan Fletcher squinted at his alien surroundings. Unnaturally brilliant light penetrated the translucent curtains, exposing beige cinderblock walls and sparse furniture. The glaring view of his dorm room faded quickly, replaced by a soft flickering light. He raised his head a few inches off the pillow to view the digital alarm clock resting on his desk. A dark object stared back. He raised his left hand to his chest and stared at the illuminated dial until it made sense. 4:59.

His eyes eased shut, and he started to drift back to sleep, until the steel bedframe under his thin mattress rattled against the wooden dresser behind his head. Angry thoughts of the “T” waking him every morning of his freshmen year yanked him out of the murky depths, and he sat up, fully awake and pissed off at his room assignment. Nobody had mentioned the fact that the train made stops
inside his dorm room
. The vibration intensified, accompanied by a deafening roar.

“No way I’m dealing with this for an entire year,” he mumbled.

The bed heaved upward, tossing him face down onto the carpeted floor. Distant car alarms sounded. He lay prone for a few seconds, stunned by the violent upheaval. Another massive jolt rocked the room. He needed to get out of here.

Ryan grabbed the bedframe and tried to stand, but the room pitched violently, dropping him to his hands and knees. He crawled in the darkness toward the door, tumbling sideways into the wooden dresser beyond his bed as the building swayed. Ryan scurried into the small vestibule next to the door moments before both of the room’s heavy, wooden dressers crashed to the floor. He leaned his back into the cold cinderblock wall and pressed his bare feet against the opposite wall.

Adding and releasing pressure on his legs to stay in place, Ryan moved with the building, hoping the walls didn’t collapse. Not that it mattered at that point. The building was nearly fifty years old, and if the interior walls failed, rescue teams would be lucky to find any of them alive. He dug his feet into the wall in front of him and closed his eyes. He was on autopilot, too disoriented and terrified to put any effort into anything beyond his immediate survival. He knew that he should be sitting under the doorframe, but he couldn’t convince his body to give up the stable position he had established between the two walls.

Moments later, the shaking abated, and the thunderous rumble yielded to distant car alarms and screaming. Ryan stood on wobbly legs and braced himself against the walls with both hands, taking deep breaths to fight the nausea. A strong campfire smell drew his attention to the flimsy curtains flapping gently through the jagged remains of the window. A wave of dizziness struck, buckling his knees.

Bright yellow and orange light danced against the room’s dark interior, arousing his curiosity. He had to see what had happened outside of the building. Testing his legs, he edged out of the vestibule and stopped in front of the fallen dressers. Glancing up at broken windows, a flash flood of rational, analytical thoughts overloaded him.

He tilted the top dresser upward, letting all of the empty drawers fall to the floor as he heaved it against the opposite wall. His dresser was next, but he took care to keep the drawers pushed firmly shut. Ryan dug through the dresser and quickly replaced his athletic shorts with jeans. Thick wool socks covered his feet, followed by a pair of well-travelled, dark brown hiking boots. He saw no sense in cutting his feet on broken glass before he left his room. He stepped over to the window and brushed aside the flimsy curtains. Flames engulfed western Boston, extending as far as he could see from his sixth story window.

Ryan stared at the inferno, transfixed by the enormity of the blaze. Pyres undulated and crackled, draping the city in a dancing blanket of fire. He scanned for wreckage on Commonwealth Avenue, desperate for clues to explain the apocalyptic scene. He’d expected to see the tail section of a commercial airliner or a colossal crater, but the street looked untouched. Even the buildings across “Comm Ave” looked undamaged. Something was off, but he couldn’t bring it into focus. He followed the fires lining Granby Street, tracing them toward the Charles River and beyond.

The city’s confusing grid of tree-lined streets had been brought to life by the flames, leaving the structures intact.

Could a solar flare do this?

Ryan had no idea. He started to pull away from the window, but stopped.

That can’t be right.

He checked his watch again. 5:01. Sunrise was still an hour away, but the lights were out across the city. Despite the near daylight conditions created at street level, he couldn’t identify a single light—anywhere.

Ryan fumbled for the desk lamp.
Click
. Nothing. He swiped his smartphone and wallet from the hutch and sprinted to the vestibule, trying the side-by-side switches. The room remained dark.

This has to be a solar flare. What else could knock out the electrical grid and set fire to the trees?

Another thought crossed his mind, but he dismissed it. They would have been hit by the shockwave already if it was a nuke. Either way, his only mission at this point was to reach Chloe and figure out what to do next. Stay in Boston or trek north? He lifted a blue, twenty-gallon plastic storage bin from the closet floor and dropped it on his bed.

The bin had been the last item to leave the car, hidden under a blanket by his dad. Ryan had nearly refused to take it up to his room. Of the 21,000 incoming freshmen, he didn’t want to be the only one with a “paranoia pack” taking up precious space in his closet. Of course, that was the point of the bin. Boston University represented a small city of students, most of them completely dependent on the university’s infrastructure for their basic survival needs. With his mom in tears over dropping him off at college, he decided to take it and spare her the worry. Based on what he had experienced over the last few minutes, Ryan was fairly certain that the university’s infrastructure had ceased to exist. The emergency bin didn’t sound so ridiculous anymore.

CARNAL APPETITE by Celeste Anwar
The Path of Destruction (Rune Breaker) by Porter, Landon
Friendship's Bond by Meg Hutchinson
Deck of Cards by Johnson, ID
Dark Skye by Kresley Cole
When the Game Was Ours by Larry Bird
The Smoke is Rising by Mahesh Rao
The Creeping Dead: A Zombie Novel by Cardillo, Edward P.
Soulcatcher by Charles Johnson
Spiral by Andy Remic
Our partner