Read Every Vow You Break Online

Every Vow You Break 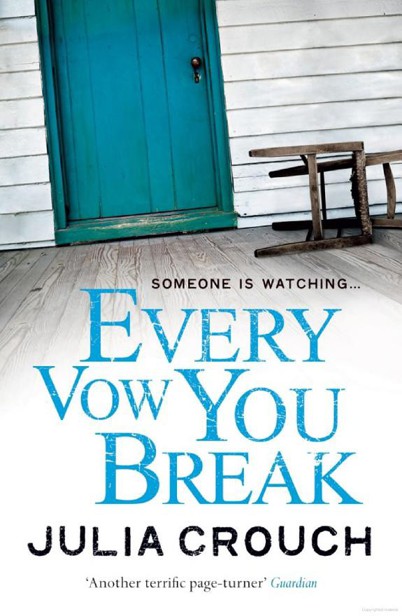 The Wayland family – Lara, Marcus and their three children – is leaving England to spend a long, blisteringly hot summer in Trout Island, upstate New York. Marcus has been offered the lead in a play and Lara, still reeling from the abortion Marcus insisted on, hopes the time away from home will help her to love her husband again.

A chance meeting at the play’s opening night reacquaints the family with an old actor friend of Marcus’s. Stephen is everything Marcus is not: attractive, successful – and interested in Lara. As Lara feels herself increasingly drawn to him she knows it’s a dangerous game she’s playing. What she doesn’t know is that it’s also a deadly one.

Slick, smart, deliciously dark and crackling with suspense,
Every Vow You Break
is a story of deceit, obsession and risk-taking of the highest order.

The right of Julia Crouch to be identified as the Author of the Work has been asserted by her in accordance with the Copyright, Designs and Patents Act 1988.

First published as an eBook by Headline Publishing Group in 2012

Note on the Setting

SHE LIES IN THE SAND, A FULL FIVE FEET UNDERNEATH THE SCRUBBY
, wind-blown surface. Her eyes, once so keen, so well used, are now nothing, staring into nothingness, jammed up against the tiny pebbles and grains which are the last things they would have seen, had there been light.

So much of her is gone that of course she doesn’t know it when the digger lifts the final gritty covering from her skull and the construction worker shouts ‘Stop!’

She is not aware, later, of her desiccated remains being lifted and bagged and transported to be stored in a different, chillier place. Nor does she feel the scrape and cut of samples being taken – parts of her to be dissolved and bottled in the coroner’s labs in an effort to find out the facts of identity, date, time and crime.

She would have been amused, though, by the label attached to her toe and the name of the file opened on Detective O’Halloran’s computer. She had always liked to go incognito.

Detective O’Halloran is dogged. He won’t be letting let the case of Jane Doe go.

FROM THE AIR, NEW YORK LOOKED TO LARA LIKE A CATERING-SIZED
Croydon. As they circled over Newark, the out-of-town Ikea confirmed the illusion. On the ground, as they rolled along the steamy New Jersey Turnpike in their massive hired Chevrolet, the Manhattan skyline exposed its more classic aspect. So grand did it appear in the distance that the entire Wayland family – little Jack apart, of course – joined together for a brief mouth-trumpet version of
Rhapsody in Blue
, an outcome of the pre-trip Woody Allen research.

Lara had to ask Marcus to stop before they got out of the built-up tangle of roads heading north, because she felt sick. She was also bleeding pretty heavily. After she had thrown up her Virgin Atlantic pre-landing ice-cream snack, she sat in the service station cubicle and pressed her brow against the steel coldness of the toilet-paper dispenser.

For the thousandth time, she asked herself what on earth she had been thinking. Marcus had said they should look on it as a miscarriage of sorts. Every part of her body wanted to believe it had been like that.

She looked down and watched the drops of potential leach away from between her legs into the pan, and she prayed for redemption – or at least a stilling of the hurt that had, for the past five weeks, silently twisted her gut. Yet again, she castigated herself for not listening to her own voice more fully, for being a coward and going along with Marcus.

Eventually she rose, cleaned herself up and flushed the toilet. Outside the cubicle, she splashed her face with cold water. After checking in the mirror that she could still muster a smile, she went to rejoin her family. The summer ahead was going to be an awfully big adventure, and she really needed to kick herself into gear for it to do the healing she hoped it would.

She crossed the heat-hazed tarmac of the service station car park and flopped into the passenger seat, glad Marcus had kept the engine and the air conditioning going in her absence.

‘Everything OK?’ he asked.

She turned and gave him the smile she had practised in the mirror.

He shifted the car into drive and they set off north, away from the city. They were completely new to this USA game. When they reached a toll plaza near the New York State line, Marcus had to ask which coin was in fact the requested dime.

‘You’re kidding me, right?’ drawled the attendant, a sweating, toxic-looking woman who seemed to be chemically sealed into her booth.

As the road unravelled before them, the long, long day prepared to put itself to bed, and the fourteen hours they had already journeyed began to make their mark on the family.

Lara turned to look at her three other children. Jack, of course, had slept almost from the moment he had climbed into his car seat, snuggling his sweaty little copper head into Cyril, his constant teddy companion. His big sister Bella cuddled around him as if she were his mother.

Lara could see a long-abandoned version of herself in her daughter. Just sixteen, her smooth black-brown bob greasy from the journey, Bella still held on to the doll-like demeanour that had seen her through childhood. This neatness was in direct contrast to her twin brother Olly, who, tall, gangly and dark-eyed, already had a touch of the wild man about him. He lolled back against the window, possibly asleep too, unfazed by the pounding beats of his iPod earphones, which Lara could hear even across the vast distance between the front and rear seats.

Cocooned amid his two dark siblings, four-year-old Jack looked like a gingery foundling cherub. But that he was the spit of his father, it would be hard to believe he came from the same gene pool as the others. Due to the eleven-year gap between the two births, Marcus’s recent joke was that Jack was the mistake they
had
permitted existence to: their
happy
accident.

Lara turned back to face the road and tried to enjoy the comfort of the car. A whole world stood between its immaculately valeted interior and their beaten, be-littered Volvo back home. She thought perhaps this must be how it felt to be American. Or at least how it might feel to have Arrived. It was enormous, top of the range – an unexpected free upgrade, dropped on them at the Avis depot at Newark. The vehicle she had originally chosen had cost as much as Marcus was willing to spend, and God knew they had to watch their pennies. But even so it would have been really cramped for the five of them, with their suitcases, cabin baggage, Jack’s old buggy – which she thought she had better take in case of extreme heat and long walks – and Olly’s guitar. She had argued for something bigger when she was making the online booking, but Marcus had held fast, even though they both knew he had a lot of conceding to do in the great Reckoning Up that stood between them. She was glad that some unseen hand had intervened to make her wishes come true with this massive Chevrolet.

She wasn’t going to get attached, though. Marcus’s plan was that any hire car would be returned to the nearest depot after a week. The beneficence of the upgrade didn’t change his stance in any way.

‘Something will come up. We’ll bag ourselves a cheap means of transport somehow,’ he said, giving his best, actor-charm wink.

But for the meantime, this big, pearl-grey monster was her treat: a pretence at luxury, paid for by plastic.

Lara stretched her legs into the vast, dark space in front of her and tried to keep herself from nodding off. Marcus turned off the Palisades Parkway and they moved further north, past a series of giant billboards boasting in English, and what Lara supposed must be Hebrew, of ‘Your Complete Vacation Playground in the Catskills’. And then all around them were darkening woodlands.

After another hour, Lara, who was reading James’s directions by the light of the glove compartment, directed Marcus to turn off the main highway. On they went, climbing up into the night, occasionally passing through a dimly lit settlement, slipping along silent streets lined with clapboard houses. They crept over traffic-free crossroads guarded by mysterious, blinking orange lights, which, after some discussion, Lara and Marcus decided must mean ‘watch out’.

The children were all asleep now. Olly’s gentle snoring and the low amber glow from the dashboard made Lara feel like curling up and nodding off herself. Her ears popped with the increasing altitude.

‘Are you OK with driving?’ Lara asked across the chasm between the two front seats.

She reached forward and, after pressing a number of buttons on the large audio console, landed on an Evangelical Christian station. They listened, amused for a while as a deranged-sounding preacher expounded his views on neighbourliness and how the curse of sodomy could be overcome. He diverted Lara until his sermon took a pro-life theme, at which point she changed the channel to something called W-ZEETEE 101, which took them through some country greats, with mercifully minimal country chat. Marcus sang along loudly and badly, and Lara finally gave herself over to sleep.

A strange feeling of stillness interrupted her dreams of rushing through space and time. She opened her eyes to find they were stationary in amongst some tall trees – moonlit outlines stirring in the sky above them. Marcus’s head was thrown back at an alarming angle and he was completely motionless. For a chilling second Lara felt a prickle of adrenaline across her cheeks, but then he let out a sigh and a snore that drilled through the leather upholstery and into her sinuses. He had simply pulled off the road to take a nap. She tried to push her annoyance aside with the thought that at least he hadn’t fallen asleep at the wheel and finished them all off.

The First Day of the Rest of My Life by Cathy Lamb
Blood Rain - 7 by Michael Dibdin
Along Came Trouble: A Loveswept Contemporary Romance by Ruthie Knox
2 The Dante Connection by Estelle Ryan
Scorch Atlas by Blake Butler
KeytoExcess by Christie Butler
The Other Guy's Bride by Connie Brockway
Tiger Eye by Marjorie M. Liu
Barbarian Alien by Ruby Dixon
Flesh and Fire by Laura Anne Gilman
Our partner