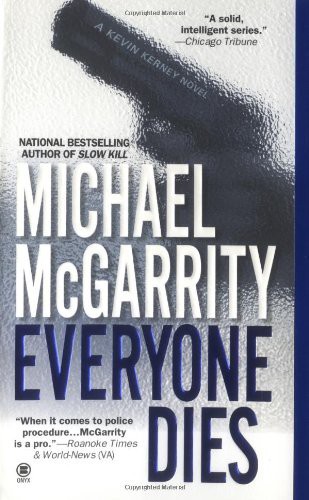 Michael McGarrity
Everyone Dies
Chapter 1
J ack Potter, perhaps the most successful and best known attorney in Santa Fe, had recently attended a gay rights costume ball dressed as Lady Justice. The following morning a photograph of a smiling Potter, wearing a shimmering frock, a curly wig, and holding the scales of justice and a sword, appeared on the front page of the local paper.
Today Jack Potter wore a tank top, shorts, and a pair of expensive running shoes that looked brand new to Detective Ramona Pino. He was faceup on the sidewalk with a bullet hole in his chest. He’d bled out in front of his office across from the county courthouse early on a warm July morning. From the blood trail on the sidewalk, Pino could tell that Potter had crawled a good fifty feet before turning over on his back to die.
Ramona was more than slightly pissed at the man who’d discovered Potter. Alfonso Allesandro had spotted the body as he passed by in his newspaper truck, and had called the city editor on a cell phone before dialing the cops to report the crime. As a result a photographer had hurried over from the newspaper offices a few blocks away and walked through the blood trail taking pictures before the first officer arrived.
Both men were now waiting in the panel truck under the watchful eye of a uniformed officer while Pino worked the cordoned-off crime scene with the techs, searching for shell casings and anything else that looked like evidence.
Little orange evidence markers were placed at the cigarette butts lying in the gutter, at a broken toothpick found a step away from Potter’s body, and next to the small puddle of fairly fresh crankcase oil in the street. One tech dusted the parking meters for fingerprints, and another worked on the door and front porch to Potter’s office.
Ramona inspected the small fenced lawn in front of the building looking for any signs that shrubbery and grass had been disturbed or for fibers, threads, or hair that might have been transferred by contact. Finding nothing, she sent a tech who’d finished taking snapshots of the bloody footprints to secure the photographer’s shoes so a comparison could be made. The photographer opened the truck door, pulled off his shoes, and shot Ramona a dirty look as he handed them to the tech.
Ramona smiled, but not at the photographer. The newspaper’s truck bore an advertising slogan, EVERYONE READS IT, and in black spray paint someone had added: